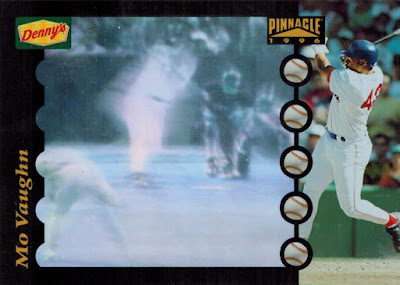 I've always been a bit of a homebody, so I'll admit this quarantine probably affects me way less than other people who crave the outdoors a bit more.

The thing I miss most is probably the ability to add to my card collection at will. If I was itching for new cards and had some money to spend, I could always go to a local card show. Can't do that anymore -- predictably, I'm really starting to miss card shows. I haven't been to Target in weeks, and I know it's not much of a tragedy since there aren't any new cards coming out. Ebay's fine but I don't use it much, and my Sportlots activity is sporadic, at best. COMC and Card Barrel are my two main online card outlets, and with COMC out of commission for the time being, that leaves Card Barrel as my main card supplier of the Quarantine Era.

I just received my second Card Barrel order in the span of a few weeks -- the fact that I received maybe two or three orders from them all of last year should tell you how stir-crazy I'm going for baseball cards right now. 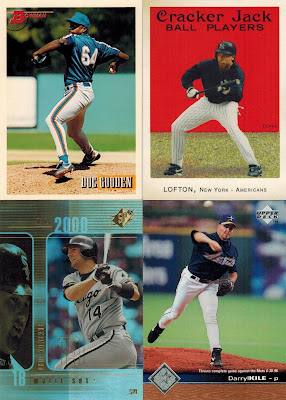 Like the Denny's Mo Vaughn at the top of the post (it's still hard to wrap my head around Denny's giving baseball cards away), these are all new cards for some of my top-tier player collections.

The Gooden fits right in with the whole "wrong number" theme I posted about recently -- apparently he wore #64 in Spring Training with the Mets in '93 to try to recapture some of the magic of his youth. 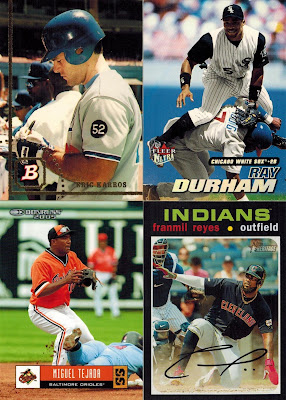 An accomplishment: this order put me at over 9,000 cards for my mini-collections in total!

I somehow missed the Franmil Reyes during my first run through this year's Heritage checklist -- it's a brilliant nod to the similar Vada Pinson PATP in '71 Heritage (complete with a Yankee catcher and all!). 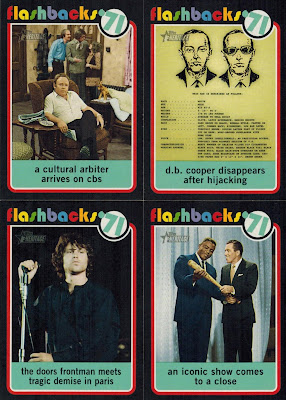 And speaking of Heritage, these four completed my "News Flashbacks" set for the 13th consecutive year.

I've never been much of an All in the Family fan, and I don't love The Doors as much as a lot of other classic '60s bands, but no matter -- it's a pleasure putting another Flashbacks set to bed! 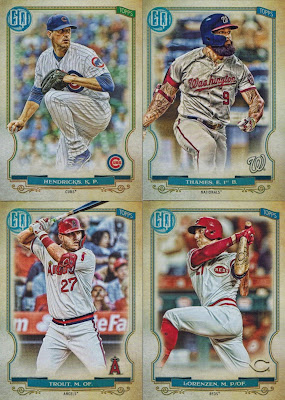 One of the many tragedies of card collecting is that there are cards I want in sets I don't particularly like, but one of the beautiful things about Card Barrel is that I can just cherry-pick said cards for loose change.

The recent two-way player phenomenon has thrown a bit of a wrench in my "pitchers at the plate" mini-collection, but for now I'm still including guys like Ohtani and Michael Lorenzen under that umbrella (not to mention the Lorenzen also features a throwback jersey!). 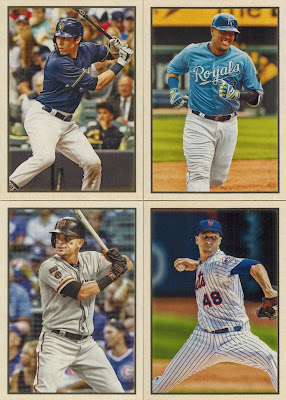 I was so surprised by how much I liked the couple 2019 Bowman Heritage cards I bought in my last order that I pulled the trigger on a bunch more this time.

That Scooter Gennett was a nice diamond in the rough: I completely forgot the Reds traded him to the Giants late last year, and that's the first (and only) card I've seen of him in the uniform. 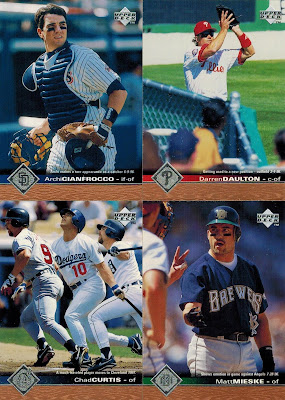 I suppose I'm doing my best to clean out Card Barrel's inventory on '97 Upper Deck -- seriously, I just love this set so much.

Much like the "wrong number" curiosities, I'm also partial to "wrong position" cards -- '97 UD documented the one(!) inning Archi Cianfrocco caught in his entire big league career, as well as Darren Daulton...the outfielder? 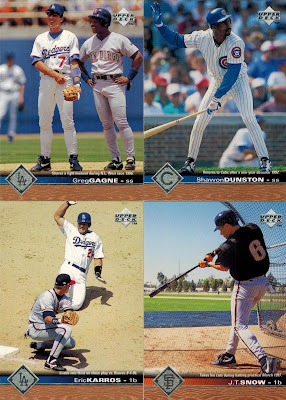 But '97 Upper Deck isn't just about the quirky and weird of the baseball world -- it's also got a ton of just plain nice cards. 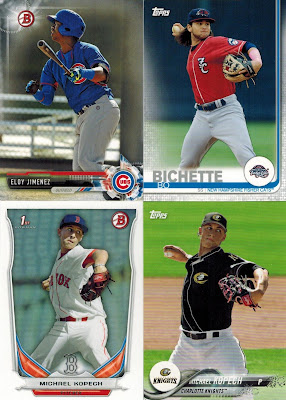 This order had everything from DB Coopers to wrong positions to, yes, zero-year cards -- Eloy Jimenez (sadly) never got to play for the Cubs, and Michael Kopech came to the White Sox in the Chris Sale trade before his big-league debut.

And for some reason, I really like finding early Pro Debut cards of young stars -- I think it has something do with the fact that the minor leagues have otherwise been all but ignored by card companies in recent years. 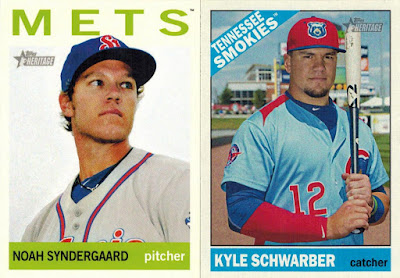 Same goes for Heritage Minors -- that Schwarber was the most expensive card of this order (a whole $1.25!) but absolutely worth every penny. 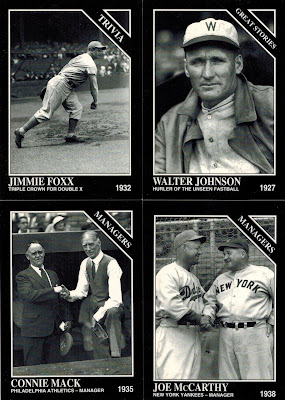 I can't help but smile every time I see Conlon cards -- these were some of the first cards I bought when I first got back into the baseball side of the hobby, and, more than any other set, they've taught me about the game of the past and the guys who played it.

I've since picked up pretty much everything I need from the '91 and '92 Conlon checklists, but I'm still missing a bunch from the later ones -- these are all from the '93 set and feature such old-time greatness as The Big Train and a card of Connie Mack with a cameo from dead-ball legend Big Ed Walsh(!). 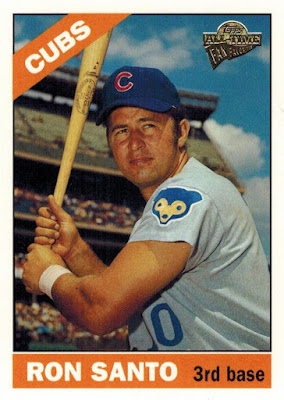 This order featured just a single Fan Favorites card, but boy was it a doozy.

As much as I may miss card shows and such now, I have a feeling that when I do look back on these weird times, I won't so much remember the cards I didn't get -- it'll be the ones that, against all odds, I did manage to get, mostly through survivors like Card Barrel, that stand out and cement themselves in my memory.
Posted by Nick at 6:06 PM

I definitely feel the same about not being able to go to card shows. I'm itching for one!!!

Sweet Santo and his Cubbie patch! I enjoy the News Flashbacks in Heritage. I couldn't wait for 1970 so I could begin adding them to my 70s Pop Culture album, everything but baseball binder. These are sharp on black!!

I can't wait to ship my COMC inventory, it has piled up big time. I running out of things to find on Sportlots, although just checked out my another cart full there and on Cardbarrel too. I've slowed my Ebay down a bit. Yeah, I miss card shows too.

I really like Heritage Minors and Pro Debut, too. And I didn't know much about that 97 UD set until you posted about it recently, but those ARE some nice cards!

Like most, I agree about longing for a card show. I've broken the ice on Sportlots and increased my COMC quite a bit. eBay is hanging roughly at the same level. Great pickups as usual!

Man, I'm gonna need to get that Syndergaard. I do have his 2010 Pro Debut with the GCL Jays which is really cool. Need a DeGrom pre-rookie, too!

Yeah, card shows are the only thing I REALLY miss going out to, at least that happens regularly.

The Doors were stronger than dirt. Just sayin'.

However, my vote goes to D.B. Cooper. Or, as I like to think of him - that drifter I gave a ride to in Sonoma County circa 1995.

Still haven't placed a Card Barrel order... but I have placed several Sportlots orders in the past few weeks.

Love the DB Cooper card. Just watched Without A Paddle a few weeks ago.

Denny's cards were fun. Literally the only aspect of that restaurant that appealed to me. They were not exempt from errors, though, as this Tim Salmon indicates: https://www.comc.com/Cards/Baseball/1996/Pinnacle_Dennys_Instant_Replay_Full_Motion_Holograms_-_Base/16/Tim_Salmon/2118418/Ungraded/COMC/EX-NM

I got a lot of Conlon Collection, as well as Pacific Legends and TCMA, cards when I was younger, but found it hard to get into them save for the most famous players (Jackie Robinson, Ruth, Gehrig, etc.) despite being super into baseball. It wasn't until I started running sim tournaments at whatifsports and resources like b-r.com gained prominence that former players could be contextualized as part of teams rather than just old guys who played a long time ago (when there was no color!). Now, I would love it if there was some massive set featuring pretty much all of the notable players in baseball history.

I need to take my searchlists to cardbarrel again. And I grabbed that Gennett Giants card because I think it's his only one.

Can't wait for our next card show.

Check out isolatedcards.com it’s a new site but a similar idea to card barrel. They are adding new stuff daily.