Don't let the dog near your Card Barrel order 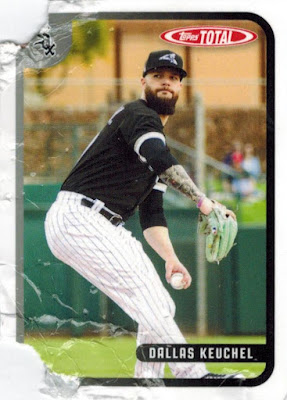 I basically have one rule for my pets: Do. Not. Touch. My. Baseball. Cards.

Aside from occasionally knocking over a rogue stack of cards and getting fur under the scanner lid, the (seven!) cats roaming around the house have generally abided. The new dog my mom recently brought home, however, has already broken my Golden Rule. I received another quarantine Card Barrel order last week, and in the middle of sorting, I got up to do something else and left the cards on the living room table. When I got back a few minutes later, the cards were everywhere, and a few of them were absolutely pulverized. This 2020 Total Keuchel -- among the more expensive cards of this order, mind you -- pretty much got the worst of it.

Needless to say, I was not a happy collector -- and while I've since ordered a replacement copy of the Keuchel, it still hurts. 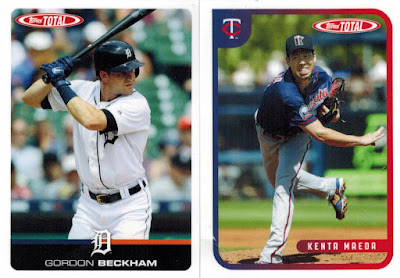 I've always been more of a cat person anyways, and I'm inclined even further that way now.

I don't know how the dog did it, but she went straight for the most expensive cards of the order with these Topps Totals -- note the crease and slight teeth marks on the Maeda. Maybe it's a sign not to spend $1.50 per card on a set that should be for low-end collectors.

Thankfully, the Beckham remained unscathed -- and if you're wondering why I spent good money on a utility guy/fringe big-leaguer, it's because I've collected Beckham since his White Sox days and before this, he hadn't had a Topps card issued since 2016. 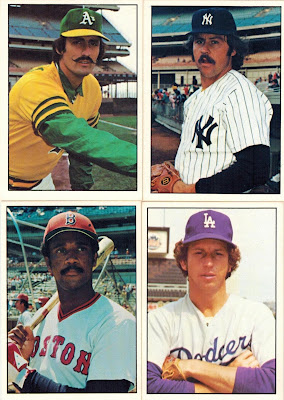 I'm also glad the dog didn't get to the other crown jewels of this order, like these excellent SSPCs.

I still need a few of the bigger names from this set, and I whittled that list down by a good amount here. 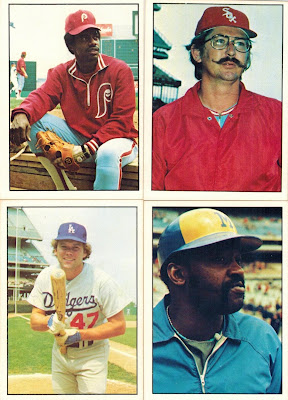 There's a lot of beauty and weirdness in in this set -- often on the same card -- but I thought I had already covered everything down that road of SSPC.

Apparently I was sorely mistaken -- there's still a whole lot more handlebar mustaches and pitchers with bats and scowling sluggers left to chase! 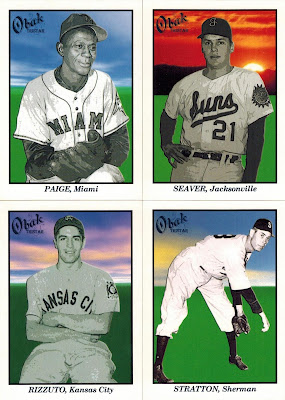 If there was any kind of theme to this order, it was rediscovering sets I once loved that had, over time, faded into the background and/or sets I wrongly assumed I didn't need any more cards from.

Tristar Obak kinda falls into both categories, because I forget how cool these are until I see them all over again. They cover some of the forgotten corners of some of baseball's biggest names (like Satchel Paige's stint with the minor-league Miami Marlins in the late '50s), and the pre-fame days of huge stars like Seaver and Rizzuto.

That's also my first card of Monty Stratton, a former White Sox pitcher whose career ended when a hunting accident forced the amputation of his right leg(!). 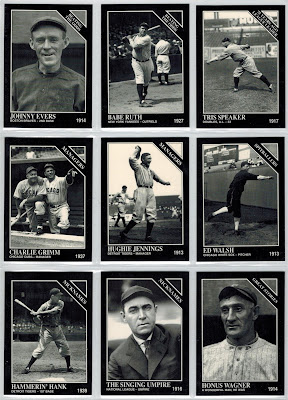 I bought a bunch of Conlons in my last Card Barrel order, but as luck would have it, they restocked 'em with a whole bunch more I needed not long after I received that stack.

These are all from the '93 Conlon set, and once again, I can't help but gush at how much I love these cards. 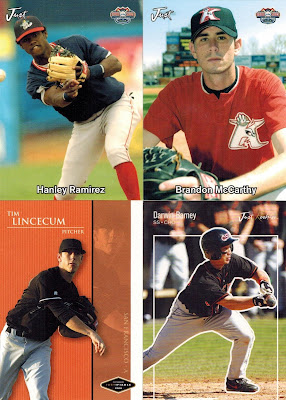 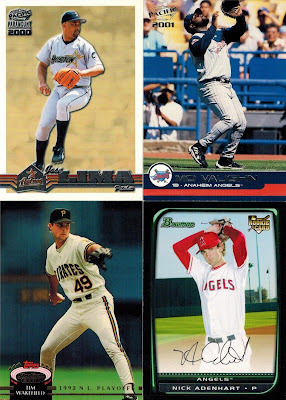 Card Barrel is always good for some random cards of dudes I collect. 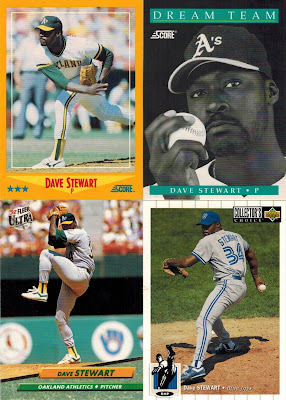 I've been trying to do a lot more cataloging recently, and in the process I realized that I really don't own as many Dave Stewart cards as I should, considering how much I like the guy. 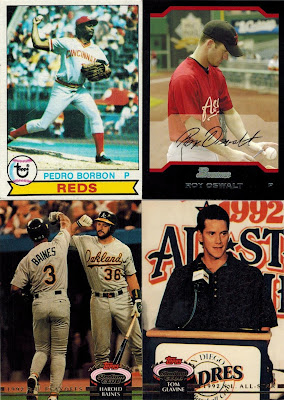 Some mini-collection hits and generally fun stuff here -- I'm not sure how I'd never seen that '79 Borbon before, but it was love at first sight. 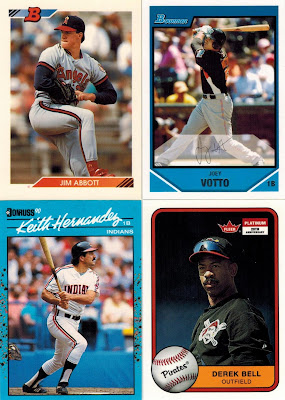 More randoms I discovered during a few of the many Card Barrel rabbit holes I seem to fall into.

It sure seems like '92 Bowman is (paradoxically) one of the more scarce overproduction-era sets, so adding anything from those is always a relief -- not sure if that's because people hoard them with all the big rookies, or if they were actually produced in lesser quantities, or both, or whatever, but I rarely see them in dime boxes.

That's also a new one for Derek Bell's infamous "Operation Shutdown" stint with the Pirates, and egad! -- that's a new Keith Hernandez Indians card I'd never seen before! 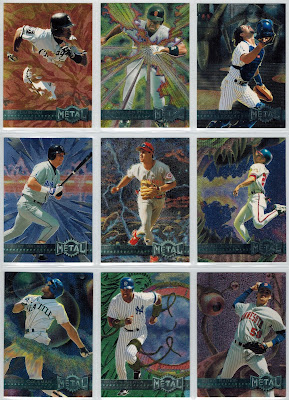 But if there was one unifying force in this order, it was easily the huge stack of Metal Universe cards I bought.

Even though they have no reason to exist, and have absolutely nothing to do with baseball other than the players featured on them, I love these goofy things. It's a whole set of ballplayers imagined as weird, wild superheroes in a gluttony of colorful situations -- even for the '90s, it's out there. I also recently learned that Skybox, the producer of this set, was, at the time, owned by Marvel...and now things make a whole lot more sense.

If there's one knock against these, it's that they don't usually scan very well, but considering the job my scanner did with the pile of '96... 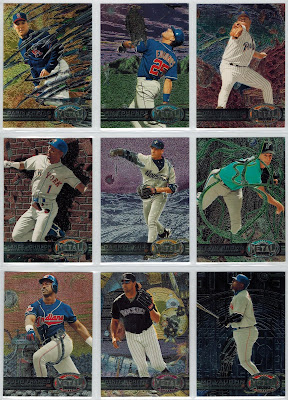 ...and '97 Metal Universe singles I bought, I guess I can't say that anymore, because here they are in all their strange, colorful glory.

A couple of the superheroes couldn't escape the wrath of the new three-pound dog in the house (look if you must), but thankfully most of them made it into my binders unscathed. 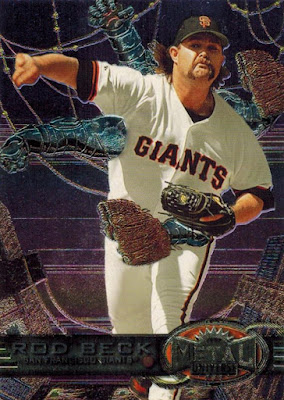 I mean LOOK at this -- it's Rod Beck with four arms!

While the new ones of guys I collect anyways like Shooter and Darryl Kile are definitely cool, perhaps the best part of it all is that Metal Universe me giddy over guys like Kevin Brown and Bret Boone, guys whose cards don't usually excite me very much. That, in a lot of ways, is one of the main jobs of a baseball card set -- get me interested in the cards of players I don't collect, the ones who otherwise barely register on my radar. And while Metal Universe certainly attacks that goal in a strange, fantastic way, it's safe to say they succeed.

Of course, I've already thrown a bunch more cards from this set into my Card Barrel cart -- only this time I'll be sure not to abandon them in a place ripe for a massacre from a tiny dog.
Posted by Nick at 6:09 PM

Those Metal Universe cards are truly hideous. But still glad the dog didn't get them. That's a fate no card deserves. Except maybe something from 91 Donruss.

I can't say my little pal has ever chewed a card thankfully. He's three years old now, so I'd like to think that if he was going to try it he would've done so already!

I dig the Total cards you purchased. Sorry your dog got them. I wonder if anyone has actually purchased the complete set or finished a team set of Total. I’m still like 20 cards away from finishing some Total team sets from the original run.

Dogs are such strange creatures.

Honorable mentions go to the minor league Hanley Ramirez and the '79 Pedro Borbon.

Don't be silly, that's not Rod Beck with four arms.

That's Rod Beck with FIVE arms. Two with gloves, two on the other side, and one coming out of his back.

Gordon is a Birthday Binder guy of mine.

My favorite thing about this post is that I had no idea SSPC’s existed until I read it. Now I have the entire SF Giants team set from that year on the way to me, $11 later. Thanks!

My cat has never destroyed a card, but looks like your doggo got a bit jealous of the attention you spend on your hobby!

I'm totally a dog person. They're so darn loyal and fun to play with. But... yeah... you gotta keep the cards away from some of them. Just the wagging tail alone around card stacks makes me nervous.

Nice batch of cards there. There are a few Conlon cards I'm looking at getting because they fit the Canadians collection.
I agree Minor League cards rule! I love them..
I liked the idea of Total coming back.. I hated the implementation.

Nope, I'm pretty sure that's Rod Beck with SIX arms. Either way, it's a glorious card!
I'm a dog guy, but have two cats because of our "never at home" lifestyle. They stay away from the cards for the most part, but my sorting table is readily accessible to them. They'll step on my cards and knock over stacks with their tails.
No pics of the destructive dog?

Guess doggy doesn't like baseball? Or maybe he does and is showing his appreciation for certain players. Nope the dog just saw something that looked like it might be food and took a big slobbering bite out of it.

Need to see more of those sweet handlebar mustaches.

Those are the best scans I've ever seen of Metal Universe.

Oh no! This is why I don't have animals in the house (unless you count my kids haha) I think I'll have to go back to Cardbarrel soon, they have so many neat singles like these. The Seaver Jacksonville Suns card with the sun setting behind him is fantastic.

Sorry the furry one got to some of your cards, but on the bright side, I sense a new sub-collection starting!

I just placed my first Card Barrel order today mainly because you’ve had good experiences with them and there seems to be a lot of variety to be had on there. If this goes well, it may be my new go to place to get cards online.