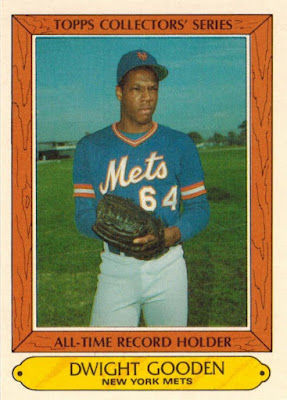 I don't know about you, but I have a hard time remembering jersey numbers.

For whatever reason, they just don't seem to stick in my brain the way statistics and factoids do. In the snap of a finger, I can tell you what Denny McLain's record was in 1968 (31-6) and how many home runs Roger Maris hit the year after his record-breaking "61 in '61" season (33). And while I know and love the weird, offbeat numbers of baseball lore -- Manny Ramirez's #99 with the Dodgers, Prince Fielder's #84 with the Rangers, Al Oliver's #0 during his later years, and so on -- I have to stop and think for a minute if you ask me what number a legend like, say, Carl Yastrzemski wore. (#8, duh.)

Although the numbers themselves don't stick, I do seem to notice when they're wrong -- I've even built a somewhat under-the-radar collection of famous dudes wearing not-so-famous numbers. Dwight Gooden, for example, famously wore (checks notes) #16 for the Mets, but here he is wearing #64 for some reason, probably a shot from his early spring training days when rookies are given laughably high numbers (I even have a different, later card of Doc wearing #64 coming in a Card Barrel order).

But the curious case of Doc is far from the only example. 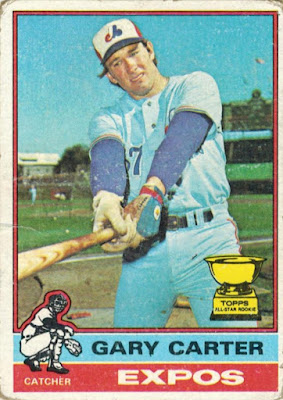 I'm somewhat obsessed with Gary Carter, and I do actually know his jersey number (#8!).

But aside from being a stunning Wrigley Field shot, Carter's '76 Topps card is notable for showing him wearing...something ending with a 7? According to Baseball-Reference (my source for a lot of the info in this post), Carter wore #57 for all of nine games during his cup-of-coffee debut in 1974, which means this photo was already two years old when Topps used it in '76.

Another case of the bright-eyed rookie getting stuck with the number no one else wanted. 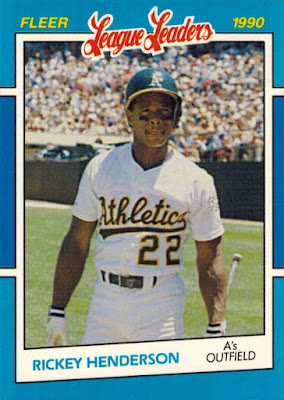 But the archive of weird jersey numbers goes far beyond the common high-numbered rookie scenario.

Rickey Henderson wore #35 in his early years in the league (it shows up on a few of his cards), but he's most well known for his iconic #24. So it makes sense that I hear the scratch of a record needle in my head when this card shows him wearing #22(?!). From what I could find, Rickey wore #22 for one year in 1989, when his iconic #24 was apparently already taken by Ron Hassey, of all people. 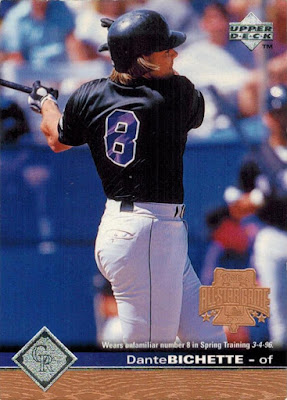 Sometimes card companies come to the rescue of my scattered brain: if Upper Deck hadn't made a special note of it, I'm not even sure I would've noticed the odd #8 being worn by Dante Bichette here, in place of his usual #10. 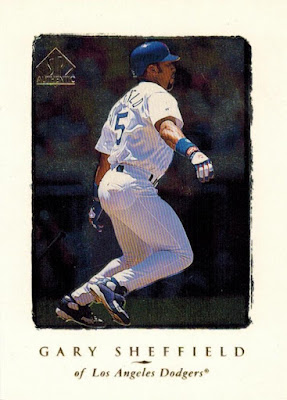 I have no recollection of Gary Sheffield ever wearing #5, but apparently he did during part of the '98 season with the Dodgers. 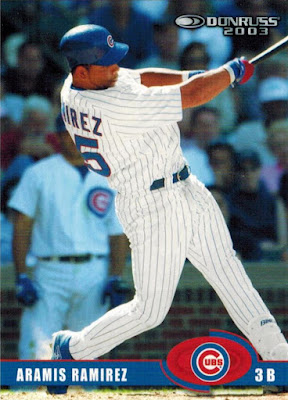 Since I've spent the vast majority of my baseball fandom watching hometown guys, it's a lot easier to notice when something's not quite right with their numbers.

Aramis Ramirez played right in the heart of my Cubs-centric adolescence, so his famous #16 is pretty much emblazoned in my brain. Which makes the presence of a 5 on his jersey here (the only such example I've found on his Cubs cards) so weird.

History bears it out though: Ramirez did indeed wear #15 for a brief time after his trade to the Cubs in 2003, but hell if I remember it. 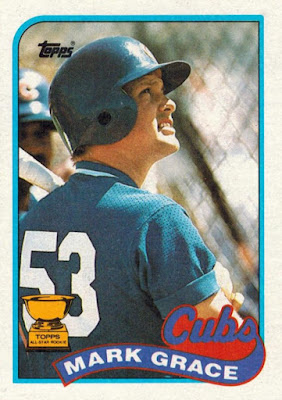 Similarly, here's one of my personal favorites of the wrong number phenomenon.

Mark Grace's '89 Topps card shows him wearing the obscenely unfamiliar #53 -- but unlike Gary Carter, I can't find any record of Grace ever having worn such a number in a major-league game. 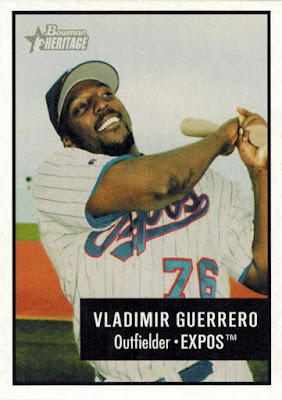 Some wrong numbers are worn by rookies, others by guys who decided, for whatever reason, to switch for a part of a year or two -- but a few others, however, make absolutely no sense. 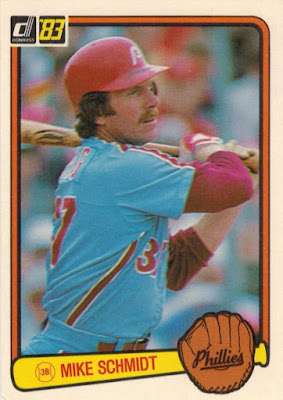 Nor do I know what Mike Schmidt's doing in a #37 jersey that's obviously not his.

By the way, I did some research on this a while back, and the only guy I could find who wore #37 for the Phillies around the time this card was issued was some kid named Ryne Sandberg (which checks out, given the G clearly visible at the end of the nameplate!). 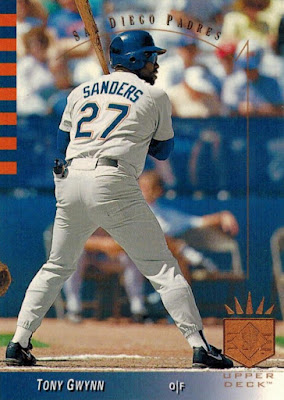 Finally, here's perhaps the most (in?)famous wrong number in the history of baseball cards.

Some weird numbers, like the Bichette or Vlad, can be easy to miss. But there's no mistaking this one: that's Tony Gwynn wearing #27 with some dude named Sanders on the back (actually pitcher Scott Sanders). From what I can find, the story goes that Gwynn forgot his famous #19 jersey at the hotel before this particular spring training game, and thus wore Scott Sanders's for his first at-bat that day, a quirky moment that, for whatever reason, Upper Deck decided to immortalize in their SP set that year.

So yeah, I can tell you in a heartbeat about the card of Vladimir Guerrero wearing #76, and even the one of Mark Grace wearing #53, but if you ask me what number Brooks Robinson wore, well that's something I actually have to stop and think about, and maybe even research.

Wow I never noticed the 83d schmidt before! And I was looking at that card earlier today!

Your power of observation - if that indeed, is a power, - is wild beyond my imagination. I need to pay better attention to my cards. I'm still too young to blame failing eyesight!

That Sandberg/Schmidt card is mind blowing. You my friend, are a savant.

There's a Uni-Watch article from three years ago about that very card and the legwork done to figure out whose jersey it is and why Schmidt is wearing #37.
https://uni-watch.com/2017/08/14/mike-schmidt-hammerin-hank-the-homerun-king

For those who don't want to go to the link, Schmidt's jersey was forgotten on a road trip so he was wearing the jersey of Phillies' batting practice pitcher Hank King.

I actually have a Hank King story that I'll have to share on my blog someday... Unfortunately, that Schmidt card is on my wantlist so I'll have to improvise on the image. :-D

This was a fascinating post - one that I didn't even know I needed! Nomar wearing number 8 the day after he was traded the Cubs is the instance that comes to my mind first, but most of these are much weirder. Definitely don't remember Aramis as anything but 16!

Love this post! Never knew about that Gwynn story.

I feel like I heard that Gwynn story before... but maybe that's just me trying to convince myself that I heard it before, because I'm so embarrassed for not knowing it. I've sure hope I own that card.

Cool post. I need to track down those last two.

For basketball collectors, there's a card of Sam Vincent that has Michael Jordan wearing #12. Supposedly his jersey was stolen before the game.

I can only recall a few of my player collection guys' numbers - Palmer 22, Fisk 27/72, etc. but even most of the rest I have to double check. And forget about statistics. Beyond 715 HR, and even-numbered milestones, I got nuthin'.

I've got a bunch of José Reyes rookie (or at least rookie-ish) cards like that. 2002 Bowman Heritage, 2003 Bazooka, and 2003 Stadium Club all show him wearing 15, while 2002 Bowman has him wearing 28. I bet a LOT of Bowman cards have these oddities, as players are either photographed as spring training non-roster players or photoshopped from minor league or even amateur jerseys. Of course, Reyes is known as number 7--Baseball Reference says that's the only number he ever wore in the majors, but all these photos were presumably taken before he made his major league debut in June 2003.

Other than those of a few basketball players, I've always been bad with jersey numbers as well. I'm especially bad when it comes to those of baseballer's, but it seems like more often than not their numbers aren't visible on cards, so it's kind of hard to remember something if you've never seen it.

Those cards with Schmidt and Gwynn in the wrong jerseys are really something else. I'm going to be keeping my eye out for them in the future.

This was fun...I didn't know about the Gwynn story, and the Schmidt card is freaky...did he forget his uniform too?

My favorite example of this is a Troy Tulowitzki insert card from a few years ago in which he wore #14, rather than his Jeter-inspired #2.