Tales of the minor leagues 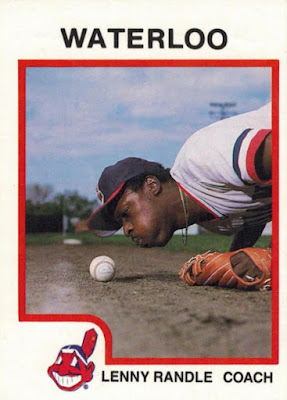 A few weeks ago, during an otherwise innocent prowl through the internet, I discovered this card and knew, right then, that it was destined to belong in my collection.

It's damn close to being the perfect baseball card, or at least the perfect baseball card as I see it. It's weird, it's fun, it's a minor league card of a longtime fan favorite in his lesser-known later years, and, best of all, it features an in-joke only baseball fans would get. The clip of Lenny Randle blowing a ball foul on the Kingdome astroturf was on literally every baseball blooper tape I owned as a kid -- I can pretty much recite the announcer's play-by-play of it by heart. I've probably seen it as many times as other notable moments like Bill Buckner's unfortunate error and Roger Maris's 61st homer.

Never in a million years did I imagine there was a baseball card of the event...until, out of nowhere, this minor league masterpiece (from 1987 ProCards) barged its way into my life. The next obvious question became: HOW DO I GET ONE? I very nearly pulled the trigger on a $7 copy on COMC, but at the last second I decided to consult some other sources, and I'm sure glad I did.

A seller on Ebay had almost a complete run of cards from this set for a buck a pop -- including the Randle! -- and thus one of the most miraculous baseball cards in history was mine. 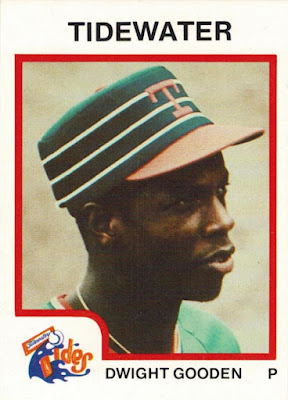 I thought that'd be the end of the story, but little did I know the chain of events that would spawn from the discovery of that single card.

As I said, that Ebay seller had a bunch of dollar singles from this set, and it's not like I'm finding gobs and gobs of 1987 ProCards in dime boxes or anything. And since I wasn't too keen on paying $3.50 shipping for a single card, I decided to take a peek through the other cards the guy had available since he was offering combined shipping.

Unsurprisingly, it didn't take long to find more stuff I needed -- Doc Gooden was an established major leaguer in 1987, but that didn't stop him from appearing in this minor league set during his brief (rehab?) stint with the Tidewater Tides (and their pillbox hats!). 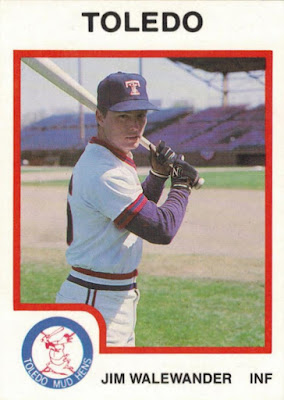 Jim Walewander is an unknown name to 99 percent of baseball fans, but that's what makes minor league sets great -- chances are there's one guy in there who, for some reason, you have some kind of tie to or affection for.

I've already detailed why Walewander makes that list for me. He originally won my heart as the quirky ballplayer who liked the Dead Milkmen...until I discovered that he's actually from my tiny hometown and is in my mom's high school yearbook and everything.

Of course, I've since made it my duty to hoard as many cards of Jim Walewander as possible -- and now I've got an obscure minor league card of him to add to the collection. 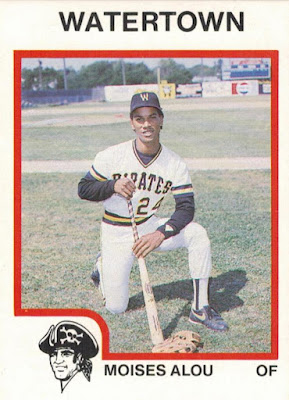 The minor leagues can be a heartbreaking inferno sometimes.

Take a guy like Moises Alou. He was drafted by the Pirates out of college, toiled and fought his way up through Pirates' minor league chain for years, and eventually, finally, made it to the majors with the Pirates in 1990...only to be traded to the Expos after all of two games with them. Two games.

Naturally, this means I'm obsessed with any cards of Moises Alou on the Pirates, but that doesn't mean they can't trigger a slight hint of sadness for the guy. 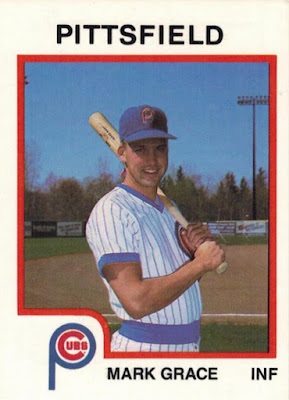 I can understand why the cards I've shown of relatively obscure guys like Lenny Randle and Jim Walewander were only a buck a piece, and I guess I understand the Dwight Gooden too since it's not a pre-major league card or anything.

But I couldn't believe my eyes when I saw the Mark Grace from this set floating out there in the virtual dollar box. Mark Grace sure isn't obscure, and I've had a tough time finding any of his minor league cards at all -- this is only the second minor league Grace I own (of 400+ Grace cards total) and the earliest one in my collection, issued a full year before he'd crack the bigs.

And, oddly enough, I have Lenny Randle to thank for it. 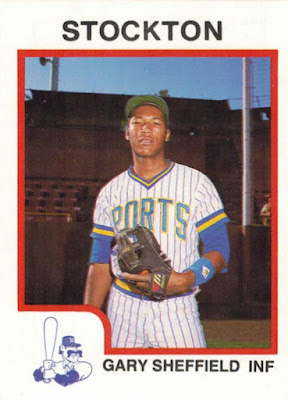 But the story doesn't end there, because I quickly remembered another card from this set I've long dreamed of owning.

Sadly, it wasn't available in the aforementioned virtual dollar box, and all the copies I saw of it online were in the $15-20 range. But then, curiously, I stumbled upon a complete team set that included said dream card priced about the same as the individual copies. I made an offer for way less than I thought the seller would take, but, to my surprise, they took it, and just like that I'd won the complete '87 ProCards Stockton Ports team set for less than the price of a rack pack.

Most fans would think the Gary Sheffield was the card of my desire, and while it's a great minor league gem that'll definitely look nice in my binders, that wasn't what I was after. 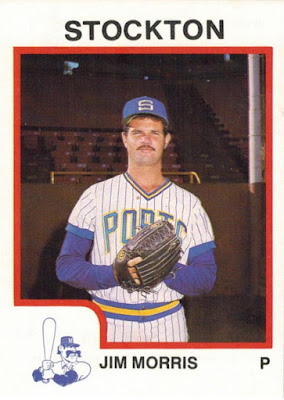 This was the card I wanted.

And so the question: why would I want a minor league card guy whose prior year of stats on the back says DID NOT PLAY - DISABLED LIST? Well, mainly because this guy would eventually make the major leagues...twelve whole years later, and with a team that didn't even exist when this card was made.

Jim Morris might not be a household name, but the movie he inspired is a somewhat notable baseball film and one helluva story. You might know him better as being portrayed by Dennis Quaid in The Rookie, a premier baseball movie of my youth. Morris blew his arm out during a brief minor league stint in the '80s, only to reappear out of nowhere over a decade later throwing upper-90s heat in his mid-thirties. Best I can tell, this is the only card of Morris issued during that first failed stint in the minors, back when he was just another nameless minor league pitcher -- he was never a huge prospect (this card shows him during his time in the Brewers' chain) and didn't come all that close to making the majors. This'll go nicely with the autograph of his I found in a dime box last year.

And so that, all that, somehow managed pack itself into a single, frantic, manic night of my life, all of it randomly spawned by a goofy card I knew I needed to have -- quite the rabbit hole, eh?
Posted by Nick at 6:23 PM

Of course the Randle is the best card, but that Gooden! Sweet!

This is a mind blowing post. All I needed was to see the first card to be happy I clicked this post, but then!!! Wow. That Mark Grace. The Gooden. The Alou. The Sheffield. AND the Jim Morris!? Unreal. Great stuff as usual.

Checking my Alphabetical checklist book I see he did have an 1989 Star minor league card on the Sarasota White Sox card #15.

Always enjoy seeing my hometown park on a baseball card. I have a minor league Moises Alou Watertown Pirates card but it's a different one, and for me, the more attractive team set minor league cards.

That Randle is really fantastic. Kudos for him for being able to poke fun at his own "blooper". That Gooden is definitely high on my wantlist now!

Hey Nick... email me your address and I'll ship out some minor league cards I pulled from my mystery bags. Also have some Cubs for you too.

Obviously, the Randle card is the best of the bunch here, but I'm super jealous of the Jim Morris card. Very, very cool find there!

Minor league cards are great. I probably should get some more of them, but sometimes they're kind of hard to find.

Great haul! I need to add these to my mental wantlist.

I don't know how you do it. You always manage to have some of the most interesting finds.

Nick, I found another player for your zero year tab. Mike Brumley is shown with the Padres on his 1989 Donruss card, but he never played for them.

I just purchased two minor league cards on COMC, both from a team that played in my hometown before I was born. One of them is a guy named Jim McDonald, but he's listed as "Sweet Mac" on the card front. I'm sure I'll go down a rabbit hole reading about him once the card is in hand.

Thanks for an awesome and informative read, i really like that passion for baseball!