Nick here: It gives me great pleasure to introduce a long-awaited moment in the Dime Boxedonia household: Mike's Music Pantheon, Series 2...complete with a guest post from Dad!

Like Series 1, this set is the handiwork of the uber-talented Gavin of "Baseball Card Breakdown" fame, a set of 18 unsung musical heroes, the names selected by my dad and the custom cards put together with the help of Gavin's immense talents (he also sent me a few excellent baseball card trinkets I'll feature in a later post). Dad and I agree that these turned out absolutely fantastic, and that Gavin really needs a job at Topps already.

And so, once again, it's time for me to get the heck outta here and hand the mic over to the one and only Dime Box Dad himself!

Sometimes I forget people who are super well-known to me aren't as well-known in the non-record geek populace!...In the UK and elsewhere, everyone knows Slade & Noddy, while Gram and Roky are revered by any music snob (haha!)... 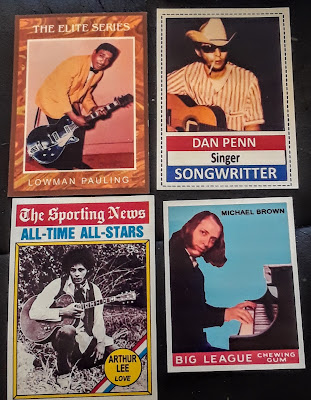 Some architects of sound...Arthur Lee and Love took the dark side of hippie-dom mixed with Bacharach classical leanings...father of guitar-slinging Lowman Pauling of the 5 Royales...the blue-eyed soul pioneer Dan Penn...and Michael Brown, the baroque-rock genius behind The Left Banke...

'80s shoulda-been-huge: the forever-righteous D. Boon, the doomed Bob Stinson...and the all-arounder Ben Vaughn...heard the cover of "In the Street" in the That '70s Show theme before they used Cheap Trick? That was him! 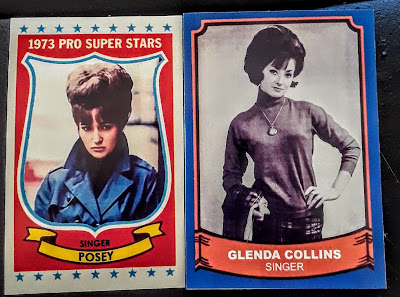 And two lovely and talented gals! Sandy Posey went from studio receptionist to a couple hit singles and singing on some Elvis records! Glenda Collins (from the Joe Meek stable of artists) never had close to a hit, but had one of the great lost singles of the '60s...look up "Something I've Got to Tell You" on YouTube!

Hope ya enjoyed this new set...Nick & I already have ideas for Series 3!...and thanks again, Gavin!
Posted by Nick at 5:47 PM

Glad you like! These were fun to whip up. If anybody else is interested in my music-focused custom cards, be sure to check out my 1991 MusiCards Blog (which covers more than just 1991 MusiCards).

Any Post with Roky,Gram and Willy is ok in my book. Great job Gavin

I've said this before, Topps you need to employ the talents of the G-man!

I hadn't heard that Glenda Collins song. It's quite good. Oddly one of the discs that's coming up in my (huge) queue of albums I've downloaded to listen to is the Honeycombs' All Systems Go, also a Meek production, which had their version of the same song.

As I mentioned on Gavin's music blog, I'm a huge fan of Michael Brown and Roy Wood.

These are so awesome! The 1976 Topps Arthur Lee is my favorite. I've said it before... and I'll say it again. Gavin needs to take his skills to Topps. If he produced a set like this for musicians... online exclusive or not... I'd buy it.