The Dodgers and me 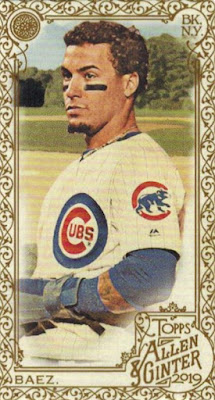 If joining the card blogs has changed my view of one team, it's the Dodgers.

Growing up a bus ride from Wrigley Field and a train ride from Sox Park, it's easy to see why the vast majority of my baseball energy has been spent on hometown teams. The few baseball-loving friends I've had over the years were either Cubs or Sox fans, and 99 percent of our baseball conversations involved them. I still consider myself a fan of some non-Chicago teams (A's, Angels), and I've gone through brief dalliances with others (Rays, Nationals), but the only teams I still really follow on a day-to-day basis are the Cubs and Sox.

And while being a part of the blogosphere has opened my eyes to all the different fandoms out there -- and the reasons and histories behind those favorite teams -- one team seems to so obviously stand above all around here, and that's the Dodgers. 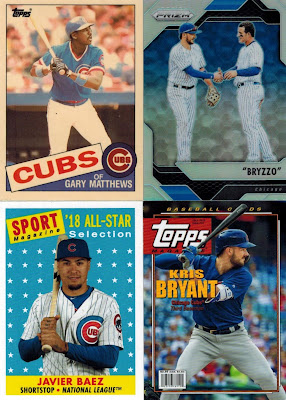 Many of the first blogs I followed were devoted to the Dodgers -- the main one you probably know, of course, is run by Greg of the legendary "Night Owl Cards."

I had little more than a passing interest in the Dodgers before I started this blog -- my mom's not a huge baseball fan but the Dodgers are her favorite team, and I would check in on them now and then because of that. But reading posts about the Dodgers from Greg and all the others has helped me appreciate their history, which, in turn, makes me more interested in the team on the field today. And there's certainly no shortage of Dodger blog reading out there. There's so many Dodger blogs, in fact, that I've kinda lost count -- I can think of at least seven or eight Dodger bloggers that I've read/traded with over the years.

Greg's was the gateway to Dodger blogs for me (and blogs as a whole, actually), and we've traded many times during our respective blogging careers -- a career that spans into the present with a wonderful package he dropped on me recently. 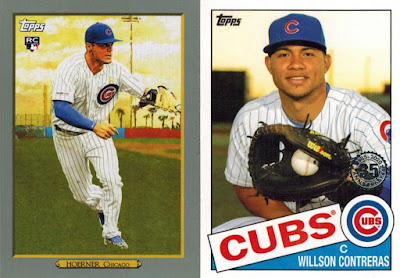 My Dodger collection has certainly gotten larger since I've become a blogger -- the Dodgers are one of the few teams I have divided into four different binders (most get two or three) -- but the Cubs are still my team of choice, of course.

I don't know if you can consider the Cubs and Dodgers rivals, but either way I know that I've given a good home to many of Greg's unwanted Cubs cards, including everything I've shown in this post thus far -- and man do I wish more current cards looked like that '85-style Contreras. 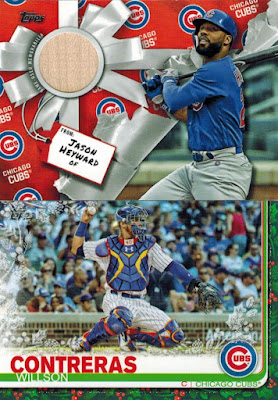 The more I think of it, the more I realize that there's absolutely no reason Topps Holiday should exist -- but, for some reason, I'm glad it exists, if for no other reason than I can say I own a Metallic Snowflake parallel (the Contreras is one of those). 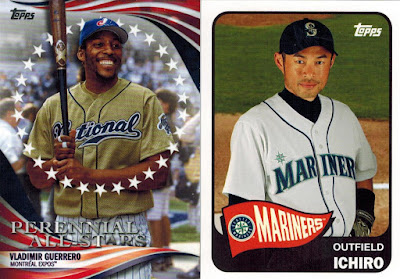 Blogging has also shown me that I'm far from the only collector who hoards cards of Vlad and Ichiro -- I love anything and everything of theirs I receive, like these two excellent inserts from Greg. 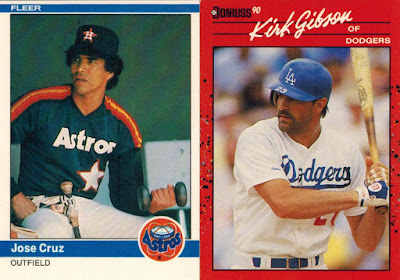 One of the other early Dodger discoveries I made was a blogger known as gcrl who ran a blog called "garvey cey russell lopes" but has now switched his talents to "cards as i see them."

Like Greg, I've traded with gcrl countless times over the years, and still continue to today. A small recent package I received from him included a 1990 Donruss Kirk Gibson which I still somehow needed and was thus added to my Dime Box Dozen list -- I had a feeling it'd be a Dodger blogger who'd help me with that one.

The Cruz came with a question from gcrl -- Do you have a weight-lifting mini-collection? -- I don't, but I can think of at least one other card that'd belong to it. 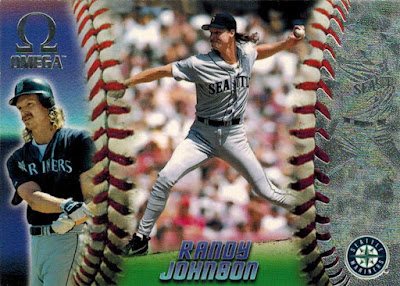 Doesn't matter if it's the main photo or the inset photo -- if a pitcher's hitting on a baseball card, I want it.

I read all kinds of blogs centered around all kinds of teams -- I'm not sure if anyone's ever compiled a list or anything, but I'm sure there's a blog for pretty much every ballclub out there somewhere. Still, for whatever reason, the Dodgers seem to have spawned the largest corner of the blogosphere. Reading about them as often as most of us do around the blogs, I can't help but feel some sort of attachment to them, some sort of personal connection.

So, given that, I say Go Dodgers!...except when they play the Cubs, of course.
Posted by Nick at 6:03 PM

There used to be A LOT more Dodger card blogs. That's been cut in half at least. In fact, many of the team collectors seem to have disappeared from blogs.

Always thought it's cool they went east coast to west!

It's nice to read about a diehard fan who has some kind of appreciation for another team. As a (LA born-and-raised) Dodger fan, I've always been so impressed with the Cubs fan base. For so long the Cubs had this "Loveable Loser" reputation along with so many loyal fans. Back when I used to work at Dodger Stadium, I was told that among opposing team's fans, the Cubs, Mets and Giants outnumbered the rest. Because of the fans loyalty to the Cubs, the Cubs are my third favorite team (behind the Dodgers and Angels). Very refreshing article!

Always fun to trade with you Nick. I probably have another two dozen of those Gibson cards if you need more.

The Dodgers and Cubs are probably my two favorite NL franchises. One of them is way overdue to win a World Series ;)