Never too young for nostalgia 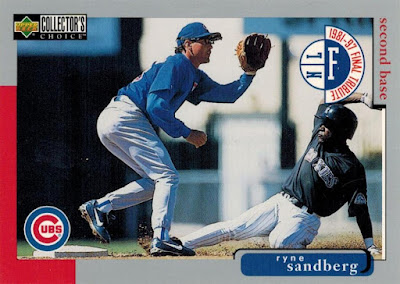 Is 28 too young to be nostalgic?

I used to think so. Nostalgia is a concept reserved for people born way before 1992...or so I thought, because I realized something a few days ago. As a younger collector, I basically ignored cards of '80s and '90s stars, but as I've gotten a bit older, I've begun to right that wrong by chasing stuff of Ryne Sandberg, Tony Gwynn, etc. They've quickly grown into some of my larger and more enjoyable player collections as of this writing.

But I never really stopped to realize why I started wanting their cards all of a sudden. And, you know, I think it might have something to do with nostalgia. While I don't have many clear memories of their playing days, guys like Ryno and Gwynn were winding up their careers right when I was getting into baseball. They didn't seem "old" enough to treat as legends, but at the same time I didn't get to see their prime the way I did with Ichiro and others as a kid.

It was a weird middle ground that basically led to me all but ignoring their cards -- which of course wasn't the right decision, but I can see how it happened. 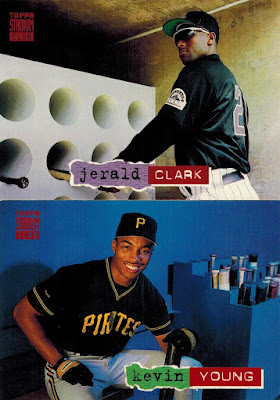 As we turn the page into a new decade, I think I'm starting to see why guys like Ryne Sandberg appeal to me more now -- I am, dare I say, nostalgic for them.

I've had 20 years of ignorance to make up for here, and thankfully frequent trade buddy Bob of "The Best Bubble" helped close one of the many gaps in my newfangled Ryno collection with that Collector's Choice final tribute at the top of the post, a sunset card and a onetime Dime Box Dozen suspect. One down, a bazillion to go.

The cards in this post cover a couple different packages Bob's sent me recently, and I know he's long been trying to get me to start a bat rack mini-collection, which I'm still fighting for now (although I'm squirreling these cards away should the day ever come when I decide to give in). 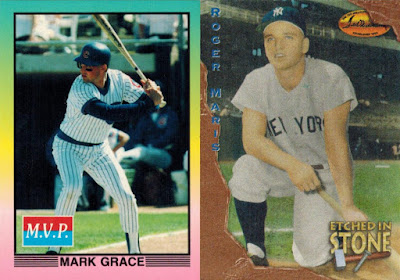 Mark Grace is one of those guys who's kinda transcended any nostalgia I might have -- I may indeed miss watching him, and wish there were more hitters like him in the game now, but I've always collected him.

It's a bit easier to understand why a large bulk of my collection revolves around legends like Roger Maris who played well before my time or my parents' time -- as collectors, I think we're inclined to be awestruck over heroes of past generations we ourselves never got to see, and thus we become fascinated with their cards. 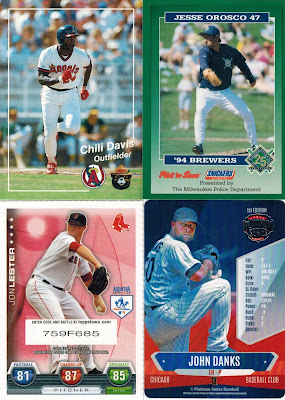 I pretty much missed the golden era for oddballs, but Bob's done a good job of reminding me that there were a good amount of fun off-the-wall cards issued after the '70s. 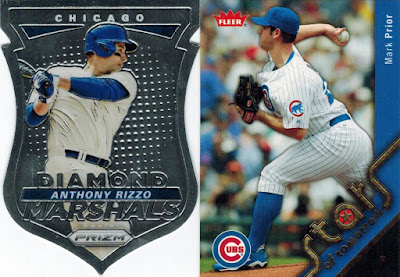 No, we're not quite at the point of getting nostalgic for Mark Prior -- and let's not even think of how old I'll be when I start waxing poetic about the days of Anthony Rizzo. 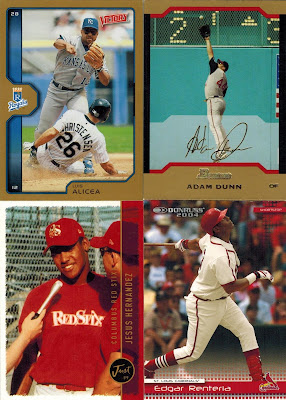 Bob's an All-Star at finding new mini-collection stuff to send me. 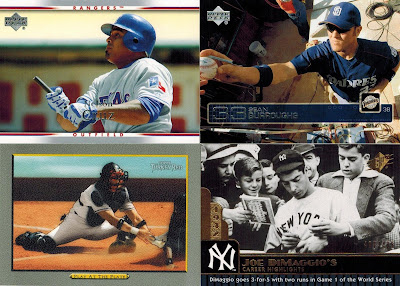 Vertical, horizontal, doesn't matter -- my themes owe a great debt to him. 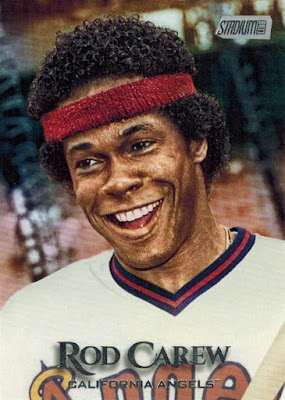 And like the Ryno, Bob hit yet another Dime Box Dozen need with this Rod Carew from 2019 Stadium Club, a card that somehow fell through the cracks when I was scooping up all the Stadium Clubs I needed from card shows (remember those?) late last year.

Nostalgia is a fickle feeling. Sometimes I chalk up my collections of guys like Carew and Roger Maris to a nostalgia for another time, but that's not quite right since I never watch either of them play. I certainly wish I was around to see them, and to enjoy the game as it was played in their times, but there's a difference between longing and nostalgia. What I've started to feel for guys like Ryno, though -- I'm pretty sure that's nostalgia, no matter how suddenly or subconsciously it works. It has to be.

After all, I guess I'm never too young to be nostalgic.
Posted by Nick at 5:53 PM

Surprised you still need any of those Ted Williams Brand cards!

Good post. I need that Carew! Cool looking card that makes me nostalgic! I'll get it someday.

Love that Ryno card. And I don't have it!

You made a post about being nostalgic and managed to find cards from the 2000's to put in it. Incredible.

Voting for the Carew.

Sounds like you chasing Sandberg and Gwynn is pretty similar to me chasing cards of Fidrych and Munson. I may or may not have seen them play... but if I did... I don't remember because I was too young and didn't have an appreciation for the game yet.

"awestruck over heroes of past generations we ourselves never got to see" - I think you hit it. I'm drawn to the Deadball Era before homeruns were in vogue - and well before my time.