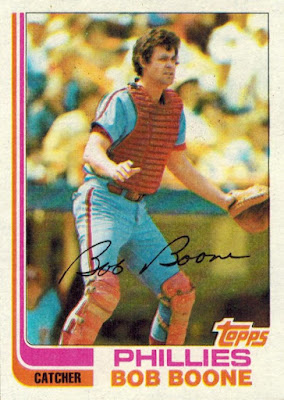 It's a weird time to be a card collector right now.

Card shows are gone, all the usual mid-season releases are postponed until who knows when, and quite a few online sites (notably COMC) aren't shipping stuff out. Of course, I understand why all this is happening, and know it's the right thing to do -- but it feels odd that there's almost no outlets for acquiring new cards at the moment. I'm so used to having cards instantly available at my fingertips that I'm almost unsure what to do when they're not.

I try my best to appreciate the cards already in my binders, and to admire the legacies and stories behind them, but I have to admit that a hefty part of what drives my continued interest in my collection is the fun and thrill of adding new cards to it. 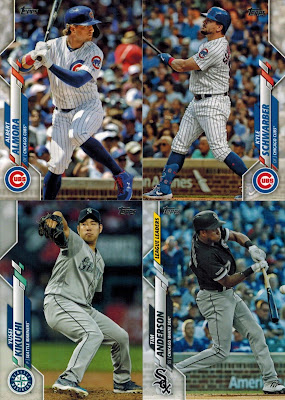 Luckily, there's still at least one source for cards still up and running -- I recently received my latest order from Card Barrel (or, the card site formerly known as Just Commons) that, at least for now, closed the gaps left by empty card shows and barren Target shelves.

I've been using Card Barrel for years, and it's the closest thing I can find to virtual dime boxing on the internet. It's really the only virtual place I've found where buying base cards won't cost you an arm and a leg, since they're usually not overpriced (like on COMC) and you don't have to buy them from separate sellers (like on Sportlots).

And their inventory is large and varied -- I bought everything from that '82 Bob Boone (a former Dime Box Dozen need) at the top of this post to the last four 2020 Topps base cards I needed. 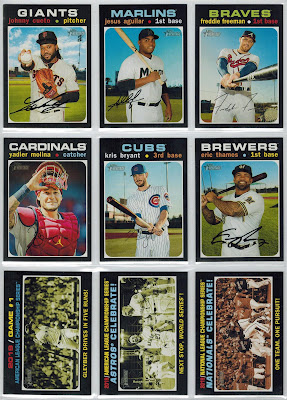 I only have so much money and sanity to spend on packs of Heritage where 90 percent of the cards I get are doubles and/or ones I don't need.

With a few clicks of the mouse, my 2020 Heritage base needs were whittled down to zero (let's not even think of the SPs right now). 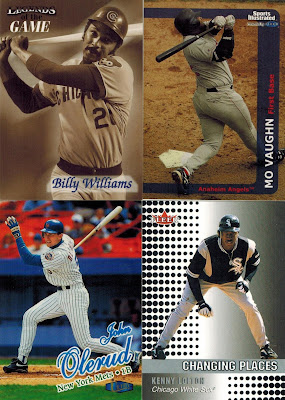 Card Barrel is also a fine place to fill gaps in some of my older player collections of top-tier guys -- dig the Kenny Lofton White Sox sighting! 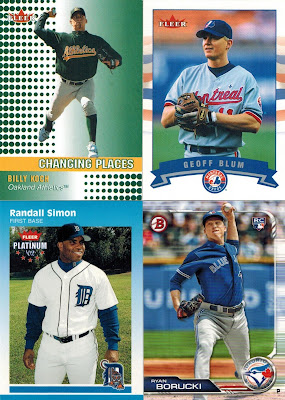 It's also good for a few adds to my smaller player collections, some of which are so obscure that I rarely (if ever) find them in dime boxes.

Ryan Borucki was just another one of the seemingly infinite number of nameless rookies to me...until recently, when I found out that Borucki is somewhat of a local kid, and that his uncle's a client at my mom's work. My mom must've told him of my baseball fandom at some point, because not long later she came home with a ball she'd received from Borucki's uncle, autographed by Borucki himself and specifically signed for me.

And thus a player collection was born. 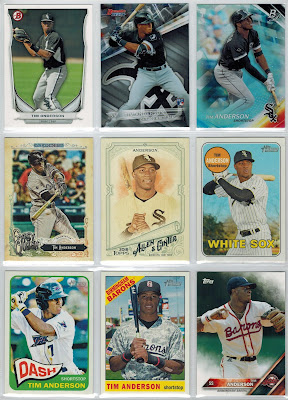 Card Barrel is also a great place to get a jumpstart on a new player collection -- I've done it many times, most recently with the barrage of Tim Anderson cards I received in my last order.

Hometown star, batting champion, all-around exciting player -- hard to believe it took me this long to start collecting the guy. 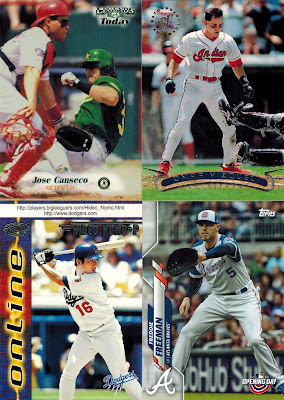 Like the dime boxes I love so much, Card Barrel is a great place to go mini-collection hunting. 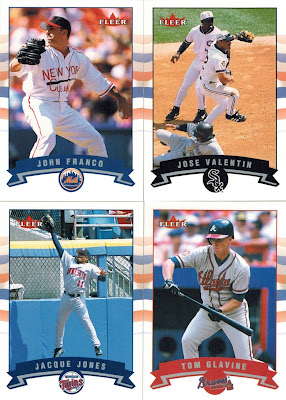 I also like that the home page of the site has links to all the sets they've just added/restocked -- I've been buying from the place for long enough that I've exhausted a lot of their inventory by now, and thus love to see new lists to peruse.

One of those "Just Added" suspects was 2002 Fleer, a set I'd never paid much attention to before, and one that I'm only now realizing is absolutely packed with mini-collection needs. 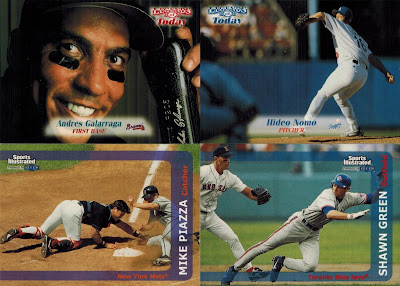 A few of these late '90s Fleer Sports Illustrated sets had just been added as I was browsing the set one night, and I was quickly reminded of how fantastic they are. 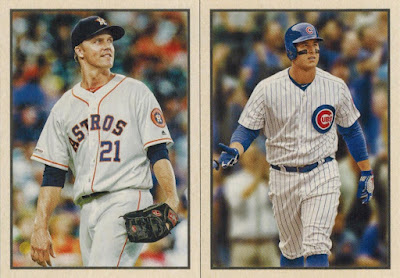 These are my first look at the online-only Bowman Heritage set released late last year -- I wasn't expecting much, but I have to say I like them a lot more than I thought I would after seeing them in hand. 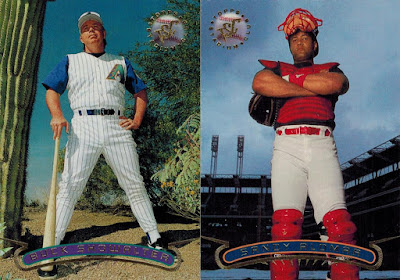 A couple gems from 1996 Stadium Club, which are much appreciated because a lot of late '90s/early 2000s Stadium Club singles are pretty darn hard to find these days.

And no, that's not a typo, and you're not hallucinating -- that's Buck Showalter in a Diamondbacks uniform in 1996, and I imagine it must've been weird for people buying packs at the time and seeing a card of a team that wouldn't even exist for another two years. 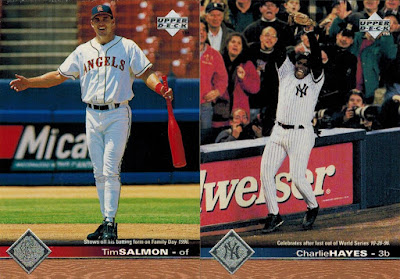 We just covered the fact that I love 1997 Upper Deck and you probably don't, but I'm not done trying to convince you.

I'm especially thrilled to finally have that Charlie Hayes -- can't imagine there's many cards that show the precise moment the last out of a World Series was recorded. 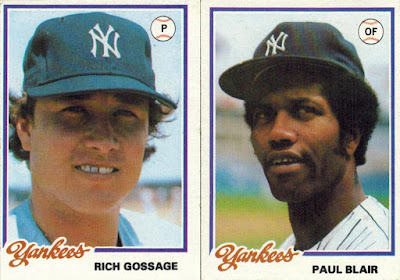 I don't buy much vintage on Card Barrel, but I had to jump at a few of the '78 Burger King oddballs they recently added to their inventory.

These are both great, but I'm especially fond of the Gossage since it's an alternate universe card -- that's a completely different photo than the one featured on his standard '78 Topps card (and a better one, too, given the inclusion of an actual Yankees shot rather than a head-to-toe airbrush job). 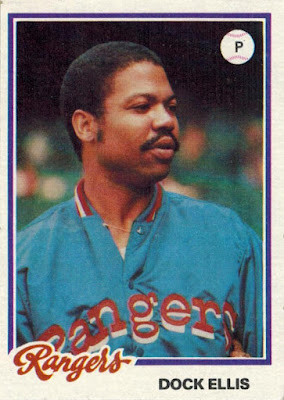 Plus it's certainly not every day I get to add a new Dock Ellis to my binders (especially one as cool as a Burger King oddball)!

Through it all, I wish the best to all my fellow card collectors in these strange times -- if nothing else at least I can take comfort in knowing that there's at least one place still running out there, one place still bringing me the commons I so desperately love.
Posted by Nick at 6:11 PM

Thanks for that info, I'd never heard of Card Barrel. I'll definitely check it out.

E-bay and Sportlots are both working fine ,you might wanna try them.

Just pulled my 2020 TOD and GQ out of my 3 day quarantine from my last CB order.

Do you really pc Geoff blum?

I've been picking up cards of Tim Anderson as well, I even have them set aside and not with all my other Sox cards. I just haven't made the decision (I pretty much have) to officially collect him.

Two things I remember Randall Simon for: hitting the mascot with a bat in Milwaukee during the sausage race and him playing for our city's independent baseball league team about a decade ago. As such he has a card in my Fargo-Moorhead Redhawks collection.

Those last three are my favorites of this group.

The 1997 UD Charlie Hayes card is one of the all-time favorites in my collection, as it is a rare photo that can take me back to feelings from a specific moment in time.

Cool story about adding Borucki to your player collections.
I didn't realize that JustCommons made the transition to Card Barrel... I thought they just went belly up. I'll have to get over there and check it out.

You didnt tell me the Borucki story!..very cool!

And you know when I see a Simon card,I hear Wilbon's voice "go all RANDALL SIMON on him/it!!" Haha!

I'll never forget the Charlie Hayes catch as long as I live.

It's weird having all this time and most of the ways to get cards are dried up. On top of that we might lose the post office!

Normally, I'm totally with you about adding new cards being a part of the thrill... but I'm on this kick where I enjoy cutting back and spending time appreciating the cards in my collection. In all honesty... the past twelve years, I've add a lot of cards to my collection that I've only taken out and seen once. It's time for me to slow down and enjoy all of the cards I've picked up over the years.

P.S. Love the photography on those Fleer SI sets! And those late 70's Burger King Topps issues are awesome.

I haven't ordered anything from Card Barrel yet, but I'll probably get around to it sometime this year.On a different note,that Andres Galaragga card is going to give me nightmares.

Card Barrel is a great place to do some virtual dime boxing. Mehmet is going to get a lot of business from collectors like us who are lost without an LCS/retailer/COMC doing normal business.

I just placed an order on the Beckett Marketplace with their 20% off coupon and it will be interesting to see how quickly it ships under the circumstances. Since I'd just ordered from CB I didn't need more cards right away .. but who know what options we will have in the coming months.

I have a lot of the stadium club years you talked about. send me a list of specific cards and I'll send them your way.

I like that Galarraga. I don't see too many non-Rockies cards of him.

CardBarrel is just great. Only three (minor) things people need to know:
- the site is a bit slow
- there are no scans of the cards so, depending on what you're looking for, you may need another resource to get a sense of the card that's being offered.
- the only time a card I got was not in very good condition happens to be the only time I got a somewhat older (1966) card. Everything else I got was 1991 and later, and they were all in excellent condition. I'd be interested in other people's experience in this respect.