What is a fair trade? 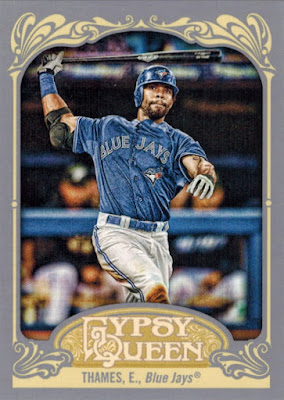 It's a question that has plagued collectors for generations and generations: what is a fair trade?

In grammar school, I once traded an entire tin of cards I bought from the Scholastic Book Fair for a single Mark Prior rookie my friend got from his -- and was subsequently grounded by my parents since those tins didn't come cheap. That probably wasn't a fair trade, no matter how you look at it (especially if you ask my parents). Nor were the hundreds of book-value-for-book-value swaps I made during my forum days, because screw book value.

Through it all, blogging is the one place where I rarely (if ever) have to consider if a trade I'm making is fair. Heck, I don't even really trade much in the true sense of the word anymore: I mostly just send stuff to people, and if they wanna send something back, cool -- but I don't do it with that expectation.

So it's interesting now when I do have the opportunity to finagle a steadfast trade with someone, as I did with Bo of the brilliant "Baseball Cards Come to Life!" blog recently. 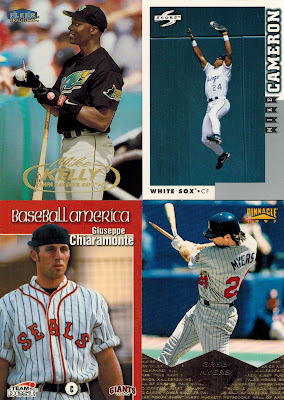 Bo inquired about the possibility of sending him some of the spares I got from Dad's grand antique store find a few months back -- we had a trade agreed upon within the span of a few emails.

And believe me, it wasn't anything approaching the harrowing back-and-forths from my forum years: Bo offered to put together a box full of stuff I collect in exchange for a stack of extra vintage, which sounded good to me since past trades with Bo have shown him to be an All-Star at finding stuff I like. Done.

In addition to the GQ Thames at the top of this post (a Dime Box Dozen need!) came these fantastic mini-collection hits, including a rare minor league throwback from one Giuseppe Chiaramonte, who earns even more bonus points from me for having just about the most Italian name I've ever heard (he sadly never made it to the bigs). 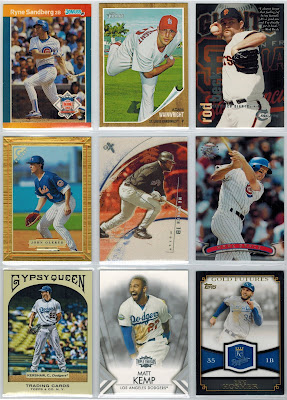 A whole page of new player collection hits -- including many from offbeat brands like E-X and Circa that went to cardboard heaven long ago. 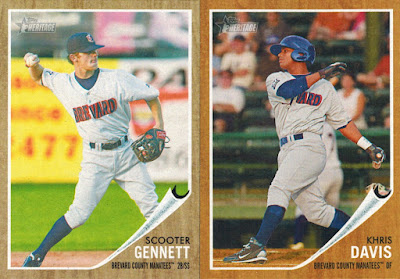 Heck, Bo even inspired me to start not one, but two new player collections (as if I needed any more of those) with the box o' cards he sent.

I have a weird affinity for Pro Debut/Heritage Minors singles of dudes who went on to have big-league success, and these seemed like two sweet cards I could build new Gennett and Davis collections around (sorry, Brewers fans). 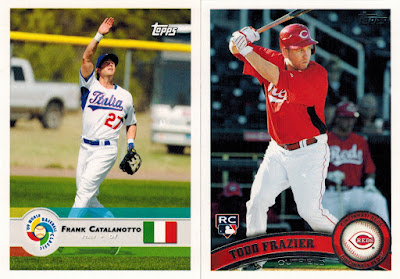 I don't know about you, but I had no idea Topps made a whole set in honor of the 2009 World Baseball Classic, which means there's a whole bunch more Team Italia cards I'll have to chase now.

Also, a Todd Frazier rookie from 2011 Topps Update I sorely needed, which reminds me: have you seen how much unopened 2011 Update stuff goes for these days?! 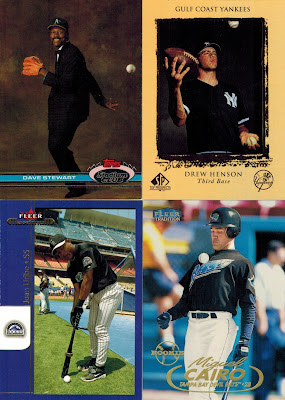 Coming to ABC this spring, the new game show that's sweeping the nation: Spot the Baseball! 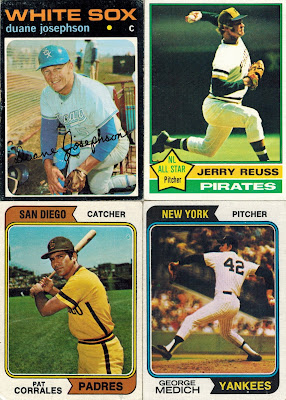 Bo was even nice enough to include a little vintage in exchange for the ones I sent him.

Though I have about 98 percent of the '70s cards I need for my player collections by now, I'm constantly finding prime frankenset fodder I missed in my sad pre-frankenset days, like all four of these. 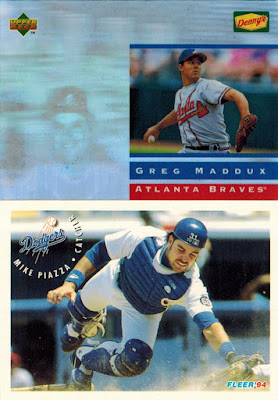 Oddballs! -- including a neat hologram from Denny's, an establishment where I eat once every five years or so (at most). 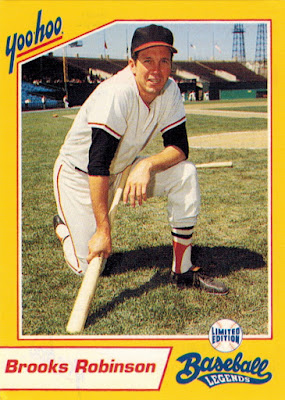 Confession time: I've never tried Yoo-Hoo...but I sure like the cards they made in the early '90s!

All this is only a portion of the box Bo sent in return for the leftovers from Dad's antique-store vintage. I have no clue how the "values" of what he and I received balance out (and don't care in the slightest). All I know is this: I'm happy, and from what I can tell, so is Bo. And really, that's all that should matter.

[for the record Yoo-Hoo is the best]

The last time I had Yoo-Hoo I mixed it with hot dogs, that was a very bad idea. That was circa 1990, and I have not been able to bring myself to even try it again.

I like to trade a roughly equal number of cards. They don't have to be exact- I'll usually send some extras if I find some I know the other person wants after the deal was agreed upon- but I've never turned down a trade, even when I knew it was lopsided against me. I would rather get cards I need than haggle over duplicates.

What a fun bunch of cards! I think I had that Giusseppe card at one point, not sure why I got rid of it if I did own it. Of course, it might just be misplaced in a monster box somewhere.

I have not tried Yoo Hoo since I was a kid, but back then I thought it was gross.

That Jerry Reuss was a big "get" when i was a kid!

"Heck, I don't even really trade much in the true sense of the word anymore: I mostly just send stuff to people, and if they wanna send something back, cool -- but I don't do it with that expectation."
This is exactly my line of thinking.

I remember trading with friends as a kid.We all had different favorite players so I got all of their Cansecos and my buddies got all my Eric Davis,Darryl Strawberry and Mark McGwire cards.We'd get pretty tightfisted sometimes,holding onto each others favorite cards just a little longer to see If someone would budge and sweeten the deal ;)

I like the Fleer Maximum design but it is so fragile.

I think one of the reasons I don't really trade anymore is I don't want to worry about fair trade value. I enjoy exchanging blind care packages and honestly don't give much though to what kind of value I receive. On the other hand... when I purchase stuff on eBay, COMC, or even at card shows... I like to do my research and make sure I'm not overpaying.

Yes, definitely happy and glad you are too. Thanks for the trade and looking forward to more in the future!

I have traded 300-count boxes of largely commons (with some as far back as the 1960s) in exchange for the same.

Now I kind of want a Yoohoo...

I love the fun cards. I hadn't seen any of those before. Lots of great cards.