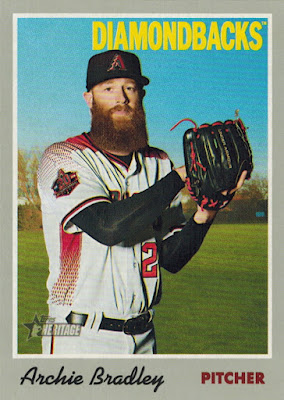 This card, on its own, pretty much sums up everything I love about Topps Heritage.

It's a throwback to a generation past that somehow also manages to stay firmly enmeshed in the present. This year's Heritage, of course, moves into a new decade by paying tribute to the 1970 design. But the Diamondbacks didn't exist then, and massive beards like Archie Bradley's weren't a glimmer in anyone's eye. To some, maybe that makes it fail as a true "throwback."

But to me, it's a brilliant collision of past and present, and a great reminder of why I remain such a fan of current players on retro designs. 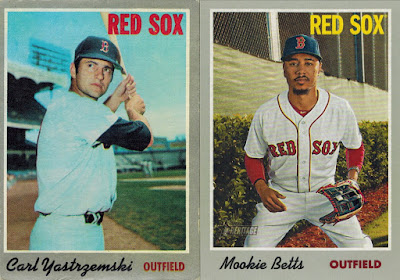 Granted, I'm not a huge fan of the '70 design -- it's in constant competition with '68 Topps as my least-favorite vintage Topps look.

I don't like gray borders and I don't like cursive, neither of which bodes well for 1970 Topps. But I don't necessarily judge Heritage on my feelings toward the vintage design in question since that's kinda out of Topps's hands by now. For me it's more about how true it stays to the original, and I think 2018 Heritage succeeds there.

When looking at them side by side, I find few quibbles with the reproduction -- maybe some slight text oversights but nothing that has me up in arms. 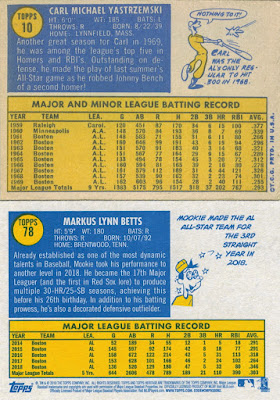 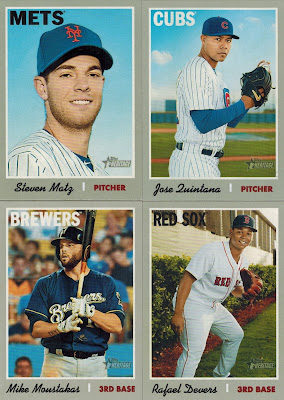 Even though I told myself I wouldn't go as crazy for retail this year, I still found myself on a Heritage manhunt at local Targets and Walmarts these last few days -- they finally showed up at the Target by my house today.

I bought a blaster, a hanger box, and a rack pack, and they made those days of waiting worth it. Though it's been around since 2001, Heritage is one of the few longtime brands that has ceased to feel like old hat. It's still relevant as ever -- I honestly can't imagine collecting nowadays without Heritage in there somewhere.

Better yet, 2019 Heritage seems to try to reproduce the quirks and oddities of the real set better than some efforts of years past -- I pulled a few Matz-like extreme closeups from my packs, which are quite reminiscent of those weird crop jobs on some of the 1970 originals. 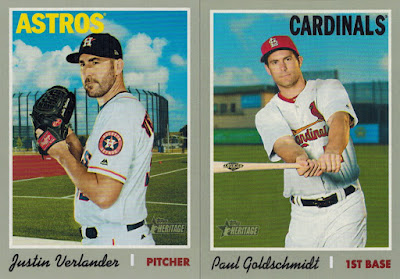 One of the knocks on Heritage is that Topps has taken to backloading the SP checklist with big names, which is akin to a cardboard slap in the face.

Still, I did pull a couple I needed here, including Paul Goldschmidt's first card as a Cardinal -- doesn't look right to me yet. 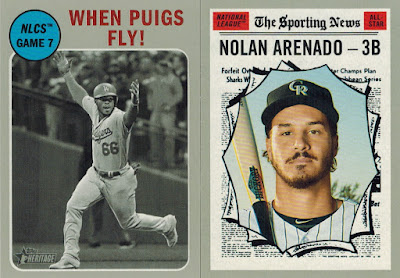 The subsets remain a constant thrill in Heritage -- as does the old-time wordplay on the playoff cards. 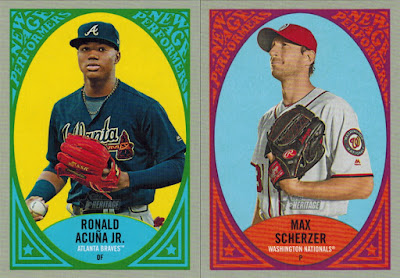 I don't usually pay much attention to the inserts in Heritage, but these properly grooved-up New Age Performers made me take notice. 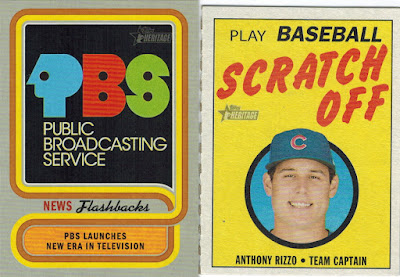 The News Flashbacks single sends me off on my yearly quest to complete that insert set, which I'm looking forward to.

That Rizzo is just plain fantastic -- it even folds out like the original '70 Topps Scratchoffs and everything. 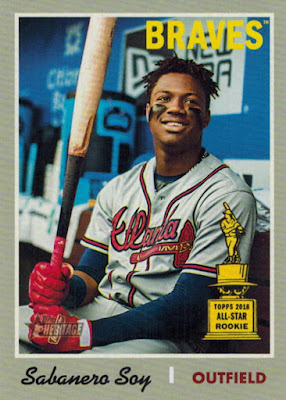 And hey, I even pulled something that might net me a few bucks.

According to the stated odds, these Nickname SPs come 1:2,301 packs(!!!). This Acuna (aka "Sabanero Soy") fell out of the very first pack of the blaster I opened. It's a fantastic card, and I was briefly tempted to keep it, but I can't justify that when it'll likely go a long way in funding the two card shows I have coming up this month.

So there's a first peek into the new decade of Topps Heritage we've stepped into here in 2019 -- here's hoping it'll be a groovy ride.
Posted by Nick at 6:17 PM

For a second I was wondering why I'd never heard of a Braves outfielder named Sabanero Soy..and then I kept reading. Nickname parallels in Heritage? Is Topps actually stealing ideas from Panini/Donruss now?

1 in 2000+ packs is quite a pull though. Hope you get a lot of cash for it and end up with cards you'll enjoy more than Senor Soy.

I've yet to track any down. I like how the New Age Performer cards look kinda sorta like 1969 Topps Football. Nice hit on the "Soy" card!

I just complained about modern Topps inserts in a post I published this afternoon, but gotta admit... I want to pick up some of those '70 Topps Scratch Offs.

"When Puigs Fly" That killed me. Great Acuna pull and great post. Thanks.

I understand your decision to sell the Acuña, but wow, that's an unbelievable pull. Good luck selling the card, and I look forward to seeing what you bring back from the card show(s) it funds.

Congrats on the Acuna pull! That is one sweet card considering the odds. Kinda like getting dealt four aces with the kicker.

Perhaps the Acuna sale will net you a Brock RC? Have fun spending the proceeds!