Requiem for a nightmare 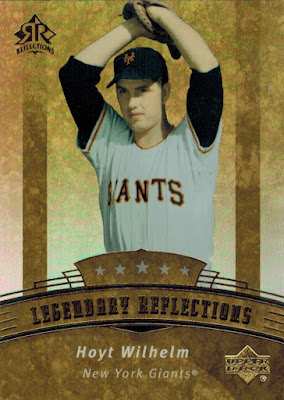 Well, my nightmare came true yesterday: my car broke down on the way to the card show.

It was every bit as frustrating as you'd probably imagine. Middle of a snowstorm, freezing cold, the works. And not to mention my birthday is tomorrow -- which I'll probably be spending picking up my car at a shop far from my house, since after about an hour of driving, it chose to broke down literally a half-mile from the show (which I could've walked, but didn't since my card show buzz was understandably killed at that point).

But as the saying goes: you win some, you lose some. There's another show in a few weeks that Dad and I will be planning on attending (car willing), and it's not like I don't have enough cards to keep me occupied in the meantime. Sometimes I get so swept up in acquiring new cards that I forget I already have ones to love and appreciate.

And hey, I can even catch up on a few long neglected parts of my collecting life -- like cataloging and trade posts, both of which came together in one magical mailer I recently received from the immortal Julie of "A Cracked Bat" fame. 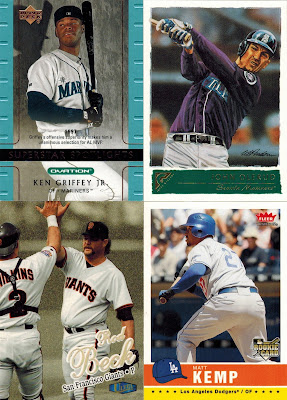 I like to think of myself as a fairly organized collector, but it's hard to believe I've gone about two decades without ever giving much thought to cataloging my collection.

I finished listing out my Hoyt Wilhelm collection not long ago (I'm at 143 different Hoyts!), and I discovered I owned three different parallels of that card at the top of this post...without ever having pinned down the standard base version. In a weird twist of fate, Julie's package arrived literally a few days later, and wouldn't you know it -- there was that very same base Hoyt!

And while I haven't yet cataloged any of my collections of the players above (they're high on the list though!), I immediately knew I needed these four from Julie. 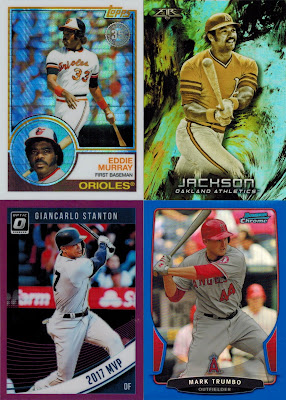 Some shiny stuff of other dudes I collect -- the Trumbo confirms that blue is the best refractor color ever. 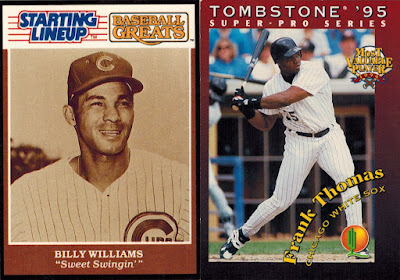 A couple oddballs of Chicago legends, and the thought of baseball cards and pizza (frozen or otherwise) has my adrenaline going already. 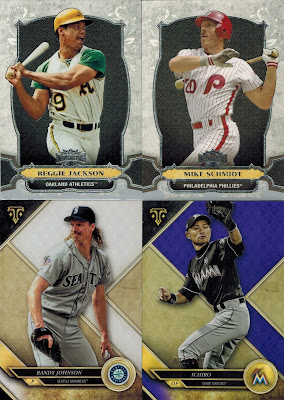 Julie's sent me many amazing packages in the past, and almost all of them have included stuff from high-end sets that aren't exactly common fodder.

I've never opened any Triple Threads (obviously), but I'll certainly take the cards when I can get 'em. 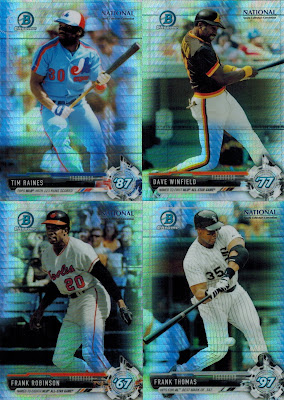 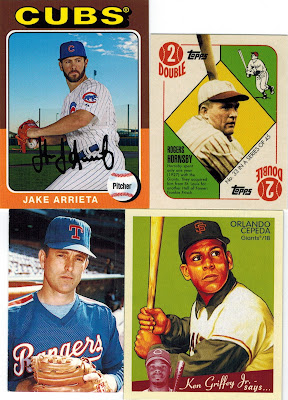 Minis of various makes and models. 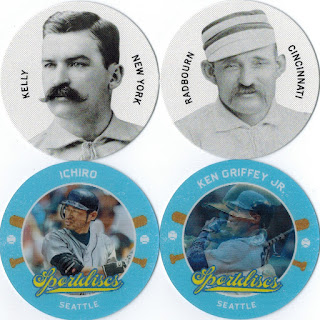 I'm never quite sure what to do with disc-shaped baseball cards -- I can't store them in a binder and they're too small for prominent nightstand display.

But that aside, I'll be darned if these things aren't cool nevertheless: that Radbourn in particular is stunning since it's an extremely rare pre-1900 Short Term Stop, as his Reds career lasted all of one season in 1891(!). 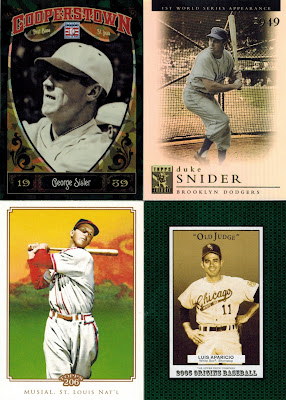 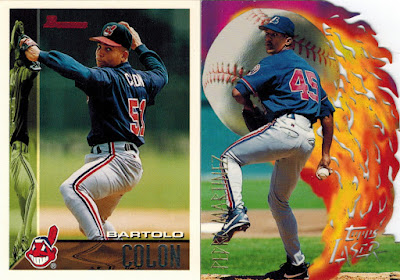 All hail the '90s, the decade that gave us Bartolo Colon rookies and laser-etched baseball cards. 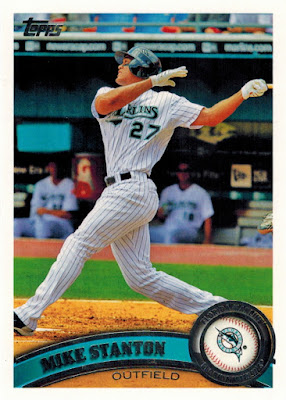 And capping off this Card Show in a Box was this 2011 Topps Mike or Giancarlo or whatever Stanton, a former Dime Box Dozen need!

Like the aforementioned Hoyt, it's a card I owned a parallel of without the base card, and holy heck does that bug me. Thanks to Julie, it's one less headache in what has already been a dastardly weekend of headaches. It gives me a smile at a time in which I definitely need one.

In the meantime, I'll be spending some quality hours with my collection, and praying that yesterday's nightmare never comes true for any of you fellow bloggers out there.
Posted by Nick at 5:30 PM

Very nice stuff!...and we'll get 'em at the big show in a few weeks,buddy!

How come you can't put the discs in a binder? They fit into pages just fine.

Tombstone put out cards when I was in high school? How in the world did I miss that one?

Sorry to hear about your car troubles Nick. Here's hoping things get better for you on your birthday. Happy birthday by the way!

Julie's card packages are always fun to dig through. Always so much good stuff.

When round disk shaped cards are thin enough I just put them in a penny sleeve and then binder them. The penny sleeve keeps them from sliding around.

If they are think like a Topps Coin or a Salida I put them in coin holders and then the coin holders go into a jersey card thinkness toploader. This keeps them uniform with all the other cards in my box.

Always wondered how the Panini disks would fit into one of those.

Sorry to hear about the car, but Happy Birthday Nick!!!

Nick, hate you were out in the weather with your own kind of baseball card breakdown! Hope the repairs don't put you out of card show cash!! It's always great to know you found some cards you needed, like old Hoyt. The Nolan Ryan is an oddity: a mini-sized photo which I came across years ago but decided to pull from my collection. I thought you would give it a good home. It's certainly unique.

Good luck on getting the car going with minimal trouble.

I move to officially put Radborne over Kent Tekulve on the Reds STS roster. Nothing against Kent, but a 19th century Hall of Famer with fewer games has to take it.

Being a Southsider, I feel your pain in terms of the weather. Luckily, I currently work at home. That Colon Bowman is quite an interesting card from a set I forgot all about. One of the few times Bowman got edgy with their design. It almost looks like something from Upper Deck.