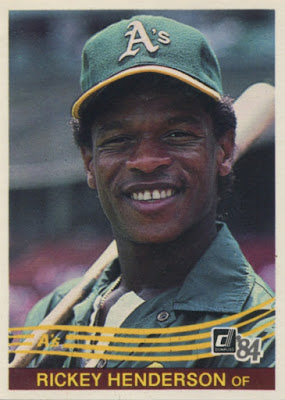 I always feel bad for people who have a birthday right around a major holiday.

I've seen this first-hand throughout my life with my mom, who has a birthday just three days after Christmas. Her birthday doesn't really get celebrated by anyone besides myself -- it usually just winds up becoming an addendum to the family's holiday festivities.

And I can't even begin to wonder what it must be like for people like Rickey Henderson, whose birthday is actually on Christmas (he'll be turning 59 tomorrow). I'm guessing it's...strange, to say the least.

So in order to give Rickey the proper birthday wishes Rickey deserves, I've decided to grant Rickey the spotlight in this week's all-Rickey holiday edition of my Top Five theme. 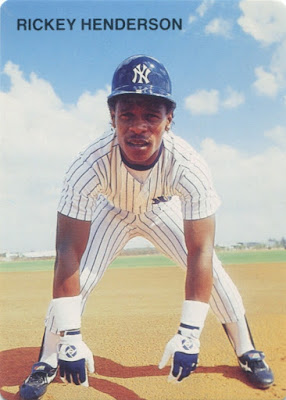 I have little information about this card other than that it has a very Broder-like feel and that I found it in a flea market dime box a few years ago.

The back says the photos are by a photographer named Scott Cunningham and are card-sized mockups of larger 8x10 photos available for purchase.

It's definitely one of the oddest of the oddballs in my collection, and, for that, I love it. 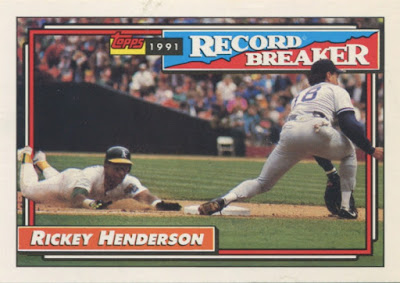 Rickey's record-breaking 939th career steal is shockingly well-documented on cardboard -- I own at least a dozen different cards chronicling the achievement -- but this has long been my favorite. 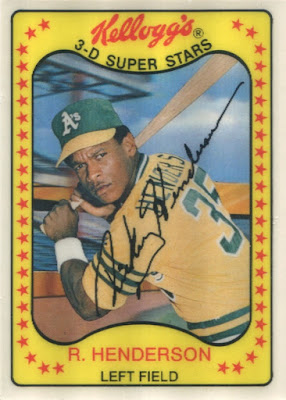 Blinding gold borders surrounding an equally-blinding gold jersey make this one of the greatest Kellogg's cards ever printed. 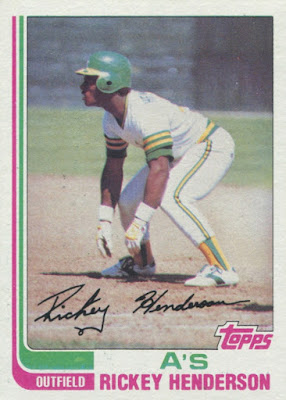 Rickey was on the cusp of stardom when this card hit the shelves, and Topps could not have done a better job at hinting at the fame soon to come.

All he did in 1982 was set the single-season stolen base record with a mind-bending 130 swipes in 149 games that year -- a year that began, for card collectors, with Rickey in a crouch, ready to run at any second. 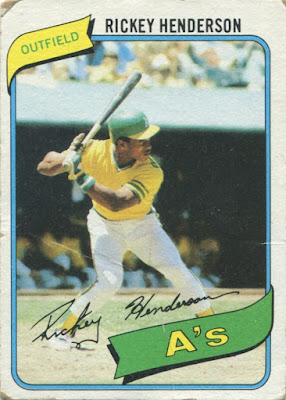 My favorite card of Rickey Henderson is his first card, and it's not much of a contest.

As great as the sheer fact of owning a Rickey rookie is, it's the story of how I acquired it that has lent it so much meaning to me. I dug it out of the lower reaches of a treasure chest at the flea market many years ago, a big trunk filled with (mostly) junk and only partially baseball cards. I was about to walk away from the table with only a few little trinkets to show for my effort when I unearthed Rickey here.

The price I paid for everything I found basically amounted to 3/$1...which means I somehow bought a Rickey Henderson rookie card for 33 cents. To this day, I still don't know how I managed to get away with that.

So, there: happy (early) birthday, Rickey, and since I won't be around a computer tomorrow, Merry (early) Christmas to all my fellow blogging buddies out there.
Posted by Nick at 1:00 PM

My mom's birthday is 3 days after Christmas, too! Poor woman.

Rickey's cards could fill a top 100 without suffering in quality.

A 33 cent Rickey rookie? That's the steal (haw haw) of a lifetime. I managed to find two of them this year through dumb luck in lots. How can people be so cavilier with one of the greatest cards of the 80s??

Well, crap... where were all these Rickey rookies when I was looking for a cheap one? :-D

Great cards, thanks for sharing.

Great list Nick! Glad to see the 82T card receive some love from another blogger. I absolutely love that card.

I love Rickey and that 1980 Topps is definitely a favorite. One of my favorite players. Don't think he's cracked my top 10 but still. Thanks for the post.

You got a Henderson rookie for 33 cents? Why am I not surprised?