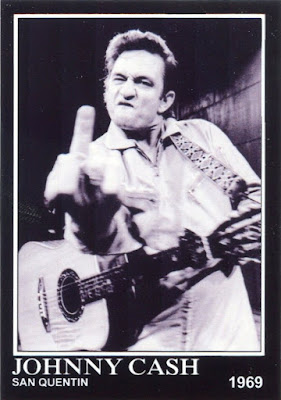 I really don't think it's humanly possible to love all the different facets of one's collection equally. Somewhere, at least for me, certain interests and themes hold sway over others. My collection does indeed operate on a kind of totem pole, as I like to think of it.

That's not to say that the totem pole can't change over time, though. The custom you see above is a good example: The Man in Black is obviously one of Gavin's excellent creations, but it actually came my way via Shane of "Shoebox Legends" fame, who acquired an extra copy and included it with a stack of other goodies he recently sent my way.

I'm not proud to admit it, but I used to write off customs as "not-real" cards long ago -- a troubling train of thought which has since changed (thankfully), as customs now rank high on my totem pole and sit side-by-side with the likes of Topps and Upper Deck in my binders. 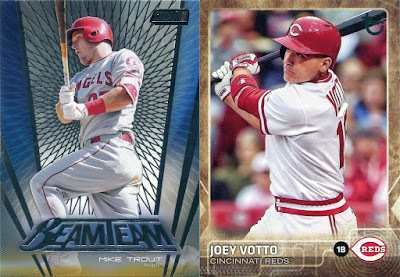 Player collecting is probably where my collection becomes most hierarchical.

I collect hundreds of different guys and, again, there's just no way I could enjoy them all equally. I'd go insane (and broke) if I tried. Though I don't have them written down or anything, I've somewhat subconsciously divided my player collections into tiers.

Mike Trout and Joey Votto are mid-tier guys and probably sit somewhere just above the middle of the totem pole for me -- though the throwback jersey on that special Votto insert from Shane knocks it up a few notches. 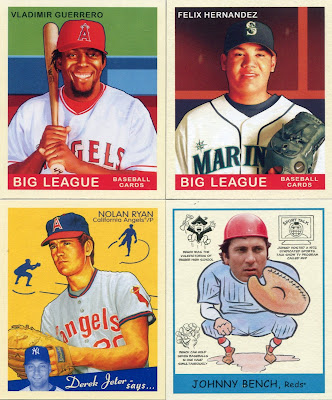 Shoebox Shane (is that his nickname?) also sent along a nice stack of cards to go along with a newer addition to the totem pole: rehashing cards from my youth.

While it's not too high in the hierarchy, I've found myself going after cards from my mid-2000s collecting years more and more in recent months. Case in point: UD Goudey, a fun retro set I busted oh-so-many packs of in middle school.

Even through my computer screen, I can still smell their fake-1930s smell. 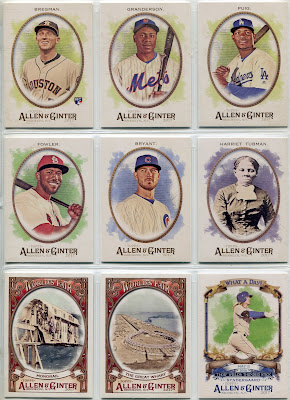 Most of what you'll find on my Set Needs page are just player needs in disguise.

Perhaps it's just something that comes with age, but tracking down cards of guys I need from current products has started to feel more like a chore than a chase. My days of digging for hours through dime boxes of current product are just about over.

Shane gifted me a nice stack of 2017 A&G singles, which put a smile on my face because I've found that receiving current product from fellow traders is much more fun than laboriously accumulating them through packs and card shows. 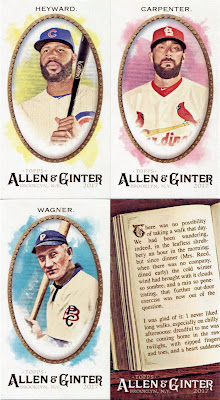 Minis will always rank high on my totem pole -- even minis that document Jane Eyre, a book I absolutely hated in high school (and one I actually only read about 30 pages of, if I'm being completely honest with you). 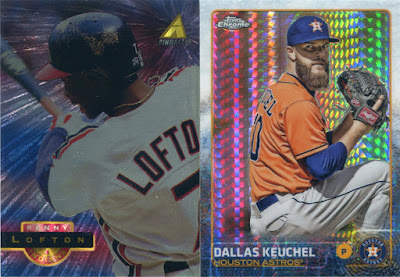 But there's more to the hierarchy than just the players featured on each card.

Both of these guys are already top-tier collections for me, and the added shiny factor of each of these parallels bumps already high-ranking cards up even further on the totem pole. 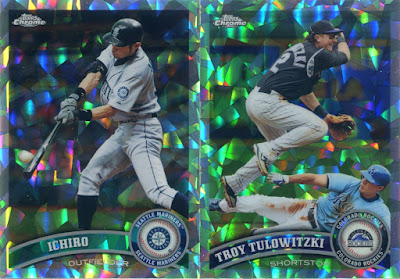 Now we're getting into uncharted waters -- I don't own enough atomic refractors to consider their ultimate placement on the totem pole.

My guess is that they'd be pretty high up because I mean just look at these things. 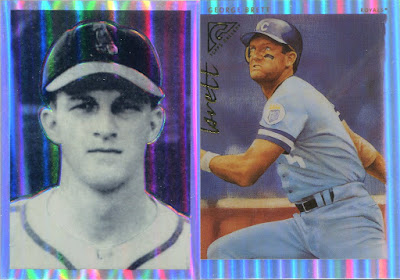 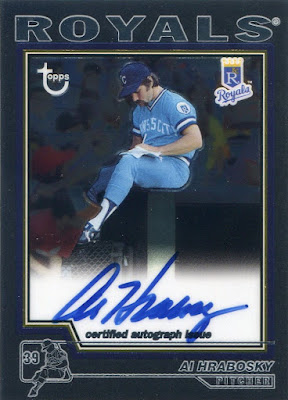 But the totem pole isn't everything.

Normally, something like this would rank quite low. Though they did occupy the very top of the totem pole at one point in my collecting life, autograph cards now sit somewhere near the bottom. I acquire maybe two or three a year and almost never go out of my way to add them to the collection.

BUT THIS. A Topps Retired autograph of Al Hrabosky! The Mad Hungarian himself! And, oh yeah, it's an autograph card of a guy signing autographs! A meta-autograph card! WOW! All those thoughts (and more) ran through my head when this first fell out of Shane's package, which is not my typical Oh-that's-nice... reaction to getting an autographed card.

However consciously or not, I'm sure most of us operate our collections within some sort of hierarchy. But for me, a lot of the fun comes from finding cards that upset the order of the totem pole and spin things into a kind of glorious chaos, much like this Mad Hungarian autograph did.

Because a collection is -- and should be -- an ever-changing thing.
Posted by Nick at 6:12 PM

when i returned to the hobby i was dead-set against collecting anything unlicensed. Before long, I began to appreciate Panini then the customs caught my eye: Helmar, Gavin, and Gio of WTHBalls fame. As Topps continues to lose its appeal to me, I am more drawn to these cards.

Love the Cash..hope my custom card project looks that cool!

I recently, for the first time in my 29 years in the hobby, changed my focus...it was a gradual thing, but started in 2015, and really took over in 2016. I still collect the same way I used to when possible (set building) but it's nearly impossible now as most real sets have been replaced by memorabilia delivery systems...I can't/won't spend $240 for 15 cards. My new focus is on getting one card of every person who ever got one in my three sports. It's a very rewarding project, and I may never be able to finish it, but I'm having a whole lot of fun trying. I've gotten one of my sports down to exactly 25 people missing...all time. And about half of them are people who got their first cards in 2017! Doing this project has allowed me to feel more like a historian rather than just a collector.

Glad you enjoyed everything Nick! That Cash custom is one of my most prized customs as well. I've got another package building that I'll get in the mail in time for the holiday break here...

That Cash is awesome! Love Gavin's work. Recently purchased one of his boxes and some of my favorite cards were the customs.