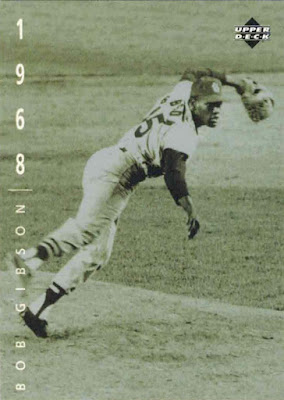 In an effort to keep the game even more alive in my mind during the offseason, I've recently started reading the first baseball book I've picked up in a while: Summer of '68 by Tim Wendel.

The book, as you might guess, is about the '68 season, and though it centers around baseball, it provides a wide-ranging look at the year as a whole, everything from Martin Luther King Jr.'s assassination to Joe Namath to the Democratic National Convention. These time-and-place books are the non-fiction I most enjoy, and it's been a solid read so far.

But of course, I'm most interested in the baseball aspect of it all. The book's heart is set around the Tigers-Cardinals World Series matchup, and specifically, Bob Gibson, whose mind-boggling 1.12 ERA in '68 is still the lowest in modern history.

For that, I've decided to take a look at my five favorite Gibson cards this afternoon. 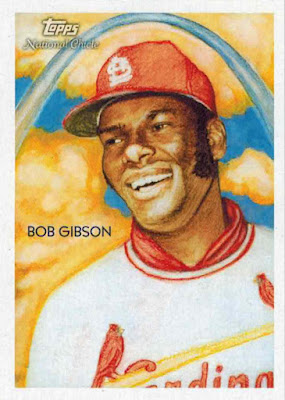 I rather enjoyed the one-and-done National Chicle brand, and though it provided some of both the ugliest and most elegant cards I've ever seen, this one definitely belongs in the latter. 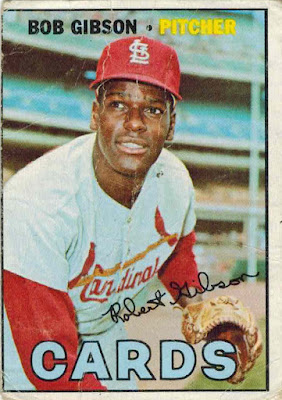 This is my oldest standard Topps Bob Gibson card, and I somehow found it for a whopping 75 cents at my otherwise lackluster LCS.

These days, that card shop doesn't seem to have anything priced under fifteen bucks, which made such a score all the more surprising. 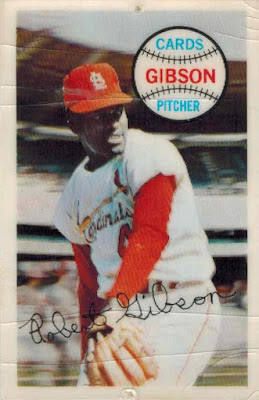 I don't own a ton of cards from Kellogg's inaugural-year set, but this might well the best one I've been lucky enough to add to my collection. 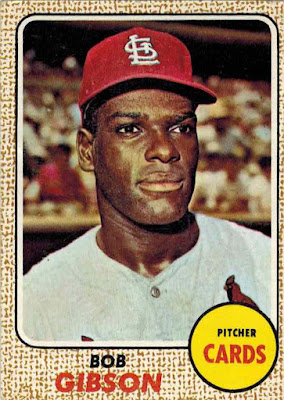 Here it is: Bob Gibson as he looked in the Year of the Pitcher.

Since I've started the aforementioned book, I've become disappointed that such a historic year for baseball was documented on arguably the worst vintage Topps design. For every one person who likes the burlaps, there's probably ten or twenty (like myself) who don't.

That said, I do enjoy this card quite a bit -- I get a bit spooked just looking at that glare here almost 50 years later, and I can't imagine how batters who actually had to face the guy must've felt. 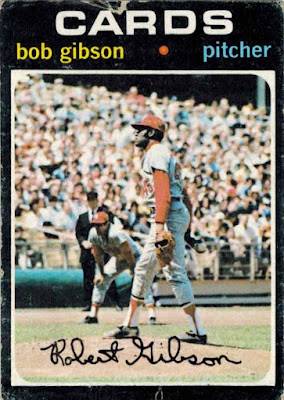 But although Gibson's '68 Topps card is probably his most famous, it's actually his '71 issue that remains my favorite.

I thank '71 Topps with every fiber of my being for reintroducing action shots to the hobby, and Gibson was granted one of the classic ones that year (and it'd actually wind up being the only action photo he'd receive on a standard Topps card).

Here, we see Gibson in the quaint moments before presumably uncorking a 150-MPH fastball at some poor hitter. And what's more, we get the elusive fielder-ump-crowd combo in the background.

Put it all together, and you get what is, and will probably always be, the best card of Bob Gibson.
Posted by Nick at 3:39 PM

I'm one of those weirdos who likes the '68's - I guess I just have a thing for burlap. Excellent countdown for an excellent pitcher!

That upper deck insert card is awesome! What year is it from?

Great cards! My oldest Gibson is a beat-up 1969, so it also reflects that 1968 season in the stats on back.

Love the 71T action shot. I don't think I own that card. Hopefully I can find a cheap copy on COMC. That Chicle is nice too. Some of the best looking cards from the past decade come from that set.

When topps did that card giveaway (where you entered the code, got a card, and other users could propose trades for the cards), I won a (pretty sure it was) 67 Gibson. I received tons of trade requests for it, but held on for the Gibson. Unfortunately, topps swapped it out for 2 other cards, which while both older, they were of no one of importance. It was an extremely disappointing experience.