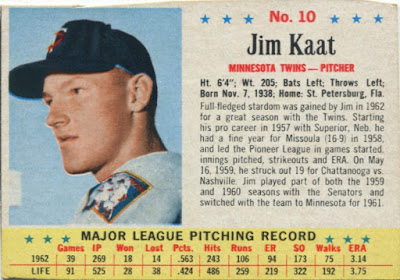 I've recently developed an addiction to COMC, and there's a few things I can blame for this since I don't really want to hold myself responsible.

1) Secret Santa. COMC seemed like a perfect place to do some shopping for the blogs' Secret Santa festivities this year, and given the site's insanely wide inventory, it provides a ton of different gift-giving routes.

2) Black Friday. COMC offers a great Black Friday sale, complete with free shipping and heavily reduced prices across the board.

3) Pretty much everything else. I see people blog about COMC all the time. I sometimes peruse their inventory when I get bored. They have almost any/every card you could ever dream of. And yet somehow I'd never actually ordered from them.

This year seemed about as good a time as any to end my COMC drought. 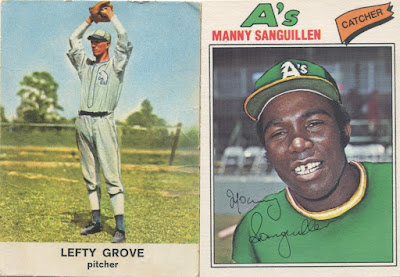 Fast-forward to about a week ago when my grand Black Friday COMC order finally arrived at my doorstep.

I was originally trying to take a page from Shane's playbook and make it a COMC blaster. But soon one blaster turned into two. Then two blasters became a hobby box. And soon, there was no doubting it: this had turned into a COMC Card Show.

It's almost blasphemy to say, but things like Post Jim Kaats and vintage Lefty Grove oddballs and Manny Sanguillen OPCs were almost like background music when you consider the sheer power of the rest of my inaugural COMC experience. 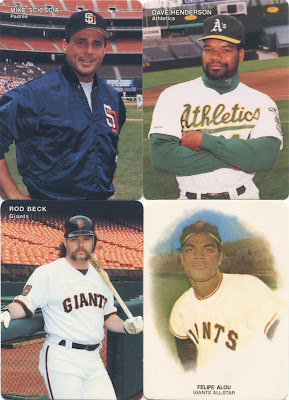 The great thing about COMC is that they have pretty much every single type of card that has ever existed ever -- seriously, you can get lost for days going through their inventory.

This includes Mother's Cookies, which rarely show up here in the Midwest but are readily available on COMC for pennies on the dollar (any my god is that Rod Beck glorious!). 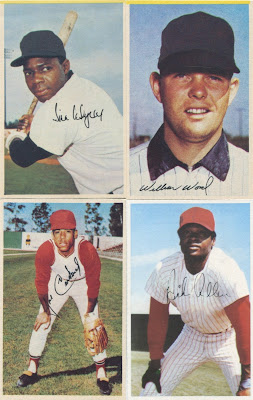 These '60s photo stamps aren't the most exciting cards, but for under a buck each, I ain't passing up a chance to add new oddballs to some of my favorite player collections. 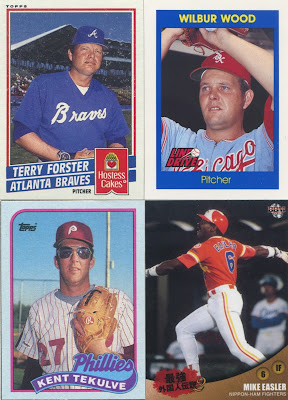 I guess one of the reasons I'd become a stranger to COMC over the years was that I had the (wrong) impression that their prices were a bit high.

You can certainly find overpriced stuff on there (which, to be fair, is true with any online card site) but, as I found with this order, there's room to discount dig to your heart's content. And it's just plain fun going through their inventory.

None of these set me back more than 50 cents or so, and the Easler is probably my favorite of the bunch since I never even knew he played in Japan after his MLB career. 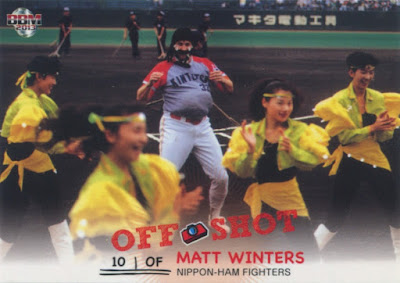 I have no idea who Matt Winters is or what the heck is going on here, but I knew from the minute I saw it that I was born to own this card. 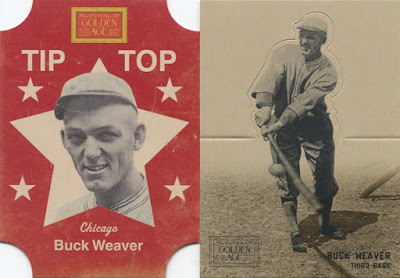 I say it daily: I miss Golden Age. 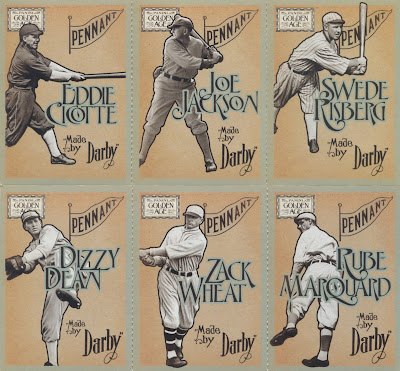 GOD do I miss Golden Age.

These box bottoms just about made my jaw drop, as I'd never known they existed before COMC came along. Better yet, they separate into individual cards (note the perforations), which is cool because, while I love panels, I'd much rather have these displayed in a nine-pocket page.

And as if that Black Sox panel on top isn't beautiful enough, on the far left is the first shot I've ever seen of (pitcher) Eddie Cicotte batting (!!!). 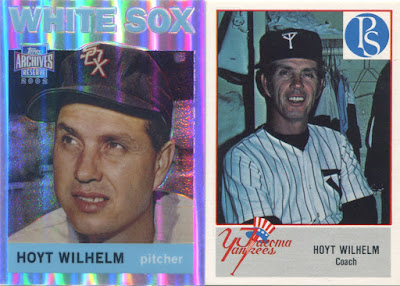 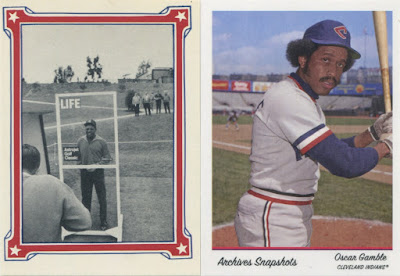 A couple pieces of miscellany here, including a look at how magazine covers were made in the days of Willie Mays and my first look at the recent Archives Snapshots release with a man who celebrated a birthday yesterday, Oscar Gamble. 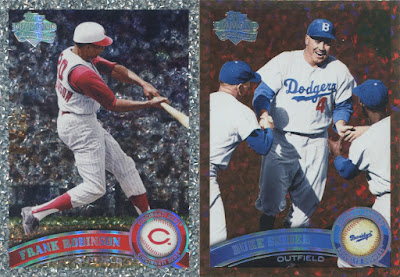 Look, if you're going to mark these sparkly legends down to 60 cents a piece, there's just no way I'm not gonna buy them. 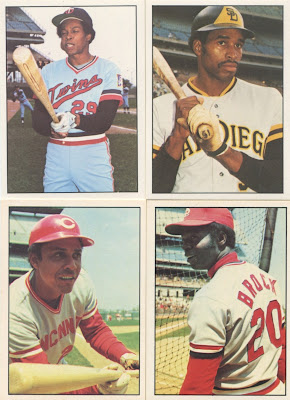 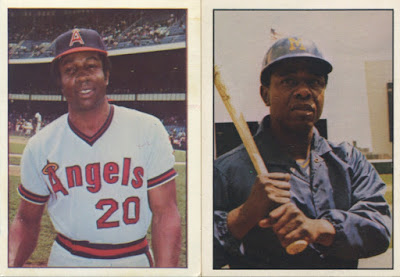 More SSPC, though these aren't quite what they seem.

The Frank Robinson is my first card from the lesser-known 1975 SSPC Superstars checklist -- but more importantly, it's one of the extreme few images I've ever seen of Frank with the Angels. The Aaron is indeed from '76 SSPC, but it's actually an advertisement for the product (that features a different image than Hank's standard SSPC issue). 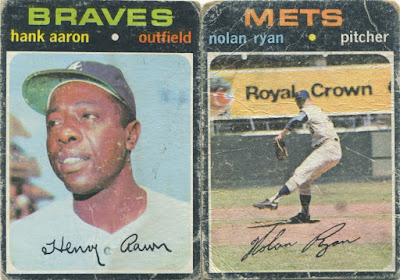 Another great thing about SSPC is that once you buy store credit, you can make offers on cards, and from my experience, the majority of those offers get taken.

I managed to snag that '71 Aaron for the sub-$4 offer I made on it, which is a real score because you never see his cards that cheap. The Ryan was an even bigger surprise: my offer of around $5 was taken right away.

Just like that, it finally happened -- I finally had a real, actual Mets card of Nolan Ryan in all its weathered, well-loved glory. 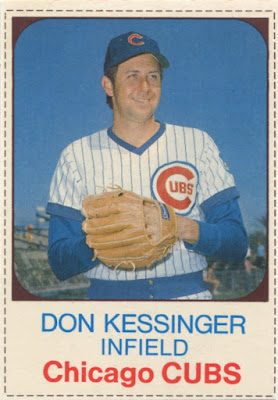 As you've probably been able to tell by now, my first foray into COMC was overwhelmingly oddball-heavy, and we haven't even gotten to the greatest oddballs of them all yet. 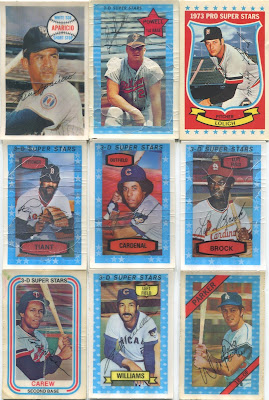 ...and then there's the almighty Kellogg's.

While the Kessinger was the only Hostess card I ended up purchasing, things got a bit out of hand with the Kellogg's. That's mostly because these things were priced to move on COMC -- none of these cost more than a dollar despite the big names you see here. 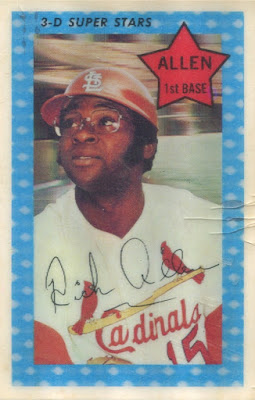 But this was perhaps the single great coup of my COMC card show, one that's sat near the top of my want list for many years now.

This is the only card I've ever seen of Dick Allen in a full Cardinals uniform -- his '70 Topps issue is an unflattering profile shot in an obviously obscured Phillies cap, and he was already a Dodger in '71 Topps. It's not often that a guy's only appearance in a given uniform comes from an oddball set, but that's exactly what we have here with Allen, one of my all-time favorite players, to boot.

I'd never seen this card cheaper than about ten bucks or so on my many wild goose chases around the 'net. So you can imagine my surprise when my offer of a whopping $3 was accepted on COMC, a cherry on the top of what was a fantastic virtual card show.

You probably won't be surprised to learn that I've already placed a second COMC order because, like I said at the beginning of this post: I am addicted, and there's no going back now.
Posted by Nick at 6:10 PM

I like COMC. You really can find some deals. If you lad some money into your account it allows you to make offers. Some sellers are pretty eager to sell.

I discovered COMC myself in the past few months, and have had to set a budget for myself so I don't go overboard. I am constantly finding new cards and sets that I want to have represented in my collection.

I've bought a lot of cards for you off COMC..i love it!

Awesome grouping Nick!!! I love the Winters card and the Wilhelm minor league release in particular. Now that you're hooked there's no going back :)

You know you did well when I'm looking at cards you bought and prices you paid and I say "Man, if I knew that was out there...." I really need to be better about making offers. I tend not to think along those lines, which is kind of silly since I'm always open to offers for the cards I sell on COMC. Something to keep in mind, assuming that other sellers are like I am: I'm always more receptive to offers made on multiple cards, even if it basically amounts to "If I buy this card, will you give me these other cards?"

My COMC story- After my wife and I bought a house last year, I found COMC in December 2016 when buying autos from my favorite team on eBay for my new man cave. I started selling cards in March 2017 while also "cashing out" any profits by buying those autos while still dumping $100+ cash a month into my team on COMC. (Sorry don't want to say my team so they don't get gouged). The past year has been absolutely exhilarating! If anyone has any questions on buying/selling please feel free to contact me at lbarch@outlook.com. For transparency, my COMC name is also lbarch. For anyone who is worried about paying more than value my strategy is to keep my cards priced below everyone else without paying COMC a sale fee, but when I cycle through my inventory someone is constantly undercutting me. I lower my price,even at a loss (not going to sell if it is not the lowest price) only to later find myself being undercut again lol. I am not complaining at all because I do make a small profit, just trying to alleviate any fears out there about being overpriced. I truly spend more on the site than I sell. For me, and I suspect most, selling is a fun hobby. As an 80's kid, it has been very rewarding feeling the passion again. Happy hunting! :)