More Big Fun Games, and why I only collect cards 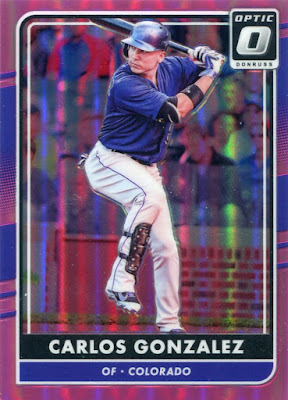 I had the privilege of participating in a couple other Big Fun Games after Gavin's custom-filled blowout.

The first of these was held by John of "Johnny's Trading Spot" fame, and he had a number of terrific goodies at the ready. While the majority of John's items were baseball-related, I (of course) originally picked a number that contained a football prize -- a bronze card of Drew Bledsoe, I think.

While this would no doubt be a fun score for some, I am not a football guy: thus, I spent the next few rounds of the Big Fun Game actually hoping someone would steal my prize. And someone did. I then upped the ante by making a steal of my own for a neat '60s oddball of Dazzy Vance...which was, in turn, stolen from me not long after.

I was disappointed, but not angry -- such ruthlessness is part of the fun of Big Fun Games, after all. 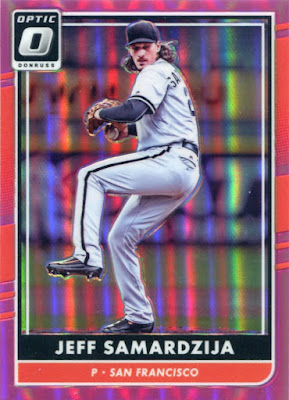 After losing the Vance, I made another steal -- my evil side tends to come out a bit in these Big Fun Games -- this time for a small lot of pink refractors from last year's Donruss Optic.

Once the dust had settled, this was the prize I ended up taking home, and I was darn glad about it. While Optic is a fairly boring set all on its own (basically a poor man's Topps Chrome), the presence of pink borders spices it up quite a bit.

Because, and I cannot stress this enough: 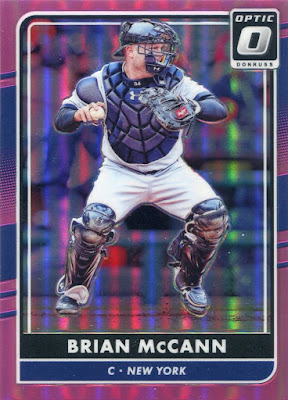 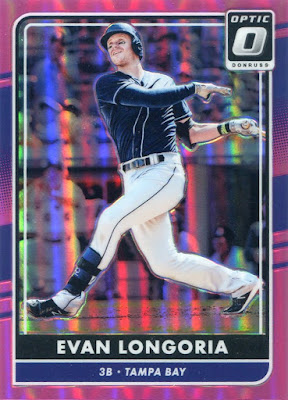 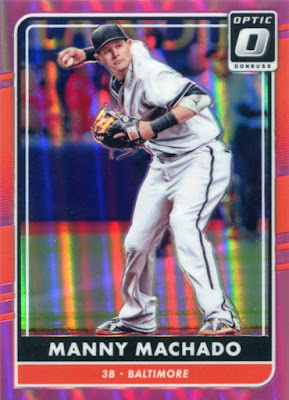 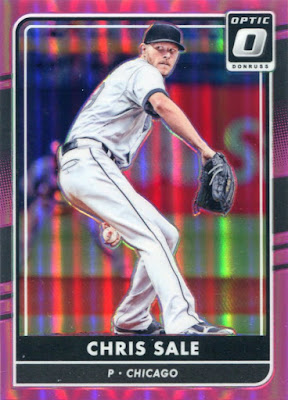 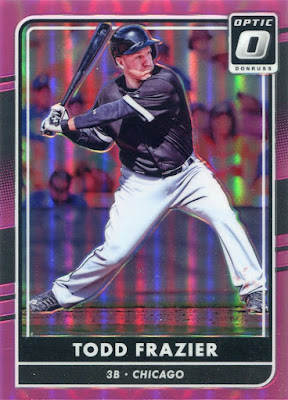 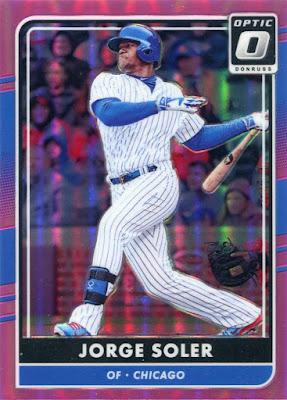 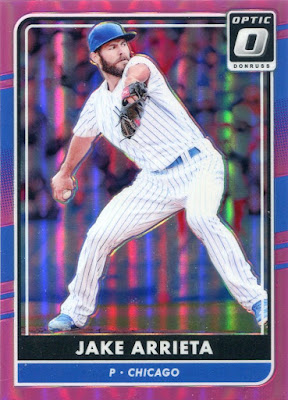 I'd have to sit down and actually make the list one day, but pink refractors may well be my favorite type of refractors, and I make no apologies about that. I don't often equate baseball and the color pink together, but they make for darn fine baseball cards. 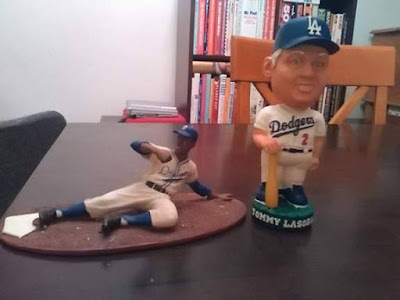 The last Big Fun Game I joined was run by Oscar of the "All Trade Bait, All The Time" blog.

This time, I ended up with the original prize I'd selected -- no stealing necessary -- and it didn't involve cards at all. I won a pair of figurines: a small statue of a sliding Jackie Robinson, and a bobblehead of the very bobblehead-worthy Tommy Lasorda.

Now don't get me wrong, I'm ecstatic to have won a couple awesome Dodger-centric prizes that I likely would've never seen otherwise living in Chicago and all. 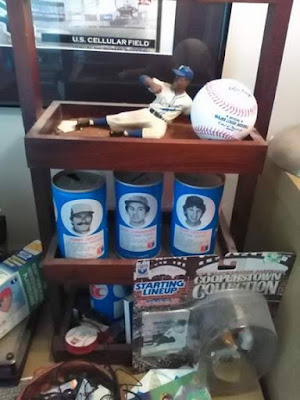 But though the temptation has always been there, I've never thought of myself as much of a figurine collector -- or a collector of pretty much anything else baseball-related besides cards.

There's one simple reason for this: they take up a lot of space, and with all the cards around I don't have much remaining space to play with. I honestly don't know how anyone who doesn't live in a mansion and/or have a card room to themselves collects anything besides cards.

I did, however, find a good spot for Jackie, on a stand right above my Hoyt Wilhelm SLU figure and '70s RC cans, and next to the BP ball I caught at Wrigley last month. 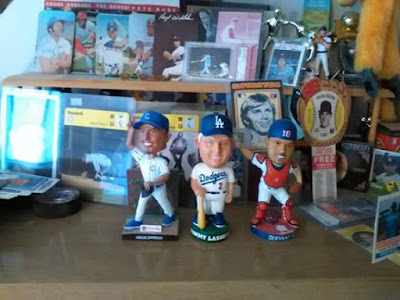 Tommy went on my other baseball-themed display on my dresser, complete with a cornucopia of all the oversized oddballs and yes, more bobbleheads I own.

While I own several thousand baseball cards, they're all in fairly good order. I can go grab you pretty much anything from any of my binders right now in the span of a few seconds. What you see on my dresser, however, is in absolutely no order at all and has a bit of a haphazard feel to it even though I try to fix up the display on a semi-regular basis.

I'm always happy to receive any figurines people want to give me but, aside from having very little room available, I guess I'm just plain afraid to start collecting them. Perhaps I'm just paranoid, but I feel like they're the last thing preventing me from crossing into hoarder territory.

Oh man,a Lasorda bobblehead!!.. If you're only gonna have a few,that's a GREAT one!!

I agree that figures do take up a lot of space but gosh darn it, they're fun to collect! While I don't have any room for them at home, I took all the bobbleheads and Starting Lineup figures I have and made a nice little display of them on my desk at work. They're good conversation starters if nothing else.

Glad you were able to take home a prize you liked.

Nick, I don't know what you're talking about, I see plenty of room for more stuff! :)