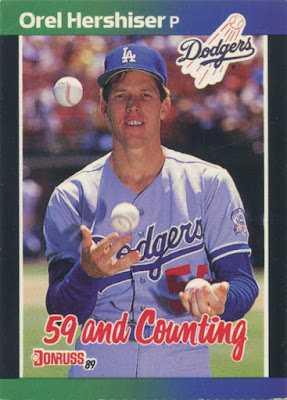 (In the interest of time and space, I've decided to postpone my fairly scan-heavy weekly frankenset posts and revive my past "Top Five" theme, in which I showcase my five favorite cards of a selected player from my stable of player collections. Enjoy!)

I often wonder how aware baseball players are of their own cards.

Do they have any of their own cards? Do some of them know that there are people out there obsessively chasing (and perhaps dropping big money on) their likenesses? And, perhaps most importantly, how much do they care about their baseball card personas?

Thanks to a random article I stumbled upon a few days ago, I at least know Orel Hershiser's answer to that last question is in the affirmative. The Bulldog is quoted as saying: I always tried to help the guys doing the photos not get bored.

There's no doubt that Hershiser's self-awareness in this regard made his cards just plain better, as I had a tough time narrowing it down to a surefire Top Five. 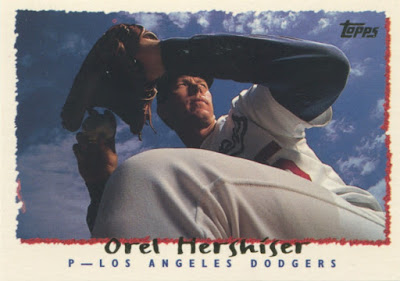 Though Hershiser has a lot of well-known cards, you don't usually hear this one mentioned.

I guess it kind of fits in with my feelings about '95 Topps as a whole: beautifully underrated. 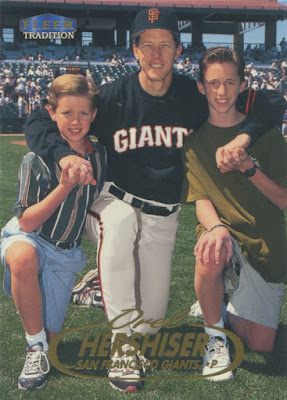 I always enjoying seeing family ties on baseball cards and, despite the fact that Hershiser looks infinitely awkward in a Giants jersey, this photo of Orel with sons Jordan and Orel V (the Hershiser you know is actually Orel Hershiser IV) is worthy of a place on the mantel.

His two sons look a lot like him, so much so that I'm a little freaked out by it. 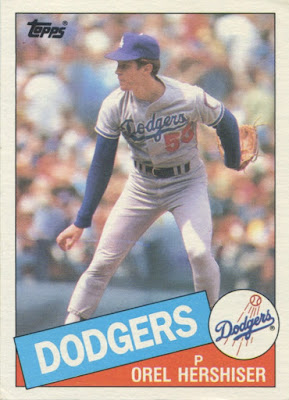 No blue skies or polo-shirted children here, just a classic rookie card of the Bulldog.

I actually own all of Hershiser's major-brand rookies, but this early image of his classic follow-through has always been my favorite by a wide margin. 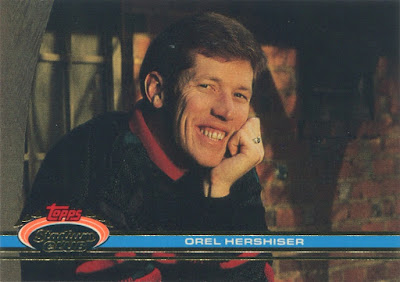 And then there's this one.

Take away the nameplate and Stadium Club logo and you'd have absolutely no idea this is a baseball card -- it'd just be a goofy suburban dad in a thrift-store sweater. To this day, it still confuses me. I'll look at this card one minute and gush at the oddity of it. Then I'll see it next to action shots and Dodger Stadium poses in my LA binder and instantly wonder what the heck it's doing in the same group as all those real baseball cards.

It occupies the #2 slot in this countdown more because I've ever seen anything else quite like it in the hobby, and somehow, it so perfectly sums up Orel Hershiser's left-of-center baseball card persona. 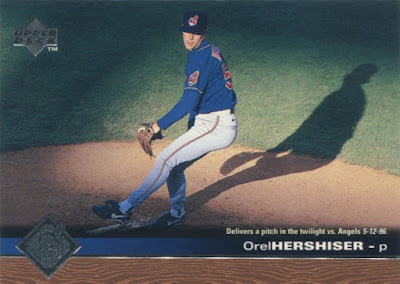 But Hershiser's status as a cardboard god goes further than sheer quirkiness -- it often extends in to pure, unfiltered art.

In an odd turn of events, my favorite card of the Bulldog actually came during his relatively short time in Cleveland. And though I'm sure 99 percent of baseball fans remember him as a Dodger, he's at least partially immortalized in my mind as an Indian because of the sheer magnificence of this card alone, which -- as the back of it perfectly notes -- makes it look as though Hershiser is pitching under his own spotlight.

Just perfection, and in the end, all I can say is: thanks for caring about your cardboard, Orel.

I got to see the Bulldog hanging outside of Tiger Stadium when he was on Cleveland in the mid-1990's after a game. I thought it was so cool to be that close to such an awesome pitcher.

I remember the magical season of 1989, I believe, for Hershiser, however, my favorite years of his career are when he was with my Indians. He was brought in as a veteran presence on our mid 90s teams. Would you be interested in more cards of his? What other players do you collect? You can email me at the following...tim(underscore)gretchen(underscore)marriage AT yahoo.com

Thanks, Tim...long time reader of your blog.

A. I remember his scoreless streak. It still boggles the mind.
B. Seeing him as a Giant is weird.
C. The 1995 Topps would be my favorite out of the bunch.

Very interesting article. Always wondered about that Hershiser card with the clump of grass. Thanks for sharing it.

Can't argue with these 5 but some others to consider picking up if you don't have them, sorry not sure of years:

Hello, just a collector here. I have two of the 1997 Upper Deck #53, is anyone is interested, I am looking to sell them.

Nice blog - just found it. Wanted to comment on your #2 choice for Hershiser. Big Dodgers fan and I think I can shed some light on this card. I don't think I have ever seen this card. Hershiser wore this sweater at the team's World Series parade in 1988. The old footage of him addressing the crowd and holding up the WS trophy in this sweater at city hall in front of a sea of blue is so odd. You can see that he is also flashing his World Series ring. So my question is who the heck let him wear this sweater that day? If he was married, how did she let him out the door with that sweater? How did a team official not give him another blue shirt instead as the parade started? I need to buy this card.