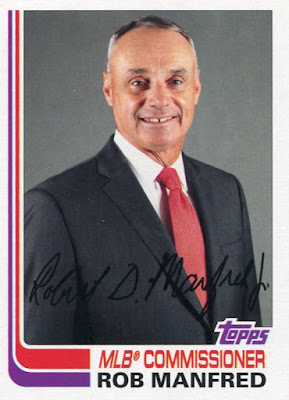 Rob Manfred has a card in this year's Archives, and I'm still not quite sure how I feel about that.

I didn't pull it myself -- it arrived from reader Jonathan T. who recently reached out to me about a trade -- but I have to imagine seeing this older, suit-and-tied Harvard graduate fall out of a pack of baseball cards would be rather jarring.

I suppose it's an interesting experiment, if nothing else. Aside from Kenesaw Mountain Landis, I own next to nothing of baseball commissioners -- and the appearance of MLBPA director Tony Clark in this year's Archives is also a first. And I'd honestly rather have a commissioner in my collection than my 109th different Henry Owens (seriously, the guy's stalking me).

But the question remains: do we really need a baseball card of Rob Manfred? If you want to feature an outside-the-lines member of the baseball fraternity, why not include a couple announcers? Or some superfans?

At the very least, it seems like Manfred would be better suited as a subject in A&G or something along those lines. 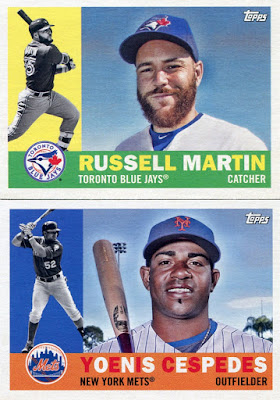 For now, however, let's take a look at a couple other things Jonathan sent over: starting with a couple of your standard non-commissioners from 2017 Archives. 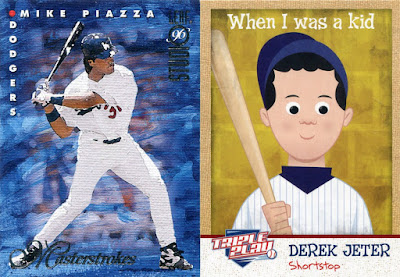 Jonathan and I executed a trade in which we sent each other a handful of cherry-picked items from our respective want lists, and another handful of completely random stuff -- the two you see here came from the latter category.

The Piazza is much appreciated, as I've recently started to ramp up my chase for his cards, and I may be the only person left who still has any sort of affection for the Triple Play brand. 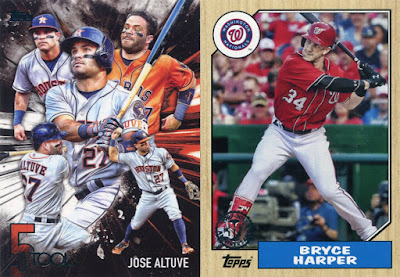 A couple from the want lists, including an Altuve from this year's Five-Tool insert set which I've begun warming up to as of late. 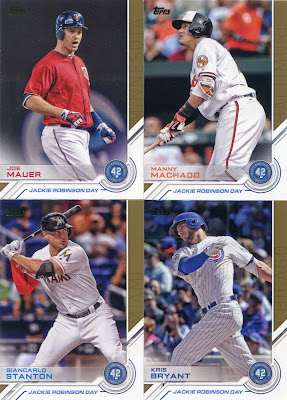 I was excited when I heard that Topps would be issuing a special series of Jackie Robinson Day inserts, as players in 42 jerseys is a prominent mini-collection of mine.

I'm currently in the midst of trying to build the entire set, but I've noticed a problem with some of the photos: many of them don't actually feature images where the 42 is visible, which kinda defeats the purpose of the whole thing, doesn't it? 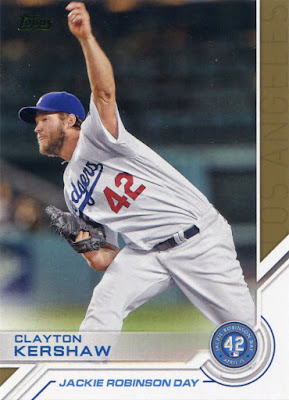 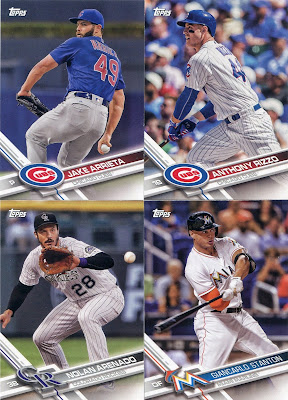 Jonathan sent over another small package shortly after his first arrived, and these NL Team Set cards were among the highlights.

Not sure if I'm alone, in that I'm always tempted to pick up one of those sets every time I walk into a Target, so thanks to Jonathan for suppressing that urge...for now. 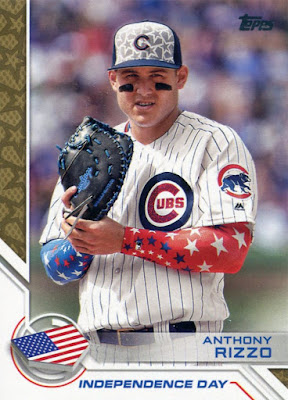 As far as a card capturing the true spirit of an insert set, look no further than this Independence Day-themed look from Mr. Rizzo.

Red sleeves, blue sleeves, white jersey, stars all over the place: AMERICA. Rizzo is one of the few guys these days who seems to consistently get good cards -- no, I'm not just saying that because he's one of my favorite players -- and this one just adds to his legend.

Certainly more exciting than a suit and tie.
Posted by Nick at 6:24 PM

All I can say about that Rizzo is wow! Talk about being an "all-star!"

Baseball has a serious lack of announcer cards. There is so much great talent out there it's a shame they will never get a card.

I think it's great that they issued commissioner cards. Sports don't happen solely on the field, there are other people involved, sometimes integrally, that never get cards. I don't have much baseball but I do have a card of Bart Giamatti in my collection.

I don't mind commissioner cards. I own a 59T Ford Frick... and the 90T and 90D Bart Giamatti tribute cards. Added the Manfred when I bought the complete set a while back. Not sure Topps needs to include a card in ever set... but one card every now and then doesn't hurt.

nice! The Piazza is a true beauty. Fortunately I own this one!