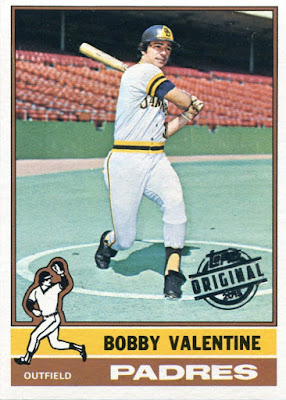 On Sunday, just three days into 2016, I hit a small hotel card show at a Holiday Inn about 20 minutes from my house.

This is the new record for shortest wait for a card show in a calendar year, as you might guess. Even better was the fact that I spent exactly zero dollars of my own money on Sunday. Every cent was supplied by cash I received from relatives for Christmas.

Because of that, I allowed myself to be even more liberal with my spending than I usually am. Had it been my own money, I'm not sure I would've dropped a whole 33 cents (from a 3/$1 box) for this buyback Bobby Valentine, one of my favorite cards from the '76 Topps checklist. But I didn't have to give it a second thought on Sunday.

It's always a whole lot easier to spend someone else's money, isn't it? 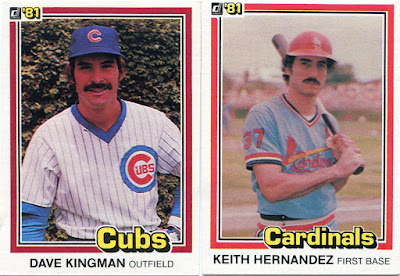 I wasn't around at the time, but I've heard that hotel shows like this one were quite the rage during the hobby's boom in the late '80s/early '90s.

I was thinking a lot about card shows in the days leading up to Sunday. I'm lucky enough to have both smaller gatherings like this one and big convention-hall type deals (like the one I attended this past November) fairly close to where I live. Each have their pros and cons.

One of the downsides to hotel shows is the fact that they're much, much smaller in size, and thus not as susceptible to producing the WOW pieces of cardboard that bigger shows can. There was almost no vintage to be found on Sunday, and I didn't really buy anything earth-shattering.

Depending on how you look at it, either the 1976/2015 Valentine buyback or the small stack of '81 Donruss singles I found at the first dime box of the afternoon were my oldest finds of the day. 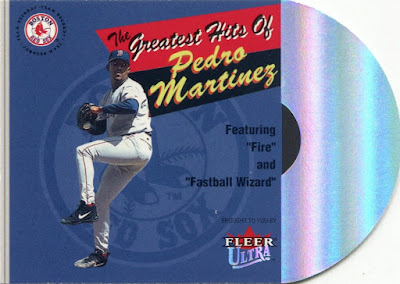 All things considered, however, I think I like these smaller hotel card shows a bit more for the sheer fact that they're a much better match for my collecting personality.

The bigger convention-hall shows are awesome, of course, and have shown me (along with Twitter) that there are indeed extroverted card collectors out there. I am about as introverted as introverts get, and, though I don't know many of you first-hand, I would assume that most bloggers are similar.

Hotel shows are the introverts of the card world. The rooms are a lot less crowded and generally pretty quiet. All the vendors at the show I attended on Sunday seemed to know one another and weren't just there to make a quick buck. I can breathe at hotel shows. There were about twelve tables at this one, and I think I bought something from nine or ten of them.

This fantastic cardboard-vinyl "Greatest Hits" Pedro mashup came from one of about a half-dozen dime boxes I dug through on Sunday. 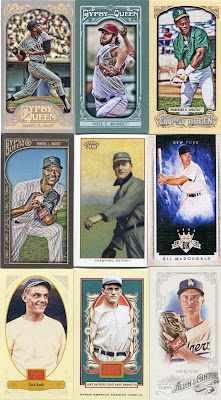 This hotel show was the one of the same gatherings I attended during my two-shows-in-one-day extravaganza back in April.

I found that almost all of the same vendors were in attendance on Sunday. I'm starting to recognize more and more of the faces of my local cardboard community thanks to these smaller shows. The guy with the dime box of minis at the big show I went to in November was at this one.

At that price, I couldn't help but grab a handful of the ones I missed the first time around. 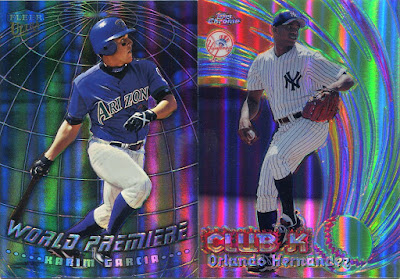 Even the few new faces in the room had something for me.

One lady had a 7/$1 box at her table (can't say I've ever seen that price point before) that resulted in a couple uber-shiny and awesomely over-the-top late '90s gems.

The El Duque is what I imagine every baseball card would look like on LSD. 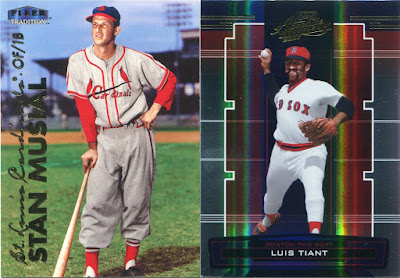 The shiny Tiant was another of Sunday's prime dime box suspects.

I usually balk at paying more than a quarter for anything that isn't vintage, but I was a little lax on that rule this time around (again, it wasn't my money). I probably bought more quarter-plus modern cards at this show than ever before. That includes the beautiful '99 Fleer Tradition Stan the Man, which was a fifty-center.

Because you can't get all of the best cards for dimes. 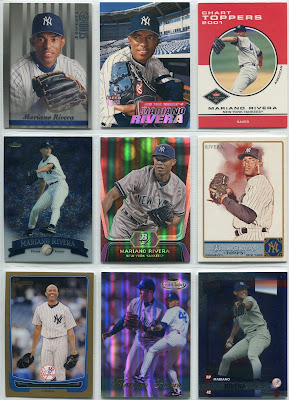 I've made a concerted effort to pick up more Mo cards ever since his retirement, and the dime boxes have produced them by the bucketload.

These are nine of a couple dozen Riveras I bought on Sunday, and a great example of how easy it can be to build a collection via dimes. 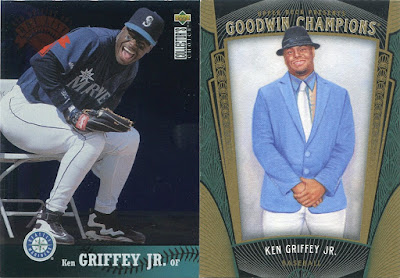 I've picked up the pace of my Griffey chase in the last couple years as well.

It'll never be a fraction of a fraction as good as the best Griffey collection out there, but I'm starting to find that, when you take them all together, Junior has some of the best baseball cards ever made.

These two dime finds feature the man doubled over in laughter and looking rather dapper in a sky blue suit. 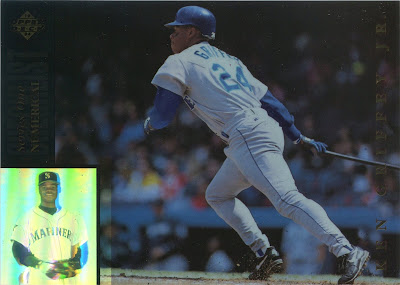 What's more, Griffey was responsible for my biggest find of the day, at least as far as size is concerned.

At fifty cents, I picked it up in a heartbeat from the aforementioned lady with the 7/$1 boxes.

Talk about getting value for your loose change. 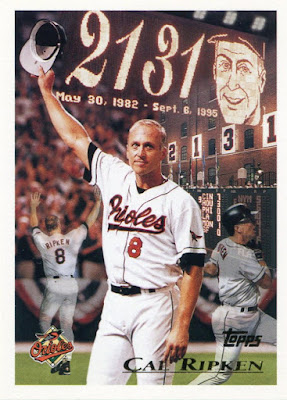 Whether I'm in a hotel room or a convention hall, my mini-collections are always bound to take a beating at card shows.

This Ripken is another notch in the seemingly endless array of tips of the cap from the Iron Man. 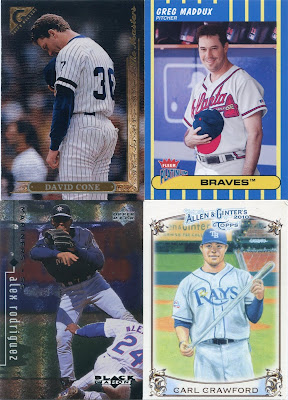 These mini-collection hits were all dime finds aside from the Cone, which was one of those 7/$1 box gets.

If Google's math is right, that's about a fourteen-cent box...doesn't have the same ring as "dime box," does it? 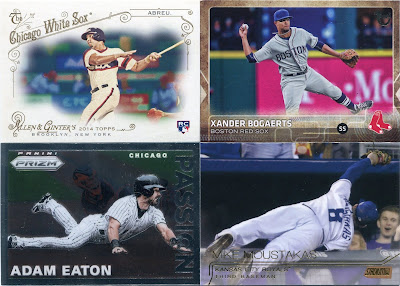 Here's a quartet of more recent mini-collection hits of the horizontal variety.

All different prices here: the Moose was a dime (it's actually one of the impossible-to-decipher gold parallels from 2015 Stadium Club), the Eaton and Bogaerts were a quarter each, and the Abreu rookie was a whole buck.

That Prizm card actually isn't half bad...which, given my distaste for the brand, is a high compliment. 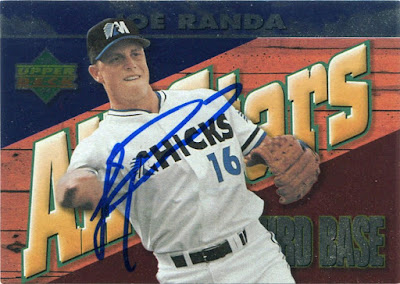 Hotel shows might not have those WOW cards, but they might just turn up something you've never seen before.

This Joe Randa IP autograph fell out of the first dime box I hit on Sunday. Autographs in dime bins are extremely rare, and ones of twelve-year big league veterans are even scarcer. For a dime, I was happy to give this abandoned signature a home.

I have to believe it's real, because why would anyone forge a Joe Randa autograph? 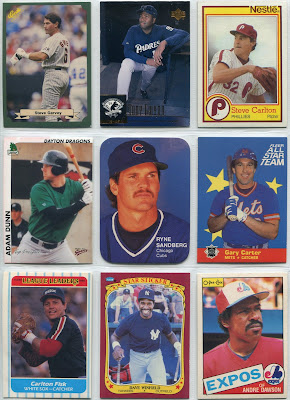 The oddballs came out in bulk on Sunday.

The minor league Adam Dunn, Nestle Steve Carlton, and all the others here are fine and good, but my favorite has to be the Sandberg at the center. 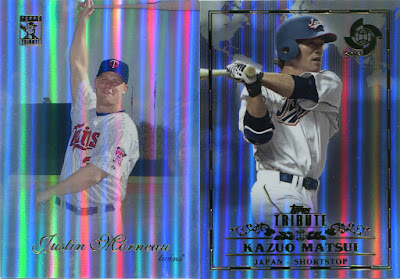 Such high-end cards at a dime per is sure to make me swoon.

I particularly like the Kaz Matsui here because I had no idea he was still playing in Japan (as of 2013, at least) following his departure from the US of A. 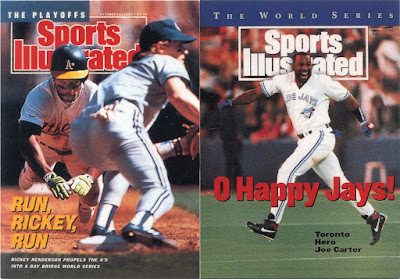 Whoever came up with the idea of putting magazine covers on baseball cards deserves a Lifetime Achievement Award. 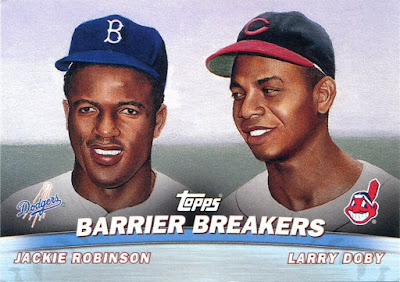 Just last week, I said that Larry Doby's 2015 Stadium Club issue was the only time I'd seen him and Jackie Robinson together on the same card. 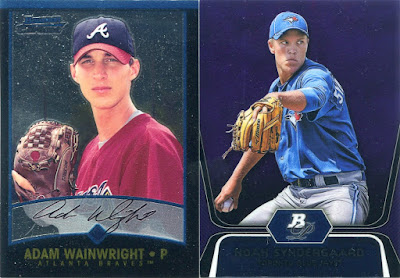 Neither Adam Wainwright (Braves) nor Noah Syndergaard (Blue Jays) ever played a single big-league game with the teams that drafted them, which makes cards of them in those uniforms highly coveted in Dime Boxedonia.

That's my third card of Waino as a Brave, and it cost me a mere dime. My first of Thor as a Jay set me back a full dollar.

And, while we're on the topic of the early years of great pitchers... 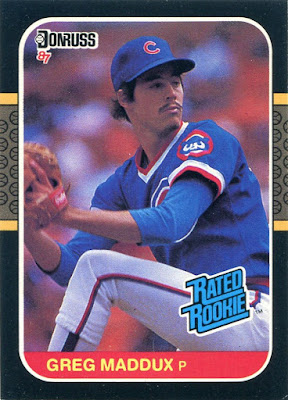 ...I finally tracked down a card I should've owned a long time ago.

I always thought a Greg Maddux rookie would fall out of a random dime box one day. Stranger things have happened, after all. But it never did. As a Cubs guy, I was a little ashamed to say that I didn't have one of the premier Cubs cards of the '80s, and, furthermore, one of the most sought-after rookies of the overproduction era. (Not to mention the basic fact that it's a rookie card of one of my personal favorite pitchers of the '90s.)

I saw the pencil-mustached Maddux at a table near the end of the show with a five-dollar price tag, and asked the guy if he'd take three on it. I knew it was probably a little more than I could've found it for online with a little searching, but, doggone it, I needed to put an end to not having this card already, ASAP.

So, after going my entire collecting lifetime without owning a Greg Maddux rookie, I now have one. And I have a small hotel card show to thank for it.

If you're a quiet, low-key collector like myself, then take my word for it: hotel shows are the perfect place to spend an afternoon.
Posted by Nick at 6:25 PM

That Musial photo is amazing. The Griffey laughing card is my favorite though, I slowly am putting together a nice PC of him as well. It's a marathon not a sprint!

Nice cards all around, can't believe you got that Bogaerts retro for a quarter!

I got the Bogaerts retro for slightly less than a quarter, it came out of a pack I bought.

Those are some great finds Nick. I agree with you, I think I prefer smaller shows. It's a more casual, laid back atmosphere than the bigger ones.

Lot of great stuff. Who doesn't like Junior. Or Stan the Man. Cheap shiny is always good, too. You have so many cards and so much variety. Do you ever buy duplicates by mistake?

That Ripken card might be my favorite of the entire 1990s.

Paying more than a quarter for vintage players on modern cards should get a pass.

I like all shows even the little ones because you never know what good stuff you'll find.

Hotel shows were easy to find in the early 90's. Whenever I would go on vacation with my parents you just had to grab a local newspaper and sure enough a show we be occurring on the weekend. I think the last time I was at one was around 2005 in a very small town in West Virginia. It was actually a pretty good show, but the turnout was bad so it only occurred once.

Nice pick ups. Love the 7 for a $1 cards. I remember the Mall shows than the Hotel ones.

Damn... Griffey is looking like a pimp on his Goodwin Champions card.

I am extremely jealous of all of you who get to attend card shows.

Here in Australia, we get maybe 3 or 4 in the entire Country per year.

One of which is about 80 miles from where I live, but I always seem to end up working on that day each year.

The other 3 shows are all in Melbourne, some 700 miles from here.

What I would give just to go through a dime box at a show is huge!

We have Target here, but they have never sold cards.

If I'd only known you needed a Maddux RC...I have a large stash! Perhaps I'll add another RC version in the next package to you. All money well spent, and not a dime of your own. congrats!