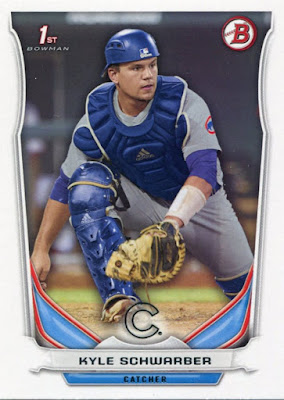 It can be tough listening to my gut at card shows, because my gut tells me to buy everything.

I don't think of myself as an impulsive guy when it comes to money. Apart from necessities like food, water, etc., I spend almost nothing on anything besides baseball cards. I guess card shows are my brain's strange way of compensating for that.

I've gotten better at controlling myself when it comes to card shows (part of that is due to the fact that my budget isn't nearly large enough to allow me to buy everything I want), but, since the money I was spending at this past Sunday's show wasn't mine in the first place, I decided to let my gut take the wheel at various times during the afternoon.

Example: This Kyle Schwarber, now the first big-league card of his I own. It set me back four dollars, my most expensive purchase of the day.

I probably overpaid a bit for it, but a) I'll have to get used to that living in Chicago and all, and b) my gut told me to. 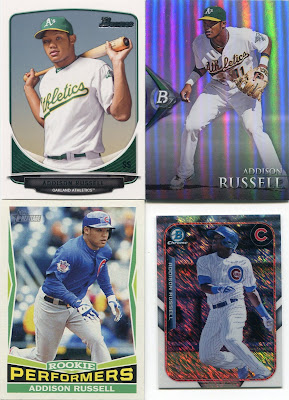 These were all fifty-centers, and I think my gut made some darn fine choices here.

Addison Russell may be the one young Cubs star that I can actually afford to collect, because Lord knows I'm already priced out of the Kris Bryant market. One of the fringe benefits of collecting Russell is that he has some zero-year cards as an A to chase, seeing as he never played a game in Oakland prior to his trade to the North Side. 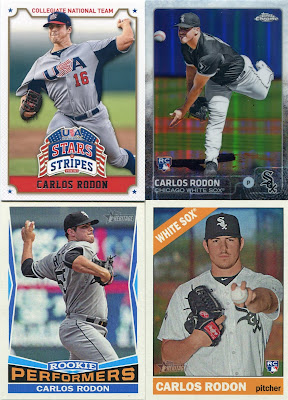 I think my gut is drawn to the new crop of young Cubs, but I need to remind myself that the Sox have some impressive youngsters in the works right now as well.

I quadrupled my Carlos Rodon collection in one fell swoop on Sunday. The USA card was a surprising dime box find, the Rookie Performers was another fifty-center, and the Chrome refractor and Heritage short-print were a buck per.

Once again, I think my gut did good. 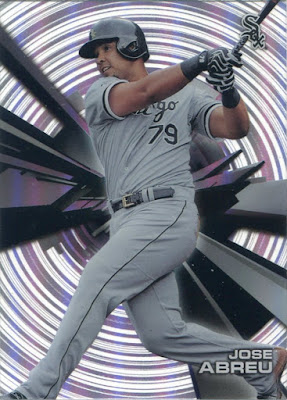 I wouldn't look at this card too closely, because it's bound to hypnotize you.

Like everything I've shown in this post so far, I stayed local in getting my first taste of the newly revitalized Topps Tek with this one of hometown star Jose Abreu.

I was never a huge fan of the original Tek, and I wouldn't pay the price that boxes now are going for, but I'm happy to welcome crazy cards like this one into my binders for fifty cents. 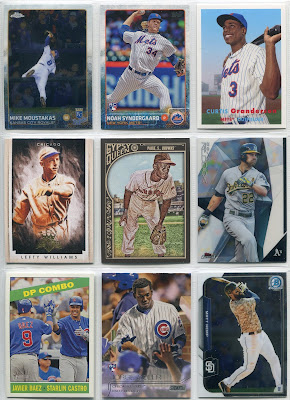 Like most shows I attend these days, I was able to knock out a hearty portion of my remaining 2015 needs on the cheap.

I think everything in this page cost about a buck-fifty all together. That's not even mentioning the other 100-plus 2015 singles I bought, the vast majority of them at a dime a pop.

Makes me wonder why I ever buy retail anymore. 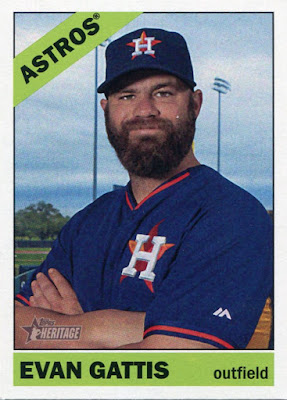 The vendor quoted me a dollar on this one when I asked for a price on Mr. Gattis, reminding me that it was a short print.

I said that was fine, and -- because my gut felt compelled to clarify -- I mentioned that I collect Evan Gattis. Unless you're specifically searching for cards of a certain player (which I'm usually not), it isn't a great idea to tell a vendor you collect somebody. They're sure to try and sell you something of said player, as this one did with the handful of Gattis auto/relics/clumps of hair he had.

I understand where vendors are coming from here, but I just find it incredibly awkward when someone tries to sell me a card that I know I'm not going to want.

My gut almost got me into trouble there. 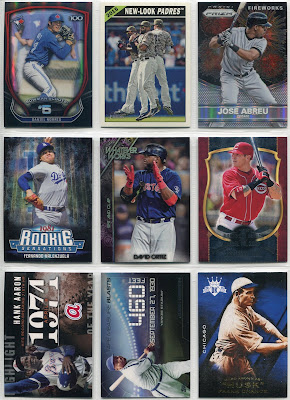 Dimes and quarters for a slew of 2015 insert needs.

The only halfway pricey member of this bunch was the Prizm "Fireworks" Jose Abreu insert, which was a buck...wait, did I just pay a whole dollar for a Prizm card? (Gut: "Hey, it's a nice card, what can I say?")

I think my gut, for whatever reason, may have just been drunk on Jose Abreu, because... 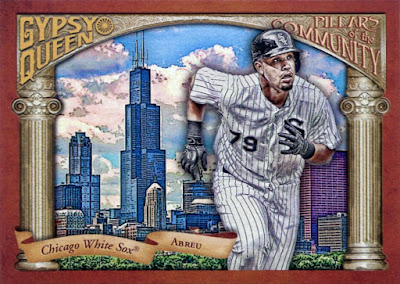 ...a lot of my biggest finds of the day ended up featuring Mr. Abreu, including this incredibly beautiful GQ insert.

Featured here is the masterful skyline of the city I know and love so much, which, I think, made this a steal at only a dollar. 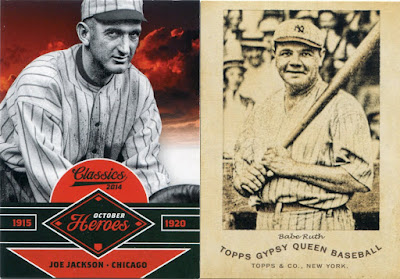 Here's another pair of recent inserts of hard-hitting contemporaries.

The Shoeless Joe was a quarter, and The Babe -- a dollar -- is yet another example of the beauty GQ can have when it puts its mind to it. 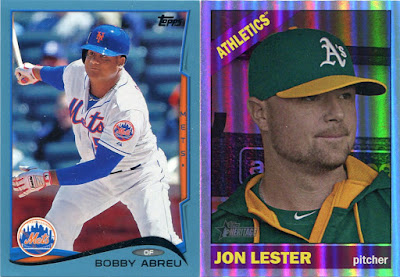 Heck, I'm already starting to forget that Bobby Abreu was ever a Met, though that blue-bordered beauty refreshed my memory. Jon Lester didn't get many cards as an A (I only owned one other one before Sunday), so I jumped at the chance to secure his shiny Heritage parallel for fifty cents.

Not bad for a couple prime Short Term Stops nominees. 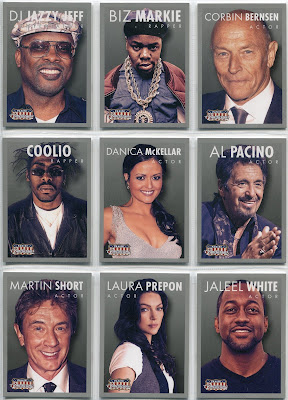 Fresh Prince cameos, YOU GOT WHAT I NEEEEEED, Roger Dorn, Kenan & Kel theme song (Hey, I lived on Nickelodeon when I was a kid), Winnie Cooper, ATTICA!, I MUST SAY, Donna, and, of course, Urkel.

And all for just ninety cents! 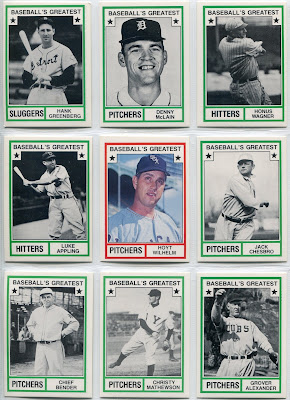 But back to baseball, and, specifically, some of the game's all-time greats.

I had to make two separate trips to one guy's dime boxes because of the traffic at his table. I don't know why, but my gut was telling me that there was something, something good in the boxes I didn't get to dig through that first time around. I strolled around the room and hit some other tables while I waited for the table to open up.

It finally cleared about a half-hour later, and I found that my gut was indeed right. During the return trip, I dug up a giant stack of these early '80s TCMA singles, which, as I've noticed over the years, are tough finds. There's lots of guys in this checklist -- like Chief Bender and Jack Chesbro -- that you don't often see.

And, just when I thought one new Hoyt card was enough... 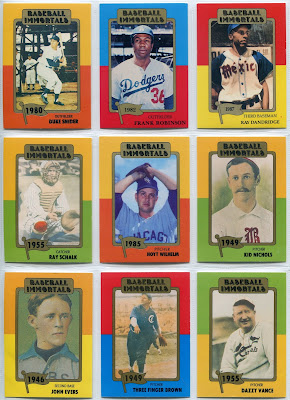 ...a second one popped out of the dime box, along with another big stack of colorful TCMA greats.

Like the other TCMAs, you won't find cards of Kid Nichols and Dazzy Vance very often. I very nearly went out and bought that Frank Robinson after seeing it on Night Owl's blog not too long ago, because you can probably count Frank Robinson's Dodger cards on one hand.

In hindsight, I guess it's a good thing I waited. 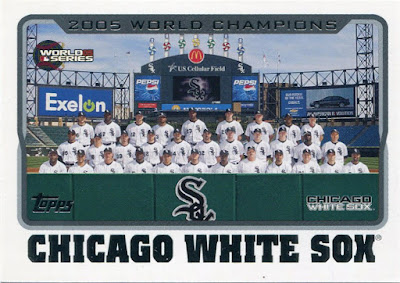 But the dime box surprises weren't over just yet.

The last dime dig of the day resulted in something I'd actually been hoping to find for a while now, a near-complete (sans maybe two or three cards) 2005 Topps World Series White Sox set. 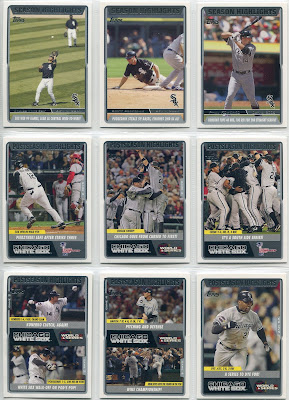 This was a special season for me, as it's the only championship a Chicago baseball team has won since 1917. I was in 8th grade at the time and remember going nuts with my fellow baseball-fanatic pals the day after they won it all.

Many of the cards, as seen here, highlight some of the team's best moments during both the regular season and the playoffs. 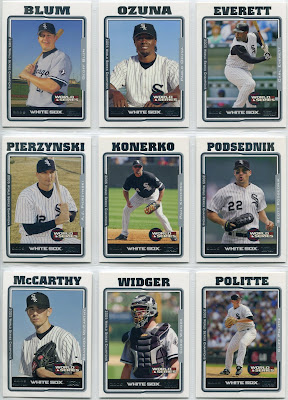 What I like most about the set is that it features a lot of the bench players/reserves who made that team so special, guys who wouldn't normally get recognized by Topps.

Sure, you've got the big stars, the Pierzynskis and the Konerkos, but you've also got the Carl Everetts, Chris Widgers, and Pablo Ozunas. (As well as the baby-faced Brandon McCarthys.)

To this day, I collect otherwise obscure guys like Cliff Politte because of their presence on that championship club, which was why I was so excited to see these fall out of a dime box. 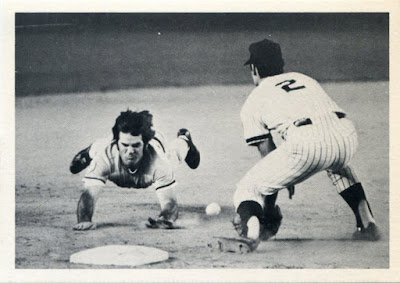 Another set popped one at a time out of a dime box earlier in the day, and this one was 100% complete.

I finished off the 120-card 1985 Topps Pete Rose checklist in one go on Sunday. Charlie Hustle might not be the most pleasant guy around, but he played the game the way it was meant to be played.

For that reason, I collect him, which made it almost a reflex to pick this set up when the opportunity presented itself. 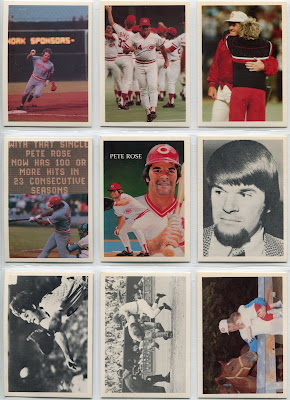 Single-player sets can be iffy, and, yes, there are a lot of cards of Pete Standing Around, Pete Squinting His Eyes, etc. in this set.

But single-player sets can offer a glimpse of a guy you wouldn't see anywhere else, which is why I snapped this one up. 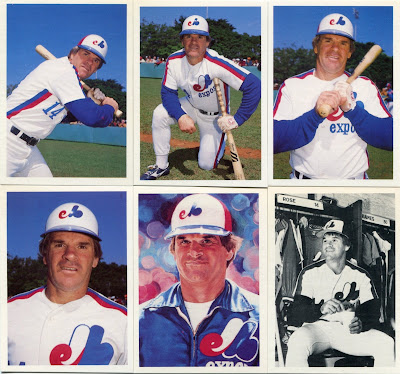 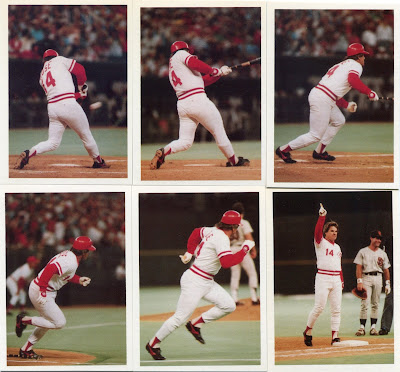 I especially enjoyed this time-lapsed mini-series of Hit #4,192 Pete.

Note the Steve Garvey cameo in the bottom-right. 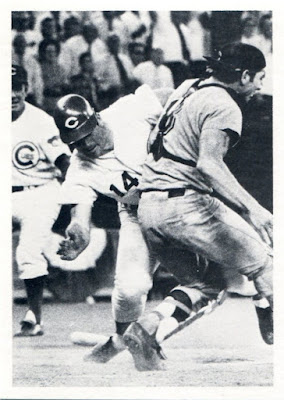 My favorite of the bunch, however, was Pete Barreling Into Ray Fosse.

This perfectly-timed image -- see the exact moment Fosse's shoulder separated! -- is the first I've seen of the (in)famous Rose-Fosse All-Star Game collision on a baseball card. Surprising, considering how iconic of a moment it's become in the history of Charlie Hustle.

I didn't need my gut to tell me to pick up this Pete Rose set, but, all in all, I think my gut did a fine job in guiding me through Sunday's card show.

Maybe I should start listening to it more often.
Posted by Nick at 6:43 PM

Great cards all around. That's twice this week I've seen that "Winnie" card. You would think that someone close to her age would've known she grew into to hot babe. At 41 she looks good. You always seem to kick butt at the shows you attend.


BTW, I am actually mailing your "package" tomorrow, that one I've been sitting on for some time.

Great finds, as always. I love the Sox World Series set. I wish they would get back to doing more sets like those.

All good stuff those TCMA cards are awesome but thank you for making me realize I missed that Satchell from this years GQ.

Gotta love the "gut" at card shows. I think I learned my lesson at my last card show...come with a list and hit the dime boxes first!

Man, looks like you hit the jackpot with that haul! The Rose cards are nice and old school guys on modern products is always great too see. That Paige Gypsy Queen is a real beauty.

The only cards I have of Blum as a member of the White Sox are highlight cards - that one from the World Series set passes for a regular base card in my book. I'm off to land me a copy!

TCMA - so many great cards released, some of my favorite dime box finds!