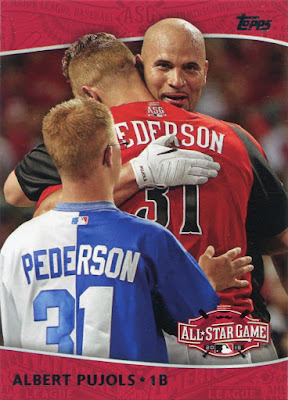 I'm really not much of a "latest and greatest" person.

The type of phone I own is probably sitting in many dumpsters and landfills right now. I have no clue what qualifies as Top 40 music these days. I don't keep up with the hot new sitcoms on the telly. Celebrity tabloids? Forget it.

When it comes to baseball cards, I like to think that I'm not much for the latest and greatest, but, in reality, I am. Vintage is king -- because I'm still an old soul -- but, at the same time, I get excited when the new Topps sets come out, or when someone throws a bunch of newer cards at me in a trade package.

The latter happened with a mailer I received from Kerry of the great "Cards on Cards" blog recently. This Pujols insert actually arrived in a separate PWE, and I love it because it features cameos from both Joc Pederson and Joc's brother Champ, who is diagnosed with Down syndrome -- a disease that is one of the main focuses of Pujols's foundation.

Last year's Home Run Derby was actually pretty memorable (when's the last time you could say that about a Derby?), and this was one of the reasons why. 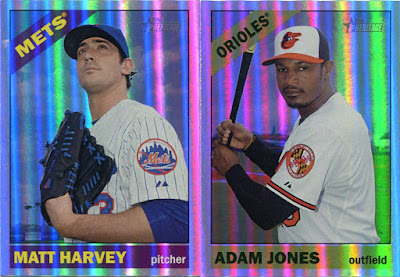 I probably shouldn't like these shiny Heritage gimmicks of Matt Harvey and Adam Jones. I mean, refractors weren't a glimmer in anyone's eye in 1966...but I have to admit that they're actually kinda cool.

I feel like I'm going to be exiled from the vintage circle by saying that, but it's true. 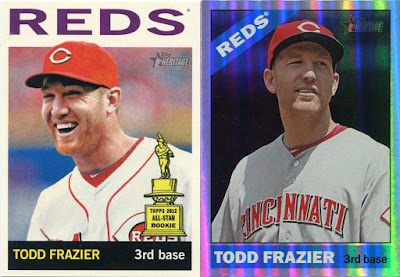 I received this package before The Toddfather was dealt to my hometown White Sox, which means that I'm even more excited to be collecting this guy now. 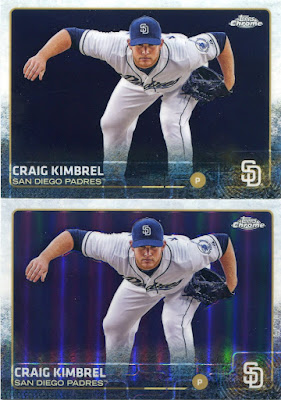 I often wonder why I get so giddy when I get "latest and greatest" cards, like this sweet Craig Kimbrel base/refractor combo from 2015 Chrome.

I think it's because I have this weird feeling that if I don't get these cards now, then I never will. Like everything from 2015 (and before) will suddenly fall off the face of the earth when the 2016 cards start coming.

I sure hope people don't forget about 2015 in about a month or so, because it really was a great year for cardboard. 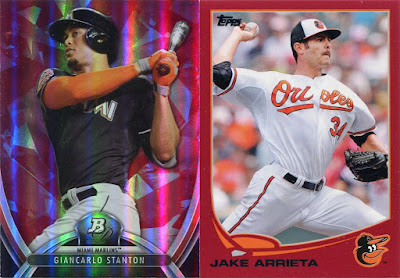 Unlike most of the longer-tenured players I collect, most of the guys Kerry sent are fairly new additions to my binders.

My Stanton collection has eclipsed the 100-card mark despite the fact that I've been collecting the guy for barely over a year. I now own about a dozen Jake Arrietas, and I expect that number to rise at a painfully slow pace because he's a hot commodity in the Chicago card market now.

Actually, probably the nationwide market, too, now that I think of it. 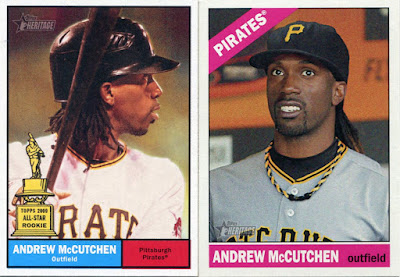 My McCutchen collection also hit the century mark recently, but both of these Heritage singles were new to me.

I still say he needs to bring back those dreads. 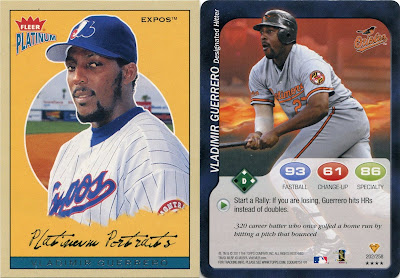 Ah, but Kerry didn't forget about my oldest and most extensive player collection with Vlad here.

The Topps Attax card is actually a sunset issue featuring Guerrero's brief time with the O's that I never thought to track down.

I should really learn how to that game works one day...and then I can join maybe the two other people that actually remember how to play Topps Attax. 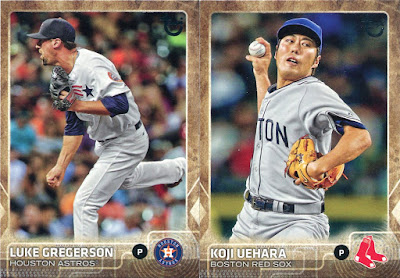 This trade was born out of the fact that I claimed these two Update throwbacks on Kerry's blog.

Throwbacks rule, and always will. 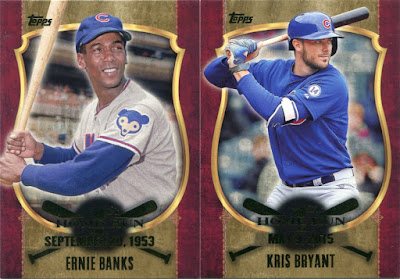 I also specifically claimed this pair of "First Home Run" inserts from Kerry.

But, you know, no pressure, Kris. 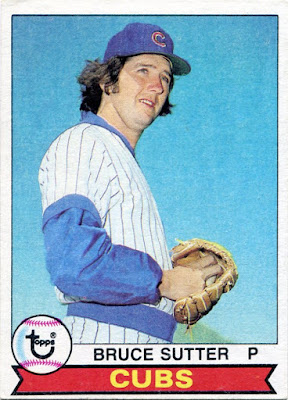 But through it all, Kerry's grand finale was a sacred piece of vintage.

This '79 Bruce Sutter was a "Dime Box Dozen" need prior to this package, and one I was shocked to find out I didn't already have. (I think there might be a gigantic Bruce Sutter hoarder out there, because I also have yet to see a copy of his '77 Topps rookie in-person.)

I love both vintage and modern cards, but I could never see myself being exclusive towards one or the other. I could never collect just vintage because I'd feel out of touch with the current hobby. But, at the other end of the spectrum, I'd probably get bored being a pure "latest and greatest" type of guy. This package had the best of both worlds.

For me, the hobby is best with a healthy combination of old and new.
Posted by Nick at 5:58 PM

I love that Champ Pederson card

"Throwbacks rule, and always will."

Sadly, I went the Hobby route for update, so I missed out on those awesome retail inserts. Might have to hit the Wal-Mart in Waikiki next month :)

It was nice seeing Pujols back in the All-Star Game, something I never thought I'd hear myself say. And that was definitely a cool moment captured on a card.

I'm obviously of touch when it comes to the latest and greatest. This is the first time I've seen that 2015 Kimbrel. Off to COMC to find an affordable copy of that amazing card.

After watching the All Star Game this year, I began collecting Joc Pederson. The way he spoke of his younger brother, and so obviously loves him really moved me. The Pujols card is on my list now since it features both Pederson brothers.