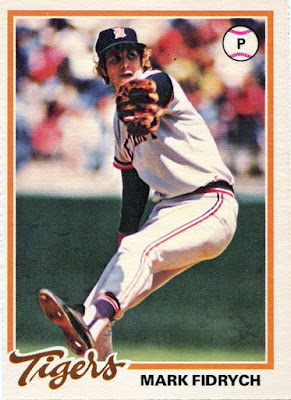 My dad and I both had to work on Christmas this year, which, frankly, sucked.

Spending quality time with the family is one reason I still have a gushy love for the holiday season, and it didn't quite feel like Christmas without hanging out with my dad. Our schedules didn't match up until last Sunday (the same day I hit the recent card show), and I was counting down every single day leading up to it.

Holidays, as I've learned with age, are about much more than gifts, but the fact of the matter is that my dad does have a penchant for masterful Christmas presents. You may remember the T206 Fred Merkle I received last year. So when my dad said he'd found something that'd blow that out of the water, well...I just couldn't wrap my head around what could be better than a T206 Merkle.

But more on that in due time. Meanwhile, my dad started out his array of Christmas gifts in a familiar place with The Bird here, a perennial favorite of both of ours.

I've had the standard copy of Fidrych's 1978 Topps card in my binders for a while now... 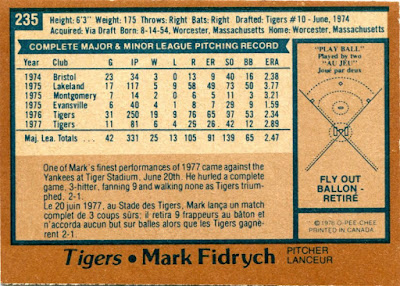 ...but my dad upped the ante by tracking down the OPC version of it, adding to (what I like to believe is) my Fidrych supercollection.

He did this despite his incredulity towards my OPC fanaticism. My dad and I see eye-to-eye on most hobby topics, but this isn't one of them. They're the same cards!!!!!, he often says. No, Dad, I say, they're the same cards with FRENCH ON THE BACK. That's everything! 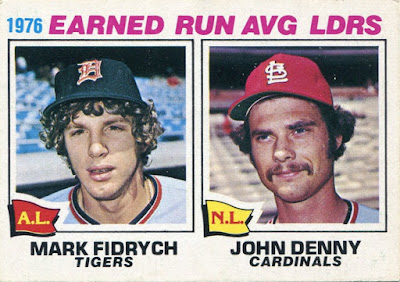 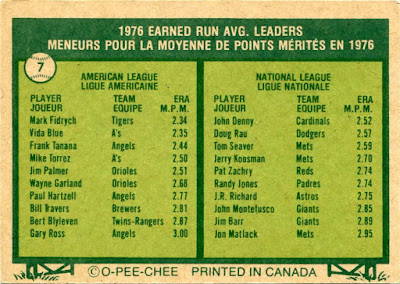 My dad climbed aboard the Fidrych OPC train once again by nabbing the French version of The Bird's 1977 League Leaders card.

Sorry, John Denny, but anyone paired up with Mr. Fidrych is an afterthought to me. 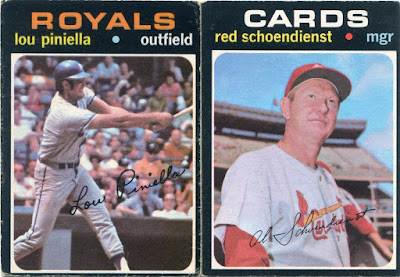 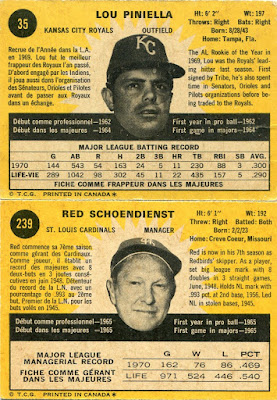 I'm paraphrasing my dad here, but he's said to me on a few occasions that the 1971 OPCs are really the only ones that matter.

The yellowed, floating-head backs are what do it for him, and he backed up that claim with these Sweet Lou and Red Schoendienst Frenchies. I'm in unanimous agreement with him that '71 OPCs are the best OPCs.

But I'm not giving up on converting my dad into a full-on OPC devotee...yet. 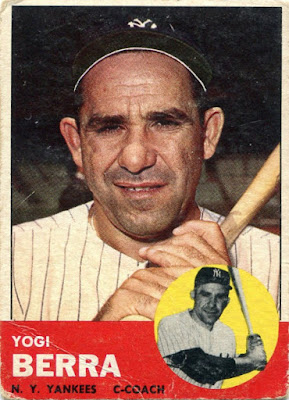 My dad came out firing with Yogi here. This is only my second real Topps card of the late great, and my first of him in the Yankee pinstripes. (The other being his legendary Short Term Stops/sunset issue as a Met in '65 Topps.)

You know it's a heckuva present when Yogi only gets the bronze medal. 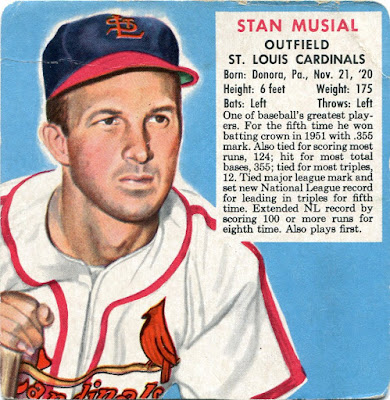 For a while, I thought this was the big card my dad had been promising, and, had that been the case, it most certainly would've fit the bill.

This 1952 Red Man of Stan the Man is a thing of beauty, one of those cards that you might admire from afar but never actually dream of owning. It's vintage, it's an oddball, it's Stan Musial. It hits all the checkpoints of a grade-A Christmas present.

But I can honestly say that it was a distant -- and I mean distant -- second in the voting this year.

So what came in first? 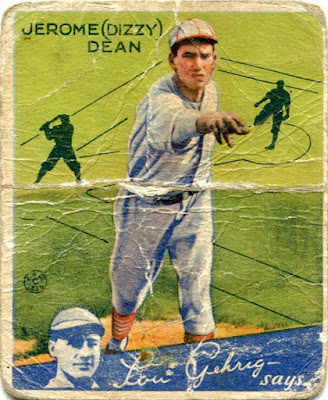 Now, I'm not the type of person who curses very much, and I certainly wouldn't hurl a string of obscenities in front of my dad, but I came very close to doing so once this fell out of the wrapping paper. I mean, just look at this thing. Can you blame me?

If Mark Fidrych was the first guy my dad told me stories about, then Dizzy Dean was probably the second. Much like my dad did, I've idolized Diz since an early age (one of the family cats is named after him) for his southern twang, his quotable quips (second only to perhaps Yogi), and, of course, his gift of being one of the best pitchers baseball has ever seen.

And, as if this card needed any incentive to be even better than it naturally is, it comes from the 1934 Goudey checklist, a year in which Diz, at his pinnacle, led the famous Gashouse Gang St. Louis Cardinals club to a World Series victory over the Tigers.

I'm still honestly in shock knowing that I now have a real Dizzy Dean card in my collection, but I know one thing: my best binder page needs revising. I now see why my dad was bragging about this gift in the days preceding our belated Christmas.

Superb haul Nick. Great and thoughtful gifts from your dad! The backs on the 71 OPC's are phenomenal.

Glad you liked everything and belated or not,thanks for a great Xmas!

WOW!!!! All of those are beauties, but you are right - the Dizzy card is incredible!

The awesomeness of that Dizzy is making my head spin! (See what I did there?)
Great haul!

Your Dad is quite possibly the coolest Dad I have ever heard of.

Yogi, Stan the Man, and Dizzy all agree!

Not surprisingly, I also agree with you on the 1971 OPC cards being the best. Love those yellow backs!

Whoa, I mean seriously - WHOA on these cards! They are incredible additions to your collection. But Nick, what I love the most is the relationship you share with your father. Your Dad is the epitome of cool. I enjoy your posts always, but my favorites tend to feature adventures with him. Thanks for sharing!

And here we thought you may have been naughty last year and was going to get a stocking full of coal.

Message for Mike: now how are you going to top that?

Sorry you and your father didn't get to hang out on Christmas. But golly gee... his gift to would make any son smile (well any son who had an appreciation for cards). My dad has never been into collecting... but after seeing this post... I kinda wish he did. But not for the cards... just because I'd think it'd be so cool to hang out on the couch or at a bar and debate whether or not OPC and Topps are the same. Great post.

Crap, those big 3 really are a big three. I'd almost kill to add the Yogi to my 63 Topps set while nabbing the Red Man Musial and that sweet Dizzy for my Cardinals PC. Those OPCs are sweet too. I think you may have the greatest dad in the history of dads.

Always rough not to be able to spend the holidays with family. On a side note, HOLY CRAP!!!! That Dizzy is a thing of beauty.

I'm completely screwed next year unless I can find a '52 Hoyt within my budget...as if!!

What a great gift! Mike, if you're looking to adopt any more kids, keep me in mind. ;-)

That Red Man Stan is cooler than the Fonz!

Awesome cards from your Dad! Just amazing! That Stan Musial is so pretty, but the Dizzy Dean is just fantastic!

Woah! What a Christmas!