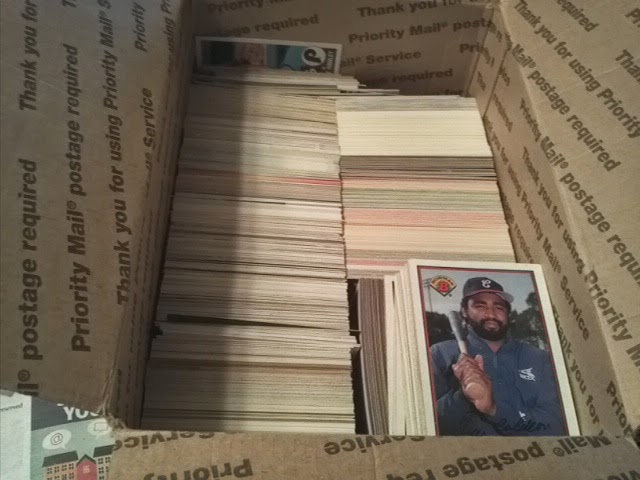 Aside from Opening Day and the postseason, the trading deadline is my favorite time of the year.

Today certainly didn't disappoint. Between guys like Lester, Lackey, Cespedes, and Price, a lot of big names switched teams this afternoon. These last couple months of the regular season should be a blast.

I guess it's fitting that I'd have a blockbuster of a trade package lined up on a day that featured so many blockbusters. I found this megabox waiting for me the very next day after I dug through a generous batch of cards from reader Wes.

This massive haul came courtesy of reader Michael. Let's see...it's the first, second, third, fourth blogger box he's dropped on me during my blogging career. This box was a little different than the others he's sent, however, because even Michael had no idea what was inside of it.

In the note he included, Michael said that he found this very box while preparing for a move. He decided to send it my way to clear out some space, figuring I'd be the one to like find some buried treasure within its reaches.

I couldn't wait to dig my teeth into this smorgasbord of cards. Since it's perhaps my least favorite set ever, the stack of 1989 Bowman worried me.

Once I powered through those, I found nothing but pure cardboard gold. 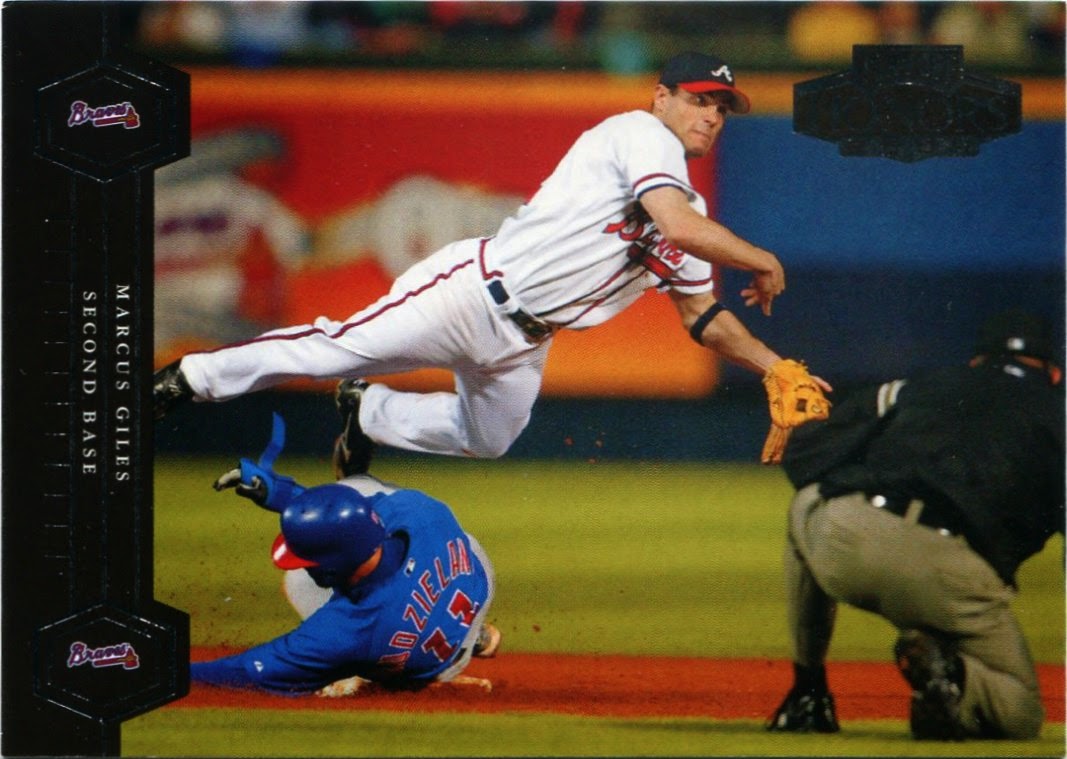 The fun began with this beautiful double play shot from the relatively forgotten 2004 Playoff Honors checklist. 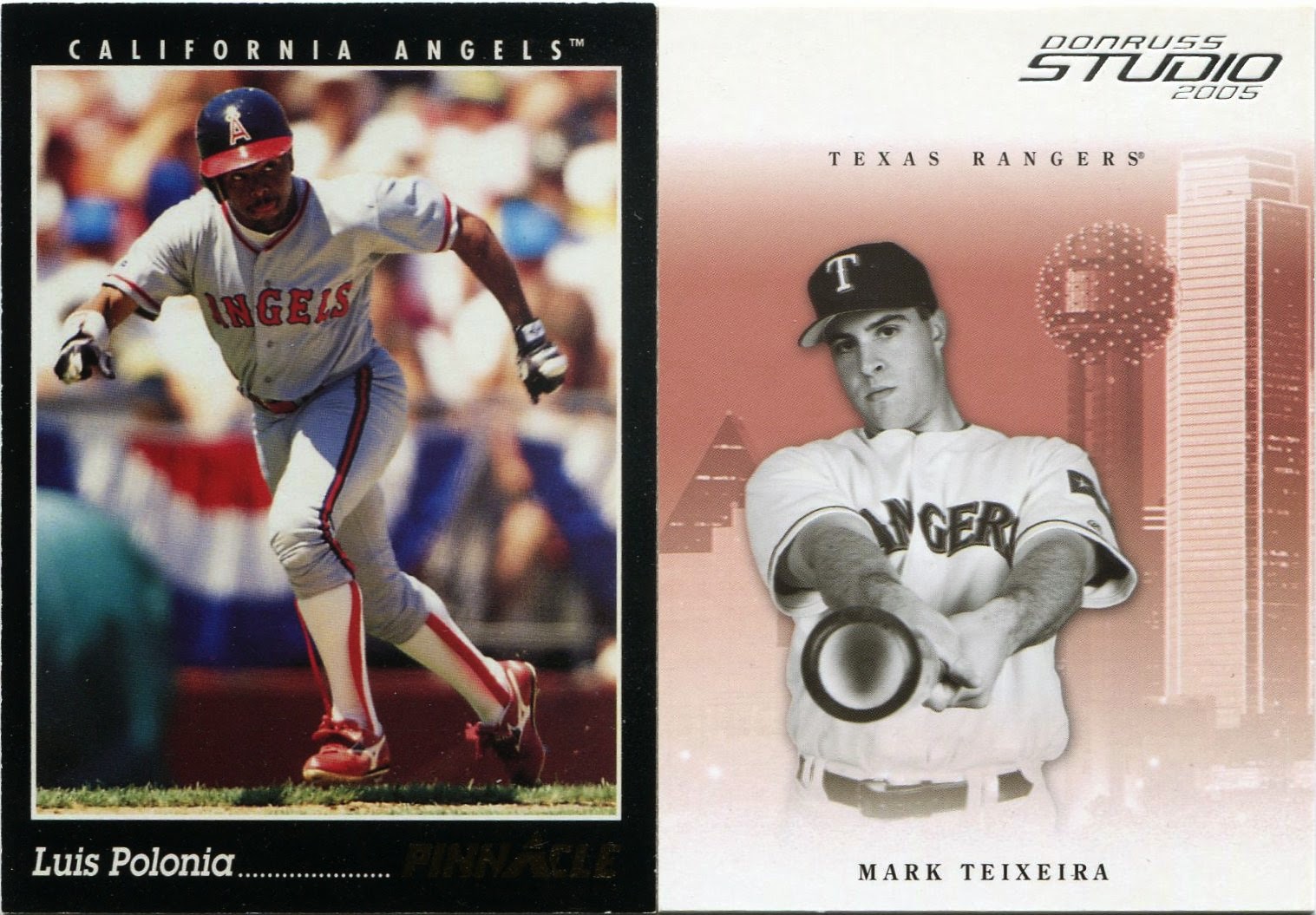 Mini-collection hits were in full force with this pair of throwback and bat barrel shots.

Lighten up there, Tex. 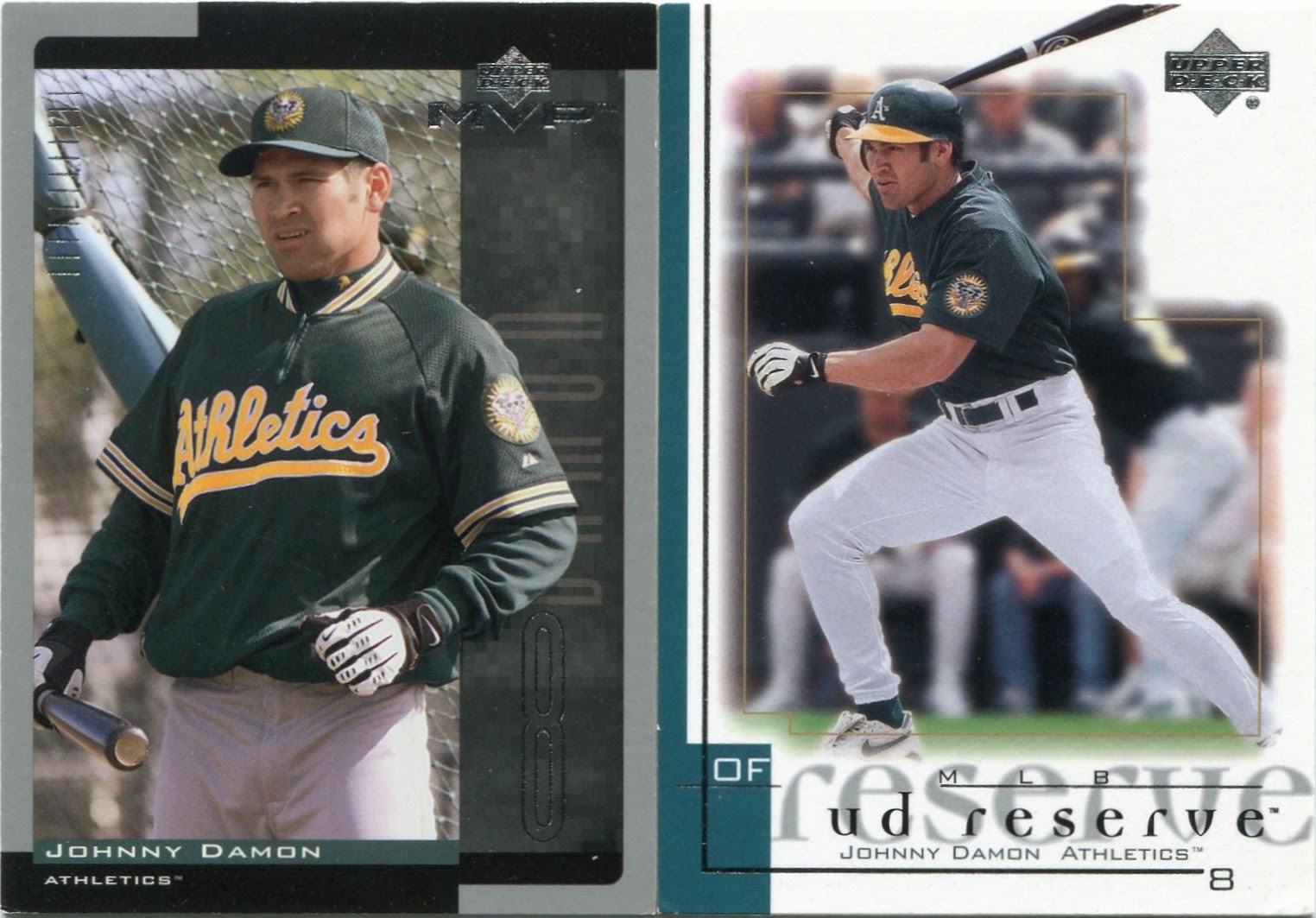 Of all the "short term stops" in my collection, Johnny Damon as an A is one of my favorites.

I can't quite put my finger on what it is, but something about seeing him in those green Oakland jerseys seems wildly unfamiliar.

He doesn't strike me as much of a Moneyball-esque guy. 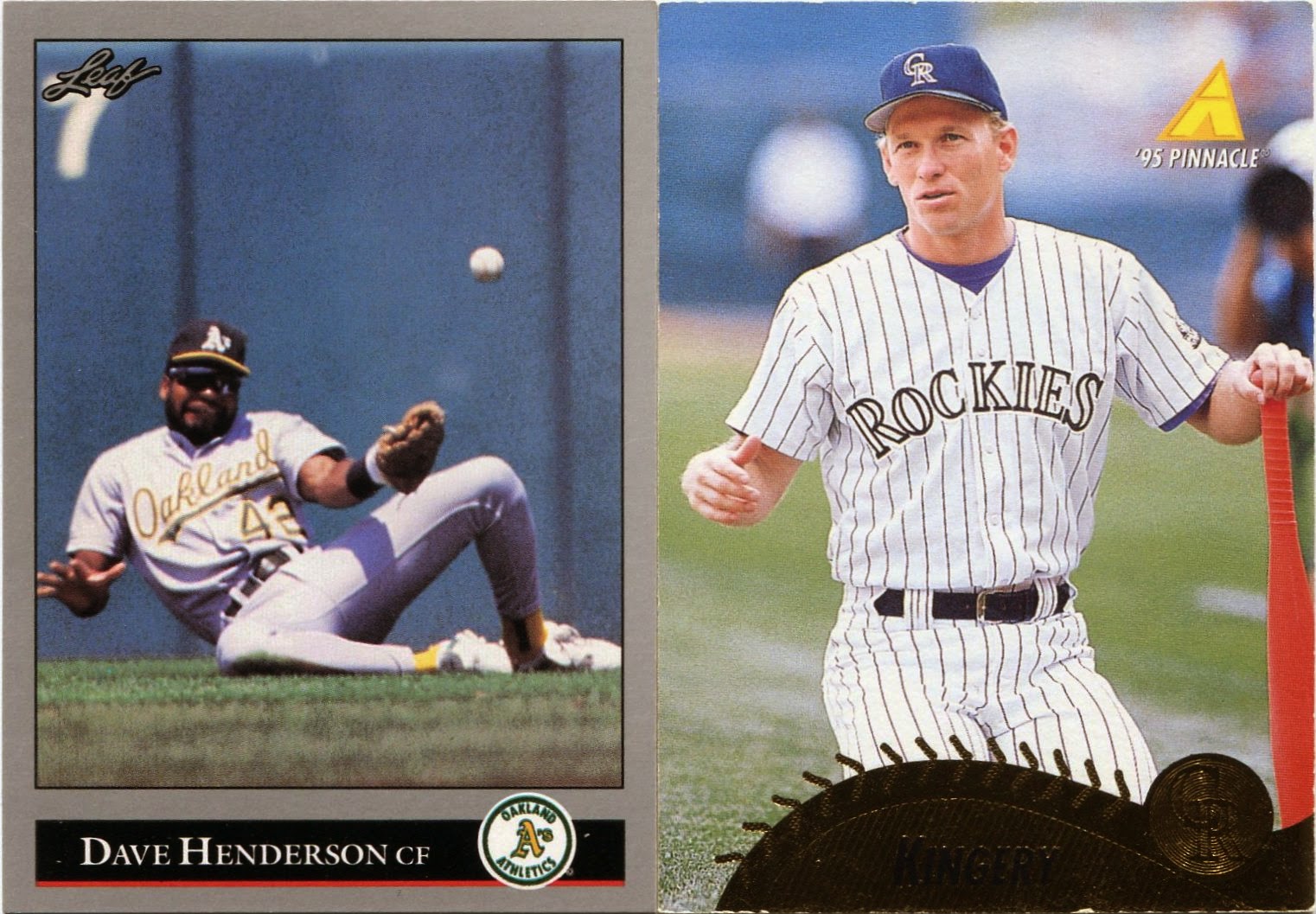 Random boxes like these are always bound to include a few fun pieces of cardboard.

It took a few glances at the Kingery to notice the bright red wiffle ball batt in his hand. 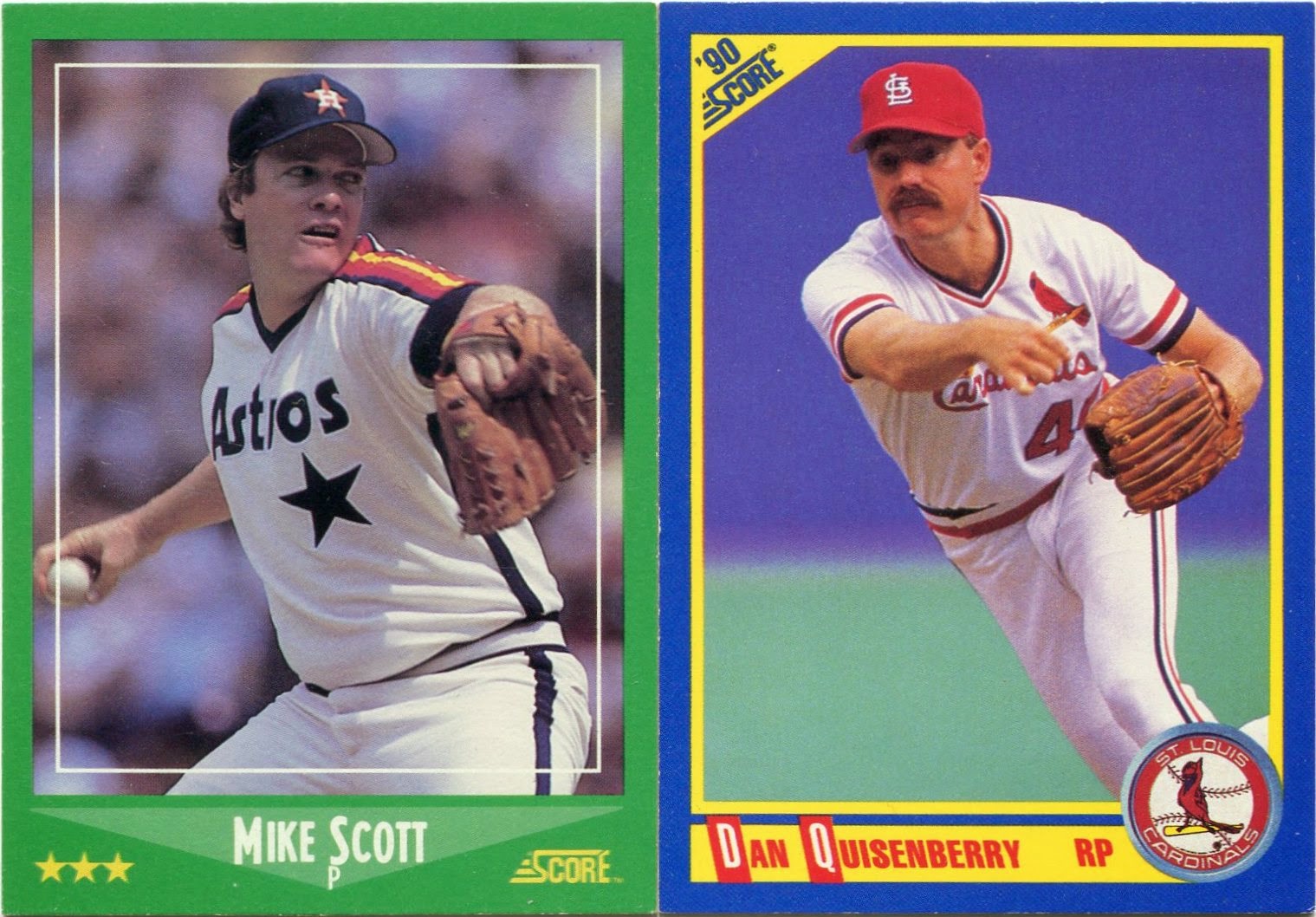 The hobby could use more multi-bordered sets these days. 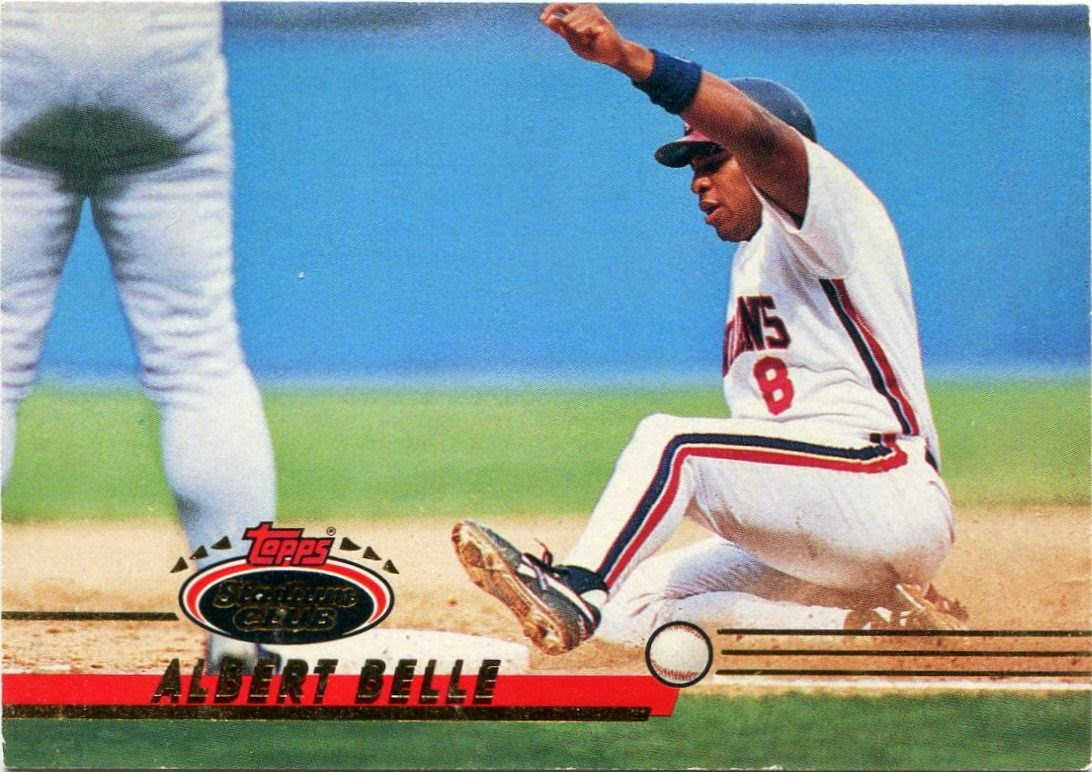 Digging through stacks of Stadium Club is always a treat.

I'm still waiting for the glorious day when I get to sift through an all-Stadium Club dime box. 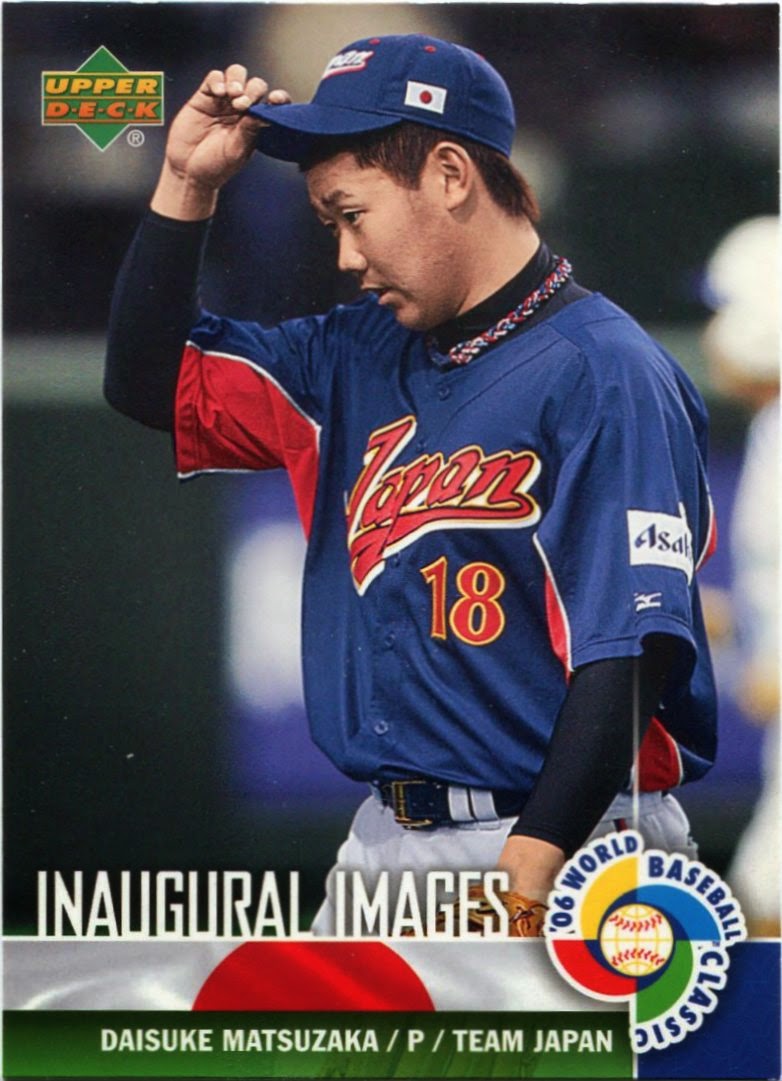 If you're lucky, forgotten boxes like these could include some big names.

I'm guessing that Daisuke Matsuzaka wasn't very well known when this card was originally thrown into Michael's spares. Granted, he's not much of a name now.

Had I found this box about six or seven years ago, though, I'd have a serious find on my hands. It's not much more than a footnote here in 2014. 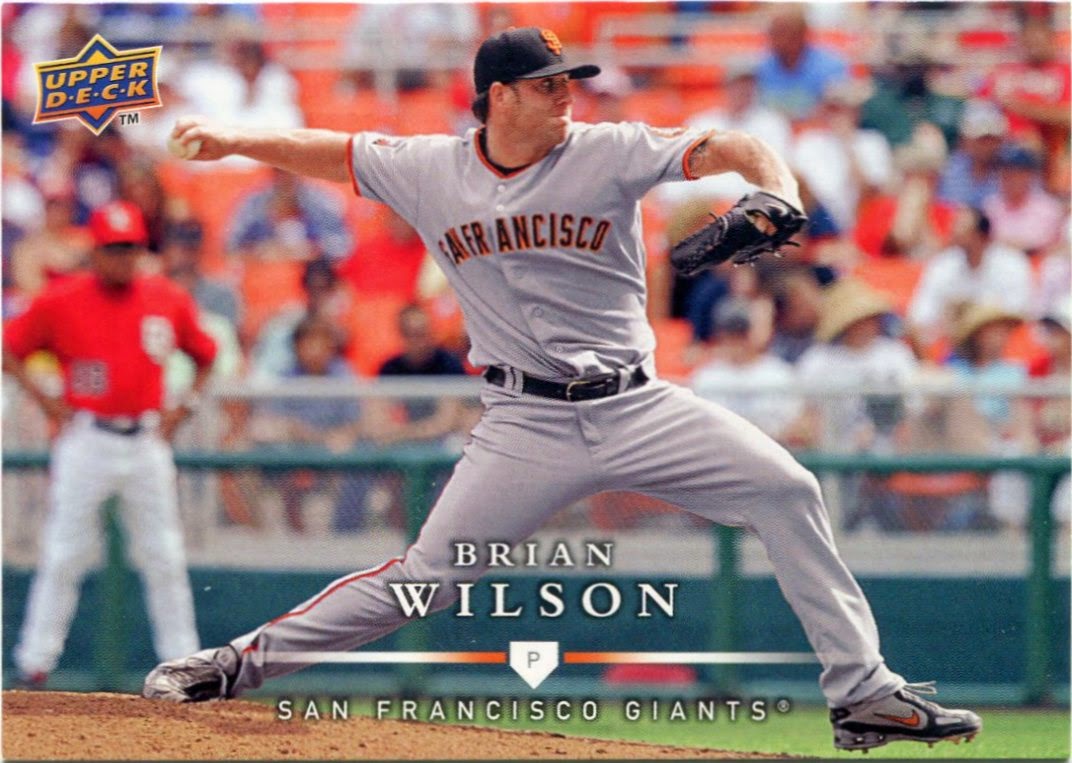 From what I could gather, I'd say this box was last touched around 2008.

These '08 UD First Edition Updates were about the most recent cards I found. 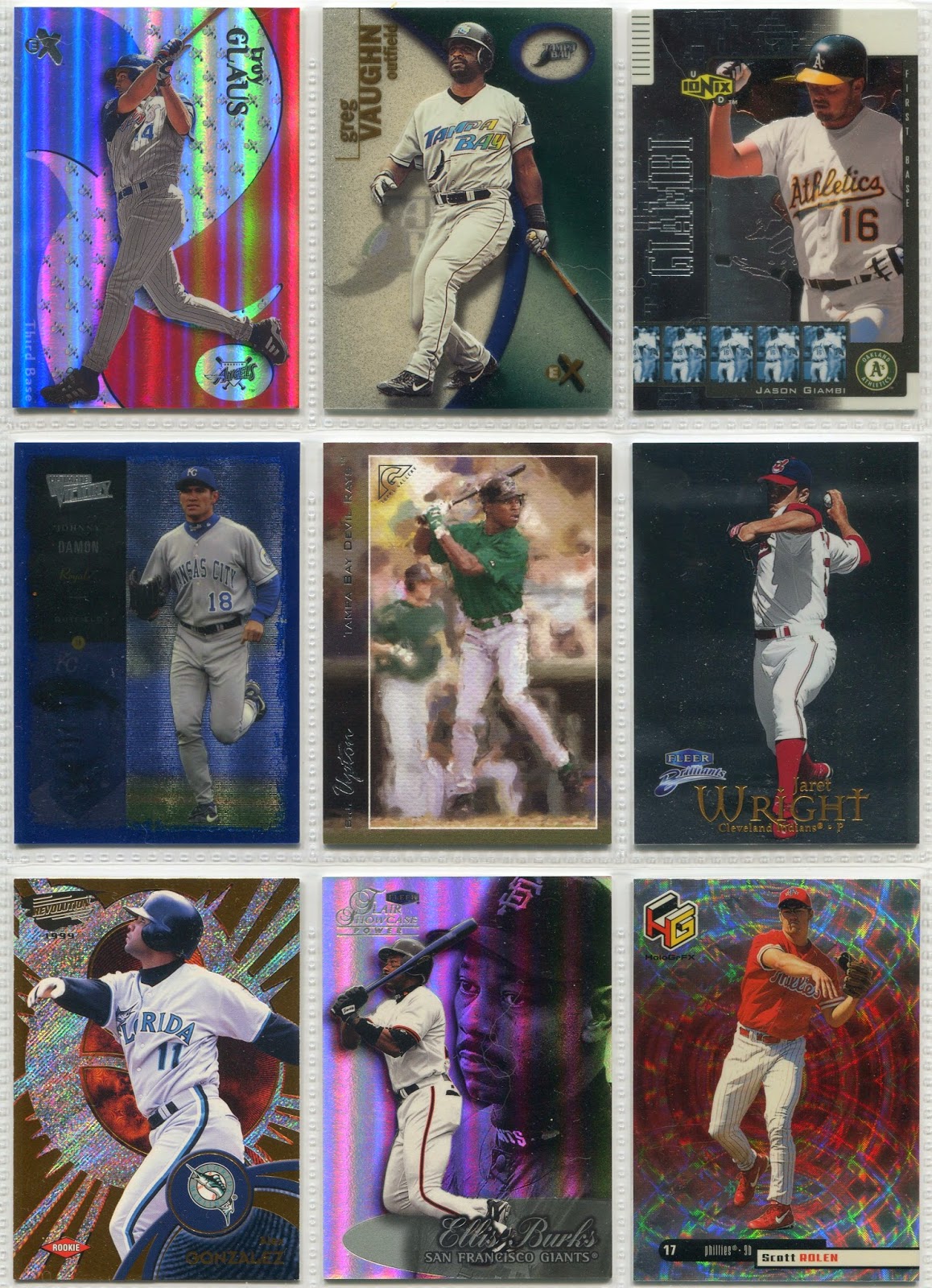 Michael's box included quite the variety of designs.

A lot of what I found came from the late '90s and early 2000's. Many of the cards came from sets didn't know existed in the first place, forgot about, or tried my hardest to forget about.

Designs like UD HoloGrFx fall into that last category. 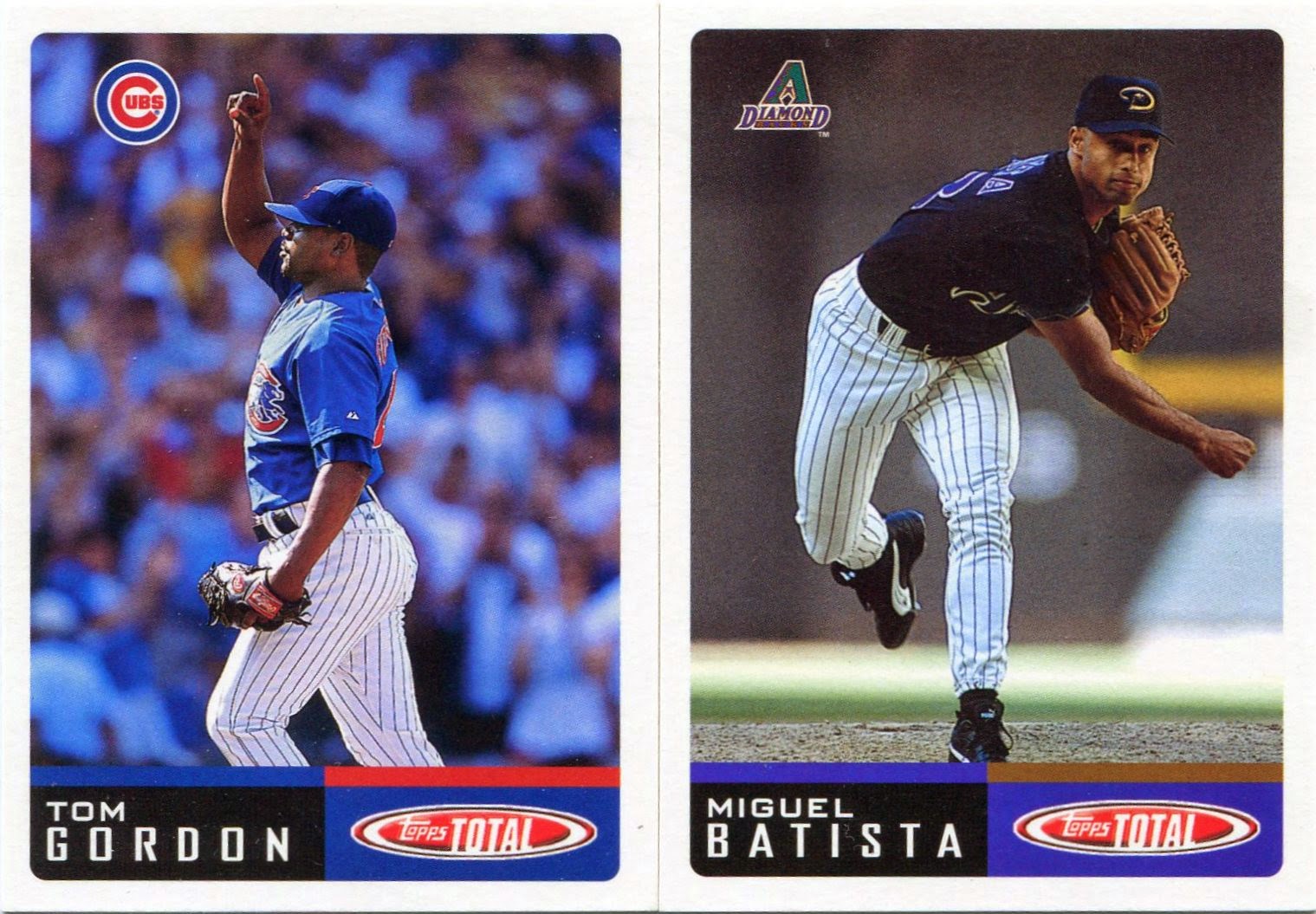 A decent chunk of those fell out of this awesome box. I'll spare you my Total nostalgia for now.

If you read this blog at all, I'm sure you've already heard it. 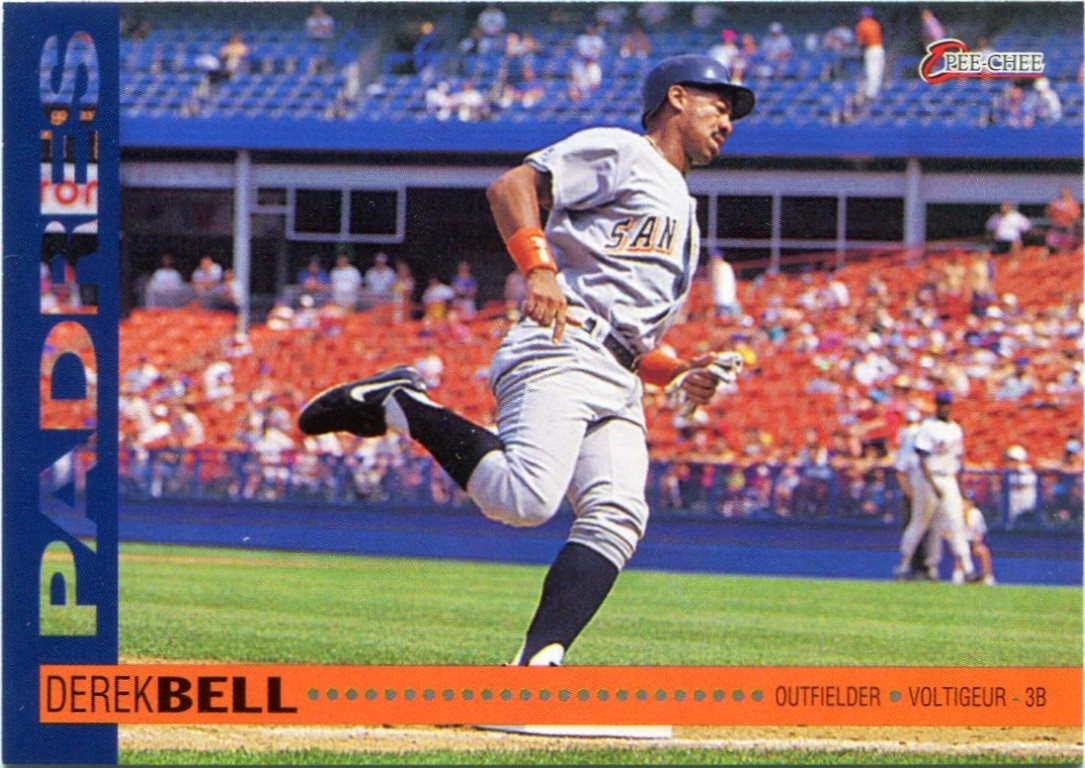 The thing that surprised me most about this box was the amount of oddities that fell out of it.

This sweet Shea Stadium shot is my very first card from the 1994 O-Pee-Chee checklist, one that looks nothing like the standard Topps layout from that year. 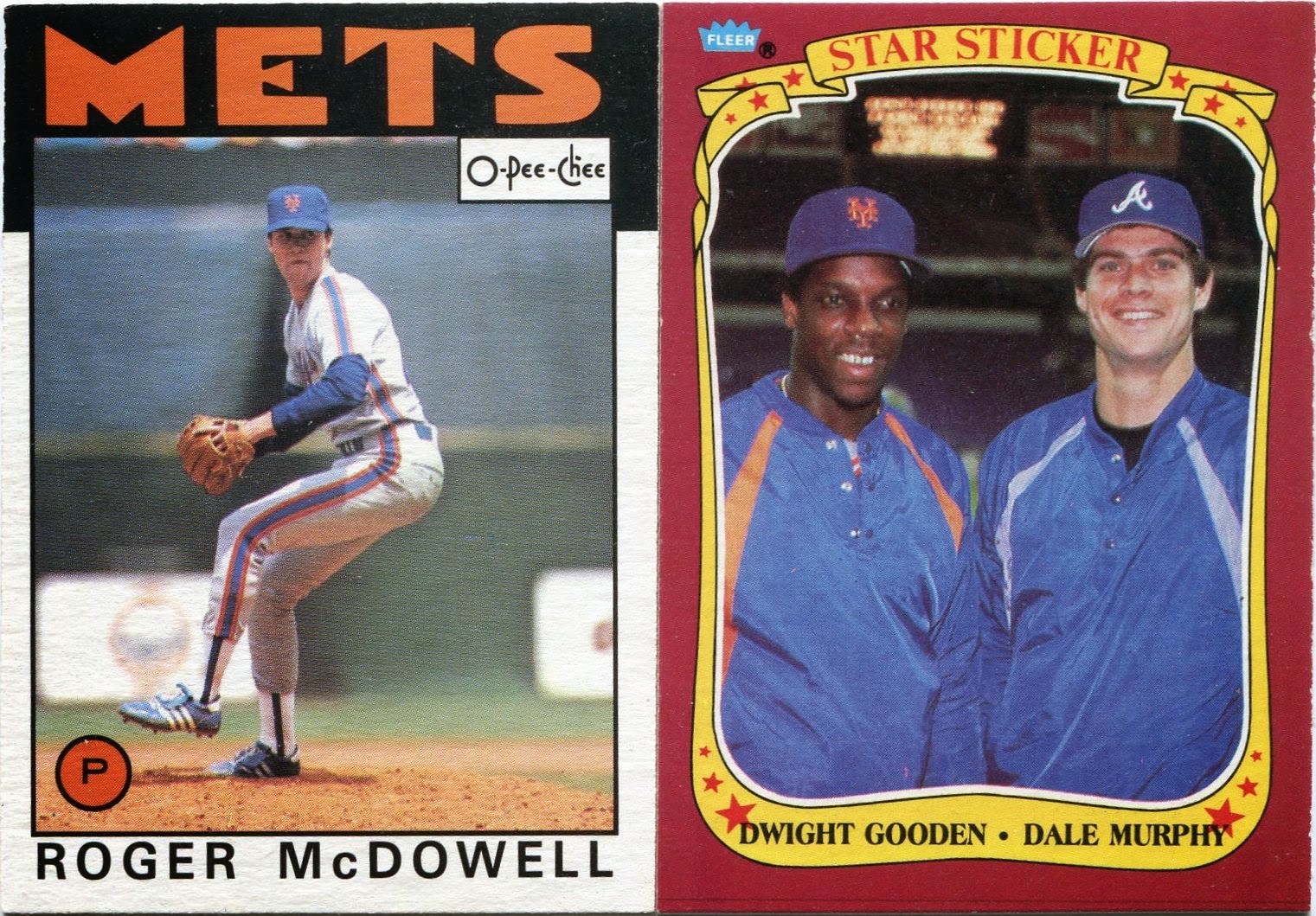 The box also included a few '80s oddballs, including a couple from OPCs days as Topps stunt doubles.

Now I can finally say I own a Canadian rookie card of The Second Spitter. 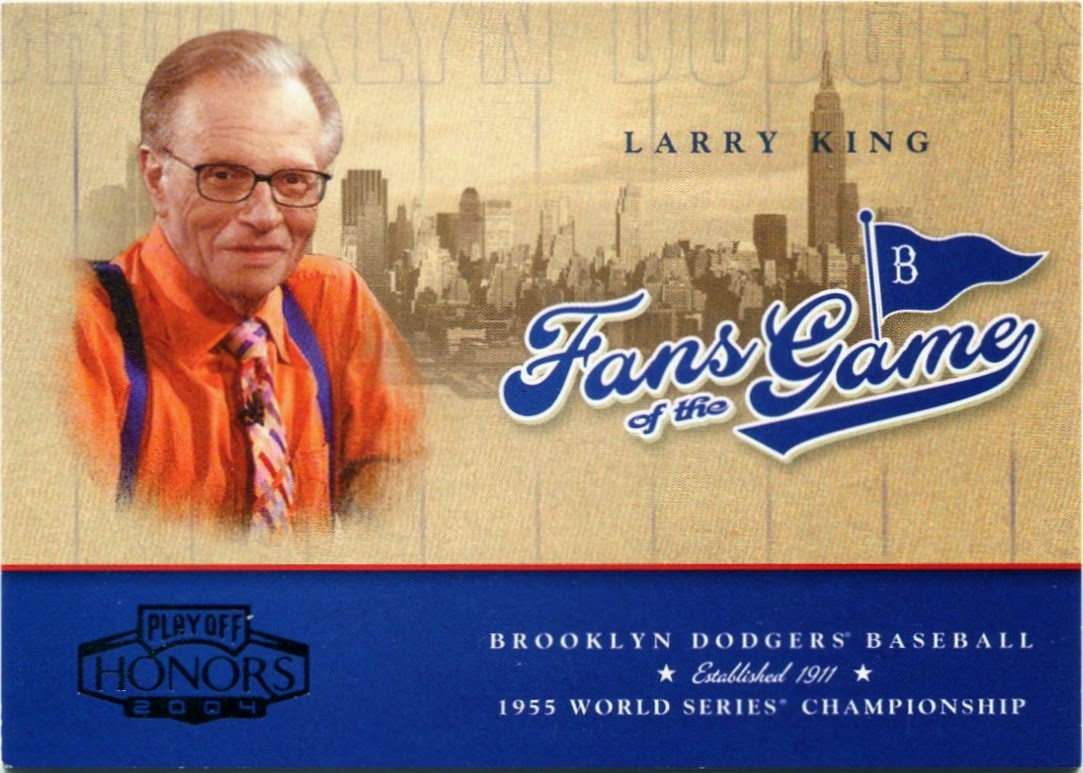 I guess Larry King is a Dodgers fan. 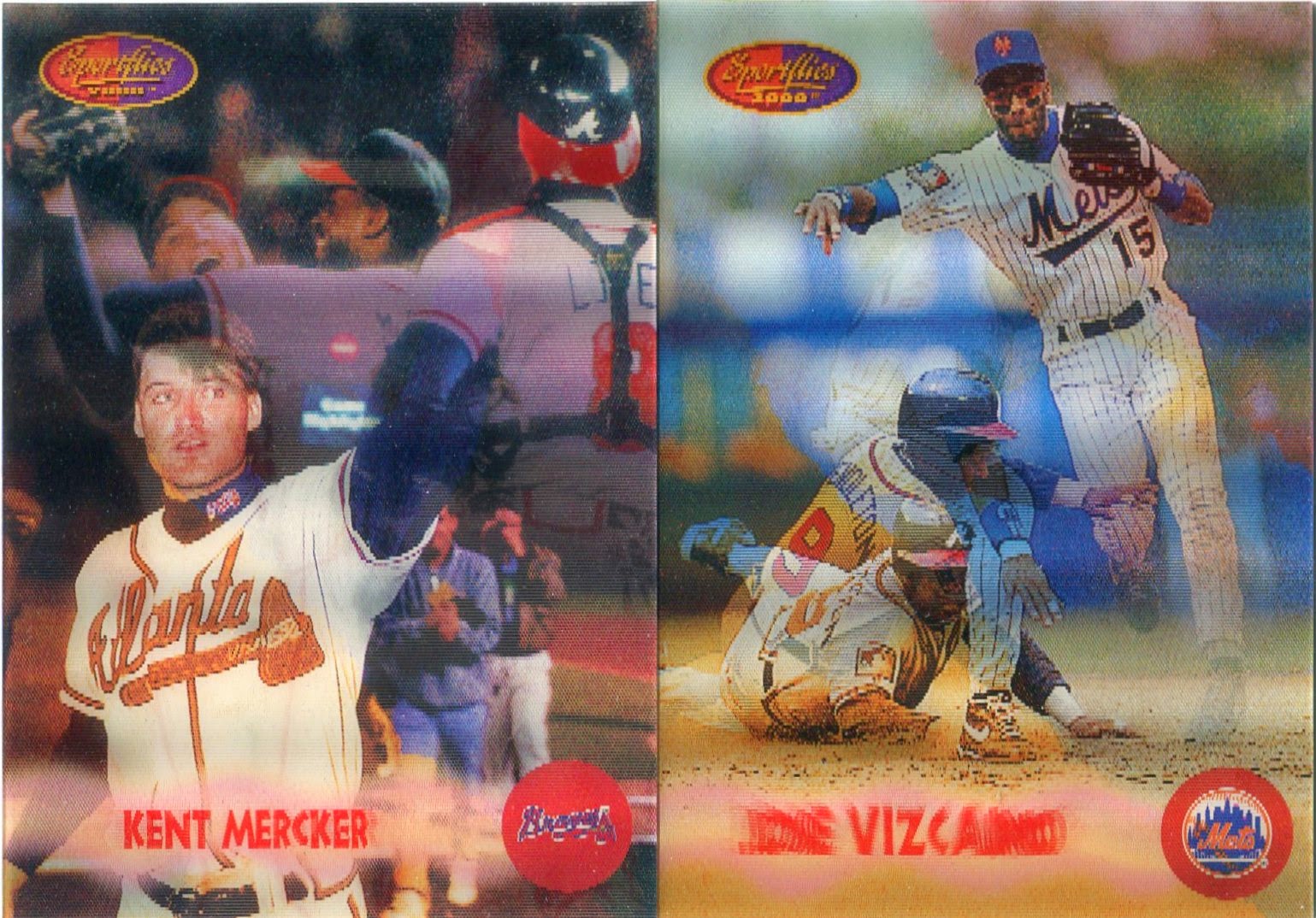 One of the best tips I ever got about blogging was to scan these 3-D Sportflics issues sideways and then rotate them later.

Now you get to see shots of Kent Merker's no-hitter and a Jose Vizcaino double dip in all their glory. 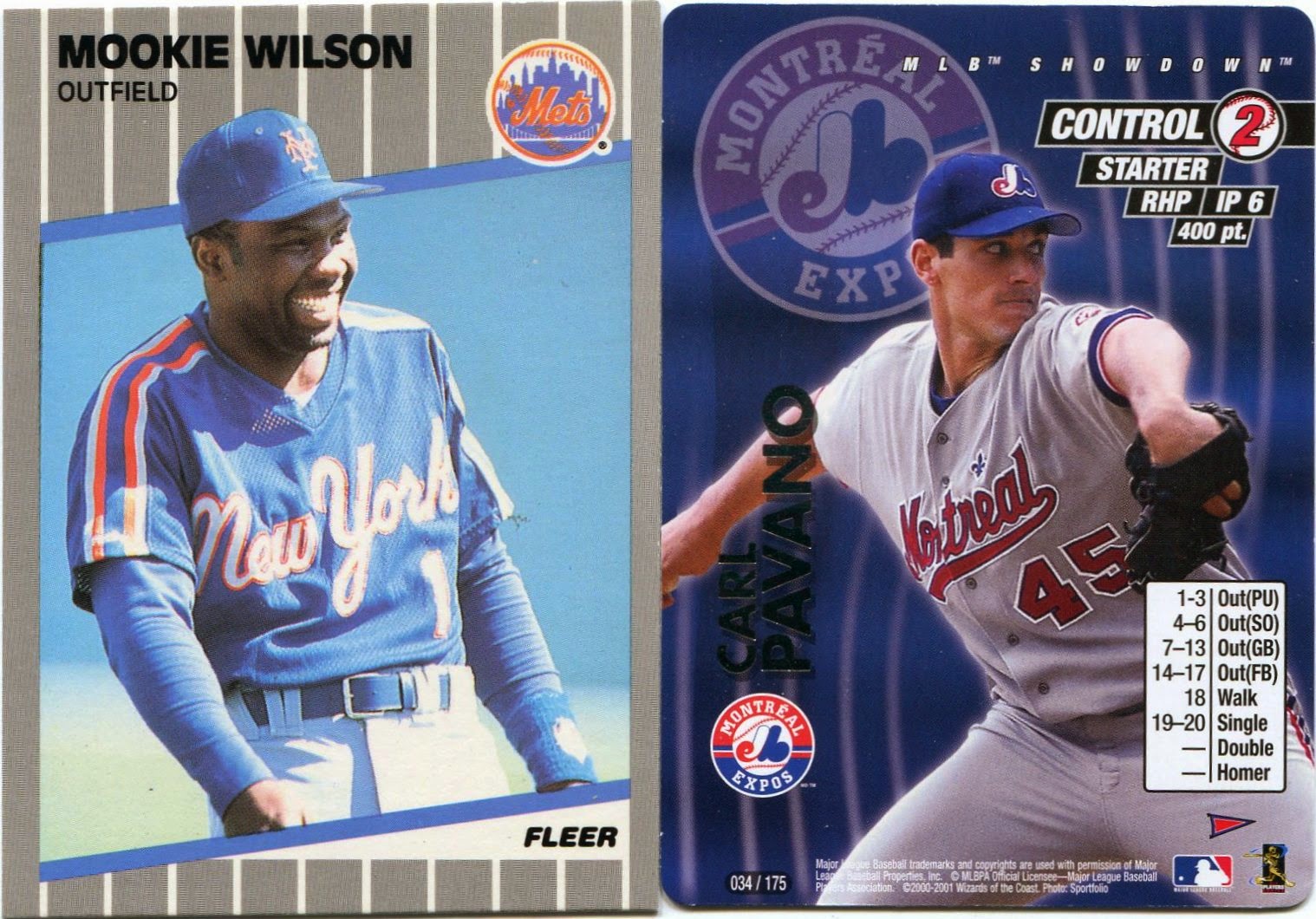 You can never go wrong with Mookie Wilson.

Oh, and by the way, that's an MLB Showdown sighting! I've mentioned my childhood obsession with the card game on this blog many times before. Without getting all into the rules and everything, I'll say that each pitcher's control ratings ranged anywhere from 0 to 6.

That should tell you how much the people at MLB Showdown thought of Carl Pavano. 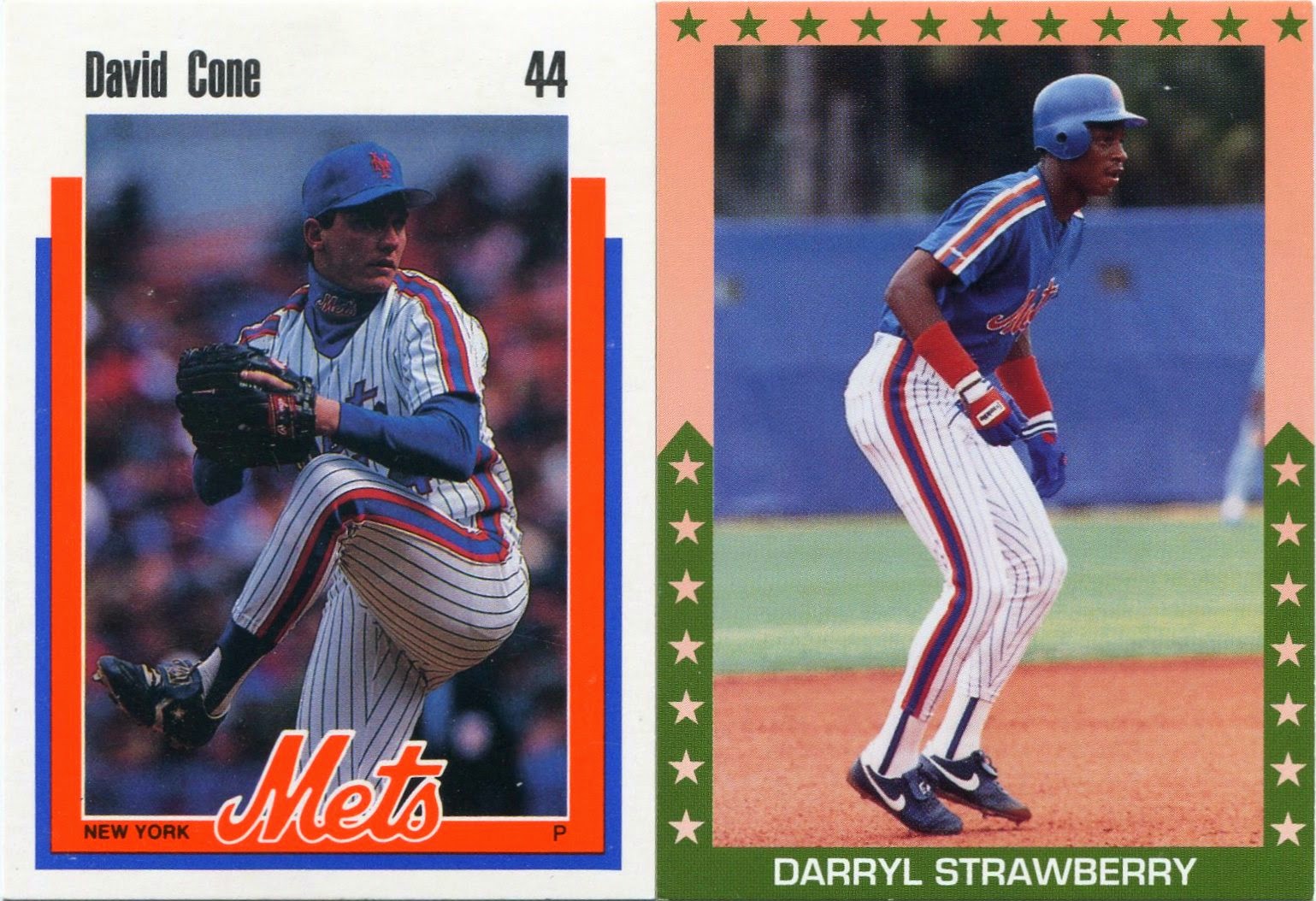 I have absolutely no information on either of these two Mets oddballs.

The designs certainly are groovy, though. 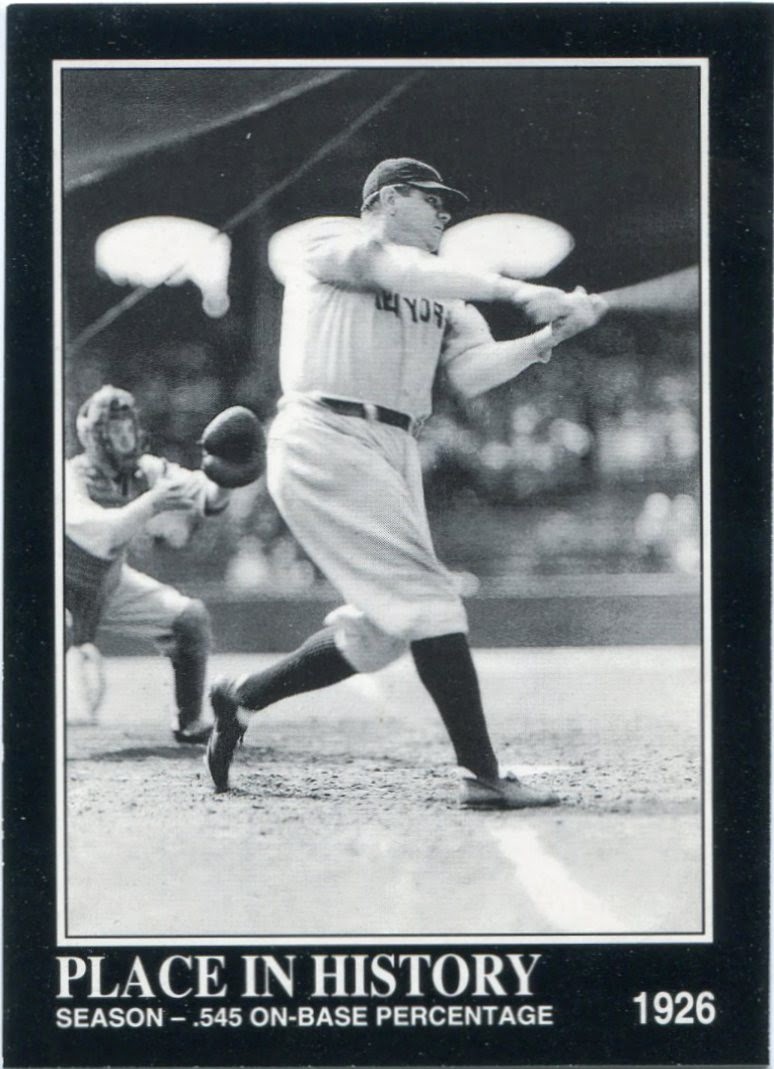 We'll close out this fun-filled box with this terrific shot of "The Great Bambino".

I've been finding these Conlon Ruths at an alarming rate lately. I'm starting to think they're some of the more common oddballs (oxymoron?) in existence.

The fact that Michael thought of me when he found this box was the real crown jewel of it all. That alone tickled me. The great cards I managed to discover inside were merely a bonus.

If you have a forgotten box like this sitting around in your house, dig it out.

You never know what kind of treasure you might find.
Posted by Nick at 6:40 PM

That Polonia is pretty awesome. Then again, I always love Angel throwbacks.

The David Cone card is from a 1989 stadium giveaway set manufactured by Kahn's Hot Dogs, which are (or, at least they were) the official hot dogs of the Mets.

It's a pity no one can be bothered to make very many cheap WBC cards any more. Instead Tribute is yer average sick mojo auto / patch / 10 pink purple hit hit hit set that costs way too much for anyone to be interested in cheap baseball cards of international players.

The more I see 94 OPC, the more underrated the set becomes to me.

Great box. I have that Tex in my Teixeira PC and I've always thought the same thing you wrote.