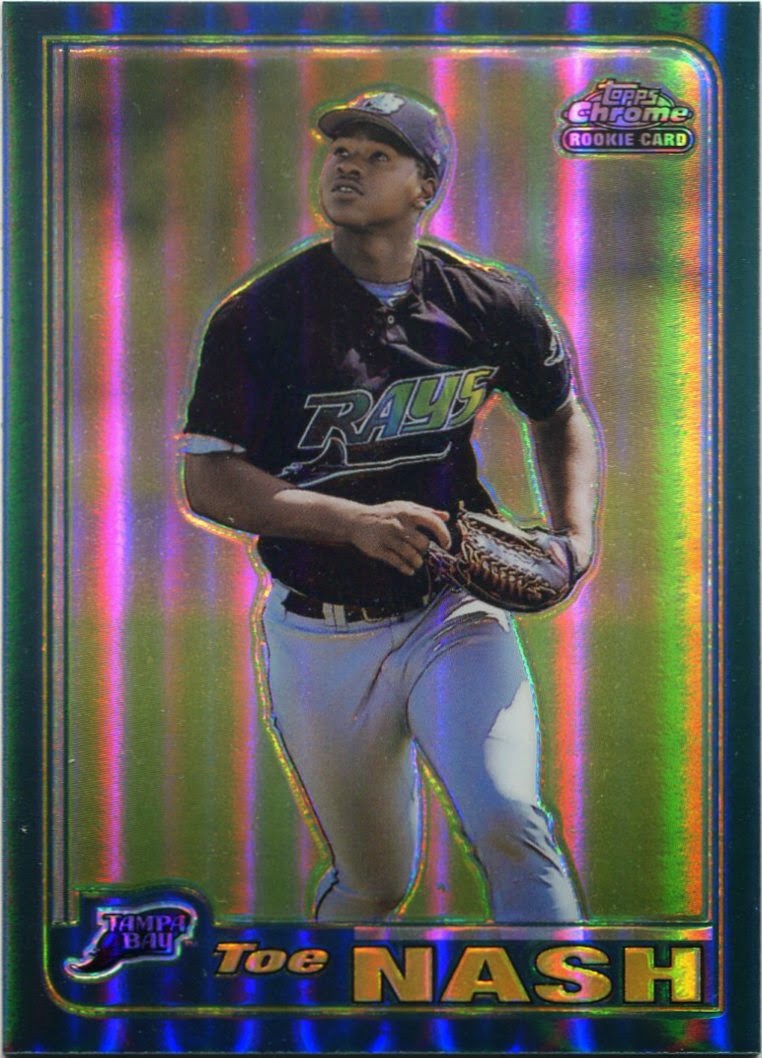 No other sport can match the stories of baseball.

You can stumble upon some of the most fascinating tidbits of history on an otherwise unspectacular summer evening.

That's exactly how I discovered the story of Greg "Toe" Nash.

On an ordinary night a couple weeks ago, I happened to find an article about the story of how Nash was discovered by the (then) Devil Rays. I don't know that I've ever heard a more captivating tale from the annals of baseball history.

Back in 2001, a Devil Rays scout went down to a backwoods part of Louisiana, looking for a kid he'd seen dominate a Little League game a few years prior.

He was directed to a local adult baseball league where the diamonds were literally carved out of cane fields. Many of the players worked in the cane during the day.

One of those players was "Toe" Nash, the boy who the scout had seen in that Little League game so many years earlier. 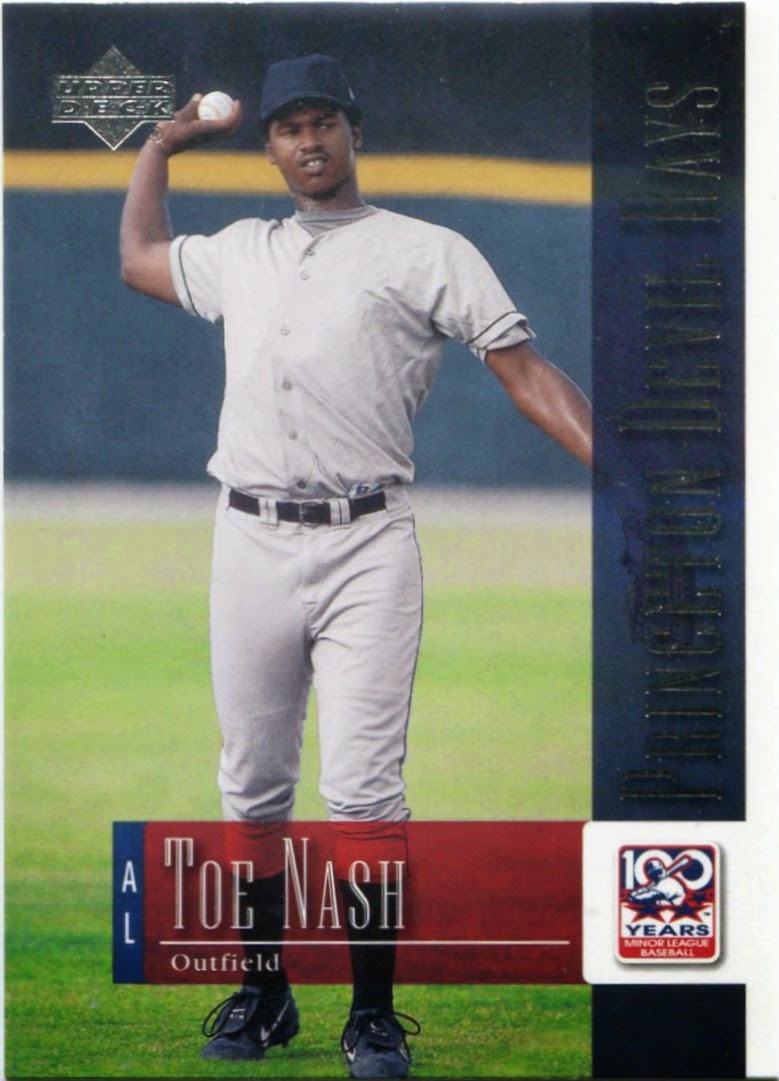 The scout soon learned that Nash had dropped out of school in eighth grade and had worked the cane fields ever since. He'd grown to six-foot-six and got the nickname "Toe" because of his large size-18 feet.

What the scout saw soon after seemed like something from a movie. Nash hit a 380-foot homer from the right side of the plate, then smacked another from the left that traveled over 400 feet. On top of that, he blew hitters away with fastballs in the 90s on the mound.

The scout had Nash try out in front of Devil Rays personnel a short while later. They couldn't believe what they saw. The potential for a guy who could hit for power from both sides of the plate and touch 95 on the gun seemed endless.

The Devil Rays agreed to sign Nash to a $30,000 bonus a few weeks later and sent him to work out with the club's Instructional League team in Tampa. He settled in as a left fielder, playing next to future stars Josh Hamilton and Carl Crawford in the outfield on that rookie squad.

Being from such an extremely rural area, Nash wasn't highly socialized. He couldn't read or write and had to be told how to order a pizza from the local Domino's on one occasion.

After reporting to spring training in 2001, Nash was sent to Princeton of the Appalachian State League to start the year. 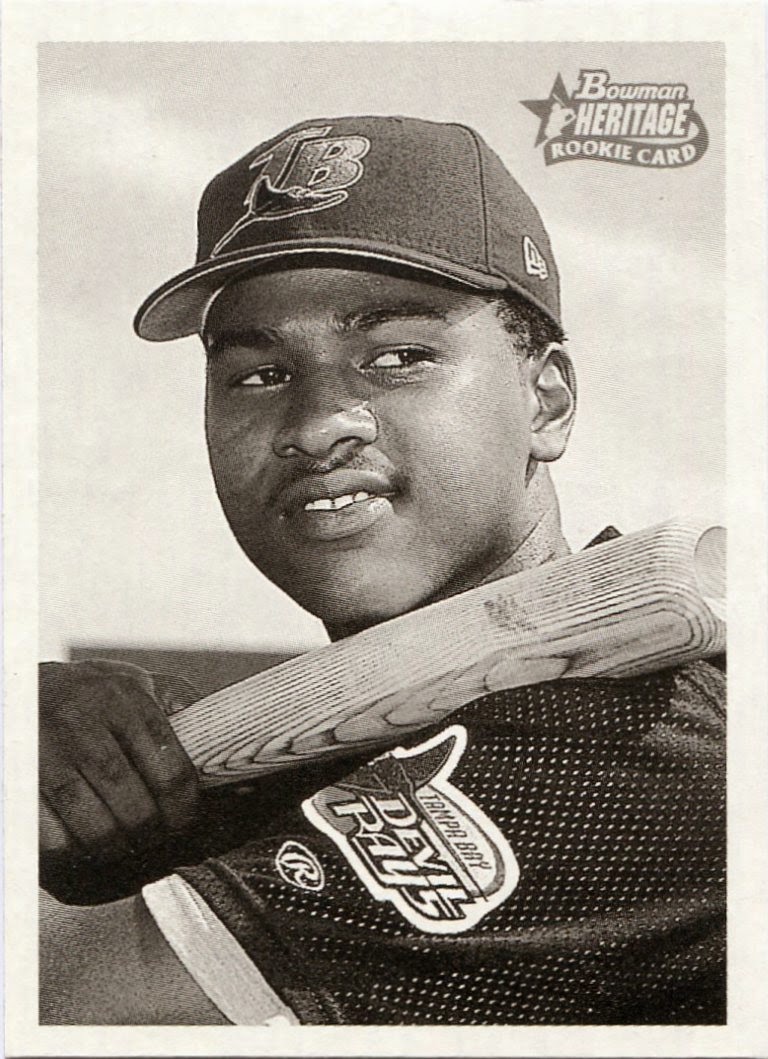 It would turn out to be the only season "Toe" Nash would spend in professional baseball.

The numbers he put up were fair for someone who was playing in the cane fields just a few months earlier. Nash hit .240 with eight homers and 29 RBIs in 47 games that year.

Sadly, he ran into legal troubles in the offseason and was consequently released by the Devil Rays in September of 2002. The Reds signed Nash soon after, but voided his contract before he played in a single game after further run-ins with the law.

In 2005, after being out of baseball for four years, Nash was convicted of drug use and sent to prison for ten years.

He was released in November of 2013, his days of baseball well behind him. 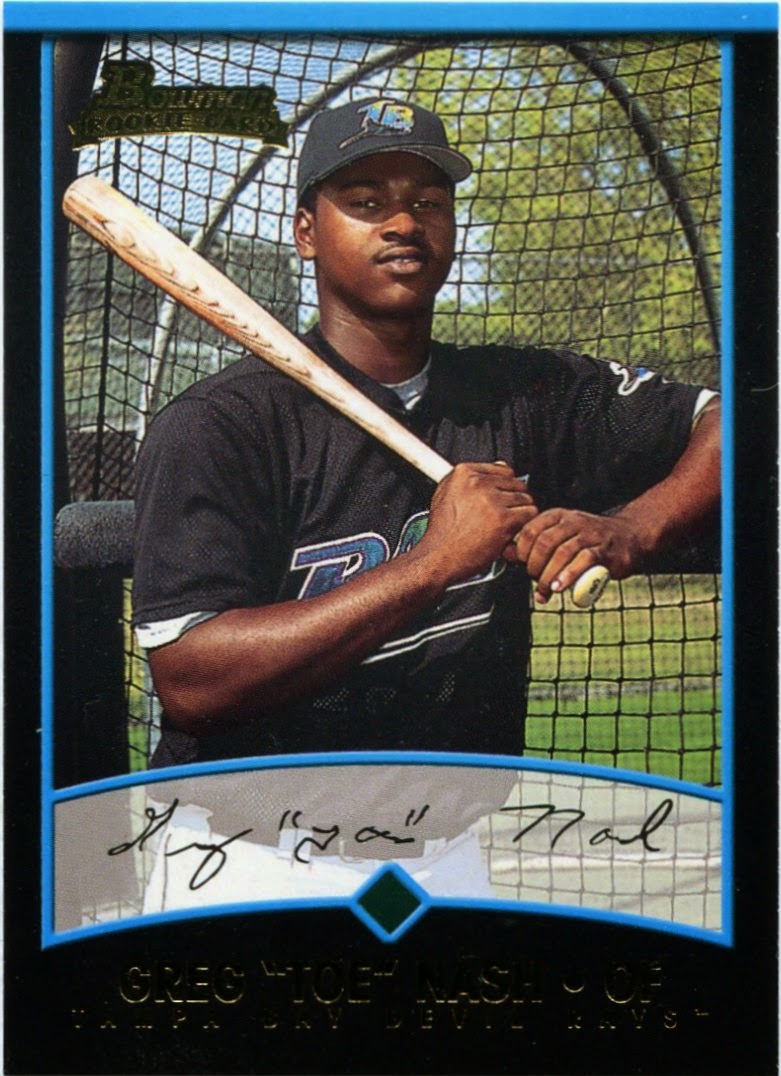 The story of Greg "Toe" Nash is a classic example of What Could Have Been.

Who knows what he could've done with more seasoning in the minors? Perhaps we'd be talking about him in the same breath as Albert Pujols and Adrian Gonzalez today. We'll never know for sure.

Sadly, Nash is little more than a footnote here in 2014. I picked up the quartet of cards featured in this post off of Sportlots for a song. It's the start of what I hope is a fun and fruitful player collection quest of a man whose story seems like something out of a fantasy world.

I actually had the 2001 Bowman rookie you see above at one point as a kid. I vividly remember holding it in my hands, although I didn't know anything about Nash's story at the time. I simply thought it was funny that the guy could have the nickname "Toe".

It wound up in my spares box after a while, eventually traded away for cards that I've long since forgotten. It wasn't a spectacular ending.

Now that I've discovered the tale of "Toe" Nash, I'm glad to have reclaimed one of those lost baseball cards from my childhood.

I'll cherish it for a completely different reason now.
Posted by Nick at 5:54 PM

Somewhere around 2005 or 2006, I decided to pick up autos of a trio of once-huge prospects that had tanked. I snagged autos of Rick Ankiel and Josh Hamilton for $.99+shipping. I could never land a Toe Nash auto at a price I was willing to pay.

Great post! I'll have to keep an eye out for any Toes.

Another Louisiana guy for me to look out for...

What town is he was from? Lots of cane fields just a few miles away from me.

The article says Nash was from Gonzales, Louisiana.

I have a 2001 Princeton devil rays team photo with Nash and sighted by jonny gomes for sale if interested.Selling other Johnny Gomes items 2