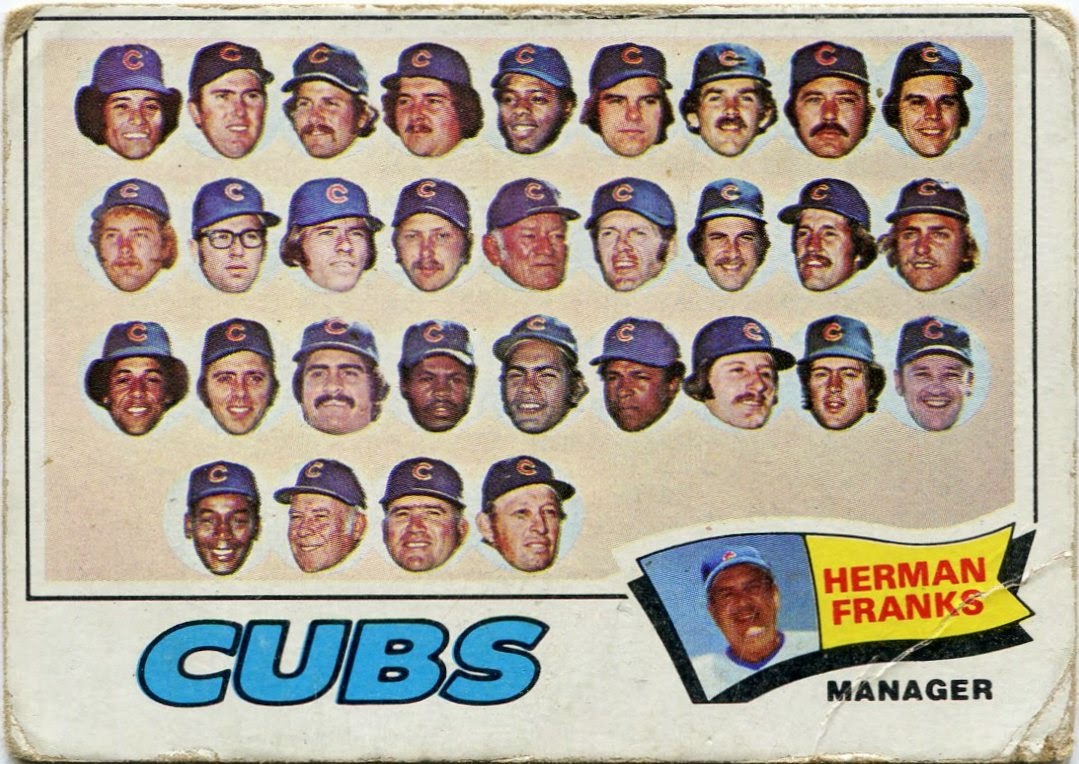 I've pretty much given up trying to post twice a day.

It's something I did consistently during the early days of this blog. How I had the time and material to do so, I'll never know.

Up until now, I've divided these "Short Term Stops" posts into two separate afternoon and evening write-ups. From this point forward, however, I'll be changing the format. Rather than chopping them in half, you'll get each team's roster in one big chunk.

I'll try to post these "Short Term Stops" more often from now on as well. The last one I did was three months ago. That's way too big of a gap for perhaps my personal favorite theme on this blog.

This is actually the "Short Term Stops" post I've been waiting to write all along. The one devoted to my beloved Cubbies.

The Cubs were iconoclasts in the '70s, the only team to not submit to a team picture for Topps. They used floating heads instead. Oddly enough, they make for more interesting pieces than most of the other team cards issued in the '70s.

This is an especially diverse roster of "Short Term Stops" nominees, and I'm excited to bring it to you tonight. 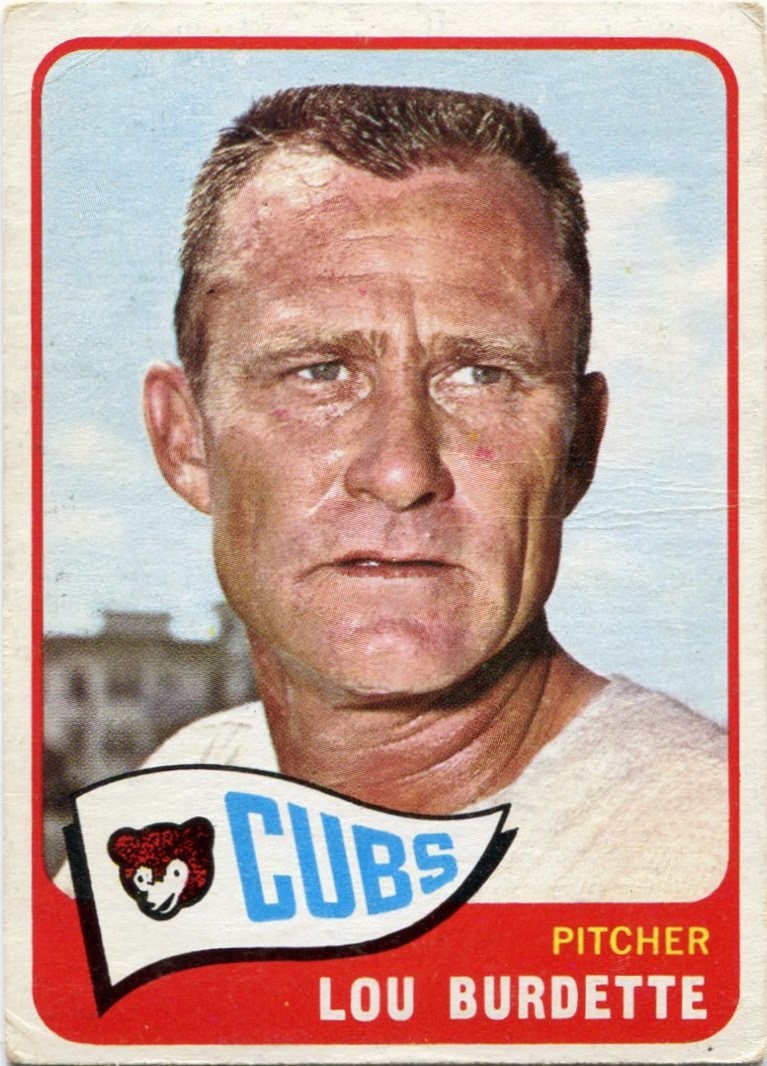 The Cubs actually don't have a strong pitching staff on their "Short Term Stops" roster.

I struggled to find a trio of hurlers for this post. Though he pitched for part of two seasons with the North Siders, I deemed Lew Burdette's time in Chicago to be unfamiliar enough to make the roster.

Though his name is spelled "Lew" (short for "Lewis"), Topps mistakenly put "Lou" on almost all of Burdette's cards. This particular one is actually pretty special to me for a fairly odd reason.

I love Burdette's 1965 Topps issue, as it's the only card I own of him as a Cub. I found it in a dollar box at a show a while back. The card I bought it with, however, easily eclipsed Mr. Burdette.

In one of my pricer purchases, I dropped nine bucks on a '69 Topps Roberto Clemente. I only dug through that dollar box to bring my total up to an even ten.

He's no Clemente, but Lew Burdette made a great purchase even greater. 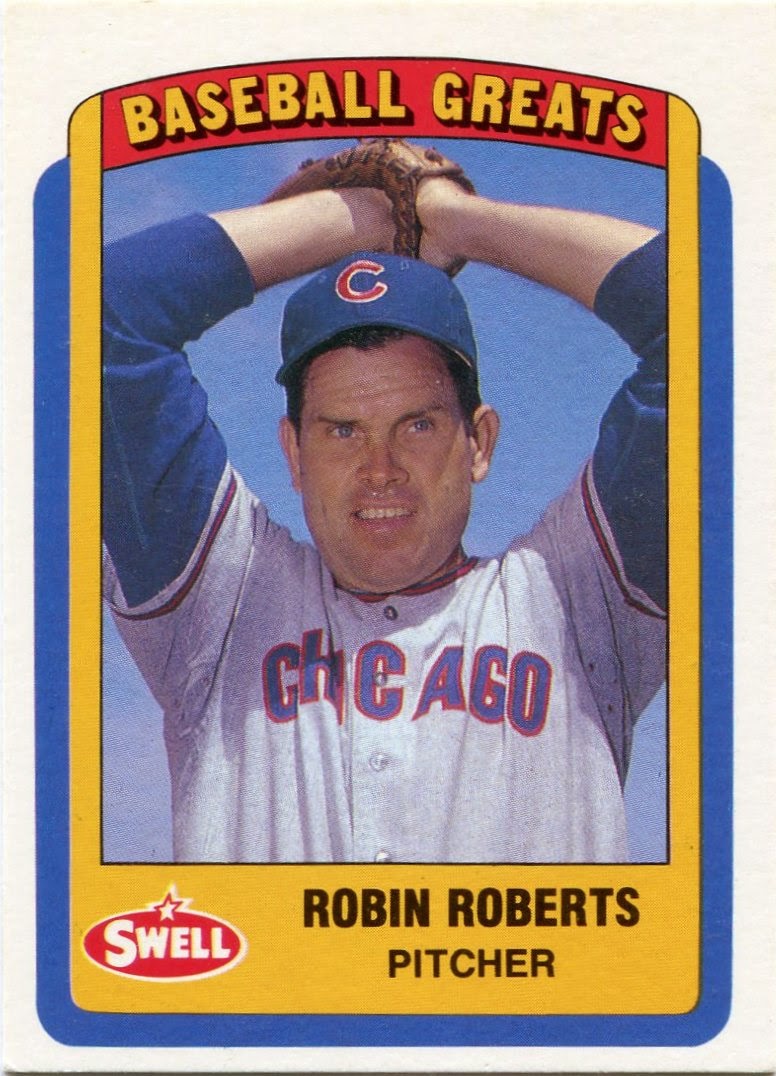 Robin Roberts is far and away my favorite member of this "Short Term Stops" pitching staff.

The future Hall of Famer's career went out with a whimper in 1966, as he split the season between the Astros and Cubs. He posted a bloated 6.14 ERA in 11 games with Chicago before calling it quits.

This is the only card I've seen that features Roberts as a Cub. I didn't even know it existed until I randomly found my copy in a discount bin at my LCS.

Though they may be my favorite team, the sight of Roberts in a Cubs uniform has never looked right to me. 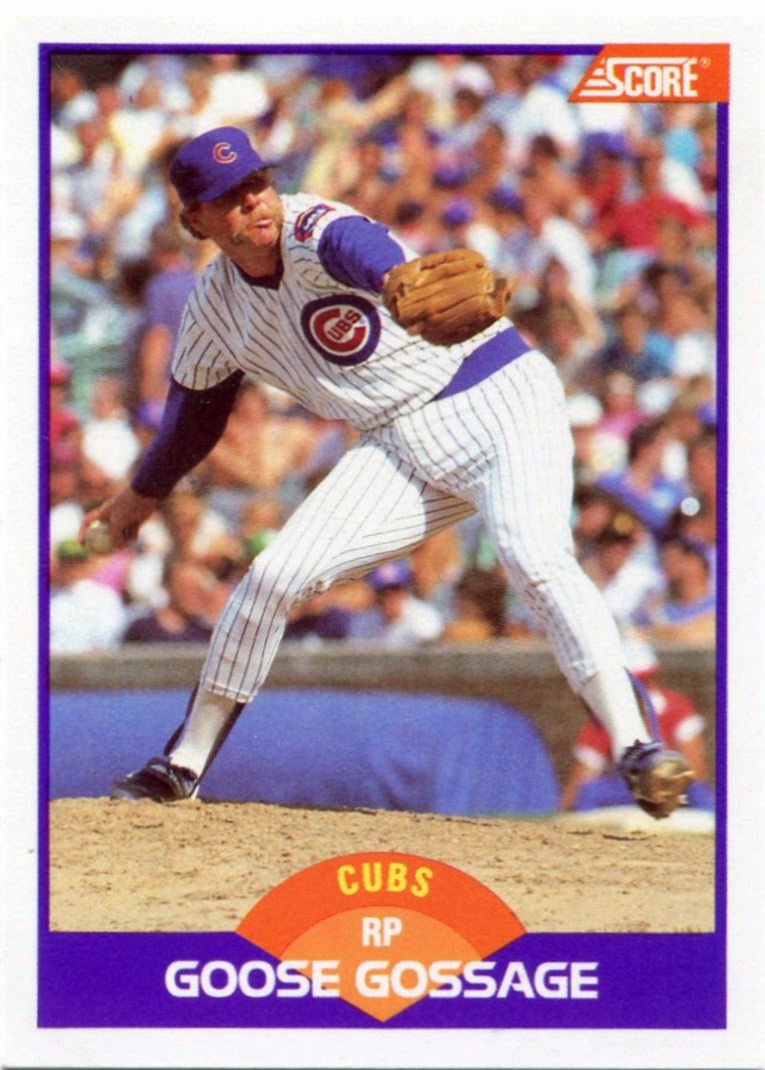 Though he's probably best remembered for his memorable stints with the Yankees and Padres, Goose Gossage became a well-traveled ballplayer during his waning years.

He played for seven different teams during his final seven seasons in the bigs. His lone year in Chicago was fairly pedestrian, posting a 4.33 ERA and 13 saves in 46 games with the Cubs.

He'd go on to play for the Giants, Yankees (for a second time), Rangers, A's, and Mariners after that.

Even the best players become expendable at some point. 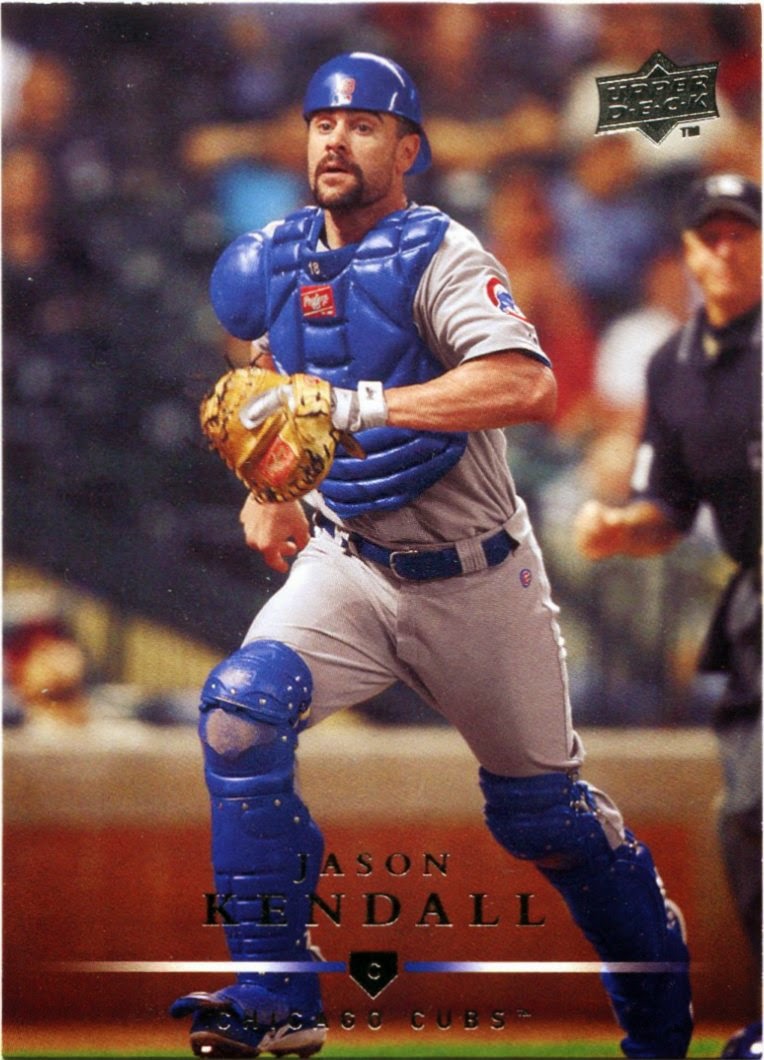 I distinctly remember my excitement when I heard that the Cubs had traded for Jason Kendall in 2007.

Because of his hard-nosed, no-batting-gloves way of playing the game, Kendall had always been one of my favorite catchers. I became an even bigger fan of his when he came to Chicago.

I don't recall much from actually watching him play with the Cubs. Given his solid .270 average in 57 games on the North Side, however, perhaps I should.

I went head over heels for the first cards of Kendall as a Cub more than anything.

They're still some of my favorite "Short Term Stops" issues around. 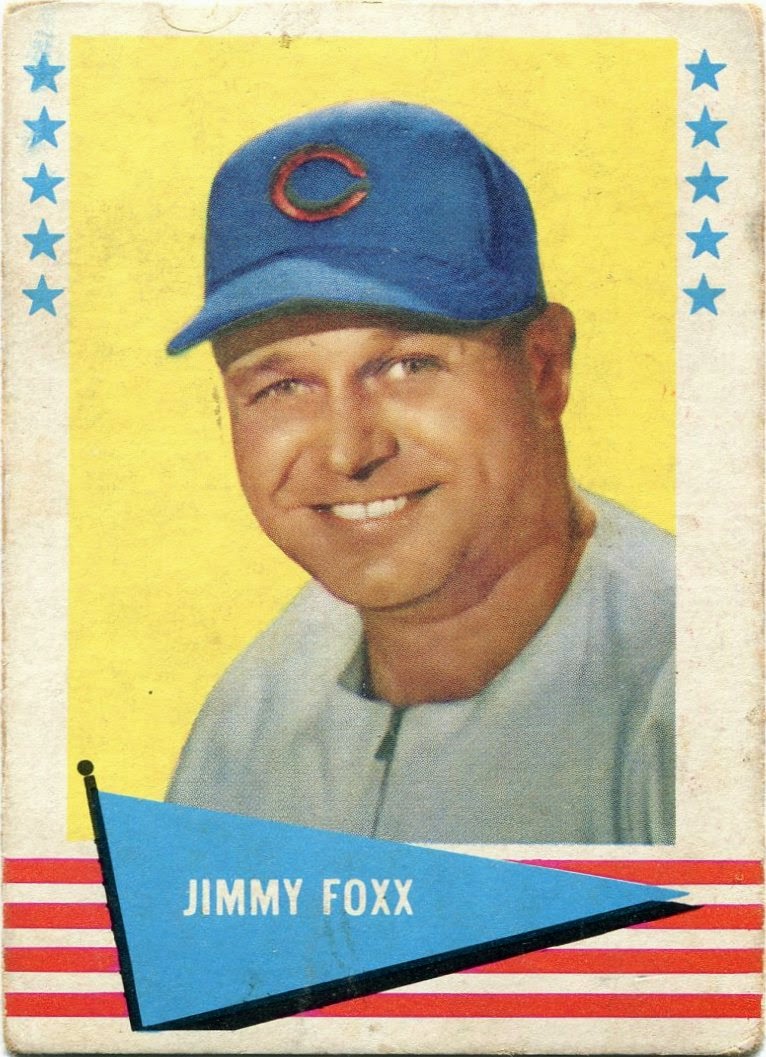 Though Fleer may have misspelled his first name here, Jimmie Foxx had one of the most dominating careers in baseball history.

However, like a lot of his counterparts, his career didn't go out with a bang. He split the 1942 season between the Red Sox and Cubs. He took 1943 off to work for an oil company, then returned to the Cubs for 15 games in 1944. He finished off his career as a Phillie in 1945.

Just three of Foxx's 534 career dingers came during his stint in Chicago.

Frankly, I'm surprised he has any cards as a Cub. 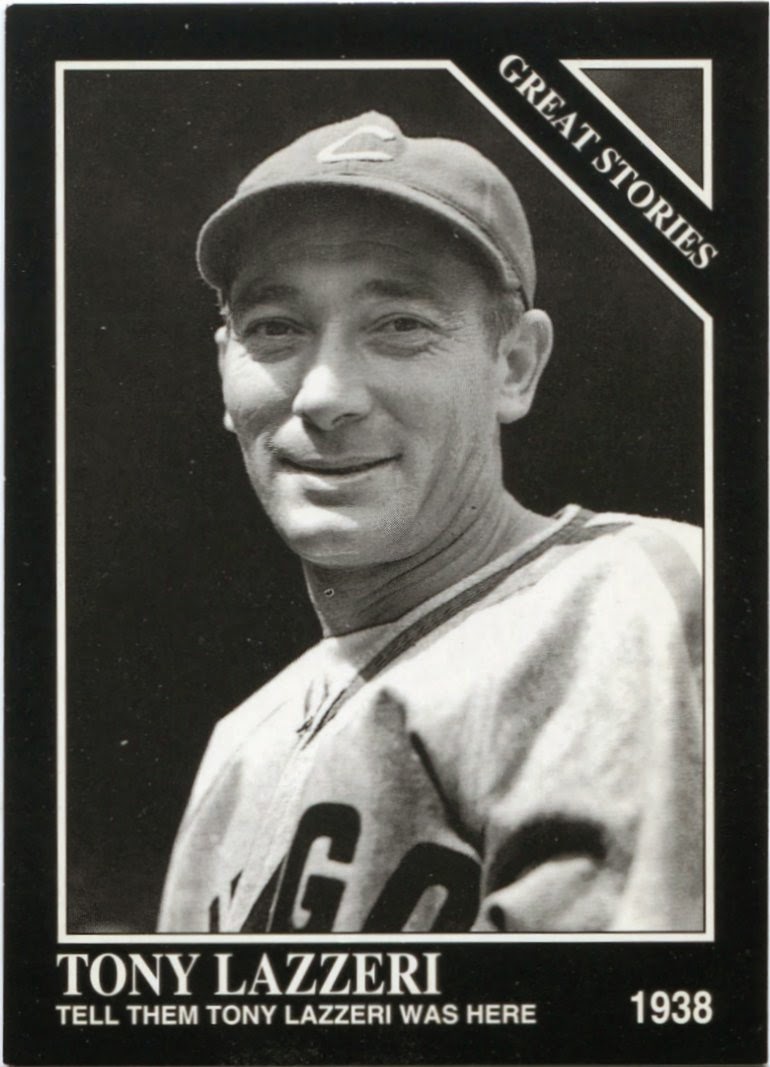 The Cubs have an annoying tendency of hoarding washed up stars who are well past their prime.

You can add Tony Lazzeri to that list. He hit .267 in just 54 games with the '38 Cubbies. The man they called "Poosh 'Em Up" finished his career with the Dodgers and Giants in 1939.

This is actually the only non-Yankee card of Lazzeri I own.

Just another reason to love the Conlon brand. 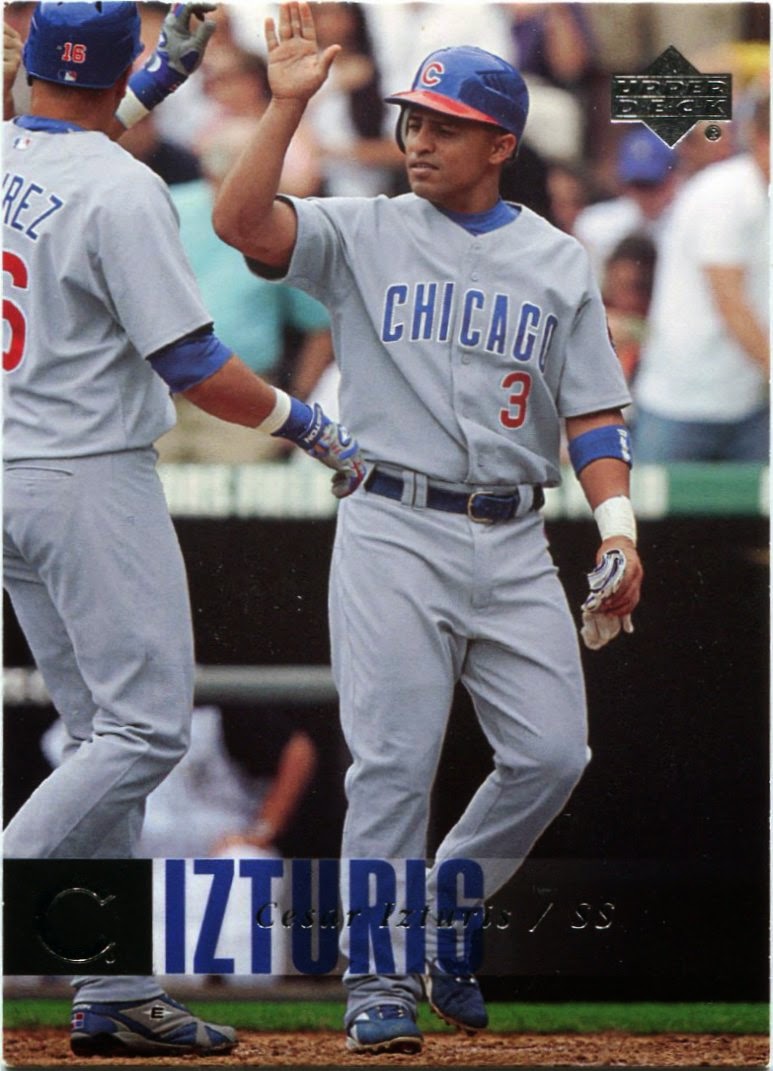 I have absolutely no recollection of Cesar Izturis as a Cub.

Honestly, I didn't have anyone better for the shortstop position on this roster.

Izturis gets the nod by default. 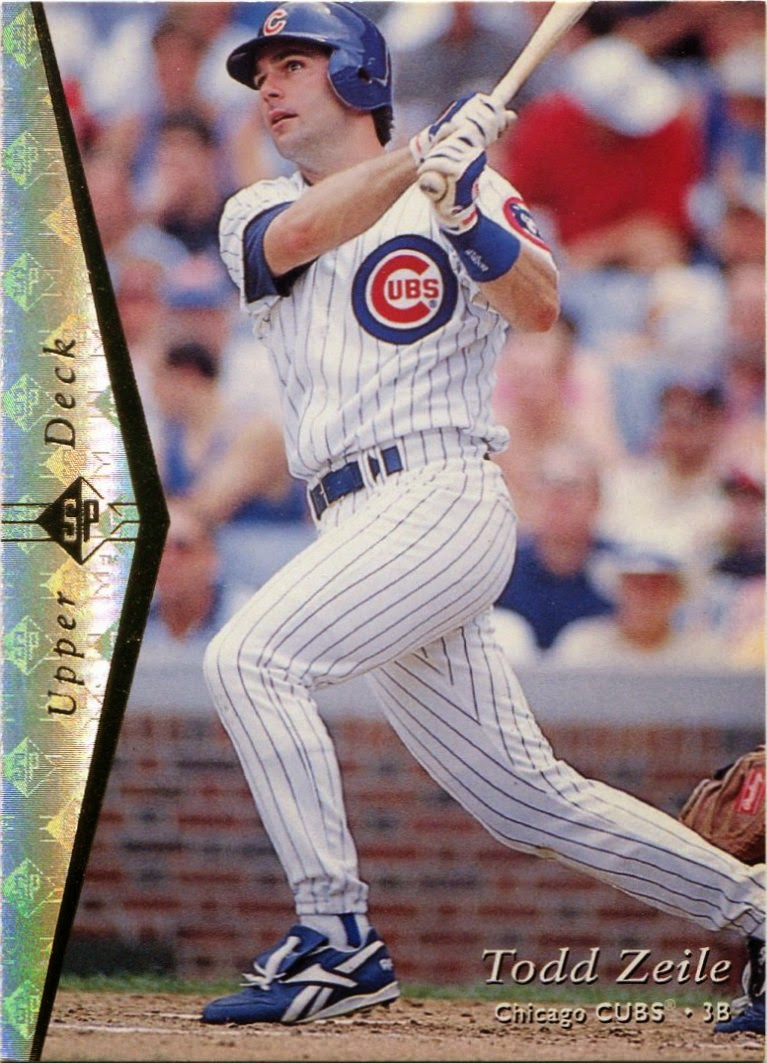 On June 16th, 1995, the Cubs landed Todd Zeile from the Cardinals for Mike Morgan and two minor leaguers.

Little did they know the chain reaction it would set off afterwards. Zeile would become one of the most well-traveled players in history after that first trade.

After his 79 games with the Cubs, he'd go on to play for the (deep breath) Phillies, Orioles, Dodgers, Marlins, Rangers, Mets, Rockies, Yankees, Expos, and Mets again.

I'd bet Todd Zeile was the type of guy who always had a suitcase packed. 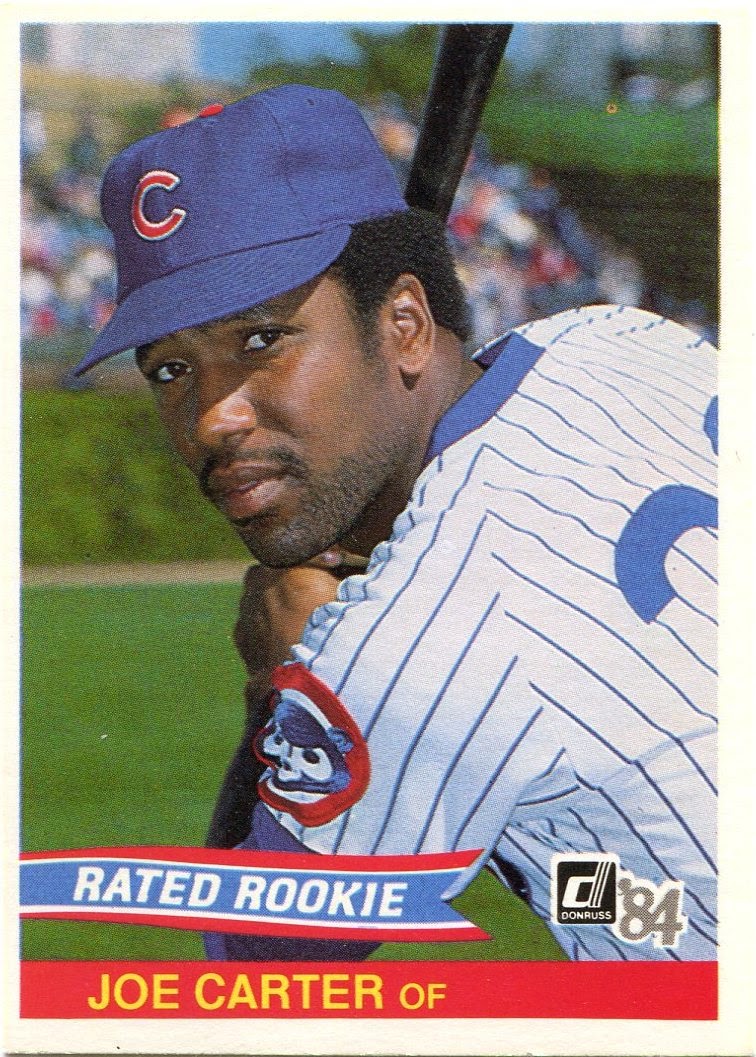 This is undoubtedly one of the best "Short Term Stops" nominees ever.

For years, I assumed there weren't any cards of Joe Carter as a Cub. His '84 Donruss rookie somehow slipped past me until I found it in a dollar box at a show about five years ago. It quickly became one of my favorite cards and ranked in my "Modern Top 100" countdown on this blog.

Of course, Joe Carter is best remembered for his World Series-winning homer against Mitch Williams and the Phillies in 1993. What a lot of people might not know is that he started as a Cub ten years prior.

If his .176 average is any indication, his lone season in Chicago was forgettable.

His only card as a Cub, however, was anything but. 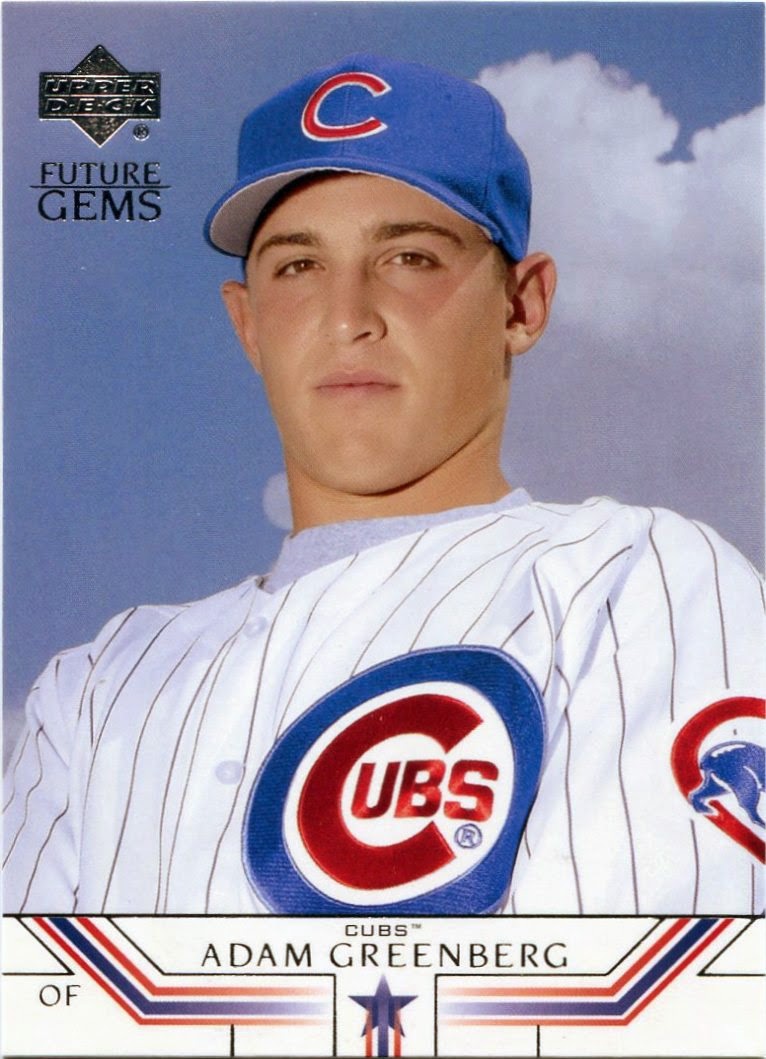 In his very first plate appearance in the bigs, Greenberg was hit in the helmet by a 92-MPH fastball. He had to be helped off the field, never to return as a Cub. It was a disturbing event which I unfortunately saw live.

After years of kicking around the minors, a strong petition to give Greenberg one more at-bat as a big leaguer found success. The Marlins signed him to a one-day contract, and he made a pinch-hit appearance on October 2nd, 2012.

Although he struck out on three pitches, seeing that at-bat was easily among the proudest moments I've ever experienced as a baseball fan.

Not to mention that it resulted in one of the more memorable cards in my collection. 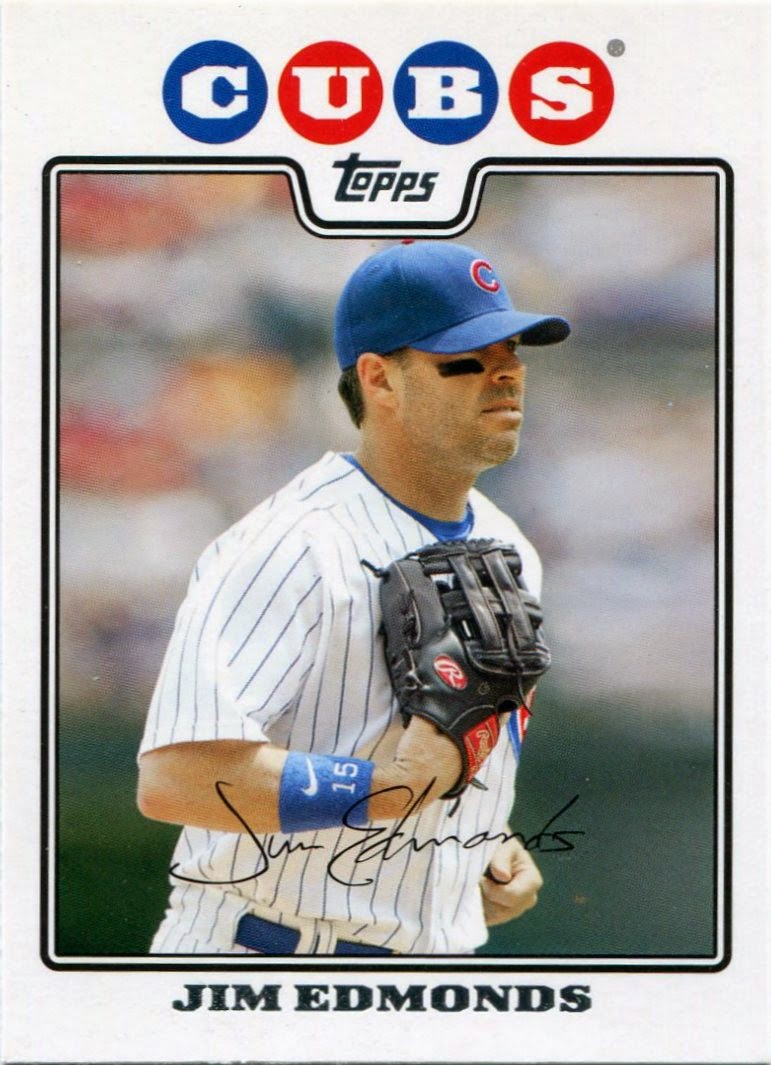 It's hard to describe how strange it was to see Jim Edmonds as a Cub for the first time.

After so many years with the rival Cardinals, I can't say I was on board with Edmonds coming to Chicago at first.

It sure didn't take long for me to warm up to the idea. He hit 19 homers in 85 games with the 2008 Cubbies, playing a big role in the team's playoff run that year.

In some ways, I remember Edmonds better as a Cub than a Cardinal.

Our fandom is biased that way sometimes.

That just about does it for this edition of "Short Term Stops". I hope all of you like the new format.

Fittingly, your Cubbies make for one of the more interesting STS teams. Can't beat that outfield for great stories and great cards.

Wow. I thought Edmonds was with the club much longer than he really was. Great post.

The Izturis is a Coors Field card! I'll have to add that one to my wish list.