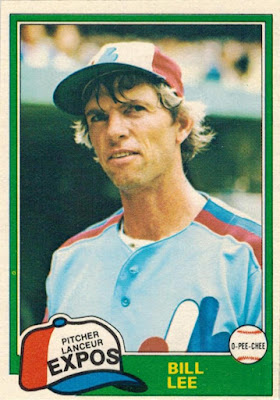 Okay, truth is I've never been to Canada, though I've long wanted to visit our friends up north (at times I've even entertained the thought of moving there). The border isn't terribly far from where I live -- maybe a five-hour drive -- but there's something about Canada that has always seemed somewhat exotic to me, way more different than two countries so close in proximity should be.

Nothing symbolizes my Canadian fancy better than my lifelong fascination with O-Pee-Chee baseball cards. To the unbiased eye, there's not much of a reason to go nuts over these -- by and large, they're almost exact replicas of Topps cards with minor changes. But don't say that to a card collector, or at least not me, because I'll tell you again and again: OPC RULES! As an American, I'll always get a wild joy out of owning cards that were printed in Canada, issued there, and have French on the front(!). There's so many reasons to love these sometimes offbeat and always excellent pieces of baseball history.

And as a tribute to our northern neighbors on this fine Canada Day, I've assembled the best of the best from OPCs long history into the First Annual OPC Award Show. 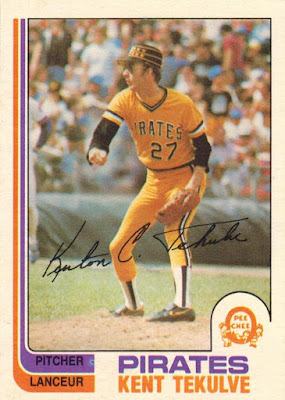 I never took French in school -- it was never offered -- and so about 98 percent of my limited French vocabulary has come from OPC baseball cards.

My favorite of the many baseball terms I've picked up from OPC has to be lanceur, the French word for "pitcher" -- it makes me think of a swordsman ready to do battle, which, in some weird way, is fitting for a pitcher. 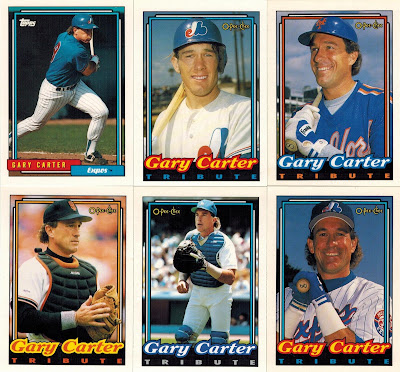 For the most part, OPC has been little more than a direct reprint set for Canadians, featuring French text alongside the same players and pictures we see here in American Topps.

Sometimes, though, OPC has strayed from the herd and made their own "lost" Topps cards, and this is where I think OPC is at its best. There's been a handful of examples of this over the years (some of which we'll see in a bit) but my favorite OPC concept has to be the special five-card Gary Carter tribute set in '92. Carter is featured in '92 Topps and Topps Traded, but the tributes are exclusive to the OPC checklist and devote a card to each of the five stops he made in his long career (including both of his stints with the Expos!).

Gary Carter's one of my all-time favorite ballplayers, and this is the tribute he deserved. 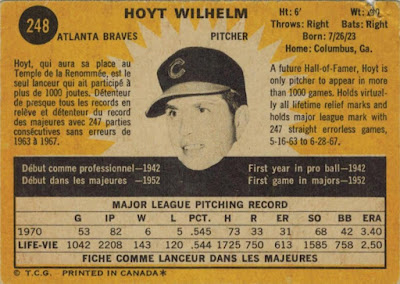 This isn't just the best OPC card back -- it's one of the best card backs EVER, dammit. 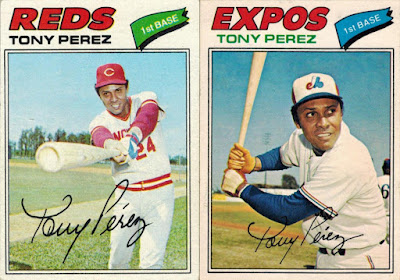 There's one reason and one reason only I consider 1977 to be my favorite OPC set: the "alternate universe" cards.

These are pretty much exclusive to '77 OPC -- I cant think of any other vintage OPCs that feature completely different teams and/or photos than their Topps companions. The '77 OPC substitutes -- like this Tony Perez -- mostly consist of new and/or updated cards for the Expos and (expansion) Blue Jays, but there's a few other stray changes in the checklist (notably, Bobby Grich).

In the weird, wide world of "alternate universe" cards, these are easily the kings. 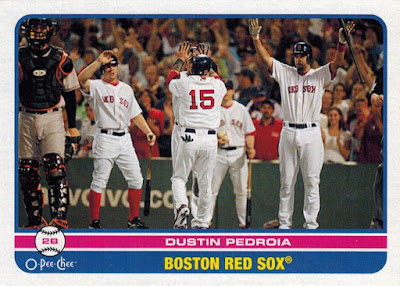 OPC has had a few modern offshoots since their vintage days -- the OPC Premier sets of the early '90s come to mind -- but my favorite is by far the one-and-done 2009 Upper Deck OPC brand.

I loved these when they came out, and I still love 'em now (I'd once again like to note that I see a lot of 2020 Big League here). I think I read somewhere that Upper Deck acquired the OPC trademark at some point, which would explain why this set exists under the UD umbrella, but unfortunately this fantastic set came about right at the demise of UD's baseball years. Everything I love about baseball cards is right here in 2009 OPC: low-end, terrific design, great photography. Just a brilliant effort overall.

I'm still sad we never got to see more of it. 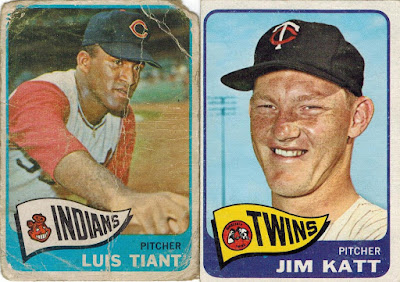 A brief internet search this morning showed me that OPC was printing baseball cards as far back as 1934, but since I don't have a chance in hell of ever owning one of those, my oldest OPCs will have to be this pair of '65s.

The Katt (sic) was a Christmas gift from Dad many years ago, and Brian was generous enough to pass the Tiant along to me during a blogger meetup at the National a while ago. 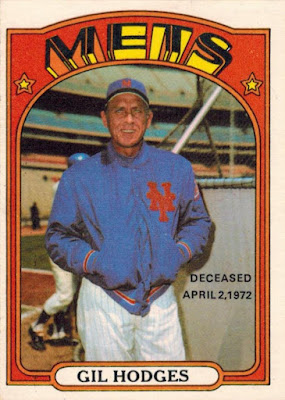 I, admittedly, have a morbid love for this card -- I picked it up surprisingly cheap (three dollars!) at a card show recently.

Best I can tell, OPC cards went to print a short while after their Topps counterparts, and in at least one unfortunate case, that presented the dilemma of how to document a death -- notably with the "deceased" designation on the '72 OPC of Gil Hodges, who suddenly passed in April of that year. 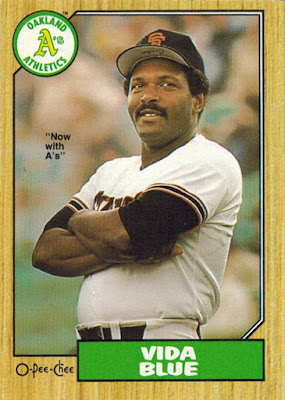 OPC has a long history of updating the cards of their Topps counterparts -- with the exceptions of the '77 alternates, they're usually documented with a logo update alongside a "Traded To" or "Now With" note in small text atop the original photos.

In this case, however, OPC updated something that never actually wound up happening, which probably led to some confusion. This is the same photo that appears on Vida Blue's 1987 Topps card, only he's labeled as "Now With A's" and fitted with the appropriate logo/color changes. But Vida Blue never played for the A's a second time -- he signed with them in January of '87 but retired a month later.

Thus began this card's wild foray into the bizarro world of baseball cards. 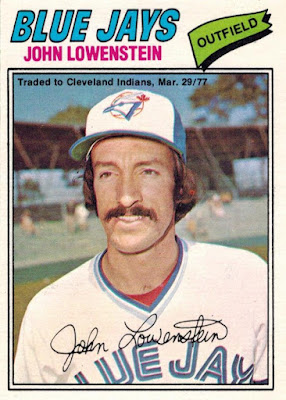 Why is this my favorite OPC card?

Let me count the ways...first off, it earns points for just being an OPC, of course. Second, it's one of those precious alternate-universe cards from '77 OPC. Third, and most importantly, it's a zero-year card, but unlike the aforementioned Vida Blue, it doesn't just note the change that never ended up happening -- it actually shows Lowenstein in full Blue Jays garb.

What's even weirder is that, on a stats sheet, it doesn't even look like John Lowenstein switched teams in 1977 -- he went from Cleveland to Toronto to Cleveland again in the span of a few months before the '77 season started. But that didn't stop OPC from slipping out this card of him as a Blue Jay in the interim. It was something of a white whale of mine for a while before a cheap copy popped up on COMC last year. OPC itself will always be something of a novelty to me, and no better card shows its strange, electric beauty than this one.

Love OPC. Great job, some great cards too. I spent the day scanning and started posting my completed OPC sets on my OPC blog.

Thanks for taking up the mantle of a Canada card post on Canada Day. I try to do one every year but didn't this year because I'm running out of topics! Did an OPC post last Canada Day.

Another of my favorite alternate universe OPC cards is the 1981 Frank Tanana in which OPC informs you that Tanana is now with the White Sox. White Sox? What? Yeah, Tanana never played for the White Sox. Was never even sent there to my knowledge. I think the typist just confused Red Sox and White Sox.

Love the "best of" format of this post. Some great highlights.

Great stuff. I'm have to track down a copy of that Vida Blue.

You know I love me some opc! Thanks for linking to my blog, too. Sometimes I see posts about opc and wonder if people are aware of it.

Not a huge OPC guy but I do love the cards that update a player's team, especially when there's no Traded card around.

That John Lowenstein card is just awesome. Great post on the OPC cards by the way, really great read. Also, thanks for the 1970 OPC cards in the mail. I'll have a post up on those soon.

Another great post. I love OPC. Didn't appreciate them when I was younger, so now I'm making up for lost time.

Excellent post. As you pointed out, OPC 2009 is an interesting set. I remember how polarizing that set was for hardcore collectors. Many loved its throwback style, numerous posed shots and complete lack of foil. Others thought Upper Deck was being low down again, aping vintage Topps again, specifically 1976 Topps. It is odd that actually UD bought the O Pee Chee name, though. But all this makes card collecting so cool. Everyone has a different opinion on every set.

You pretty much covered all of my favorite OPC "moments", with the exception of the extra card Rusty Staub had in 1971, something which has become a bit of a white whale for me.

That Hodges card stunned me. I had no idea that OPC (or anyone) printed "deceased" on a card front. "In memoriam" would have been classier.

Man, great stuff here. I actually just bought some of those Carter tribute cards from baseballcardstore.ca. I'm a big Carter guy but haven't found any of those in the wild here in Mets country.

I've owned the 1977 OPC set for a long time, however. I don't remember whether I realized how much cool stuff was in that set, or I just saw a really good deal in the pages of Baseball Hobby News--maybe both! But it might be the best card purchase I've ever made.

That Vida Blue is fantastic--the green just jumps off! So weird because it's sort of a zero-year card, but then again the A's are the team he's most associated with.

My favorite French term is the outfielder counterpart "voltigeur" - which translates to tumbler/leaper/vaulter.

These are great cards. But no '70 OPCs? I think of you as the fountain of '70 OPC.
Incidentally I learned at least three things I didn't know just from these comments.

Moving to Canada?! 3 differences All start with M