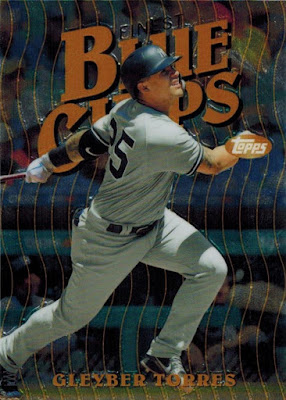 Thought I'd share some good news: as of next week, I'll have a job again!

My manager at the bookstore called me yesterday and asked if I wanted to come back to work this coming Monday. While I still think it's way too early for non-essential places to open back up, fact is the bookstore is open (complete with masks and proper sanitation, of course), and I kinda sorta need a job. This is also the first job I've had that I can actually say I like. So for that, it'll be good to be back -- even though I admit it's been nice to be generally slothful over the last couple months.

While my own personal apocalypse/quarantine may be winding down for now, there's a whole new one starting up again on the blogs, spawned by Tim over at the newly-christened "Cardpocalypse" blog (formerly "I Love the Smell of Cardboard in the Morning"). This year has felt like a bad dream for many reasons -- some of which have spilled over into the card world -- but despite the name, Tim's "Cardpocalypse" has been one of the better developments. He even held a series of contests to celebrate the return of his blog, and I was lucky enough to win this neat Gleyber Torres insert from Finest (a brand I've still never opened a pack of after all these years) in one of the giveaways.

It's a bit painful to collect Torres -- he was once a Cubs prospect, after all -- but I do, and thus I was thrilled to add this one to my binders. 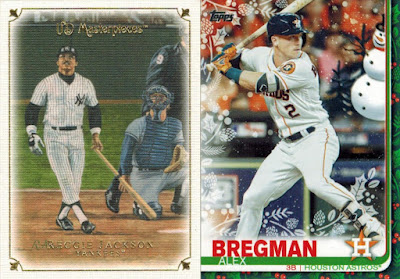 I thought that would be the extent of my contest winnings, but Tim had other things in mind -- I knew something was up when a huge yellow mailer ended up on my doorstep which obviously held more than one card.

Turns out Tim went to town on my wantlists, plugging a Dime Box Dozen need with the Reggie (I miss UD Masterpieces) and finding one of those goofy SPs from last year's Topps Holiday Bregman. 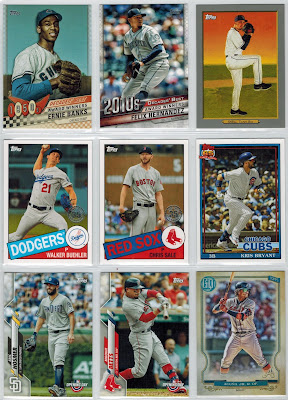 Tim also participated in a small massacre of my 2020 want lists. 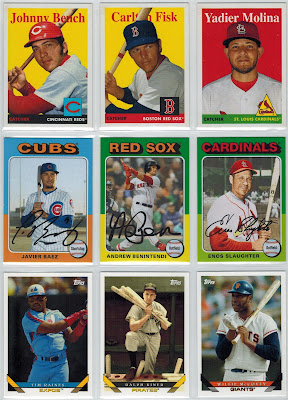 I get excited when people send me stuff off my 2019 Archives lists -- I still need quite a few of 'em because the collation was awful in the packs I bought at the time (a common tale these days). 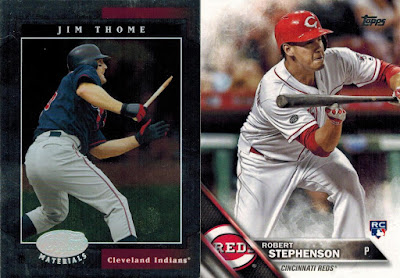 The Cardpocalypse also came in the form of a couple mini-collection hits here -- the Stephenson feeds my begrudging love for photo variations. 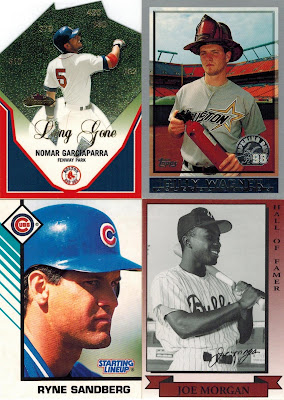 Some excellent randoms here, including Joe Morgan as a minor-leaguer, Billy Wagner as a (real) fireman, and the first card I've ever seen in the shape of an outfield wall. 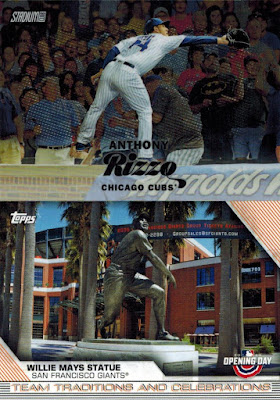 Here's a couple cool ones -- the base version of that Rizzo is actually vertical, but Topps switched the Chrome parallel to horizontal for whatever reason.

Me, I think it actually works better horizontally. 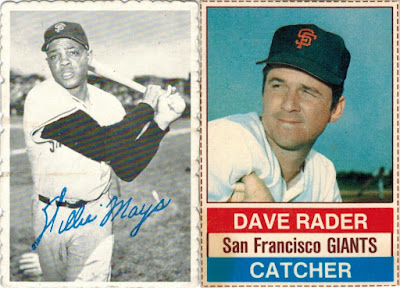 It still boggles my mind that people like Tim just give Deckle Egde and Hostess cards away for free, out of the goodness of their heart.

I had the Mays already, but this copy is a huge upgrade over the one I had (which I gave away in a Free Card Friday post), and I actually collect Dave Rader because I got him confused with his brother Doug once when I was younger, and I remember it taking a while to realize I'd been buying cards of the wrong guy. 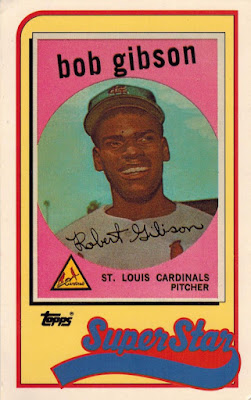 Closing out the Cardpocalypse was this fantastic Baseball Talk insert of big Bob Gibson.

These strange pieces of Overproduction Era excellence feature actual acetate records on the back -- which I believe contain spoken bios and highlights of the player on the front -- and one of these days I'll have to bring one over to Dad and see if they'll play on his turntable. If the dawn of the Cardpocalypse means things like these falling into my collection, then I welcome it with open arms.

Even though it might take me a while to adapt back into the working world, it's nice to know I have a job again in these strange times -- but for now I wish all of you safety and good tidings during this Cardpocalypse season.
Posted by Nick at 5:55 PM

Congrats on the return to work. Just keep your mask on and social distance and you'll be fine. I've kept the Target second job because they don't schedule me much, I have the option to wear gloves (which I do), and electronics isn't busy in the mornings.

Lots of neat cards here, especially the Reggie, Nomar, and Bryant '91. Glad to hear you'll be going back to work next week. Stay safe!

A bookstore job seems like a good one. I'd probably make annoying comments on customers' choices though.

Voting for the Reggie.

Congrats! Working retail in this era will give you some stories to tell.

Congrats on once again being gainfully employed! Stay safe out there. Thanks again for entering the contest, I’m glad you’re enjoying the spoils!

That Dave/Doug Rader story is amusing.

Glad you're re-employed. I've been working this whole covid time. It's not bad. Of course, I'm not dealing with the public like you will.

Be safe! People are crazy. Our numbers here are up 600% for June alone.Great package from Tim.

Good to hear you got your job back. Stay safe there. Looks like Tim sent you a good batch of stuff!

A. Glad you received the call to go back to work. Stay safe.

B. Sweet Sandberg SLU card. The Mays Deckle is cool too.

C. One of my favorite oddball issues from the 80's is the 1989 Topps Baseball Talk.

Nice Mays deckle edge. I'm trying to complete that set, and Mays is one of the few cards I have left. You can get it for under $5, so I'll probably get it sometime.

Tim sent a lot of great cards! I'm glad to see him back in the b'shere! Happy to hear you are head back the the HPB! I will forever miss them! Stay safe, be well. Be like your dad and tell customers to back the heck up, if necessary!