I just wasn't made for these times 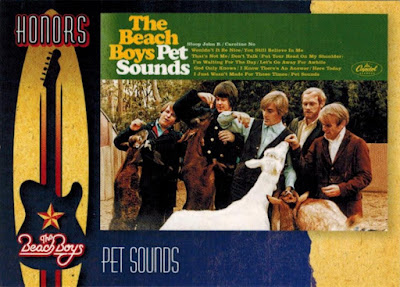 While I wouldn't classify my adolescence as lonely, there were definitely a few areas of my life that made me feel alone, separate from some larger movement passing me by.

First, and perhaps foremost, was my taste in music, and I worry I sound like every other typical in-the-know high school kid when I say that I disliked every bit of Top 40 stuff that dominated those years. Kids didn't listen to the Beatles because they were "too old," and when I told people I liked the Beach Boys, I got blank stares. A few of my classmates went so far as to describe them as "lame" or "boring" (exact quotes).

As I've gotten older, I've realized there are people my age who like good music out there -- working in bookstores has aligned with some cool folks over the years, and I've found I'm nowhere near as alone in my tastes as I once thought I was. I still love the Beach Boys, and Pet Sounds ranks as one of my all-time favorite albums, which made the recent decision to this card documenting the iconic album from Julie's "Pick Pockets" program quite easy.

Dad wrote a guest post on this set a while ago, but somehow this is the first card I've acquired from it for my own archives. 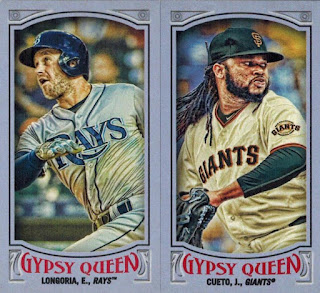 The other obvious source of adolescent loneliness that comes to mind is my fondness for collecting baseball cards.

I've mentioned this before, but the last time I had a friend who collected cards was when I was a freshman in high school, almost 15 years ago now. In terms of my social life, I've been pretty much on my own since then. Dad's always been there for me, and I of course have this wonderful blogging community, but a part of me really wishes I still had a friend to collect with. I can remember opening packs from Target with that friend in high school, and those memories are happy, but still a long way off.

But even if a collecting friend is a pipe dream, the blogosphere is a pretty darn good substitute -- because there's people like Julie who just give away minis for absolutely nothing. 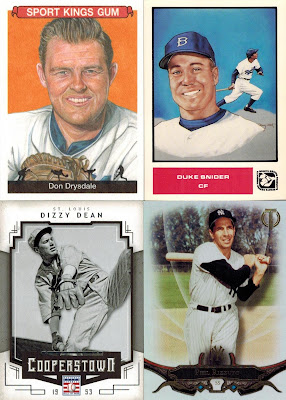 Couldn't help but pick these awesome legends from Julie's pocket. 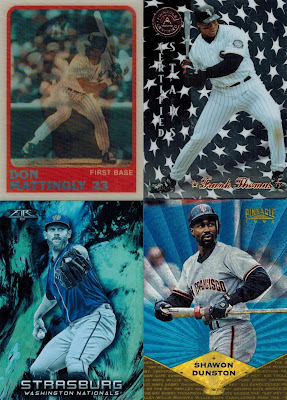 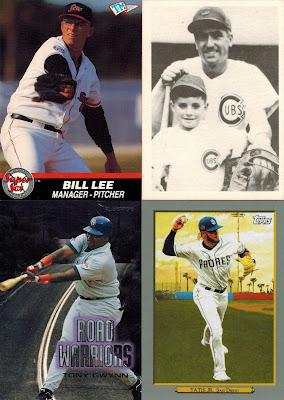 One has to wonder why Julie's leaving such good stuff in her pocket, waiting to be picked -- I'd be guarding stuff like this with my life!

I actually claimed that Cubs card without even knowing who that player is or what set it's from -- turns out it's an excellent TCMA War Years card of one-time Cub Len Merullo, and might possibly feature his oldest son "Boots," a kid cursed with that nickname because his father made four errors in an inning on the day he was born. 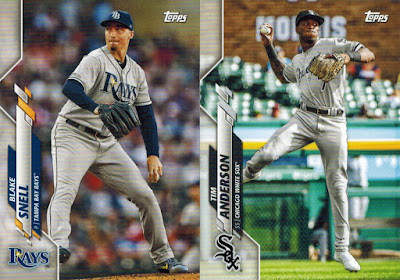 In addition to Julie's "Pick Pockets," I've also been lucky enough to receive a few different PWEs from Jim (aka gcrl) of the "cards as i see them" blog during the quarantine months.

These two are from this year's AL All-Star set, and they actually feature different photos than the ones featured on Snell's & Anderson's standard 2020 Flagship base cards, which kudos for Topps for (finally) doing that. 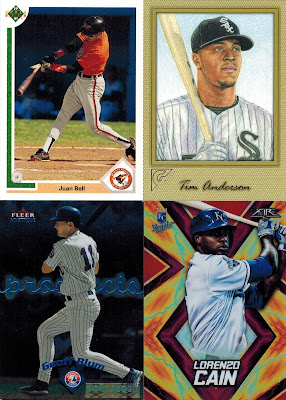 I love when offhand comments I make on this blog wind up with cards being sent to me.

I forget when I said it, but at some point I mentioned I collect Geoff Blum (a 15-minutes-of-fame Chicago sports legend!), and not long after that I found a new Blum waiting for me (along with a bunch of other needs) in an envelope from Jim. 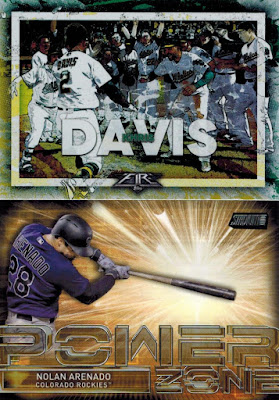 Further evidence for my suspicion that inserts get louder and louder with each passing year. 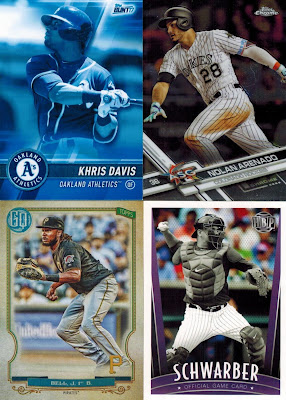 More random needs that Jim seems adept at finding for me -- I'm already starting to forget that Kyle Schwarber came up as a catcher. 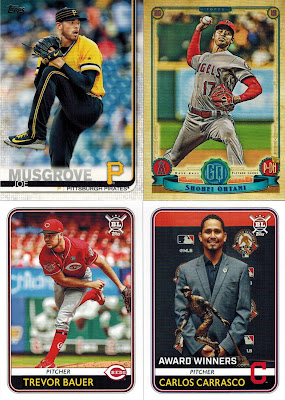 A few randoms from my want lists here, including a Joe Musgrove throwback from 2019 Flagship that somehow flew under my radar all of last year. 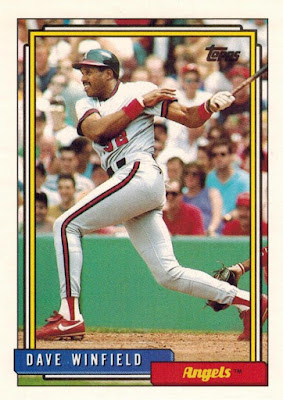 Not sure how I didn't already own this obscenely common '92 Topps Winfield, but I'm forever indebted to Jim for knocking it off my Dime Box Dozen list.

It's been a joy connecting with people like Julie and Jim around the blogs who collect baseball cards every bit as rabidly as I do, and understand all the little joys and tiny victories that come with a life in the hobby. Hobbies, like music, are at their best when shared, and I get a chance to do that every day around here.

And so for now, I know I'm not the only one who likes the Beach Boys, and better yet, I know I'm far from the only person out there who collects these weird pieces of cardboard.

"I Just Wasn't Made For These Times" is just a ridiculously great song.

Pet Sounds was one of the first CDs I ever bought. When I made my first CD purchase, I went right for the Beatles, Beach Boys and Sam Cooke.

I know I'm a poor substitute for a peer who shares your interests,but I do my best!

And sorry for the apple not falling far from the tree about feeling out of step among peer groups...as I've told you,I got in a fistfight in high school because some clown had the audacity to say "Buddy Holly sucks" haha!

Wish all of us in the blogosphere all lived in the same neighborhood and could attend baseball games together. How's that for a pipe dream?

My musical tastes in high school were way off the norm, too. I have a pretty vivid memory of one girl, Haley, coming over to my desk, opening the lid of my CD player, and loudly remarking "CLAPton!?"

I also remember a friend who had the Dr. Dre album 2001 and we quite enjoyed playing the (infringed, I just learned) THX "Deep Note" sound at the beginning.

Nice cards, by the way!

No joke, Nick, I actually coach HS baseball with Lenny "Boots" Merullo, who very much wears the nickname as a proud tribute. He is a great person and the kids love him. I had never seen that card before, so I will have to search out a copy or two online. Jeremy from the Topps Cards blog made up some customs of Lenny's son, former major leaguer Matt Merullo, that Lenny thought were terrific. Thanks for helping bring this previously-unknown card to my attention via this post!

I've been trapped within the Top 40 my entire life. You can blame the radio and MTV for that. These days I mostly listen to that same music from my childhood or music my students suggest which is usually Top 40 stuff they hear on the radio or Spotify.

You're really lucky to have a father who collects. I have a buddy who collects cards, but it's not like we sit around and bust open boxes... especially since we're doing the social distancing thing and I haven't seen him in months.

Wish all of us in the blogosphere all lived in the same neighborhood and could attend baseball games together. How's that for a pipe dream?


Or be able to trade cards in person! Heck yeah.

Being an enormous Queen fan forever, I also really like other artists such as The Beach Boys, The Beatles, The Kinks, The Who and others for the same reason I love Queen: their songwriting prowess. They all really knew how to craft a song AND perform it. This almost seems like a lost art these days with sampling, hiring outside songwriters and even theft. Heck, I even think ABBA were great artists because of their pop songwriting ability. Rock on, Mr. Dime Boxes.