The return of Repack Wars 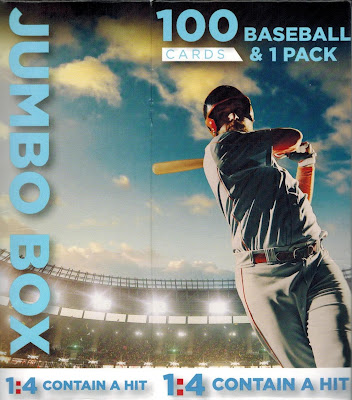 I have a habit (addiction?) of needing a soda to get through the work day, so while I was on break one afternoon last week, I went to the Walgreens across the street from my job for a quick Diet Coke.

I left with a Diet Coke and two repacks of baseball cards, because as I was on my way to the checkout line I remembered that Walgreens, of all places, sometimes has cards. As fate would have it, there were a pair of these 100-card repacks left in the toy aisle, and I bought them both. For better or worse, they're the first repacks I've bought in a long time. They no longer have the little window that lets you see the first card in the pack -- I've bought many of these based on that visible card alone -- but I still figured they'd be good for a cheap, fun rip.

Repacks were once all the rage on this blog, and it seemed like I used to buy (and post) about them weekly. Not so much lately. They're kind of like candy -- good for a little fun once in a while, but not the most pleasurable in bulk. You can only flip through so many '88 Topps commons, so it's no surprise that I eventually got burnt out of 'em. But the two repacks I bought the other day reminded me why I once loved these so much -- they obviously scratch the pack-opening itch I so often get, but on top of that, there's something satisfying about seeing a group of 100 different cards selected at random, no rhyme or reason between them.

For old time's sake, I decided to revive my old game of Repack Wars -- for your viewing pleasure, I've pulled a few of the more interesting cards from each pack, shuffled them up, and pitted them against one another to see which of the two repacks was the better stack. 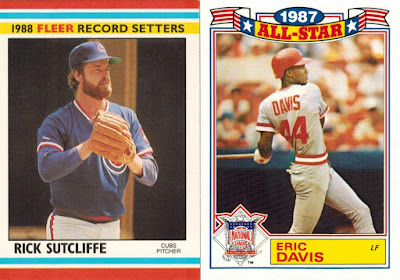 A matchup of '80s stars leads things off here, but this one's a landslide -- gotta go with the nifty Sutcliffe from one of the seemingly infinite amount of those Fleer oddball sets. 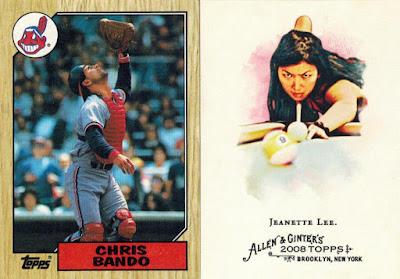 Part of the beauty of repacks is that you never know what they'll have -- everything from a cool '87 Topps common you've never seen before to a non-sport A&G oddity might be in there. 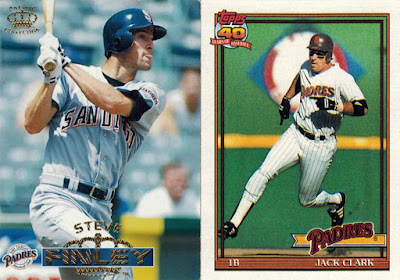 Always love seeing Pacific pop up in unexpected places, but I'm astounded that I've never seen that Jack Clark before, and he gets the point because I love everything about '91 Topps. 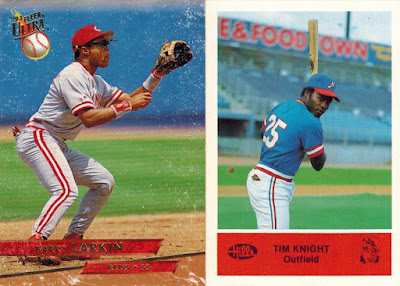 I think you know the answer. 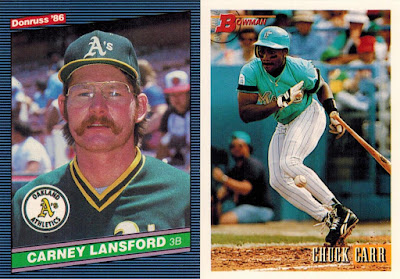 The '80s produced an inordinate amount of dudes who look like my 4th-grade Social Studies teacher -- point Lansford. 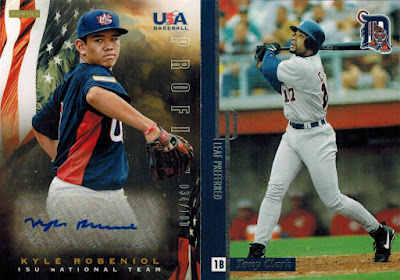 According to the box, one out of every four repacks contains a "hit" of some kind, and Repack #1 produced an autograph, which was quite jarring to see fall out of a stack of '80s commons.

But since I have no idea who Kyle Robeniol is -- he's still pitching in college -- I'll go with Tony Clark here, especially since I love finding defunct and/or long-forgotten brands in repacks (Leaf Preferred?). 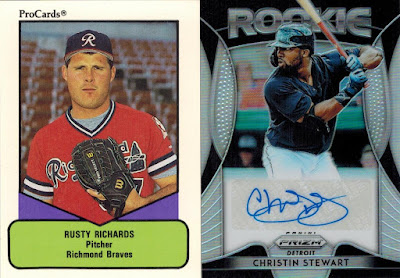 Against all odds, Repack #2 produced an autograph of its own -- and while I've at least heard of Christin Stewart, he's no match against a minor-leaguer named Rusty. 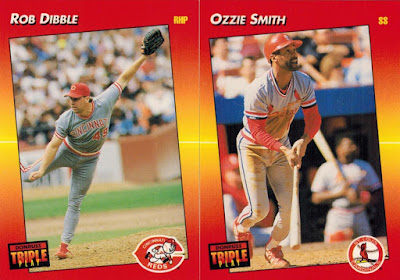 Each of these Walgreens repacks contained an unopened pack, both of which turned out to be 1992 Donruss Triple Play.

This was a far better rip than the packs of 1990 Donruss that seemed to fall out of every repack I bought in the past -- I actually really like this set, and Repack #2 gets the nod (and the win!) for producing an Ozzie Smith card I somehow didn't already have. 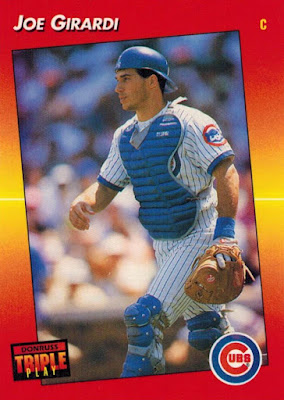 That little battle reminded me how fun Repack Wars are, and while 95 percent of the cards I got wound up in my doubles box, never to be seen again, repacks are always good for a romp through the cheap, random corners of the hobby.

All in all, not a bad way to spend my hour-long break from the general public, I'd say.
Posted by Nick at 5:30 PM

Wow. You are not a Reds fan.

Voting for the Black Widow.

I love these posts..if they had,say,a mystery pack of 20 random 45s records at Walgreen's.. I'd buy 'em!

Wouldn't it be something if the college pitcher made a name for himself in the big leagues? And you pulled his auto from a repack? I'd hold onto that card for a while just to see what happens. :)

Diet coke and baseball cards are my two vices, and sometimes a repack hits the spot.

Love these things, in moderation. Glad to see you had fun on your break.

I love how the Hills card has a Food Town ad clearly visible. Both were NY-area supermarket chains, though I don't think that is what either one is here.

Not sure where, but my buddies and I would watch professional pool tournaments (maybe on ESPN) back in the 90's and Jeanette was my favorite player.

I’m a fan of these repacks if nothing else for the walk through memory lane. Thanks for sharing.

Fun post, and a close match! That Tim Knight card is my favorite, in part from the Food Town advertisement in the background.