Conundrum of the unnecessary 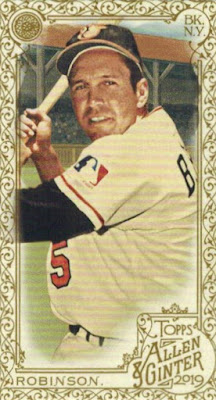 Every year, not long after A&G's annual release, a flood of these supposedly rare "hot box" singles seem to flood the market.

I don't know the odds or anything, but a select number of 2019 A&G boxes contained nothing but these gold-bordered parallels in place of boring old base cards. It's not the first time Topps has done this -- even I, a mere dime box peon, have managed to get my hands on a good amount of "hot box" cards in past years (mostly from, yes, dime boxes). This, of course, leads me to wonder how rare they really are in the first place.

One of our very own bloggers -- Alex of the terrific "Chavez Ravining" blog -- was one of the lucky(?) souls who hit on an A&G hot box last year, and thus reaped the spoils of said gold-bordered singles as a result. 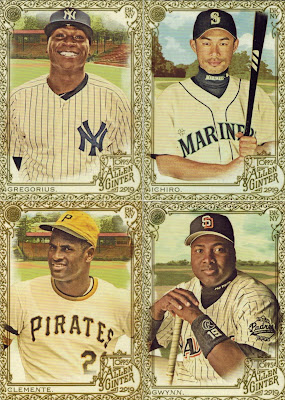 I'm torn on how to feel about these.

On the one hand, I'd be kinda upset if I bought a box of A&G and got nothing but cards like these -- one of my pet peeves is having a parallel of a card without the base version, and this would produce a whole box of parallels without base cards, which I get nightmares just thinking about that. 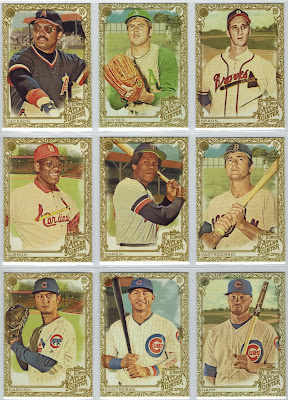 On the other hand, I must admit I really like the looks of these -- so much so that I claimed the Brooks Robinson mini shown above from a trade stack Alex offered on his blog, and heartily welcomed a whole box of other hot-boxers he was willing to pass along to me.

But no matter what I might think one way or the other, there's almost no argument to be made that these are at all necessary. There's no reason for these to exist -- they're not even "chase" cards because there's reams of them on COMC right now for 30-40 cents a piece. That's what the rational side of my brain thinks, but the rabid hoarder side seems to be saying GIVE ME ALL OF THEM!

So, I have to ask myself: is it possible to truly embrace a baseball card if it has no reason to exist in the first place? 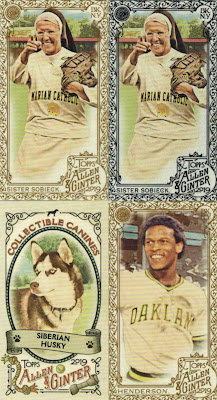 For now, I guess I'm answering yes, because I'm happy to have the heaps of these hot-box things Alex sent me, minis or otherwise. 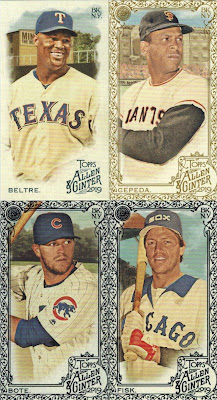 Alex has sent me a few different packages over the last couple months -- many, as you can see, A&G-related -- and because I'm (still) behind in my trade posts, all the goodies are heaped all together into this post.

Not all the A&Gs from Alex were of the hot-box variety -- some were black-bordered minis, and some just plain old regular minis, but all of them were equally excellent. 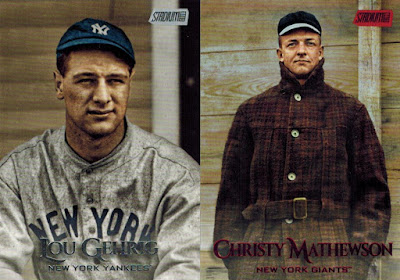 Old dudes posing in front of wood panels in Stadium Club, if that's the kind of niche content you're looking for. 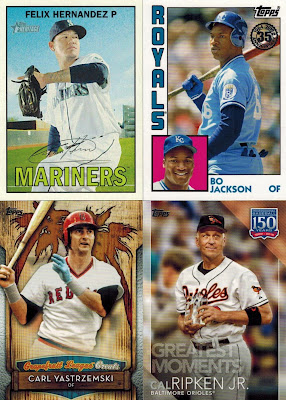 Always nice to see people putting in the time and effort to look through my want lists. 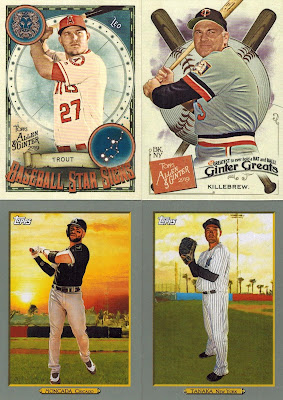 Some people might argue that inserts are unnecessary pieces in the world of baseball cards.

Base cards are why I collect, so ideally I'd like to say I agree -- but it's honestly hard to imagine opening a pack of cards without that slight peek of an insert popping out from the middle of the stack. 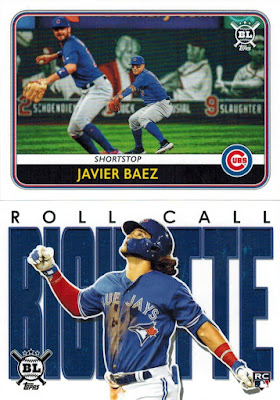 Alex was even gracious enough to help out with some of my brand-new Big League wants here -- that Baez is in the early running for Card of the Year. 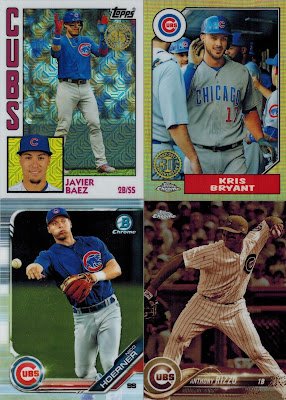 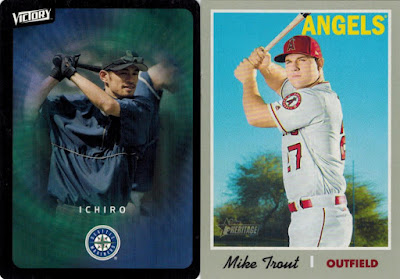 That Trout was an incredible gift from Alex, given that it's Heritage short-print -- with the way the hobby is trending these days it sometimes feels like I have a better chance of someone sending me a T206 Wagner than a Heritage Trout SP.

In his continuing attack on my various want lists, Alex even took down a Dime Box Dozen need with that Ichiro -- to reference back to my pet peeve of owning parallels without base cards, I had the green parallel of that one (as well as almost every other card from that 2003 Victory set) without the base version. 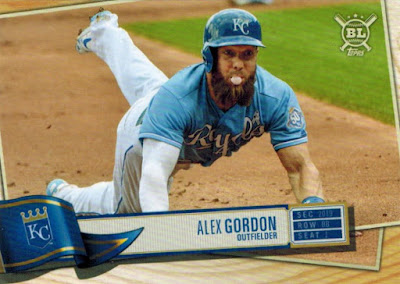 Doubling down with the Dime Box Dozens here -- while it's not the most flattering photo, this Alex Gordon was one of the two remaining base cards I needed from 2019 Big League. 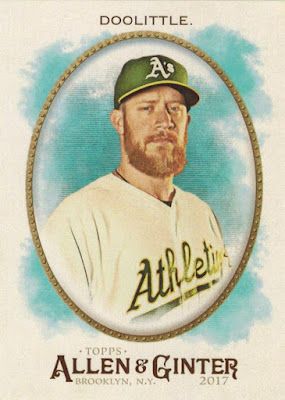 And finally, here's a THIRD Dime Box Dozen suspect from Alex -- a standard A&G base card (not a hot-box version!) I still needed for my blossoming Sean Doolittle collection.

It's easy to drown in the rabbit hole of wondering which of the cards we own are really, truly necessary to our collections. My guess would be very few. But this hobby, I think, is about much more than boiling our collections down to the absolute essentials. I suppose I'm more of a maximalist, and not a minimalist, when it comes to cards. I have multitudes of different collections, and if a card fits into one of those, then I want it, and that card becomes necessary.

Wow,Victory.. been a while since you posted one of those!

As always, happy to help chip away at your want lists! I'm really digging that Baez BL card--definitely a major player in the Card of the Year running. Curious to see how Stadium Club compares to BL this year.

Alex did hook you up! BTW, you hooked me up too! I got the cards, thank you. I still figuring as to how I will be posting them. I think in 3 posts. I'll get you a Bingo card in the next Day or two. WE play Friday 7/31 at 8pm EST.

Old dudes posing in front of wood panels in Stadium Club, is the kind of niche content you're looking for. Thank you.

Great cards! And now you have two of that big league Gordon card!

I could understand being a little annoyed by opening up a box and only finding parallels. But only if I was trying to build the set and needed singles. Otherwise... I'd keep the ones I want for my collections and list the rest on eBay and hope it pays for another blaster.