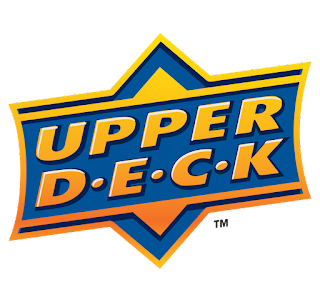 And so we've come to the second episode of this three-part mini-series devoted to anything and everything Upper Deck.

Tonight I'll be going through sets 14-8 in the UD pantheon, aka The Just OK Sets (also the toughest ones to think of anything to write about). One of the main comments I received upon unveiling the first part of this series was the fact that UD's designs tend to bleed together and thus don't lend themselves to ranking. To an extent, I agree -- most of the sets on tonight's list in particular are somewhat interchangeable in terms of their placement here.

But that's part of the fun of doing one of these countdowns in the first place: finding something to like (and/or dislike) about sets I haven't given much brain space to in the past. And me personally, Upper Deck's designs run together less so than Fleer or Donruss. There are a few Fleer/Donruss sets I really like (1984!), but there's way more I have almost no opinion about, which doesn't make for great blog copy.

Upper Deck's a little more countdownable (if that's a word) in my mind, and on that note, let's pick that countdown up where we left off with the #14 set on my list. 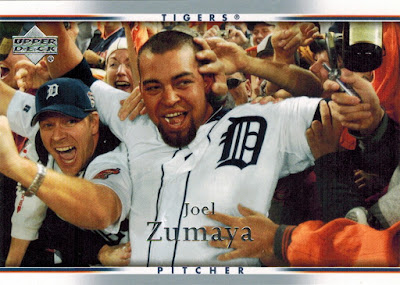 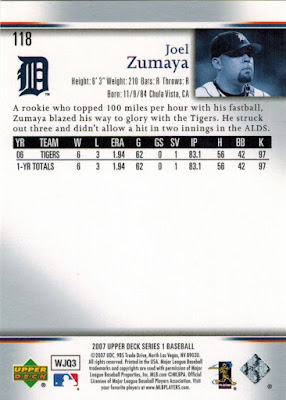 Also brilliantly known as the "Elevator Doors Set," which I can never unsee now.

This design isn't wildly popular amongst collectors (if it's remembered at all), and while it's not a top-tier Upper Deck set in my mind, I still seem to like it more than most. There are a fair amount of good shots interspersed throughout the checklist (this Zumaya is one of the best UD cards ever) and the design is fairly minimal, which for the most part is UD's calling card.

But when you get down to it, 2007 Upper Deck is just too darn dull -- it's hard to look at a card from this set and say WOW (Joel Zumaya notwithstanding, of course). 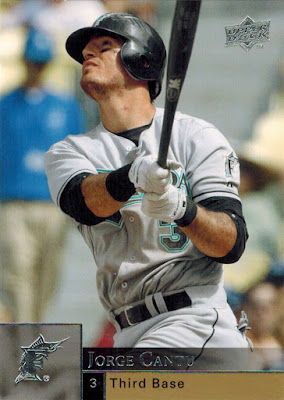 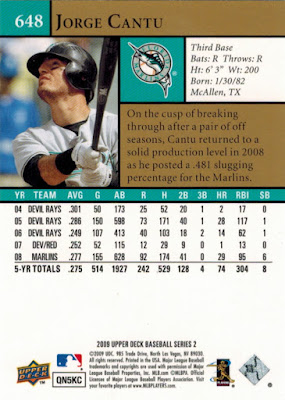 Another resoundingly boring design from UD's later years, which probably didn't help things too much since the brand was on its last legs at the time.

I suppose I don't mind foil as part of a card's look -- it's when it becomes the dominant feature that it becomes a problem. And that's exactly what happens in 2009 Upper Deck (not to mention that brown is almost never a good idea as a primary color). Foil on the company logo, player name, and team insignia just comes off as kinda ugly.

The photography is also a giant step down from what we'd seen the year before, which when you put it all together equals an underwhelming set in the Upper Deck annals. 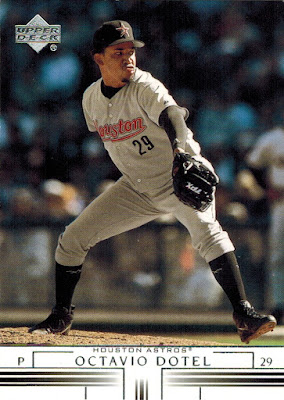 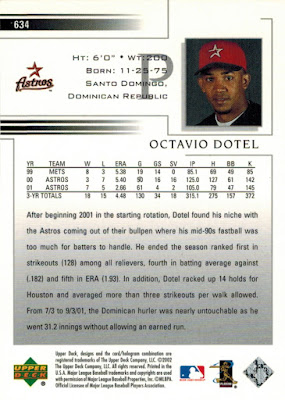 I probably own less of 2002 Upper Deck than any other UD set.

I'm not sure why that is. I mean, I know not many people were buying baseball cards in 2002, but then again I don't have much problem finding 2002 Topps these days. For whatever reason, however, 2002 Upper Deck has kinda become one of those lost-to-history sets. While its elusivity does add a bit of intrigue in terms of my appreciation of the design (thus says the mind of a collector), objectively there's just not a whole lot to comment on here.

I'll keep right on searching for that big dime box of 2002 Upper Deck somewhere out there in the universe, but for now it's just a middle-of-the-road chapter in UD's grand novel. 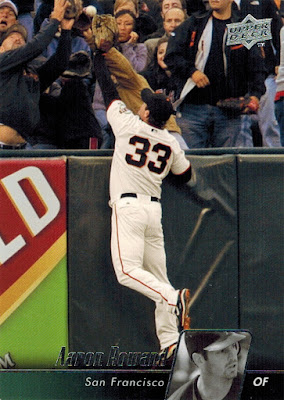 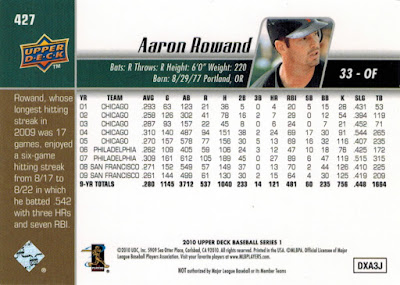 And so we've come to one of the more intriguing designs on this countdown: 2010 Upper Deck.

It's notable for being a) Upper Deck's final baseball set, and b) the only unlicensed UD flagship set ever produced (Topps monopolized the baseball card market prior to the 2010 season). All told, 2010 Upper Deck could've easily wound up a disaster, and perhaps in some ways it was -- UD was sued by Topps for team logo usage because of this set and never produced baseball cards again.

But you know what? I actually don't think it's that bad. Even I was surprised it crept as high as it did on this list. It's unlicensed, yes, but the photos are obscured rather than airbrushed (although, granted, seemingly not obscured well enough, given the lawsuit). Unlike most logoless sets nowadays, 2010 UD doesn't beat you over the head with the empty jersey fronts and plain-colored logos that just scream that THIS SET IS UNLICENSED!

You can tell that UD at least tried to produce a worthwhile set in what would be their final year of existence, and despite its shortcomings, I'll always appreciate the effort. 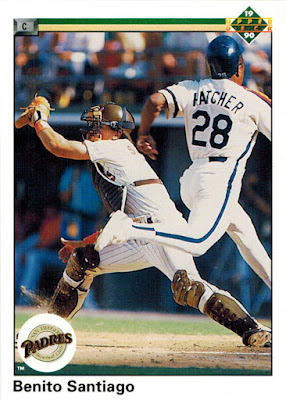 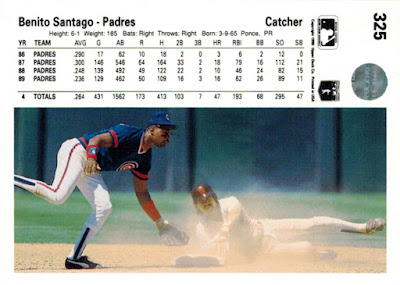 Another plain design from Upper Deck's early years, better done than 1992 Upper Deck which was slotted near the bottom of this list (seems like most people like '92 UD a lot more than I do, by the way).

One thing I like about 1990 Upper Deck is the continuation of the baseline border theme, as introduced by UD's inaugural set the year prior. The photos are nice, too, but I've always been bothered by the fact that a heckuva lot of the back photos are better than the ones on the front (here's an especially egregious example).

Over time, though, 1990 UD has become sort of the antithesis to 2002 UD -- I probably see more of this set than any other in Upper Deck's history, and it's not exactly a design that grows on me with repeated viewings, which knocks it down a few spots on this list. 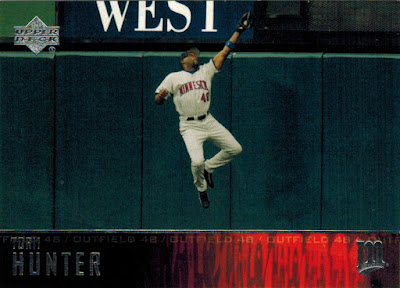 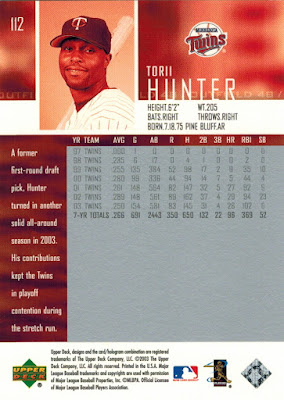 The photography in this set is superb, and it'd be ranked a lot higher if the design wasn't so intrusive.

I like 2004 UD quite a bit, but the nameplates are crammed to the point of headaches. You've got names (in unreadable foil, mind you), position listings & jersey numbers (on infinite repeat like a TV ticker), shrunken iconography of the featured player's hometown stadium, and the team logo. All in a half-inch-tall nameplate.

Talk about overdoing it -- which is a shame, because I truly think this had the potential to be an all-time great Upper Deck set. 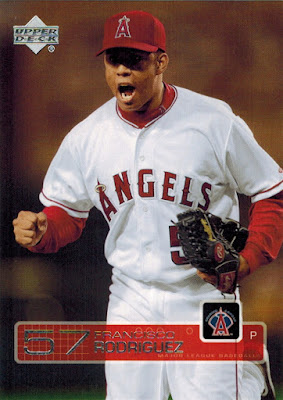 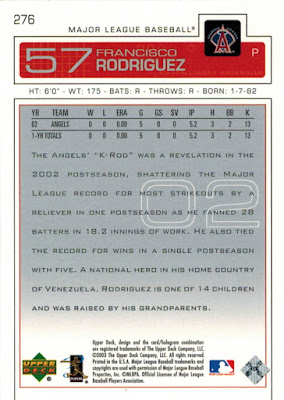 I, admittedly, get 2003 and '04 Upper Deck confused from time to time, but that's the case with most major-brand sets of the era.

I think it has something to do with the all-foil nameplates, although 2003 UD does it a lot better than '04. The photography's right on par with UD's usual striking array, and the design is one of the quieter ones in their annals, which is a good thing. And I always like when jersey numbers become part of the overall design (since I'm not too great at remembering jersey numbers).

And so 2003 concludes the Just OK Sets from the UD pantheon (hope you made it to the end), and I'm looking forward to revealing the best of the best from Upper Deck's annals in the next post of this series.

It's funny that your words about 1990 UD are completely fair yet I still find it to be an improvement on 1989.

Well done again, Mr. Dime Box. I pretty much agree with you on every one of these. None of these are great, none of them bad. The weird thing to me is that '03 really looks like an Ultra set. In fact, I think that Ultra also used jersey numbers around the same time?

I just wish at least once UD would have said, "Screw it! Let's just come up with a really cool border and ditch the foil and the full-bleed photos." Keep up the good work. (You going to the Sports Convention this weekend in Rosemont?)

1990 Upper Deck is much better than '89 and probably one of the best that it's ever made. Wonderful, clear photos.

2010 UD is brutal, an unfinished set full of *wink, wink* "we're not showing logos" photos that makes for some strange pictures and maybe set a record for the most photos of player's sides.

Meanwhile 2007 UD should be rock bottom. Horrible set. Every photo jammed between those elevator doors. It's more evident on the vertical cards than the horizontal, but maybe the worst case of photos being compromised by design.

I like 2009 UD, apparently more than other people do... It speaks to me in some way I can't fully describe, other than that I've always liked the stained-glass-window-y design, despite the foil logos.

I would've ranked 2009 at the top of this group, or perhaps at the bottom of the next group.

I've long wondered whether the unlicensed market would be better today had UD not pushed so hard against the licensing limits.

Another great installment Nick. Looking forward to seeing how you seed the sets that are left in the final grouping!

Night Owl hit it - it's the vertical cards in '07 that show how truly TRULY crappy the design is. Photo selection does not save a shit design like that.

There are some attention-grabbing closing dates on this article however I don’t know if I see all of them heart to heart. There may be some validity but I will take maintain opinion until I look into it further. Good article , thanks and we wish more! Added to FeedBurner as properly online casino real money