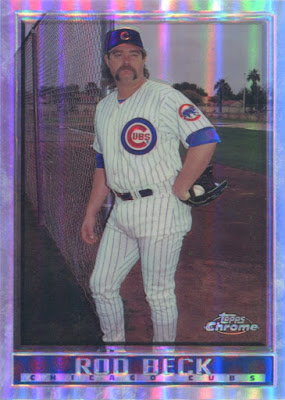 One of the ways I think the hobby has regressed a bit is in the way many collectors enjoy their collection nowadays.

Often times when I'm surveying the card scene on Twitter, I'll see someone post a nice item they recently picked up (that's basically all Twitter is). Invariably, someone always comments with some variation of: Nice! Put that bad boy in a toploader!

Now listen: I'm not saying we have to go back to the '50s or whatever when kids were throwing their cards against brick walls. And I don't want to sound preachy about this --  believe me, I'm not against putting cards in sleeves/toploaders at all. But it seems backwards to me that the first thing some people think of when they see an exciting new card is gotta protect that! Is that really enjoyment? Is it even a hobby at that point?

I don't think so -- anytime I luck into a new refractor, like the above Rod Beck for instance, I'll always take a few seconds oohing and aahing over the way it shines when I tilt it back and forth in the light. 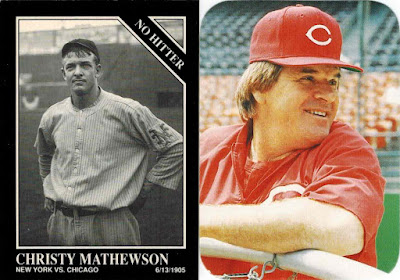 I love that most bloggers aren't like that: we handle our baseball cards, we enjoy our collections.

While the name of his blog might suggest otherwise, I know my buddy Jon of "A Penny Sleeve for Your Thoughts" knows how to enjoy his collection as well. And he knows how to boost that enjoyment for others by putting together awesome PWEs (from which the aforementioned Shooter came) and trade packages (including everything you'll see in the rest of this post) like the ones I received from him a while back.

Oddballs like these are certainly meant to be loved and handled, especially that Mathewson which is the first Prototype from the Conlon set I've ever seen (I didn't even know they existed). 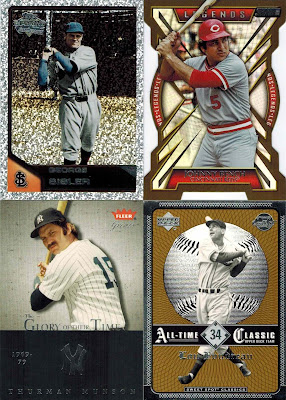 A spiffy quartet of legends. 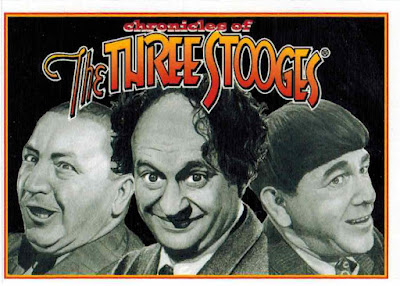 For duty and humanity! 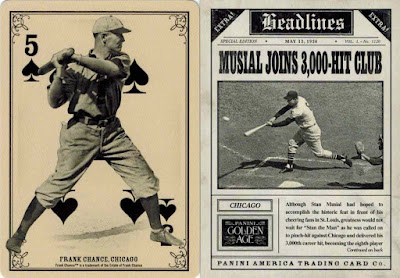 Jon is one of the few other remaining Golden Age fanatics I know of, and he was nice enough to throw a couple of his extras my way.

Seriously, I can't think of a brand that knew how to do inserts better than good ol' Golden Age -- I mean look at these. 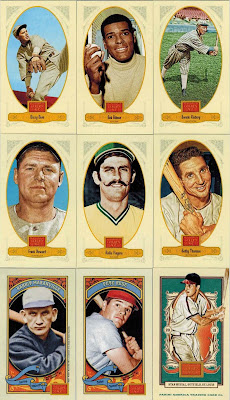 Inserts please the eyes, but minis win my heart. 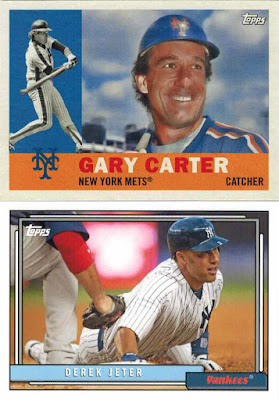 Is it just me, or does it seem like Archives (scheduled to drop in mid-August) is coming out a lot later this year?

I don't like that -- but at least Jon helped me knock out some of my remaining 2017 Archives needs in the meantime, including Jeets, The Kid... 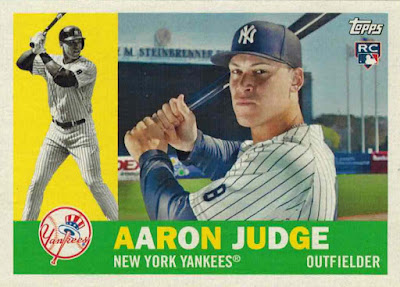 Somehow I failed to pull a single Judge out of the gaggle of 2017 Archives I opened (meanwhile I ended up with four or five copies of many other cards). And because I wasn't about to spend $15-20 on a copy, I figured it'd be relegated to want list purgatory for a couple years at least. But then Jon showed up and put all that to rest out of the kindness of his heart.

This is the kind of card some Twitterers(?) would be crying out for toploader usage. NO! I treated it just like any other treasured new addition -- I flipped it around in my hands, admired the front and back (because it really is a nice card), and sent it off to its happy binder home to be with my other Judges.

Because a hobby is to be enjoyed, not guarded.
Posted by Nick at 5:52 PM

I spend more time "removing cards from sleeves and top loaders" than I do looking at the cards. I don't use them for my baseball cards.

Totally agree with you on the Golden Age inserts, Topps needs to take a page out of Panini’s book there!

I suspect I might be the exception to the rule, but I’m the type of collector who finds equal pleasure on both sides of the enjoyment coin.

Depending on the mood I’m in I’ll get just as much satisfaction from a nickel box, beat-to-hell vintage common as I will some expensive graded HOF RC that I’ll never even *actually* hold due to the slab. I’m not sure why that is, but as I think about it I definitely have cards in my collection that I enjoy the same way you’ve described here with your Judge, and others that I enjoy equally but view in a different light, more as “investment pieces” I guess. What can I say, I guess sometimes I have more faith in the future of our hobby than in the faceless corporations represented in the stock market. I know even my better cards could be “worth” nothing someday, but so could an investment portfolio, and at least the cards will have provided me with a lifetime of enjoyment ;-)

I collect cards for my enjoyment. Nothing makes me happier than getting a card to complete an Indians team set or busting a pack of cards and getting a card for one of my collections. Card collecting should be fun and NOT about the almighty dollar.

P.S. I got your package today, thank you. I'll get them sorted out and scanned soon.

The Golden Age, so aptly named and one of my favorite Panini releases! I love handling my cards, carefully of course. I love the different textures, the feel of the ink - and the smell - let's not forget the aroma of cardboard! I own one slabbed card - a T206 Tony Thebo which is special to me for many reasons. I do wish I could reach beyond its plasticized tomb just once and hold Tony Thebo in my palm.

Love Golden Age...bring it back!

I'm with you, cards are meant to be enjoyed, looked at and handled. I'm not above putting something in a penny sleeve but I only use top loaders for two things ... as dividers in my 3200 count boxes and for oversized 1950s cards.

Wow, that Rose is fantastic Nick. Never seen one of those before. Who's the oddball manufacturer if you don't mind me asking.

One of the reasons I started blogging was to enjoy my cards more. Instead of getting a card and throwing it in a box, I'll take the time to examine and even post about it.

I don't mind the suggestion to "put it in a toploader". To me, it just means "that one's a little more special than most, so preserve it". I'd be appalled and annoyed if they thought I should get it graded so it will be worth 400% more. (Which it really wouldn't be.)

When people finally see that I'm the type of guy who gets 1/1's signed and certified autographs inscribed, they back off lol.

It's amazing that you were able to get so much just from these couple of cards. You seem to have inspired quite a bit of discourse, here, and on Twitter... that must be a nice feeling.