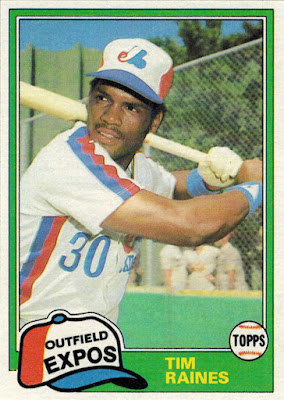 Am I the only one who feels like they're cheating when they purchase a desired card online?

I've never heard of this phenomenon outside of my own mind, so I tend to think it's just me and my overthinking brain. But it's true: while I'm obviously happy to eventually obtain any card I decide to buy on the 'net, there's a certain sense of uneasiness about clicking that Purchase button and knowing that the chase is over...just like that.

I think that's why a lot of my internet shopping feels a bit anticlimactic: it seems like I'm betraying that thrill of the chase which I preach so much about on this blog. To illustrate, I purchased the above '81 Topps Traded Tim Raines rookie online last week for a little under $5 shipped, and it arrived a few days ago. It was the unquestioned crown jewel I needed to be truly proud of my newly-christened Raines collection, and now it's mine.

And yet there's still a part of me that's a bit sad knowing the chase is dead: I'll never receive it out of the blue from a fellow blogger, nor will I ever unexpectedly stumble upon it at a random card show. 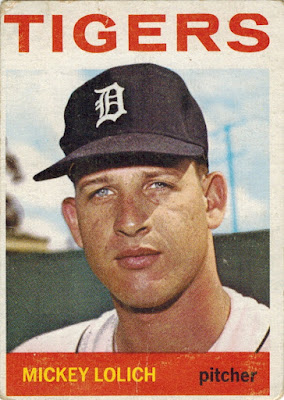 Part of the reason I finally decided to buy the Raines was precisely because of its elusiveness: I hadn't seen it at any shows (seriously, not a single copy) nor had anyone made any noise about sending one to me.

Yet other times, in a backwards way, it's in spite of a card's ubiquity that makes me decide to finally break down and take to the 'net. I passed on this '64 Topps Mickey Lolich RC at a show a few months back and kicked myself for doing so. Lolich is a fan-favorite player collection of mine, and his rookie is one of the more affordable goodies of the '60s.

Out of annoyance with myself, and to appease my mind, I immediately went out and purchased a copy on Ebay that very same day (granted, for a few bucks less than what I could've bought it for at the show, which is one of the internet's perks). 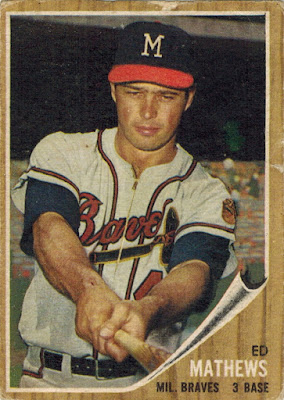 I don't feel bad about buying oddballs, regional issues, or any other rare cards online that I know I have no hope of otherwise finding on my own -- that's what the internet is for, isn't it?

And yes, the 'net has its fair share of great deals if you look hard enough: I pounced on this '62 Eddie Mathews for $1.99 shipped before the Ebay seller decided to get back on whatever meds he'd stopped taking. 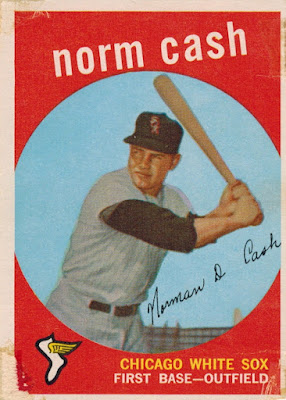 Deep down, I know the so-called "thrill of the case" can only go so far, and yet that internet insecurity persists.

There are certain cards you can forget about ever seeing in off-condition and/or on the cheap in the wild. A prime example of this is the infamous Vintage High Number. It's depressing when a VHN also happens to be a highly desirable card of mine. See: Norm Cash's 1959 Topps high-number (#509) rookie, a long-wanted single since it's the only one I've ever seen of him as a member of the White Sox (with whom he spent the first two years of his career).

Most high-numbers I see at shows are in great shape and thus insanely priced, so it was really a no-brainer to pull a trigger on this copy (note the paper loss) when I saw it online for less than half the cost of a blaster. 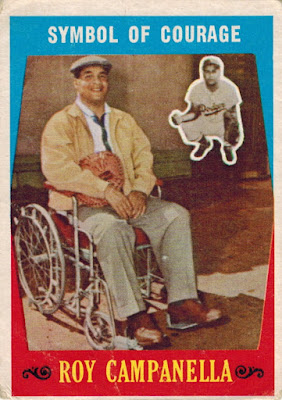 I don't mean for any of this to sound like I somehow regret buying any of these cards -- on the contrary, the only reason I eventually turned to the internet was because of how badly I wanted them.

I guess the source of my online insecurity mainly entails the great thrill of buying something in-person, the thrill of giving a vendor my cash, the thrill of holding the card in my hand and being able to say IT'S FINALLY MINE. That's really half the fun for me. The internet, for all its bells and whistles, can never match it.

But I can only see so many '59 Campys priced north of $40-50 at shows before taking to the internet and purchasing one for $15, even if the experience of it isn't quite the same. 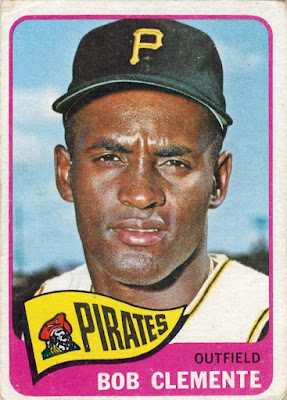 Perhaps the supreme purchase of my online career is the '65 Clemente I bought for a tad less than a blaster last year.

It's darn near close to what I imagine the perfect baseball card to be: my all-time favorite player on my all-time favorite design. What more do you need? It's funny, because that's the same question I ask myself whenever that online insecurity rears its ugly head -- I mean, I'm getting the card I want right then and there, often for a lot less than I would've paid had I bought it in-person. And I don't even have to leave the house to do it.

And so the question remains: Jesus, Nick, what more DO you need?
Posted by Nick at 6:02 PM

Glad you got the Raines card,probable reason you had a hard time finding it was because it was in the update set that year.

I didn't get Mark McGwire's 1985 Topps card until a few years ago...and got it from a seller on Listia. So I didn't even pay actual money for it...just credits. No guilt, just a feeling of I finally f'n got it!

I kind of get the sentiment of being sad that a long search ends after the click of a button, but the type of cards I collect pretty much limits me to the internet. I love my trade partners on this section of the blogosphere and I can appreciate the local card shop/show just fine, but they're not exactly going to have the specific types of cards I'm after (ie prospects, Torrens and amateurs lol). eBay/COMC is my best bet there.
Also I tend to use the internet when I'm acting out of impulse. Like when I feel I need something NOW, rather than later. The feeling of needing instant gratification tends to overpower whatever kind of "play the waiting game you moron, it'll be cheaper later" thought that runs through my head.

Nothing wrong with getting those last few elusive singles after you've exhausted packs, trading, and shows. I've got so many needs that it's almost necessary to clear up a few every so often so my lists don't get unmanageably long.
The only guilt I feel is when I find a couple singles that I haven't seen elsewhere and then add sixty bucks worth of other stuff to the order.

I know what you mean. For me, collecting is about the hunt, and getting a card by choosing it online is sort of joyless. After all, just about every card ever is available with the click of a button.

I've started collecting certain team sets, and am planning on searching the boxes at baseball card shops and card shows to complete them. I'd like to start trading with people, but unfortunately, my collection is still pretty weak.