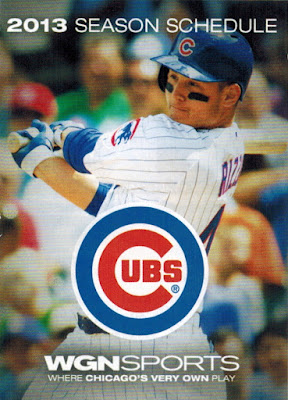 I make it a point not to dabble too much into the non-card facets of sports memorabilia.

For starters, I just don't have much interest in hoarding SLU figures, game-used equipment, etc. It's never been my bag. And even if it was, I wouldn't have any room to collect that stuff because my room has already been bursting at the seams with baseball cards for much of my adult life.

That's not to say I don't get urges. In fact, the flea market -- the heavenly place I once again attended this past Sunday -- brings out the crazed collector in me more often than I'd like. Quite often at the flea market, I find myself thinking things like Ooh, look at that Ron Santo bobblehead! or Ooh, look at that Frank Thomas poster! And I always have to tell myself: Nick, you don't collect those things. Remember?

This weekend, however, that voice won out on a couple (albeit) palatable occasions -- I purchased this Cubs schedule, for example, despite my usual apathy towards such items (and yes, it'll count as a card towards my Anthony Rizzo collection). 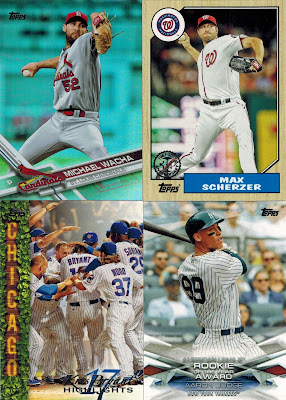 My regular card guy from years past was back in action yesterday...but someone had bought his entire dime box before I got there (DRAT!).

As a result, I had to be content to pick through his quarter/50-cent/dollar boxes, which included the aforementioned pocket schedule and these more conventional cardboard goodies. 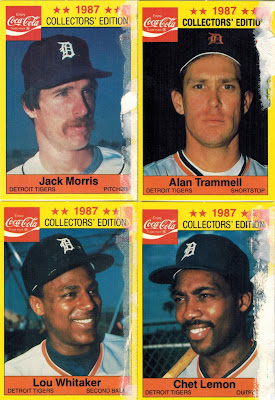 I also picked up a team bag full of these '87 Coca-Cola Tigers, which as you can see didn't separate as well as I'd hoped after over 30 years of being stuck together.

No matter though: I still love oddballs like these and it's not like a paid a fortune for them -- the vendor charged me a whopping two bucks for everything I purchased from him. 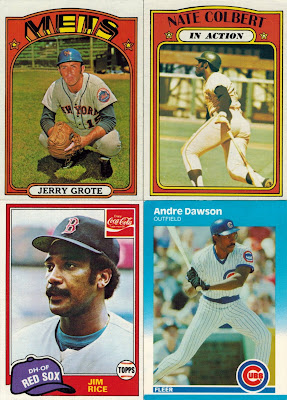 My current regular card guy was there on Sunday as well, though he hadn't much replenished his stock following last week's high-number bonanza.

I did manage to pick these up at 3/$1, however, including a couple nice '72 high numbers I somehow missed the last time around. 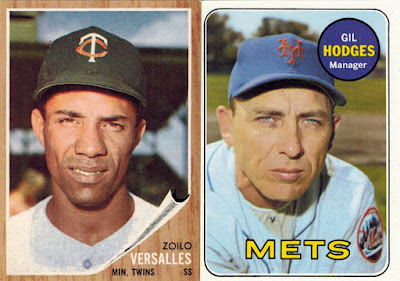 This vendor's higher-priced stuff featured a few changes from last week, and I plucked these two from the rubble.

I paid a whole $5 for the Versalles (a high-number at #499 in the '62 set), probably not a price I would've paid at a card show or anything but one I figured Why not? when I saw it on Sunday (note the immaculate condition, too). 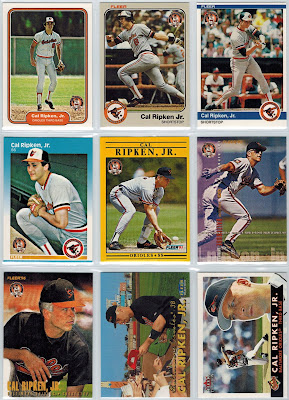 Sometimes (usually at places like the flea market) people's prices will be so far overboard that I won't even ask about items they have that happen to be unpriced, and I've had few regrets about that.

This happened at a table near the end of Sunday's flea market run. A guy had ordinary base cards priced at something like $2 a pop, and a big part of me figured it wasn't even worth asking about the 2001 Fleer Ripken box set he had that caught my eye (unpriced, of course).

But despite all things pointing to the contrary, I still asked: How much? 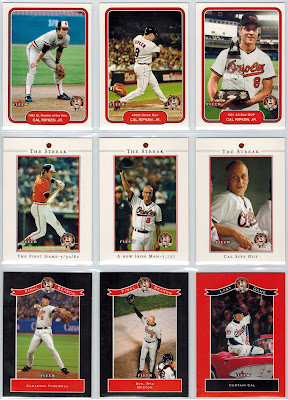 Sold! Yes, I fought the urge to ask why this entire set was the same price as many of his ordinary base cards, but I figured I'd quit while I was ahead and just fork over the two dollars, no questions asked.

This 60-card set -- a combo of Fleer reprints and originals -- was a steal at just two Washingtons, and it highlights why I've kinda come to like these one-player checklists: lots of mini-collection hits and otherwise banner photos you wouldn't otherwise see on cardboard. 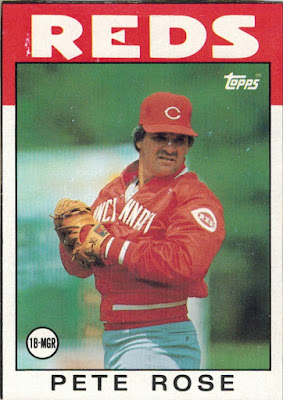 Lastly, the penny card guy was back, albeit without his penny boxes (not a huge tragedy since I've already seen all his penny cards).

In their place were a few boxes and binders of dollar cards, from which this Pete Rose came -- not something I'd normally pay a buck for, but I like box bottoms (and I cannot lie). 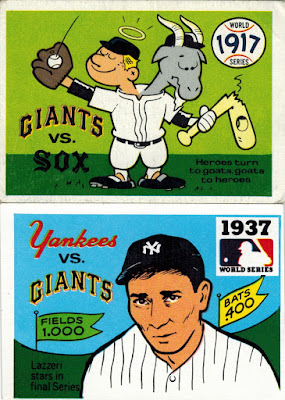 The biggest draw of his table was the large lot of '70s Fleer Laughlin cartoons he'd recently acquired, which I was excited to see because holy hell do I love these. 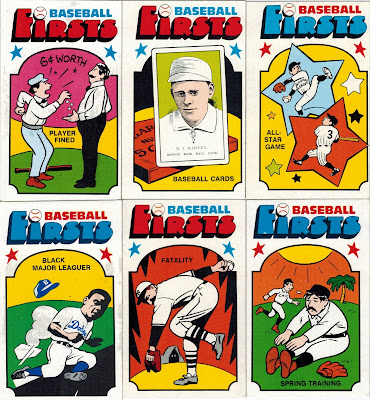 Cartoons are usually hit or miss on cardboard, but for me these are a resounding hit on all accounts.

They're a bit tough to come by and a buck per is actually a great deal (the guy even threw in a few for free). These Famous Firsts in particular are excellent because they chronicle some lesser-known facets of baseball history: first fine, first spring training, even first baseball cards! (How meta.)

My favorite of the lot is the Jackie Robinson, though a close second has to be that Fatality card (documenting baseball's only on-field death with Ray Chapman), even though it kinda gives me the heebie-jeebies. 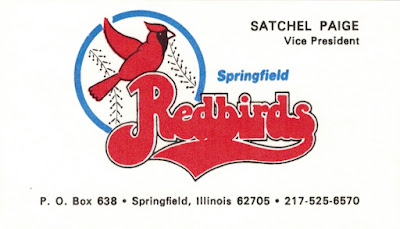 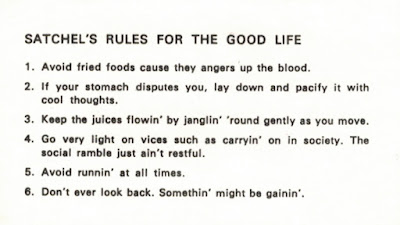 But the most out-there item I found from this guy's dollar boxes was, yes, another non-card piece of ephemera: a business card.

But not just any business card: Satchel Paige's business card(!), complete with Satch's famous Rules for the Good Life on the flip side. Apparently Paige was VP of the minor-league Springfield Redbirds for a short time in the early '80s, and from the looks of it he had the business cards to go along with the title.

Business cards and pocket schedules aren't anything I intend on collecting in the long run, but I'm still happy I bought them at the flea market this weekend -- just as long as I take Satch's advice and go very light on such vices.
Posted by Nick at 5:36 PM

If you want some more Cubs pocket schedules at any time, let me know. I grew up in the Cubs market and have tons.

A Satchel Paige business card? How have I never seen one of those before? And how long will it now take me to find one?

I really like those Laughlins, I need to keep more of an eye out for them.

I've adhered to Mr. Paige's rule #5 quite seriously over the years 😁

Great stuff as usual. That Paige business card is awesome! You don't see these kinds of things too often.