The rule of threes 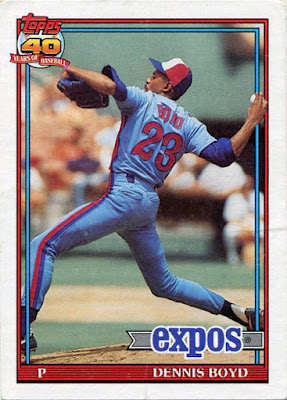 A lot of my past lapses in posting have been due to lack of inspiration.

Now, though, if you notice a long delay in posts around here (as you may have noticed so far this week), it might actually be because I have stuff to do. I started my new job as a bookstore clerk on Tuesday, and I'll probably be working three days a week from here on out.

Couple that with the fact that I start school on Monday, and that results in a painfully small amount of time for blogging. So, I guess what I'm saying is...don't be surprised and/or alarmed if this blog goes dormant for days at a time. As a personal goal, I'll try not to let more than three days go by without a post. Call it the "rule of threes."

Threes have, in fact, been wild around here, as I recently received three different packages in a short span of time from reader Adam E., who, as I've noticed, has sent cards to a couple other bloggers as well. Adam originally contacted me saying that he had one of my Dime Box Dozen needs with this '91 Topps Oil Can Boyd.

You'd think I'd have it already, but, after John sent me the micro version of it, I discovered to my horror that the standard base card had slipped right on by. 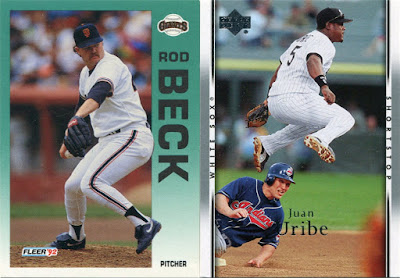 Adam, like so many other readers I've traded with, proved to be quite generous in the batch he put together around Mr. Boyd.

The Uribe is a new double dip for the archives, and the Beck is another addition to my budding collection of his.

One of the first things I plan on doing with my first paycheck is placing a rather large Just Commons order (large as in quantity, not price), and, as of now, I have north of 60 Rod Becks ready to go in my cart. 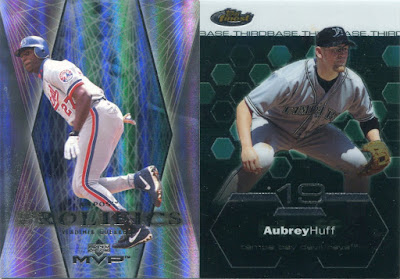 A couple rather loud finds for a couple of my top-tier player collections.

They're not all that well remembered these days, but Topps Finest had some odd designs in the mid-to-late 2000s. 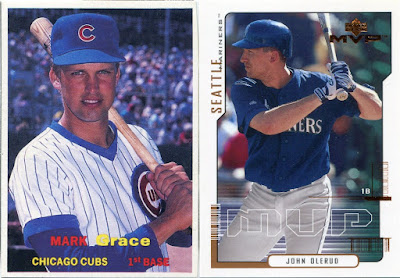 Another pair of new adds of two of my favorite first basemen in the history of baseball.

The Grace, by the way, is a fantastic '57 Topps-style oddball from Baseball Card Magazine, which reminds me... 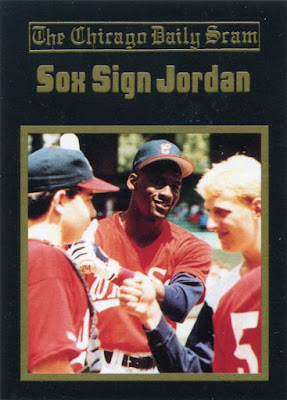 ...Adam went to town with the oddities in this package.

I'm especially a fan of the late '80s/early '90s oddballs that look like they were designed in someone's basement. I've heard that some of them were actually manufactured by a company called Broder, although I'm not exactly sure how to recognize them as such since most of these contain little (if any) copyright info.

Either way, this newspaper-ish oddball of Air Mike is boss. 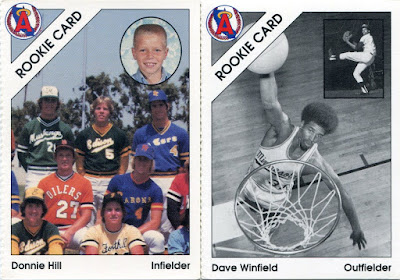 These UD lookalikes appear to be ripped from a publication of some sort, and they feature shots of then-current Angels players from their younger days.

Dig the Afro'd Dave Winfield hoopin' it up at the University of Minnesota. 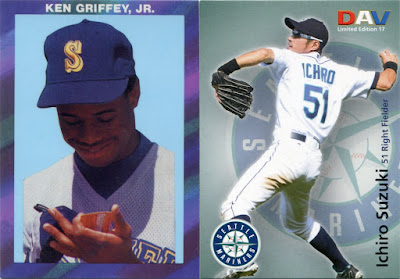 The Ichiro comes from a DAV oddball set designed to honor veterans, and I'm guessing the Griffey is one of those mysterious Broders that I just discussed.

I like the meta image of Junior signing what appears to be a copy of his '89 Donruss rookie card...on a baseball card. 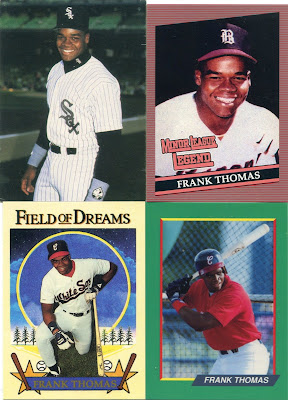 Big Frank caused quite a stir in his day, and I guess the oddball companies took note.

This quartet of oddities are all fantastic in a very offbeat type of way, but I think my personal favorite is the Field of Dreams one. 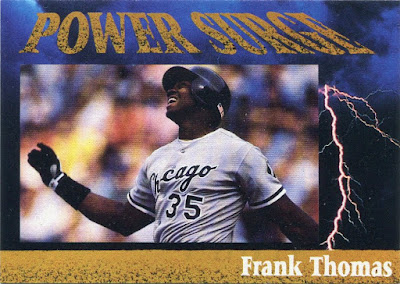 Adam capped off this initial package with an unprecedented fifth Frank Thomas oddball.

Perhaps these oddball manufacturers foreshadowed the craziness that brands like Pacific would begin to bestow upon us in the late '90s. 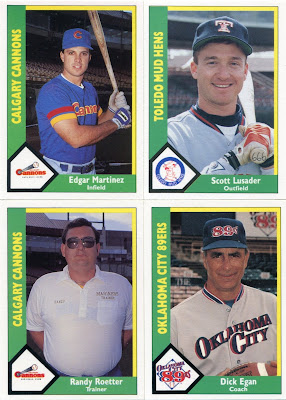 But, as I said, that was just one of three different packages that Adam sent my way.

The second was yet another oddball-laden offering that started off with a bunch of neat minor league issues.

There's so much to love here. The sight of a young Edgar (actually Tino) Martinez (that logo on his cap looks awfully familiar)...the "666" on the bat knob of Scott Lusader...the beer-bellied trainer...the coach holding a football.

Ah, the joys of the minor leagues. 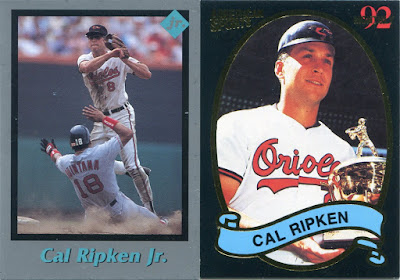 Adam shifted to the bigs with these two Ripkens, both of which qualify as mini-collection hits as well.

The one on the left is from Tuff Stuff Jr., the right hails from American Monthly.

Both are (were) baseball publications, and they have me wishing for the days when something other than Beckett was available for us card collectors on magazine shelves. 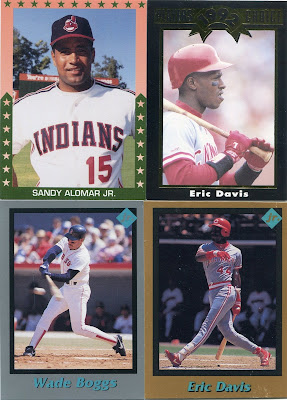 Here's four more oddballs, because one can never get enough oddballs.

That just about did it for Adam's second mailer... 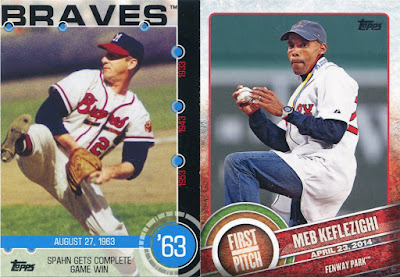 ...but, unbeknownst to me, there was one more to go.

Adam took a more contemporary route to kick off this third group of cards, knocking out a couple of my 2015 Topps insert needs here.

While I'm progressing at a painfully slow pace, I am still aiming to complete this year's "First Pitch" set. 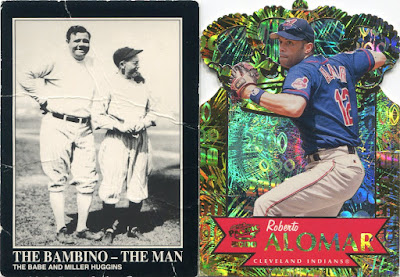 In the note he included with this batch, Adam noted that he'd opened a repack and that his toddler son got his hands on a few of the cards that were inside.

A few of them wound up in this mailer, so you could say I was on the receiving end of some "toddler-used" cards.

Perhaps it'll be the next big thing in the world of baseball cards. 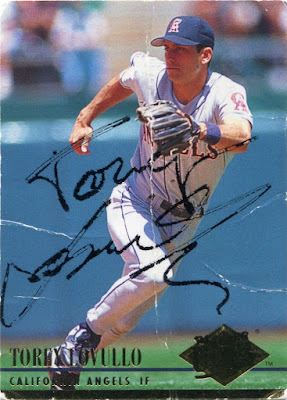 Apparently, that same repack contained one of the strangest occurrences I've ever seen in this hobby.

I'm no handwriting expert, so I can't tell you whether or not this is an authentic Torey Lovullo autograph. (Lovullo, incidentally, is currently acting as the manager of the Red Sox while John Farrell undergoes lymphoma treatments...get better soon, skip.)

What I do know is that, real or fake, Adam pulled an autograph out of a repack, which is odd enough. 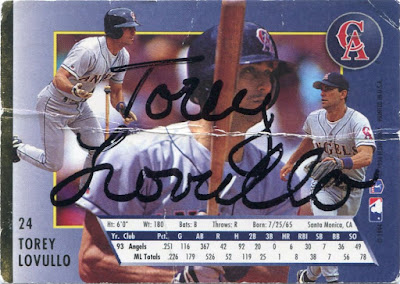 It was made doubly odd by the fact that it contained an autograph on the back as well.

This doesn't look anything like the signature on the front, so I'm assuming that this one (if not both) is a fake. This brings a couple of questions to mind.

1) Why would someone sign the back of a baseball card?

2) Perhaps more importantly, why would someone forge a Torey Lovullo autograph?

I'm guessing it was the handiwork of a card collecting kid, which is understandable. I did the same thing as a young collector, trying to impersonate the signatures of my favorite ballplayers.

And that capped off a wonderful three-spot of swaps with Adam, my newest trading buddy. He's a Mariners collector, which is good because, since I had yet to trade with a M's fan at the time, I had a decent-sized stack of extras to send his way.

So, yes, my blogging may take a hit in the months to come, but I'll do my best to keep my trading quota going.

Because there is no such thing as too much trading, is there?
Posted by Nick at 6:14 PM

Good stuff from Adam! I was lucky enough to get some of those oddballs from him too.

"1) Why would someone sign the back of a baseball card?

2) Perhaps more importantly, why would someone forge a Torey Lovullo autograph?"

Cocaine is a helluva drug.

Fun post to read! I appreciated reading about the cards you really enjoyed. For the oddballs, my parents had purchased a large collection of cards for me from a guy off Craigslist a few years ago, and it contained a bunch of those oddballs. Included were probably about 50 copies of that Frank Thomas Field of Dreams card, and another 25 copies or so of that Michael Jordan.

Very nice cards Nick. Go ahead and tell Adam I'll take one of those Jordans. BTW, your box is about a week from being filled, lets be safe and say 2 weeks. By that time, you should be over the "new" start at school combined with the work, you should be ready for a MONSTER!

I want to say that "Broder" is the name of a guy, not of a company, and he probably did produce these out of his basement... at least the ones he actually made.

Broder is the generic term for unlicensed cards printed during the junk wax era.

I think the story is there was this photographer, Rob Broder who would go around taking pictures of MLB players and printing up his own cards; as is the cards were not licensed by MLB and /or MLBPA and were not recognized by Beckett [because in theory, the cards could be reprinted over and over to meet demand].

With the baseball card boom of the late 1980's-early 1990's, all sorts of folks printed all these 'junk' cards featuring the hottest players of the day, to try and sell at card shows and also baseball card shops.

Great oddballs, but I gotta admit... Zippy's comments stole the show at the last second.