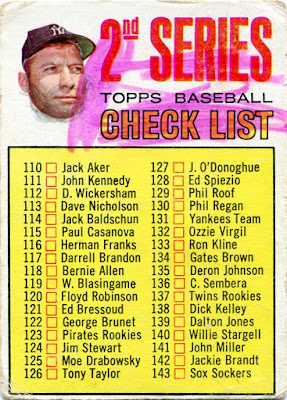 We've made it through the dime boxes and Stadium Clubs, and now it's finally time to recap the remaining portion of my day the National.

The discount vintage, of course! Whether you're there for the high-dollar oldies or the discounted gems, the National is definitely the ideal place for the vintage enthusiast. Almost every table, it seems, has some kind of vintage on display.

Granted, about 95 percent of it is way, way out of my price range, but at least I was able to get some window shopping in as well. (I'll own a '52 Topps Hoyt Wilhelm...someday, probably when I'm a lot richer.)

But I'm happy to report that I was able to fit the remaining five percent of the National vintage into my budget, and there were a fair amount of deals to be had. The very first table I stopped at had a box of quarter vintage for me to peruse, and imagine my surprise when a real-live Mickey Mantle fell out of it.

Sure, it's a checklist, and a checklist littered with pink marker, at that. (Some creative soul even drew a pink mustache on The Mick.) 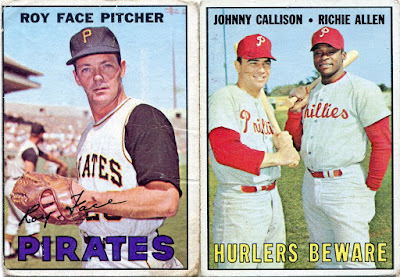 Mantle aside, I've come to grips with the fact that I probably won't be finding any huge names in a quarter vintage box.

But that doesn't mean I can't come away with some surefire scores, by any means. Discount vintage makes middle-of-the-pack guys like Roy Face a joy to collect. I've built my somewhat modest collection of him quarters at a time, it seems.

And shame on me for ignoring those beautiful "combo" cards from '60s Topps all this time. 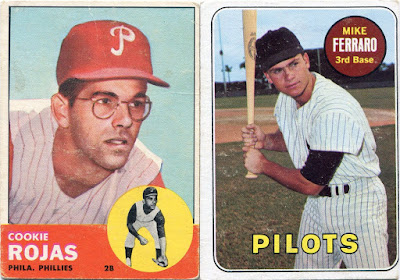 The Ferraro is another tick in my somewhat serious, somewhat tongue-in-cheek quest to obtain every Seattle Pilots card ever made.

And, for just another quarter, I was ecstatic to add a Cookie Rojas rookie card (which features one of the earliest examples of airbrushing) to my purchase pile.

Funny, because I just stumbled upon a clip that features Rojas partaking in one of the most intense ejections I've ever seen in a ballgame. 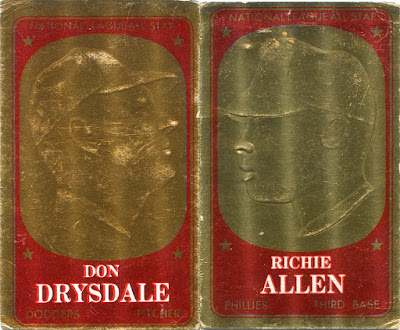 That first table also had a fifty-cent vintage bin tucked away in a corner.

I'm not a huge fan of '65 Topps Embossed, but I'd be crazy to pass on cards of Drysdale and Dick Allen for a couple quarters per. 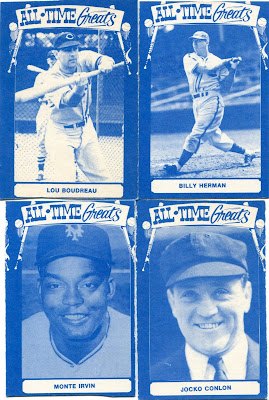 They appear to be hand-cut from a publication of some sort, which explains the sloppy scissor job. 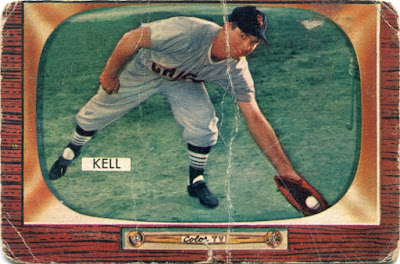 The very next table I found (we're still in the first aisle here) had a small dollar box of vintage for me to pick through.

This was the same guy with the nickel boxes I briefly mentioned in the first post of this series. The dollar cards were mostly low-grade, no-name '60s vintage, but, as is often the case, there were some gems to be had with a little digging.

This '55 Bowman of former AL batting champ George Kell was a steal for a wrinkled Washington. 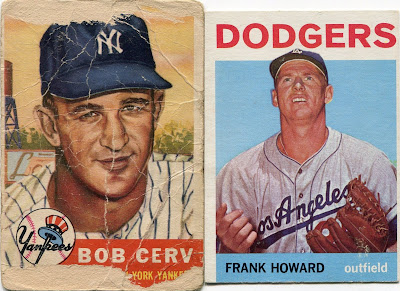 To put it lightly, Bob Cerv is in rough shape. Creases, heavy paper loss...you name it, it's got it. The way I see it, though, I'd probably never drop the funds it would take to obtain a decently-conditioned '53 Topps Bob Cerv (his rookie card), so I'm more than happy with that weathered copy for now.

And, like I said, it only set me back a buck. 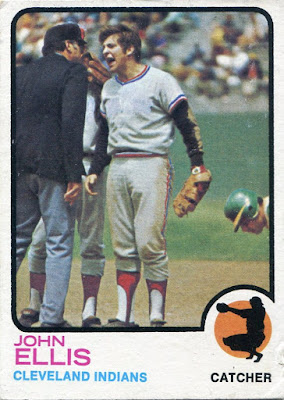 This same vendor also had a snap case of '73 Topps high-numbers for fifty cents a pop off to the side of his table.

It was then that it hit me to search for this card (#656 in the 660-card '73 Topps checklist), one that I surprisingly had never seen until it popped up on Night Owl's blog not long ago. It's a mini-collection hit for me, and, more than that, one of the best examples you'll find of the outside-the-box photography in this glorious set.

I did a little research and found a game that may be the one featured here. I couldn't find any contests in which John Ellis was ejected, but I did come across one where he was replaced at first base (which would explain why he's not wearing any gear despite the catcher position listing) in the ninth inning of a Yankees-A's game on August 24th, 1971.

I'm no detective, but that's my best guess. 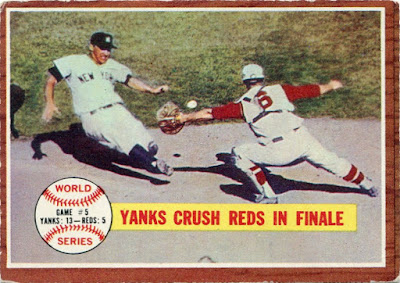 The next aisle over featured a vendor with a big bin of cards priced at a buck each or 3/$2.50.

I found nine to my liking after all was said and done. (Yes, the guy charged me the exact $7.50 price tag, which is why I had two quarters in my pocket the entire day even though I hate carrying change.)

This Fall Classic play at the plate was among the day's discount vintage highlights. 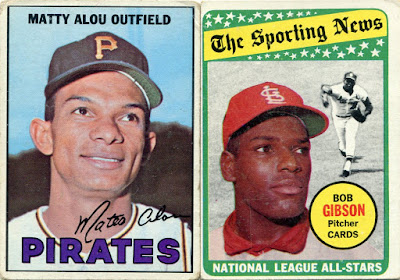 I flip out over finding anything new of the Alou brothers, so unearthing a '67 Topps Matty Alou in that massive bin was a big score.

And, sorry, but there's no sneaking a vintage Bob Gibson past me for under a buck. 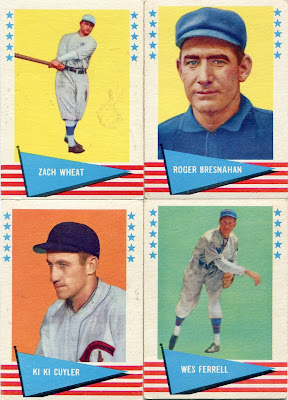 They weren't very well-received in their day, but I've always enjoyed this set quite a bit. It's hard to find many other cards of a lot of the players featured.

I mean, it's not every day I add a new Kiki Cuyler to my collection. 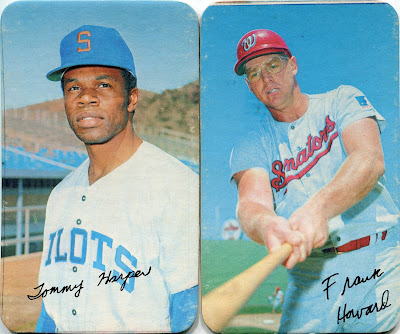 I don't go out of my way to track down Topps Supers, but when I saw a stack of them in a dollar box a little later on in the show, I had to at least take a peek.

I've already mentioned the Pilots and "Hondo" in this post, and here they are again. (That's speedster Tommy Harper on the Pilots card.) 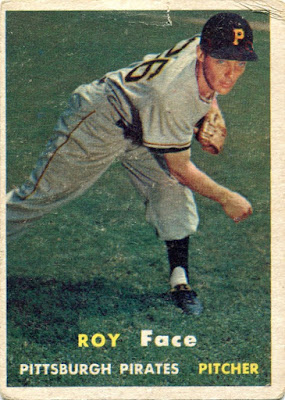 One of the last tables I stopped at on Saturday had a bunch of piles of miscellaneous dollar vintage on display.

There were two vendors behind the table, and both of them had their faces buried in their cell phones as I was trying to pay for my purchases. It took a couple minutes to get their attention, and a soul less honest than I could've walked off with the items without the two guys even knowing.

But I hung around until one of them spotted me and finally payed the six bucks for the six pieces of discount vintage in my hand. Most of the cards they had were heavily creased and/or looked like they'd been through a flood.

A few were to my liking, however, and that included another appearance from Discount Vintage MVP Roy Face. 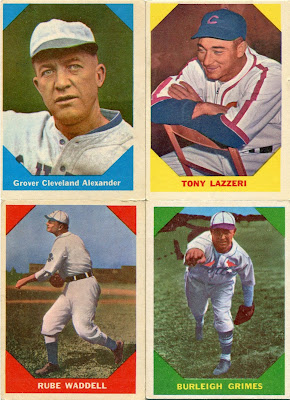 Four of my six dollar finds from this table came in the form of, yes, more vintage Fleer Greats singles.

These are from the 1960 edition, and I like this design a bit better because of the overall color of it. The four I picked out were, again, less-heralded legends (if that makes any sense), and, better yet, the ones I decided on all have a built-in unfamiliar uniform factor.

That's my first card of Grover Cleveland Alexander as a Cub, my second of Tony Lazzeri as a Cub (and a card I've actually wanted for a long time), my first of Rube Waddell as a St. Louis Brown, and my third of Burleigh Grimes (what a great name) as a Cardinal. 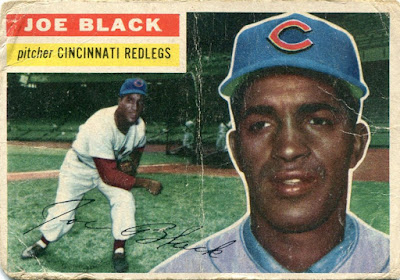 Though his name isn't as well-known these days, Black was one of the first great African-American pitchers in big league history, albeit for a short period of time.

He won the Rookie of the Year award as a Dodger in 1951, and, though he never quite managed to recapture the success of that season, he hung around in the majors until finishing with the Senators in 1957. However, his '56 Topps card as a Red (or Redleg) goes down as his sunset card, and, at a buck, it more than fit into the day's budget.

I saw people pull out wads of cash bigger than my head during the National, but I'll always be comfortable with my modest funds. If I fit cards like these into my budget, well, then I'd call the day a success. Thanks, discount vintage gods.

I would call that a successful day. A lot of great buys

I didn't see that Cerv card when we were at the show...might be the most "well-loved" card at the whole show!!...ha-ha!!

I love seeing these posts on The National. Chicago will likely be the closest it ever comes to me (I'm hoping for one in St. Louis), but maybe one day I can make one, at the least to say I went to one.

Man, I paid way more for that Cookie (just a couple of days ago) than you did. What a steal!

Also, I've always loved vintage Fleer. That Cuyler and Lazzeri are amongst my favorite cards in my collection!

That Burleigh grimes is choice; '60 Fleer is an unheralded set I can dig on.

Those '61 Fleer greats are (for lack of a better word) great. It's technically vintage and yet honoring legends. Little did Fleer know that they were onto something back then...

I love how many different sets are getting love. I spent the post going "nice... nice... love the action shot on that "Yanks Crush Reds" card... nice... Supers? SWEEEEEEEEEEEEEEET!!!"

Glad you were able to make progress on your kinda sorta Pilots collection.

The Face cards are great. He is one of favorites to collect too.

Very nice pickups. I kinda dig that '73 Topps. I too am working on a Seattle Pilots collection.

It's probably pretty rare for a checklist card to be marked up that much, but none of the boxes are checked. Maybe the previous owned was miffed he wasn't getting any cards s/he could check off?

Gotta love the discount vintage! Sometimes the wear and tear on the older cards makes them even more appealing to me - the big savings don't hurt much, either.

Gotta say I'm a tad jealous! Maybe next year will by mine, it certainly wasn't this one. You're a savvy buyer. I'm working on the 61 Fleer set. The RW&B theme is appealing and player selection superb.

I'm living vicariously through all the blog posts about this year's National. It's the first one I've missed since 2010.