Do not go gentle into that good night 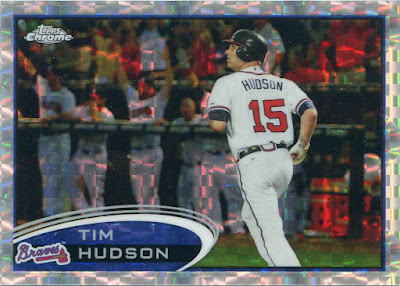 Okay, so maybe that post title is a little overdramatic.

But the fact of the matter is that one of the blogosphere's longtime greats has decided to hang 'em up for good. I'm talking, of course, about Jim of the recently retired "Garvey Cey Russell Lopes" blog.

I've seen a lot of blogs close up shop during my time here, but Jim's decision hit me hard. His was among the first baseball card blogs I stumbled upon back in the day, and it was partially his work that caused me to take the plunge into starting this little blog of my own.

I also think I've learned more about baseball and baseball cards from the posts on "GCRL" than any other blog out there. Jim's posts on Final Tributes inspired me to start my sunset theme, and his massive "turning two" project was one-hundred-percent the reason I started dabbling in double play cards.

Without Jim, my collection wouldn't look the way it does now, and that's no exaggeration. 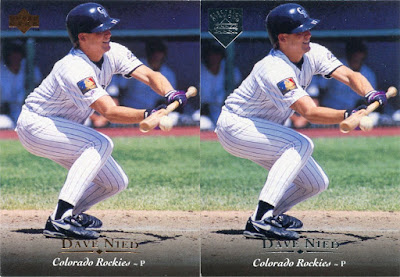 If there is a light at the end of the tunnel, it's that Jim will continue to collect and trade with us bloggers even after his retirement.

That's certainly a relief to hear, because, as I've learned during our numerous swaps during my time here, the man puts together some of the best trade packages around. Whenever I see a mailer from Jim waiting in the mailbox, I know I'm about to drown in a heap of great cardboard.

As usual, he went to work on my mini-collections, starting things off with an X-Fractor parallel of one of the greatest cards of this decade with the Hudson. Also getting in on the "pitcher at the plate" fun was this pair of "seeing double" Dave Nieds. (One is the base card, the other an Electric Diamond parallel.)

Now that's how you lay down a bunt. 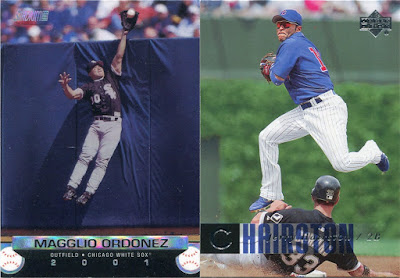 The Ordonez is a terrific new "at the wall" find, and, knowing Jim's roots, I guess I shouldn't be surprised that a handful of new double dips fell out of this package.

My favorite of the turning twos had to be that Jerry Hairston Jr. crosstown double play at Wrigley. 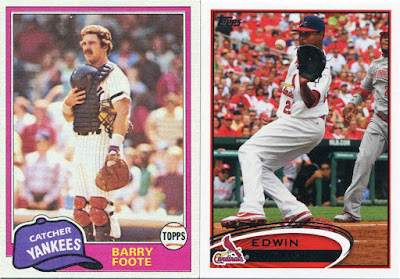 A couple for the "anthemic" and "play at the plate" archives here.

The Foote, now that I think of it, has to be one of the oldest anthem cards ever printed, and the Thank-God-he's-no-longer-a-Cub Edwin Jackson is a rare pitcher-centric PATP. 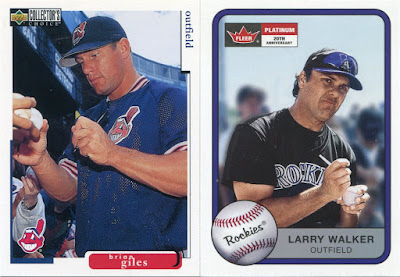 Admittedly, I've never been much of an autograph hunter in real life.

I don't have the personality, patience, or, really, passion to try and approach ballplayers on the rare occasion that I attend a baseball game.

But I appreciate those select fans that do, if for no other reason than the fact that there wouldn't be shots like these on baseball cards. 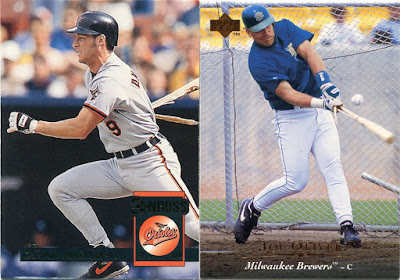 New broken bat cards can be tough to come by, but Jim hunted down a pair of new ones here.

Come on, Joe Oliver. Breaking your bat in batting practice? 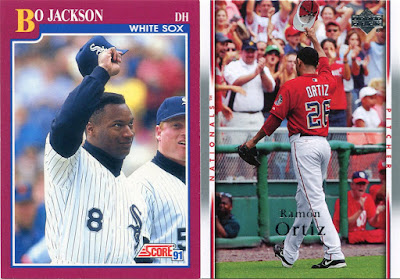 Jim capped off the mini-collection craziness with a couple tips of the cap (or is it tip of the caps?).

Every single one of these types of cards are pure gold, which leaves me wondering why I didn't start chasing this theme sooner. 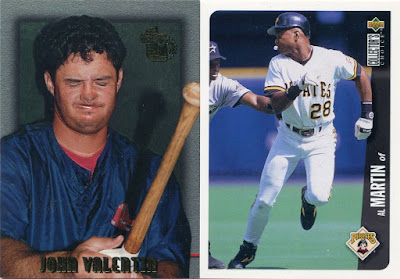 Jim, like so many of my other frequent traders, has a penchant for finding the flat-out odd in this hobby.

Case in point: Al Martin blowing a bubble while getting tagged on the rumpus in a rundown, and John Valentin's reaction to having eaten gas station tacos for the first time.

If a photo like that Valentin can make it into a Topps-branded set (Topps Embossed), then, hey...maybe I really can become a baseball card photographer one day. 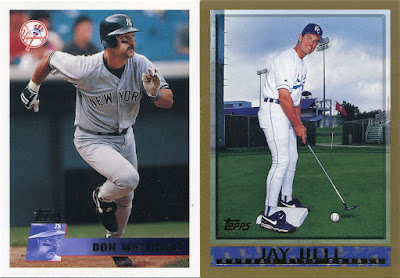 That Jay Bell satisfies a bit of self-loathing on my part, as I had that card during my younger collecting days, but, for whatever reason, traded it away.

The Mattingly fills a big gap in my sunset collection. Donnie Baseball's '96 Topps issue is a true finale, as it features his entire career stats on the back.

It's fitting that a Final Tribute aficionado like Jim would be the one to send it to me. 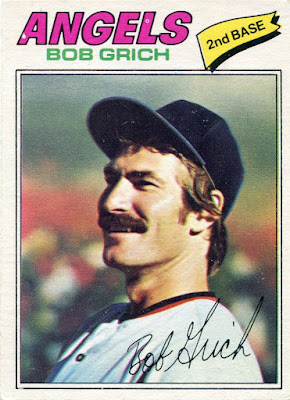 Jim used to run a blog that was all O-Pee-Chee, all the time.

It closed up shop a few years ago, and I wasn't as big into OPC then as I am now. I still read the blog daily during its heyday, and, even today, I still try and catch up with some of the older posts that I never caught at the time.

The standard '77 Topps Bobby Grich is so clearly ingrained in the minds of many collectors, mine included. Because of that, the variant image on this '77 OPC version Jim sent over really tripped me out.

I just can't get used to it. 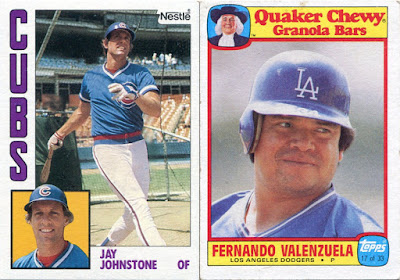 Jim kept the oddballs coming with these two from the Nestle and Quaker archives.

There's something about the sight of Fernando Valenzuela in a batting helmet that just makes me laugh. 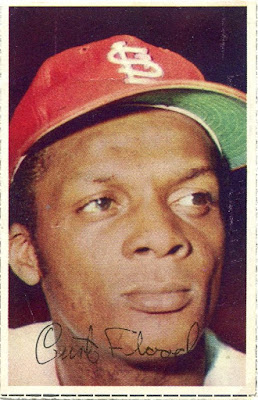 Jim's trade packages are about as well-rounded as they come, but there's always one card that stands out above the rest.

For me, this was that card with this particular batch. I'm not exactly sure what set it hails from, but I do know I've seen other cards like it before.

I've always been a big Curt Flood fan, and this tremendous oddball is a rare addition to my collection of his, a collection I've been working on for a long time now.

Between this package and all the others I've received from Jim over the years, my binders are forever indebted to the great mind behind the blog we know, simply, as GCRL. More than that, though, the entire blogosphere owes a great deal of thanks to the time and effort Jim put into his blog over the years.

All I know is this: Every morning (or afternoon, depending on how lazy I decided to be that day), after I'd wake up and start scanning my blogroll, there'd be a post on "Garvey Cey Russell Lopes" waiting for me.

For a split second I was worried he stopped collecting because I've had a package in the works for him for eons. Looks like I won't have to reluctantly give those Dodgers to NO or the other LAD fans now.

And nice Barry Foote :). Love the look on Walker's face as he signs too.

Moms blog was also one of the first I came across. The Flood is a 71 Dell stamp

I'm with you on the early morning GCRL posts. Always there, like a morning newspaper. You read some more closely than others, but you always read it.

I definitely miss that from my mornings.

Wait. GCRL is retired? This day has been full of bad news. Off to say goodbye on his blog, but before I do... cool Curt Flood oddball.

Very nice package all around. Going to have to find me ones of those Oliver's.

"Dimebox" Nick seem capable of carrying the working-class card collecting blog torch into the next generation.

hey nick (and everyone else) - thanks for the kind words. looking forward to many more trades!

and, i will rage against the dying of the light!