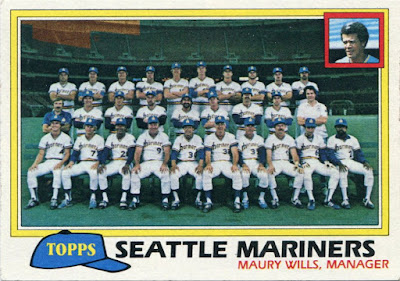 Well, my preseason pick of a Mariners-Nationals World Series isn't looking so good.

The Nats still have a decent chance of making the postseason, but the M's are currently 54-61, good for fourth place in the AL West. I'm usually terrible with predictions, and that trend continued into 2015, it seems.

Still, the Mariners have been in the news lately thanks to Hisashi Iwakuma's no-no against the Orioles yesterday, and I guess it's serendipitous that the M's are the next team up in the Short Term Stops rotation on this blog.

I don't include managers in these posts, but the Mariners might have the best Short Term Stops skipper nominee ever in Maury Wills. I've talked at length about it before, but his one-year stint at the helm in Seattle involved once writing out a lineup card with two third baseman and no center fielder. 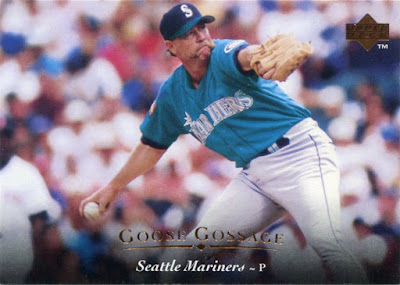 I've already gone on a trek through Goose's sunset cards, and the sight of him in those teal-ish Mariners '90s jerseys is almost blasphemous.

Gossage posted a 4.18 ERA and one save (the last of his 310 career saves) during his lone year in Seattle. And, in what will become somewhat of a running theme through this post, his career began before the Mariners even existed.

Goose made his debut with the White Sox in 1972, while the Mariners didn't become a big-league franchise until 1977. 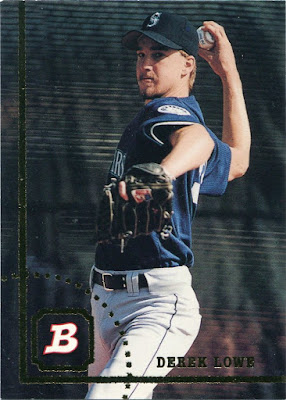 The sight of Derek Lowe as a Mariner probably leaves a sour taste in the mouths Seattle fans.

After just 12 games with the franchise (in which he went 2-4 with a 6.96 ERA), Lowe was dealt to the Red Sox in the infamous Lowe-and-Jason Varitek-for-Heatlcliff Slocumb swap.

In hindsight, that has to go down as one of the most lopsided trades in history. 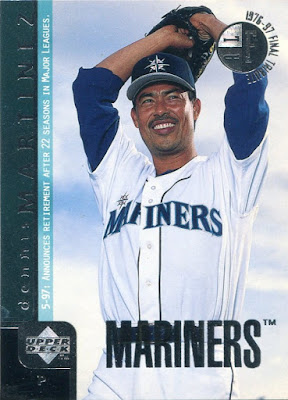 Like Gossage, the career of Dennis Martinez began before the Mariners existed.

Denny made his debut with the Orioles in 1976, the year before the M's would become an expansion franchise. Twenty years later, he became a Mariner, going 1-5 with a miserable 7.71 ERA in just nine games with the club.

Martinez's 1998 UD issue acknowledges the fact that he'd announced his retirement after 22 years in the bigs, and even rewards him with a hallowed Final Tribute stamp. Denny, however, decided to pull a Brett Favre and came out of retirement to pitch one final season with the Braves in '98.

It's the sunset card that wasn't. 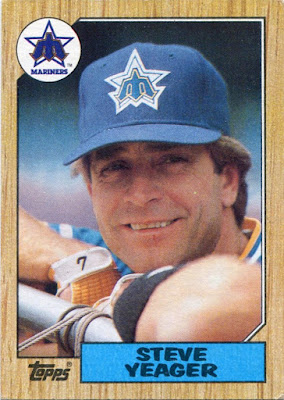 After fourteen years in the Dodger blue, Steve Yeager wound things up in Seattle blue, hitting just .208 in 50 games with the '86 Mariners, the final season of his big league career. (Unless you count his appearance in Major League.)

Yeager also made his debut before the Mariners existed, coming up with the Dodgers in 1972. 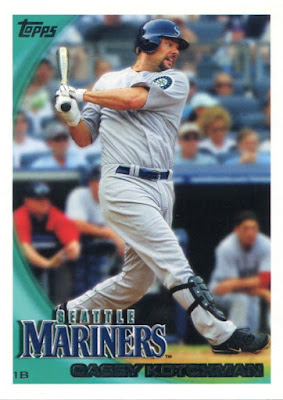 I'll admit that the Mariners don't have the strongest Short Term Stops infield, but here goes.

My man Casey Kotchman was a short-lived Mariner in 2010, hitting just .217 with nine homers in 125 games. Even I, a longtime fan of his, thought he was all but done as a major leaguer. He'd fallen off the face of the baseball earth.

But then Kotchman came out and hit .306 with the Rays the very next season, and the man was back in business (albeit briefly). 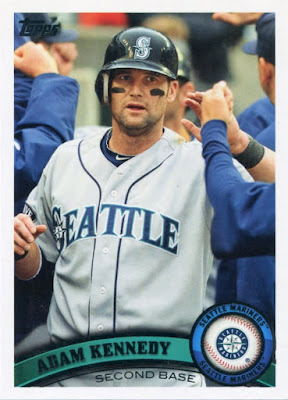 Adam Kennedy's solid 14-year big league career was winding down by the time he latched on with the 2011 Mariners, hitting just .234 in 114 contests with the club.

He'd ride out into the sunset with the Dodgers the following season. 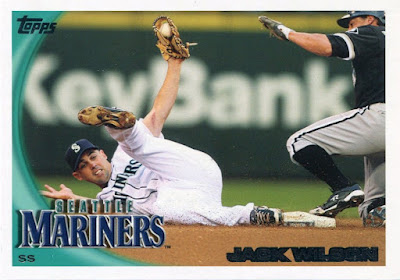 Jack Wilson's tenure in Seattle wasn't as short as most of the other guys on this roster, but it was definitely unfamiliar.

Wilson is ingrained in my memory as a Pirate, so seeing him as a Mariner throws me off a bit. He played in one full season (2010) and parts of two others with the M's, hitting just .243 in 154 total games in Seattle.

If nothing else, he got this oddly fantastic 2010 Topps card out of the deal. 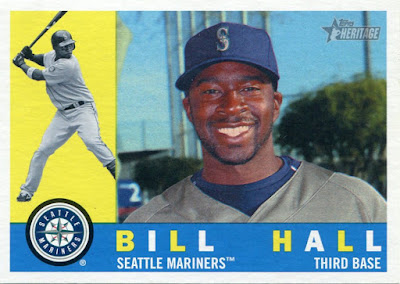 Do not ask me why Bill Hall is in my binders, because I won't have a good answer for you.

It surprised me to learn that Hall had a 35-home-run season with the Brewers in 2006 and managed to stick around as a part-time player in the bigs until 2012. He split 2009 between Milwaukee and Seattle, and hit .200 with two homers for the Mariners in 34 games.

That's all I have to say about Bill Hall, but, in other news...Heritage High Numbers will be back in pack form in 2015! 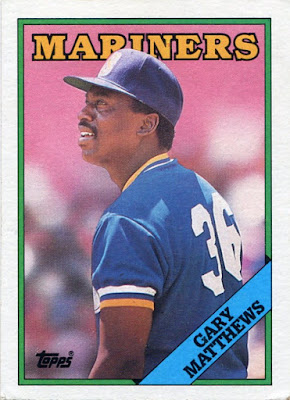 Gary Matthews is yet another guy to have been a big leaguer before the Mariners came into existence, as he came up with the Giants in 1972.

Fifteen years later, "Sarge" wrapped up his career in Seattle, splitting his final season between the Cubs and Mariners. Matthews hit .235 with three homers and fifteen RBIs in 45 games with the M's.

Until I was researching for this post last night, I was under the impression that this was the only card of "Sarge" as a Mariner. Imagine my surprise when I stumbled upon his '88 Score sunset issue.

Into the Just Commons cart it goes... 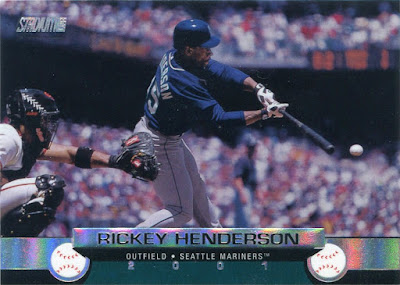 Rickey famously jumped around in the later stages of his career, and the Mariner blue was one of the many unfamiliar uniforms he wore during his twilight years.

Rickey just missed out on joining the likes of Goose and Sarge as one of the pre-Mariner Mariners. Henderson debuted with the A's in 1979, just two years after the M's came into existence. 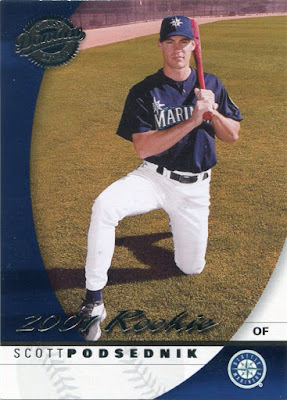 The infield may be weak, but the Mariners Short Term Stops outfield is stacked.

Sarge and Rickey were no-brainers for me, and the third and final outfield spot took a lot of consideration on my part. In the end, I went with Scott Podsednik, in no small part because he's one of my all-time favorite big leaguers. (I admit it, I play favorites.)

Pods was basically a non-prospect when he came up for a cup of coffee with the 2001 Mariners. He'd toiled in the minors for a few different clubs since he was drafted in 1994, and wound up hitting just .194 with zero stolen bases in 19 games with the M's between 2001 and '02.

Milwaukee claimed him off waivers in October of 2002, and the then-27-year-old rookie came out of nowhere to hit .314 and swipe 40 bags with the 2003 Brewers, good for second place in the NL Rookie of the Year voting that season.

He went on to enjoy a very fruitful 11-year big league career, including, most importantly, his vital role with the 2005 White Sox championship club. 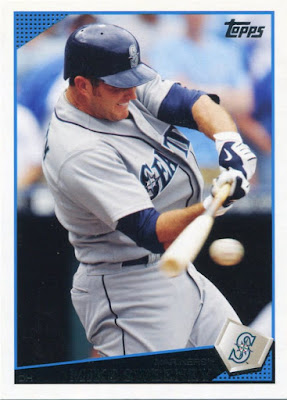 In my head, Mike Sweeney is a career Royal.

In reality, not so much. Sweeney became one of the most underrated players of my generation in Kansas City, but, like so many others, jumped from one club to another as his career was winding down. He played for the A's, Mariners, and Phillies during the final three years of his career. (He made the A's Short Term Stops roster, and I don't think any cards were produced of him as a Phillie.)

Still, the guy looks plain wrong in anything other than a Royals jersey.

That just about does it for this edition of Short Term Stops. We'll be looking at the Marlins roster next time.

I actually started getting into baseball when Jack Wilson was still a Mariner so to me he's a Pirate AND a Mariner. I have vague memories of Jack Wilson the Atlanta Brave too.

This is one of the oddest Short-term Stops teams you've done... No future HOF pitcher who made 2 starts at the end of his career... No big-name outfielder who appeared in a handful of games before getting released... it's like the Mariners haven't even been TRYING.

This is great! I need to go back now and read all of the past ones you've done. Can't wait until you do one for the Reds.