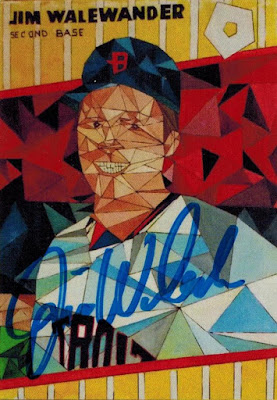 Here's the story of how a seemingly insignificant decision I made a couple years ago had a gloriously rippling effect on my entire collection.
A refresher for anyone who missed the first thousand times I've mentioned this on the blog: I've been fascinated by Jim Walewander, a one-time Tigers cult hero, for a long time now, mostly because of his well-known fandom of The Dead Milkmen (the only band I've seen live more than once). But only recently did I learn that Walewander is actually from my hometown, and went to the same high school as my mom.
And the only reason I found out Walewander hails from my tiny suburb is because I decided to flip over a random minor league single of his I plucked from a dime box on a whim. 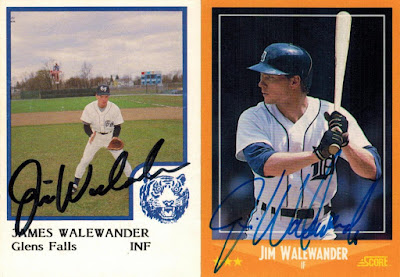 I could've easily gone the rest of my life knowing Jim Walewander only as "The Dead Milkmen Guy," and not having a clue about his hometown ties.
I also could've gone the rest of my life thinking I was the only person in the card world who cared in the slightest about Jim Walewander...at least, until I saw a guest post pop up on Gavin's blog late last year, written by a blog-friend of Gavin's named Alex whose Walewander fandom completely blew mine away. The post detailed a fantastic TTM project Alex set up with Walewander himself -- in addition to a few standard autographs, Walewander inscribed the full lyrics to a Milkmen song called "Dean's Dream" (one of my personal favorites) across a series of his playing-day cards.
I commented on Alex's post detailing my own Walewander fandom, and I thought that would be that. 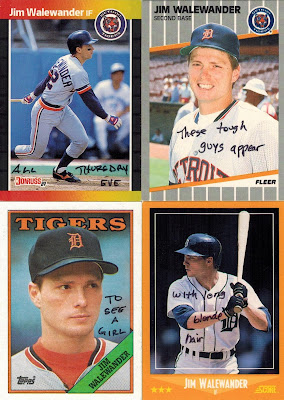 But Alex didn't let that happen -- because a few days later, I got an email from him, saying he'd read and knew about my Walewander post, and had me partially in mind as the gears to this project were turning.
Turns out Alex set aside a few of Walewander's TTM autographs for me (including the custom at the top of this post), and even further than that, had a few spares of the lyric-inscribed cards he was willing to send me. There's a strange line in "Dean's Dream" that goes These tough guys appear... and it's always been a favorite lyric for reasons I can't quite explain, so I was ecstatic to hear Alex had a spare one of those Walewanders available.
The simple fact that Jim Walewander took the time and care to do something like this is incredible on its own -- and given the personal ties (not to mention the homage to one of my favorite bands), I can say with 100 percent truth that these cards are completely unlike anything else in my collection. 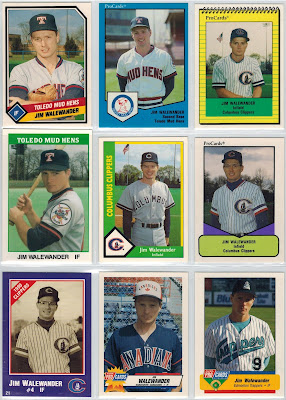 Safe to say my card collection already owed Alex a major debt.
But Alex decided to take things about a million times further and send me almost every minor league card ever issued of Jim Walewander! Before this, my Walewander collection before this consisted of his handful of overproduction-era big-league singles, with a couple random minor league cards sprinkled in. Now in the blink of an eye I had a formidable Walewander collection, almost doubled in size thanks to a buffet of obscure oddballs covering his early Tigers days to his later organization-depth years in the Marlins' and Angels' systems.
It's hard to explain just how thankful I am here, because there's a very good chance I would've gone the rest of my life without owning any of these cards, so let's all give a great round of applause to Alex and... 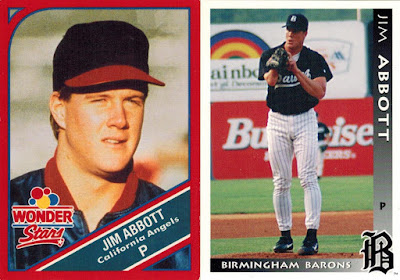 Hold on -- I'm being told this post isn't over yet, because for some reason Alex decided to stash more stuff away for me.
In addition to an excellent bread-loaf oddball came a never-before-seen minor league single from Jim Abbott's comeback attempt with the White Sox -- significant because Abbott went straight to the majors after being drafted in 1989, and didn't play in the minors until said comeback attempt. 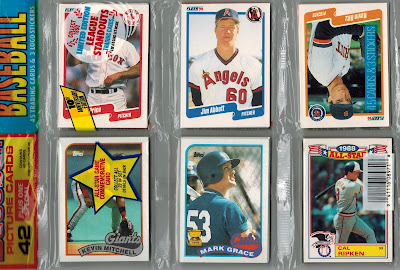 And how about a couple thirtysomething-year-old rack packs showcasing two of my favorite dudes front and center?!
(But yes, I opened these, because I just can't keep unopened stuff lying around -- not even 1989 Topps or 1990 Fleer.) 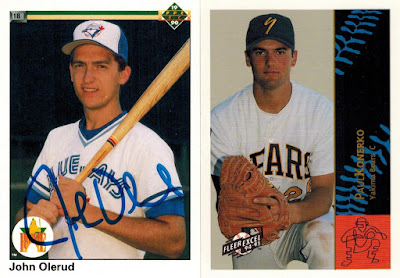 Alex and I have swapped many emails over the past few months, and he's regaled me with a whole lot of fantastic stories of both baseball and baseball cards alike.
Also, if you haven't figured it out already, he's a big fan of TTM autographs and minor league cards. 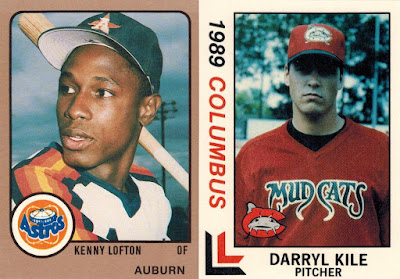 Alex even sent me a couple complete minor league sets, just because they included rare early glimpses of a couple of my bigger player collection projects. 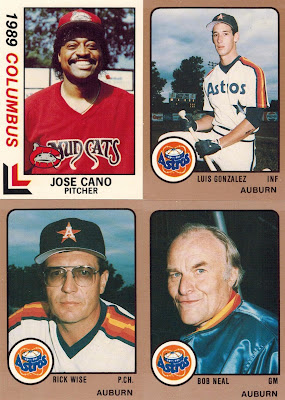 The Lofton and Kile were obviously the main draws, but they weren't the only jewels hiding in those minor league sets.
(I included GM Bob Neal here because he looks like the villain in a children's novel.) 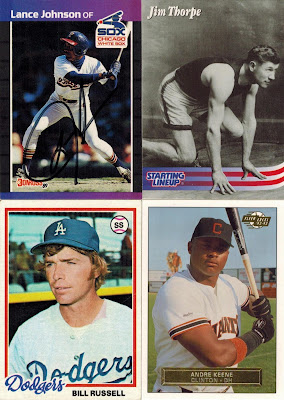 It got to the point where I almost couldn't believe one person was sending me all this top-flight cardboard.
Included in the mania was a TTM of another semi-local guy with Lance Johnson (he attended a community college not far from where I live), a Starting Lineup Jim Thorpe oddball (probably the only track-and-field card I'd ever get excited about), and a '78 Topps Bill Russell (a former Dime Box Dozen need!).
And without Alex, I wouldn't have known who Andre Keene was, or more specifically, I wouldn't have known I knew who Andre Keene was -- he plays a bit part as a hulking White Sox slugger in Major League II. 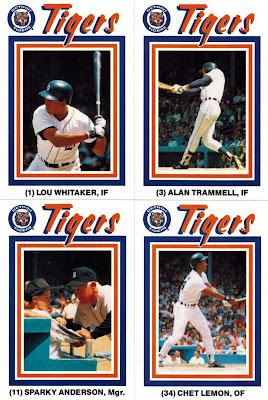 Alex also sent me a complete 1988 Tigers Pepsi set, because while it features all the notable Tigers of the era like Sparky and Sweet Lou Whitaker... 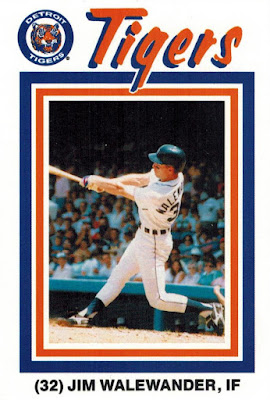 ...the real jewel is the presence of, you guessed it, one Jim Walewander.
And if you can believe it, everything I've just talked about is only Part 1 of the saga I'm calling Why I'll Forever Be In Debt To Alex. 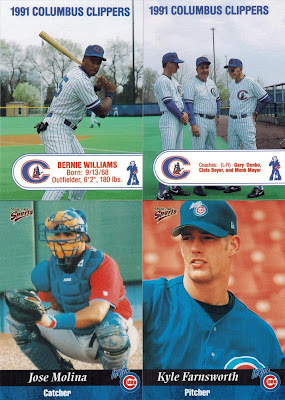 Part 2 begins with something that quickly became obvious in my emails with Alex -- he knows a lot more about minor league cards than I do.
To me, minor league singles have always seemed like rare delicacies, sparsely savored or seen. Alex's showed me that isn't really true -- minor league cards are still produced in fairly large quantities, and can sometimes be sitting right in front of your face if you're looking hard enough. His travels have put him in contact with a few of the bigger minor-league card dealers in the hobby, and he was nice enough to pass some of their info to me, and act as a go-between in a couple cases.
I thought long and hard when Alex asked me if there were any particular minor league sets I'd been holding out for, and these two were near the top of my list, though none of these cool cards were the reason why. 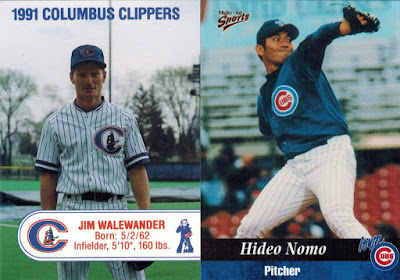 That Columbus Clippers set had yet another Walewander I needed, among the few Alex didn't have a spare copy of, but one I was able to get at a ridiculously fair price thanks to Alex's card-dealer ties.
The other set I had my eye on was the 1999 Multi-Ad Iowa Cubs team set, for the pure and simple fact that it features the only card I know of documenting Hideo Nomo's brief three-game(!) tenure in the Cubs' system that seems like something out of an alternate universe. 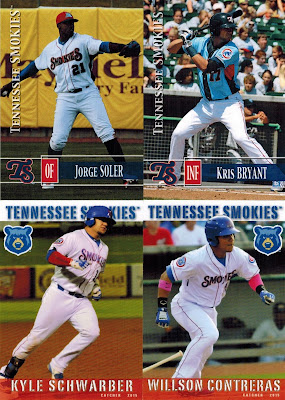 I also grabbed a few recent Cubs minor league sets from Alex's dealer buddies, since good number of the guys in here eventually wound up being part of the 2016 team that I seem to recall did something special. 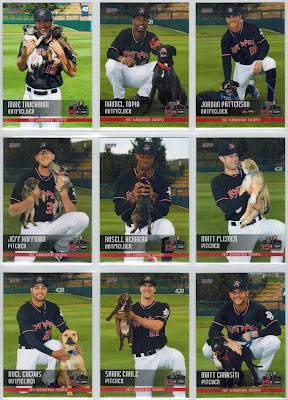 Some minor league sets make everything on the major-league level look bland by comparison -- like the time the Albuquerque Isotopes had every guy on their roster pose with very good doggies.
This isn't even the only time the Isotopes have done this -- but there's a very specific reason why I wanted the 2017 set above the others. 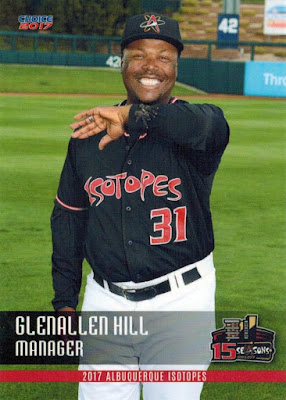 Yes, that's Glenallen Hill posing for a baseball card with...a tarantula!
There's a bit of an in-joke here -- Hill (in)famously once wound up on the DL after sleep-running through a glass table during a nightmare about, you guessed it, tarantulas. Points to him for conquering his fears, and better yet, allowing that magic moment to be displayed for all to see on a baseball card.
(Even more points to him because god knows I'd never let a tarantula walk on my arm.) 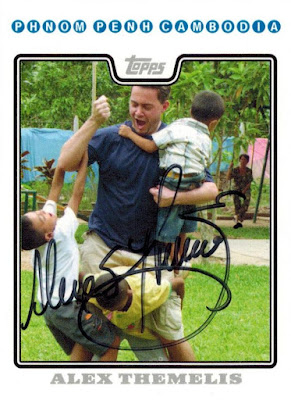 So that's the story of how one innocent little dime box find set my collection on a whole new path of Dead Milkmen fans and hometown heroes, minor league treasures and great big tarantulas -- and, most of all, how it put me in contact with a great, great person in the process.
I have nothing more to say than the obvious: THANK YOU, ALEX!
Posted by Nick at 5:30 PM

Now we know the rest of the story, lol.

Man..I thought the Dean's Dream and guys n' dogs cards were somethin' ... but a TARANTULA!?

That is an insanely generous gift! Alex really makes a good first impression eh? Also, if you're not doing anything with the rest of that 1999 Iowa set, there are a couple cards in there I'd be willing to trade ya for. Granted, I don't have any awesome Walewander content to offer, but I can try to match Alex's generosity!

That's a phenomenal package from Alex!

I collect a lot of obscure players, but I would love to be as passionate about one of those collections as you are about Jim Walewander.

Shoot... I fat-fingered that last comment... THat was me wishing I could be as passionate about one of my collections

Very very cool stuff. The generosity and creativity behind those TTM's are definitely next level stuff. Okay... gotta get a closer look at some of those Isotopes and see if any of those players are holding a Berner.

Lots of great cards there! A good friend of mine from high school was a big Dread Milkmen fan, and your post reminded me of sitting in his room listening to their albums.

I too was on the receiving end of Alex's generosity, and can also attest to his just overall awesomeness.

That glenallen hill card would fit in my "42" mini collection. I might have to find a copy for myself - thanks for sharing!

Those Isotopes cards are awesome! Certainly on par with the Milk Bone set for dog (and spider) lovers!

I have a post queued up regarding my Walewander from Alex and another special card. Wow! Did he ever hook you up!! Great to see these cards in the hands of an appreciative fan! I love mine but it's enough for me. I may have to hunt down a set of the Isotopes Pups though.