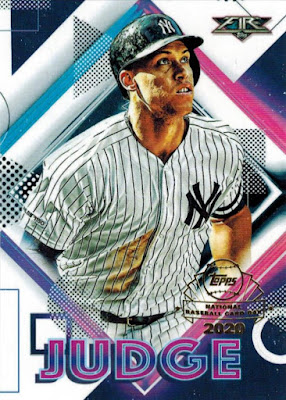 One of the questions I've never heard in the constant save some for the kids! howl against retail flippers is whether any of us should want to be buying the cards that came out in 2020.
Normally, I'd chuckle at the people getting all bent about not being able to find any butt-ugly Prizm or something at Target...if I wasn't a bit guilty of this exact thing myself. Example: aside from a strange five-card preview pack I found in a rack pack of Topps Chrome(?), I still haven't seen any 2020 Topps Fire in the wild -- and to my surprise, I'm a bit aggravated by this. Am I so desperate that I'm getting bummed about not finding any Topps Fire? Come on, Nick.
True, the weird retail boom kinda forced me into developing some good habits this year -- i.e. buying more singles online rather than blowing cash on packs that are 95 percent doubles/discards. It's been at least two months since I've opened a pack of baseball cards, which I can't remember the last time that happened. And as I was creating my annual Sets of the Year list for 2020, I honestly don't think I'd label it as a bad year for cards. More of an inconsistent year than anything else.
A few sets did indeed capture my heart, but as you'll soon see, it was a year filled with a lot of ugliness and general indifference -- but unlike 2020 itself, there were a few pleasant surprises tucked inside, waiting for me. 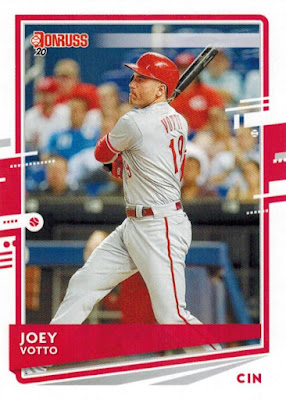 #10 -- Donruss
Aside from the fact that I actually bought a blaster of the stuff earlier this year, Donruss remains a perennial bottom-feeder on my Sets of the Year lists, mostly because it makes everyone look like they're playing in suburban beer-league softball games. 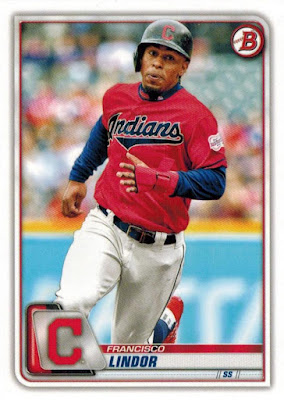 #9 -- Bowman, Bowman Chrome, etc.
I actually liked 2020 Bowman a bit more than the last few years, but even a halfway decent Bowman design isn't gonna get very high on this list. 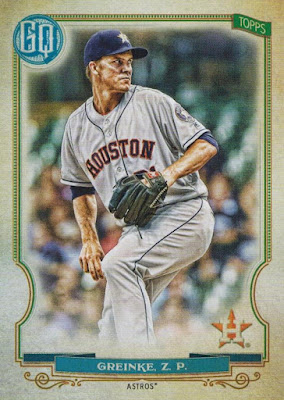 #8 -- Gypsy Queen
As I was in the process of making this list, I found I'd already forgotten what 2020 Gypsy Queen looked like, which should tell you everything you need to know about my feelings here. 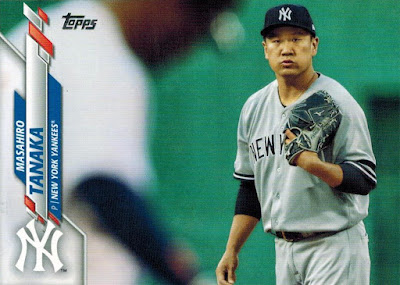 #7 -- Topps Flagship, Opening Day, Chrome, etc.
It's a sad day for Topps -- I don't think a Flagship design has ever finished this low on my Sets of the Year lists in the history of this blog.
If the 2021 Topps previews are any indication, it appears we've lapsed into a Flagship Dark Age where random slashes and sudden angles and general lack of color are en vogue -- basically everything I don't wanna see on a baseball card design. I can't assign any verbiage to 2020 Topps because it just doesn't look like anything. I didn't like it when I opened my first packs last winter, and it hasn't grown on me at all now.
Whether it speaks to me or not, a Flagship design should be memorable, and 2020 Topps is already destined to whimper away into the past -- dull borders, boring photographs, and all. 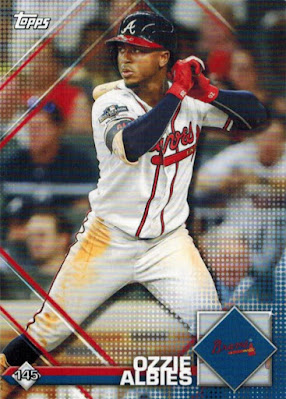 #6 -- Topps Stickers
The only qualifying rule for this list is that I have to have bought enough of a set or otherwise accumulated enough singles to form an opinion on said set -- and for the first time ever, Topps Stickers met those qualifications.
Week in and week out in 2020, I'd walk into the Target card aisle with high expectations. And week in and week out, there'd only be that lonely box of Topps Stickers staring up at me. At some point I caved, and actually took a few packs with me to the checkout line out of sheer desperation.
But get this: I discovered these sticker things...are actually kinda cool. Seeing different players featured on the fronts and backs is a bit jarring -- some are featured front-side first in my binders, others back-side, which is weird -- but overall there's a good amount of color and general intrigue here that's missing from most Topps sets these days.
That first handful of packs of Topps Stickers wasn't my last in 2020 -- and maybe there was a silver lining to all that pack-hoarder madness after all. 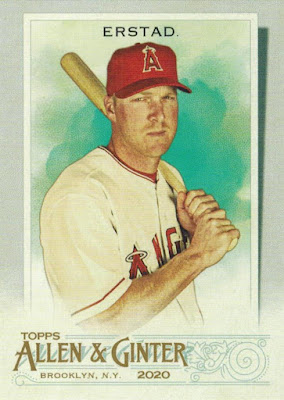 #5 -- Allen & Ginter
I don't have much to say about A&G other than I pulled a Darin Erstad out of a pack of 2020 baseball cards, and I'm still not totally sure how to process that. 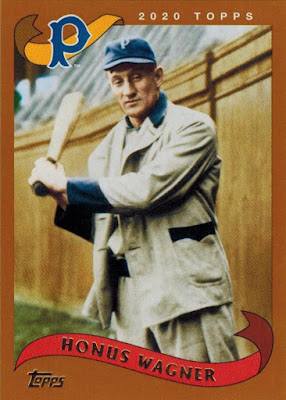 #4 -- Archives
Topps Archives had reams and reams of creative flubs and general inattentiveness strewn across its checklist...and it still managed to come in at #4 on this list.
That should give you an indication of how 2020 was for cards. It's still weird to say that my favorite part of 2020 Archives was the 2002 Topps subset, given that, in reality, 2002 Topps doesn't light a candle to the other two designs featured this year (1955, 1974). But the others were so boring and/or ill-executed that the '02 Topps cards, which do indeed look a good deal like the originals, ended up shining through by default.
I never thought I'd say this, but honoring 2002 Topps, of all sets, turned out to be the lone saving grace for 2020 Archives. 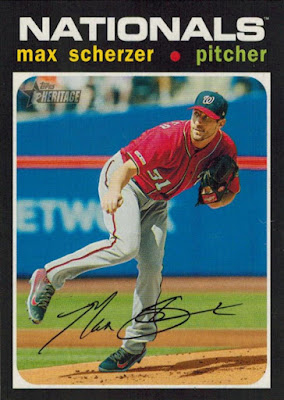 #3 -- Heritage
As far as I'm concerned, baseball card sets in 2020 were basically narrowed down to The Big Three.
Heritage is the third of the three-headed monster, and a turning point in its rundown of the Topps saga. For one thing, it ended a string of vintage Topps designs (1966-70) I'm not all that wild about. And it's the starting point of a long stretch of '70s designs I desperately love. So 2020 Heritage had a lot going for it before I even opened a single pack of the stuff.
But the set itself was darn good, deserving recognition for more than its simple placement in the Topps canon. I thought these stayed quite true to the actual '71s, which is my main point of judgment for Heritage. A lanky action shot like this Scherzer would be right at home in '71 Topps. Just a beautiful example of how striking Heritage can be.
It's further fuel for what I so much want to believe -- that the people at Topps actually know and treasure the long history of the company they work for. 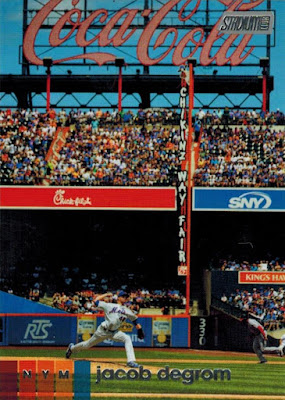 #2 -- Stadium Club
Oh my lord, it actually happened.
Ever since its rebirth in 2014, Stadium Club has been the perennial #1 on my Sets of the Year list, and most of the time it hasn't been particularly close. But not in 2020. This isn't Stadium Club's fault -- it was still its usual fantastic, often jaw-dropping self, letting baseball's photography do the talking, and once again reminding me how fun collecting baseball cards can be.
But I have to be honest here, and admit to myself that Stadium Club just wasn't the best set we saw in 2020, which believe me was no easy feat. 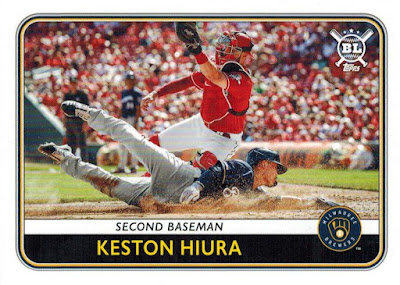 #1 -- Big League
This is the culmination of a love affair that's been brewing for a long time now.
Big League grabbed me when it first came out in 2018, very nearly toppled Stadium Club last year, and finally, after a long-fought battle, knocked the king off its perch here in 2020. As hard as it was to break Stadium Club's dynasty, I know in my heart of hearts this is the right decision, because in a year of so much turmoil and general meh, Big League was 2020's Set of the Year, plain and simple.
I said it when it came out, and I'll say it again: Big League might well have saved modern baseball cards for me. I was never in danger of completely shunning current cards and sets, but I was in danger of becoming hopelessly jaded towards it all, what with everything we saw (or didn't see) in card aisles in 2020.
But then Big League came along and reminded me that, yes, Topps can make a set that's designed to be appreciated, and not merely flipped. It's got a quietly awesome design, it's got great photographs, it's got a general feel that still excites me many months after I first saw it. That's a lot of corny clichés to throw at a set, I know, but they're all true. So maybe there's still a light here somewhere.
Yes, friends, Big League, and not Stadium Club, is my Set of the Year for 2020 -- that thud you just heard was Goliath falling.
Posted by Nick at 5:30 PM

I agree with your #1..everything about Big League yells "classic"!

And may Topps never use sideways graphics again...

Hot damn! It feels like it's been a long time since I agreed with anybody on a "set of the year" pick.

For me, this year was Big League, Heritage, a bit of the Stickers, and everything after that is "meh". Well, I should be fair about Bowman, I still don't have enough 2020 Bowman to fill a 9-pocket sheet. Thanks, flippers.

Too many ho cards for me.

I DID see Fire. (That sounds weird). It was one of the few packs I found on shelves post-June. I've still never opened 2020 Stadium Club or Archives.

I haven't done one of these set "best-ofs" for a long time, but if I were, I'd probably put Heritage at the top because it has become that set that reminds me of normal days, when cards were on the shelves every time you went there.

I really liked 2020 Big League... and it'd be my #2 set. But Stadium Club was my favorite this year. In fact it might be my favorite SC issue in years. I won't even bother picking #3... because the gap between Big League and them is huge.

I've built all three master sets of Big League. This year was the toughest because trying to find product in the wild was akin to locating a needle in a haystack. Thank goodness for bloggers and Sportlots or I never would have finished the set.
Like you, I feel this year was very top heavy. Too much shoddiness and not enough attention to detail in much of what was offered in 2020. SC and BL are a solid one two punch and they are 1A and 1B for me in my rankings. BL wins out though because of the price point and the factoids on the back.

Total agreement here regarding Big League and Stadium Club. I seem to be one of the few who mostly likes Flagship although it seems like Topps only took advantage of the design in Series 1 and got increasingly lazy as the year went on.

I agree 100%. Big League is like '90s Collector's choice mated with 80's Topps. Love the clean baseball card-y design and the offbeat photo choices. They're actually fun. Imagine that.

Great top 3,never cared for Gypsy Queen and I would never include Donruss in any top 10 list as long as they show don't show team emblems.

Due to budget and time constraints, I only buy and collect two of the above 10 products--either from LCS or at a card show. So the empty retail shelves have no impact on me and I'm a relatively happy camper. Great post!

had a strong feeling about BL before I ever neared your #1 pick. Why is Topps so afraid to use white borders on Flagship? In the least, this design would've given us nice refractors. Glad it was Big League and also uber affordable!

Big League was by far the best set of the year. I always rank flagship Donruss higher than most people on the internet seem too. The designs are strong and they at least get creative and a little fun. If they had logos Donruss would be a top set.