Online card shopping can be fun, too 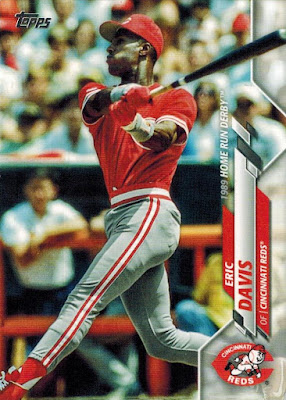 I suppose a part of me has always distrusted the Internet.
I didn't quite grow up with it -- I was already around ten years old or so when my family got an AOL account with all the dial-up tones and screeches. Even then, I rarely used it. I didn't see the need to get my first cell phone until I was a senior in high school, and I was probably one of the last people in my generation to join Facebook, Twitter, etc. I also know and understand almost nothing about technology -- I've never gotten why people would ever choose to "upgrade" their phones every year.
I prefer in-person card shopping over the Internet, too. To me, it just doesn't feel like I've truly bought a card until it's physically in my hands. I can purchase and shovel as many cards into a virtual cart as I want, but you don't get that quick pleasure of actually having those cards until a while later. This is why I circle card show dates on my calendar -- they're unmatched as far as pure, unfiltered baseball card joy goes.
Obviously, all that changed in 2020. 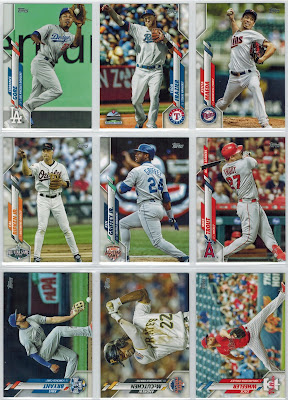 The last card show I was able to attend was almost a year ago now -- which means that the vast majority of my hobby purchases in 2020 took place on the weird wild Internet.
A strange thing's happened since then -- I've actually started noticing that online card shopping edges out card shows in more ways than I ever realized, a fact that's highlighted by an order I received from Card Barrel (aka Just Commons) a couple weeks ago.
Card shows are reliable as far as finding latest-and-greatest stuff, but buying new singles online saves me the slog of digging through stack after stack of cards I don't need in search of the few I actually want -- tracked down most of my 2020 Update wants in record time on Card Barrel. 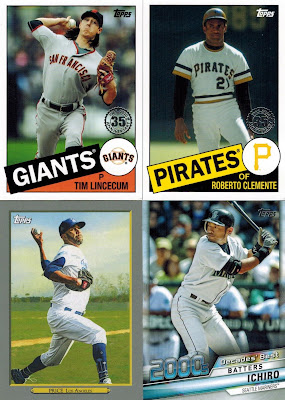 I highly doubt that online card shopping will ever replace card shows in my post-pandemic life (whenever that may be), but in the meantime I'm expecting orders from COMC, the Online Dime Box, Sportlots, and another Card Barrel stack to arrive at some point this week (I swear I didn't plan it that way).
Given that -- and the spoils I'm still filing away from my last Card Barrel order -- it's shaping up to be a fun few days around Dime Boxedonia HQ, and yes, I have the Internet to thank for it. 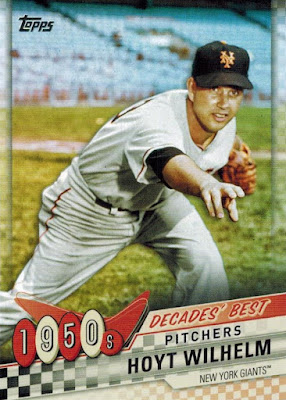 Online card shopping can even help you find Hoyts in 2020 products that somehow passed you by(!). 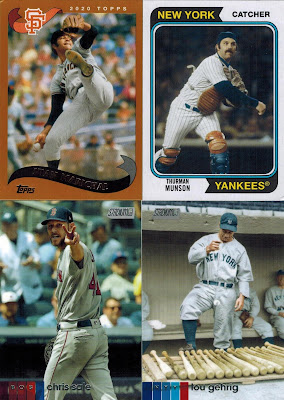 There used to be a time where I'd feel the need to knock out every single base card I needed from every current set as quickly as possible.
I'm more content to let stuff sit on my want list for a while these days, but this order took care of a few I didn't feel like waiting for any longer. 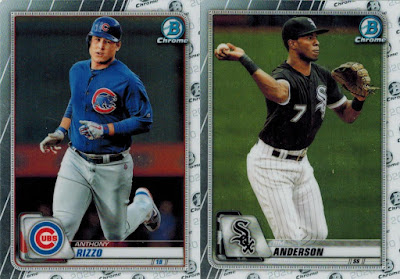 I'm glad Card Barrel had some 2020 Bowman Chrome singles for sale, because god knows I'm not gonna buy it retail (not that I'd be able to find any in the first place). 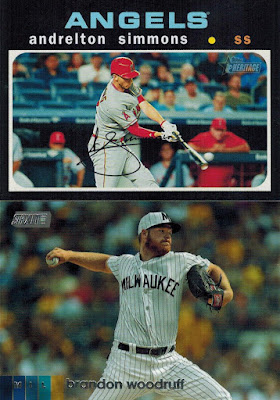 Two prime frankenset contenders here, and I didn't even know they existed until more recently than I'd like to admit. 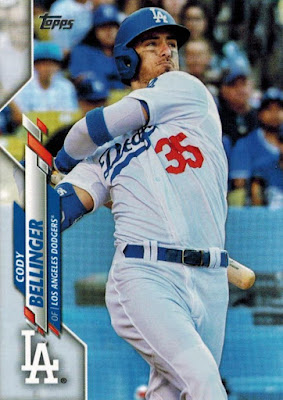 Online card shopping can help you take care of the gremlins, too.
I could've sworn I had this card already -- I thought my 2020 Topps base needs were long extinct, because only inserts remained on my want lists. So you can imagine my surprise when I opened one of my Dodgers binders recently, saw the Opening Day version of this Bellinger...without the standard Flagship card next to it. Oh, the horror! I flipped through page after page, thinking there had been some mistake. But the truth soon became clear: I didn't have it.
A few clicks later, though, and the gremlins had been defeated once again. 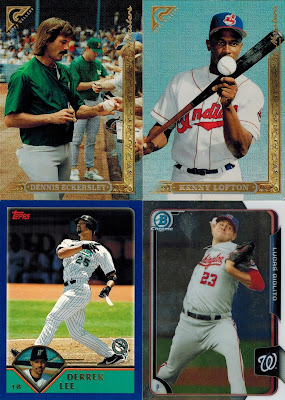 Online card shopping makes player collecting a whole lot easier -- I've never seen a specific "Kenny Lofton" section in a card show dime box or anything.
Mini-collecting, on the other hand, is a bit tougher in the digital world, but it can be done. 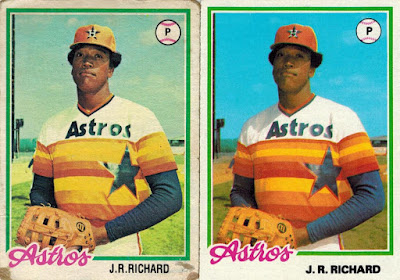 Card Barrel doesn't have the randomness I enjoy out of other Internet sites, but I did manage to find an excellent '78 Burger King JR Richard I needed, which looks a whole lot brighter next to the raggedy regular '78 Topps Richard I've owned since I was a kid. 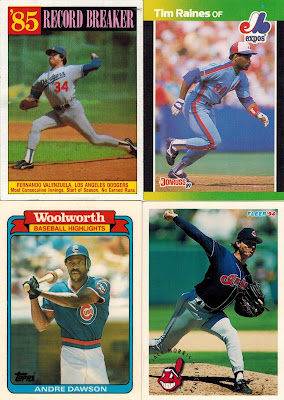 If you've collected long enough, I'm sure you've had the HOW DO I NOT ALREADY HAVE THIS CARD?! feeling many times over.
Happens to me regularly. Fernando Valenzuela is one of my top player collections, but somehow that regular ol' '86 Topps Record Breaker card slipped by me this whole time. Into the Card Barrel cart it went, discreetly mixed in with a few other scattered needs, without anyone being the wiser.
Well...until now, anyways. 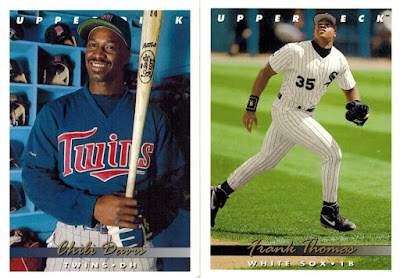 A weird paradox of card collecting: overproduction-era stuff is so common that I almost never see it at card shows.
Granted, I can't imagine people would flock to a table filled with 1990 Donruss, but I honestly wouldn't mind digging through an entire dime box of 1993 Upper Deck or something -- because apparently I still need a few cards from a set I thought I'd already seen ten times over. 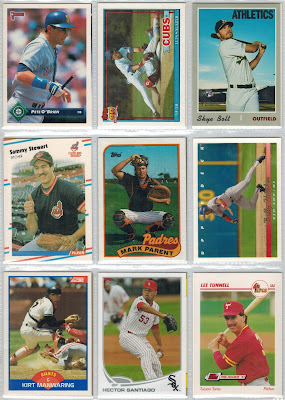 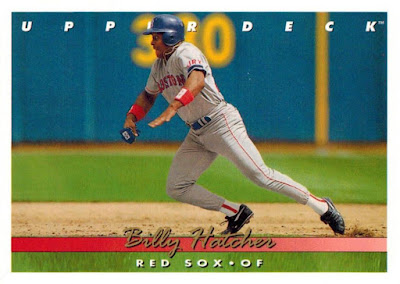 Because up until this order arrived, it featured the lone open slot in my frankenset -- that dastardly #618.
But thanks to the simple trick of plugging the number "618" into a card database, and seeing if any frankenset-worthy cards showed up, the internet helped me accomplish something I've been wanting to say for a long time now: the Second Dime Box Frankenset is now complete!
Makes sense that this fun in-motion card from '93 Upper Deck would finish things off -- '93 UD is a photographic masterpiece, and probably the single largest contributor to my frankenset. I'll still upgrade/change cards as I see fit, of course, but I can sleep a little easier knowing all 666 frankenset slots are finally filled (although now I'm fighting the temptation to start a third frankenset). And okay, I might as well just say this, no matter how begrudgingly -- I have the Internet to thank for it.
I miss card shows as much as any collector would, but if nothing else, the pandemic months have shown be that online card shopping can be just as fun.
Posted by Nick at 5:30 PM

Nice cards! I was thinking the other day that I should place a Card Barrel order; I haven't placed one in about a year and I've acquired very few cards over the past 3-4 months.

That 2020 Topps Archives Thurman Munson just got flagged on my wantlist.

I'm so glad there's outlets for your collecting jones.. that said ,can't wait until we can hit card shows together again ...

And I'm pretty sure I've never seen a card from Woolworth's before!

Those ‘96 Gallery cards are top notch. I wish I would’ve known you needed some stuff from ‘20 Update. I have a ton of dupes from the set, somehow the flippers have been missing them in my area. If you have any more wants from the set, shoot me an email.

I don't see the point of having food issues if they're not putting their logos on the front. I have a Twizzlers Kenny Lofton that I only know is Twizzlers because it said so on Cardbarrel (and the number matches the listing on TCDB). Burger King, Cracker Jack, etc. At least Coca-Cola had the logo on theirs.

I have a bad habit habit of "rushing" to get every thing right now. In fact I just posted the other day about the very thing. I could have saved $5.00 + on those UK, if I had been patient (like 2 minutes patient). They were on Sportlots. I need to exercise more patience.

If I ever decide to build a frankenset... COMC and/or TCDB will become my new best friend as I sift through photos and cards.

unfortunately, digital purchasing of cards has become the norm in 2020 and now early 2021. for newer stuff i'm totally fine with online purchases, it's the vintage stuff that i worry about. another persons valuation of physical appearance may vary quite a bit from mine.

Congrats on completion of the second franken-set, Nick!!!

I blame you for getting me hooked on Card Barrel, lol.

Anyway, that’s a pretty fun batch of cards it looks like. Looking forward to seeing what else you got in those other orders.

Hi. Nick, thank you very much for that Koufax card. What a sweet card. My first real Koufax card. I appreciate you sending me some extra cards as well. 73 topps Duffy is a classic. Keep up the good work on the blog. Thanks agian

Buying online is okay, I guess, but for me will never even come close to buying at shows.