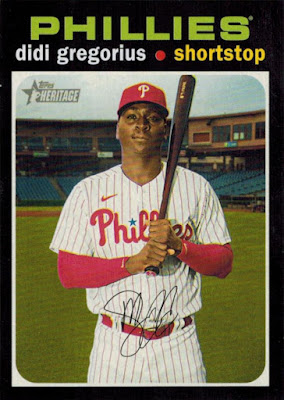 It's no secret that Topps's last few releases of 2020 were, let's just say, rushed.
Update was mostly a last-minute disaster brought upon by the weirdness and uncertainty of the 2020 season. Basically a Monty Python-esque non-sequitur of a baseball card product. Update's insanity has already been well-documented around the blogs. But another set snuck onto the market late in the calendar that, for my money, might well be more absurd than Update: Heritage High Numbers.
From what I can gather, the design and production of HN got so screwed up that it was never even sold in retail stores. In the snap of a finger, a retail staple became a hobby-only product, which means I'd never open any because I haven't bought packs from a card shop in about a decade. Thankfully, I was able to find a Sportlots dealer who had pretty much every base card I needed for a mere 18 cents a pop.
But as I flipped through the cards I bought, I realized High Numbers had so many levels of absurdity that it deserved its own scale -- a scale which I'd like to detail for you here tonight. 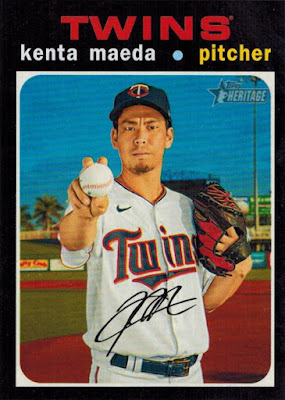 Level 1 -- Kenta Maeda
Heritage High Numbers is basically an old-school version of Topps Update -- its job is to properly address all the transactions and general goings-on from that particular baseball season.
So the inclusion of guys who played for new teams in 2020 (like Kenta Maeda) isn't absurd at all, and gets to the heart of what HN should be. 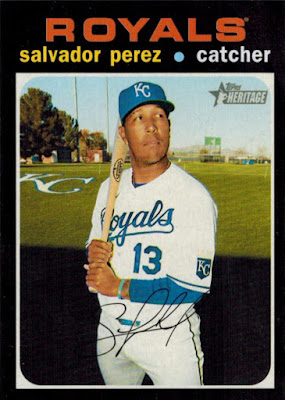 Level 2 -- Salvador Perez
Late-season checklists are chiseled in my head as guys-on-new-teams sets, so I'm a little taken aback when I see guys like Salvador Perez in the same uniform they've always worn.
But while he didn't change teams, Perez is a solid candidate for this set -- he missed all of 2019 due to injury, but came back to play a fair amount in 2020, which makes his appearance in a set of "updates" reasonable. 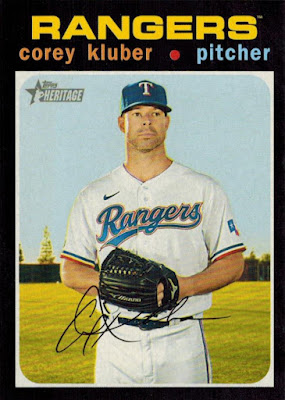 Level 3 -- Corey Kluber
Corey Kluber pitched exactly one inning of baseball in 2020, but I can't really fault Topps for including him in their sets this year since his season was abbreviated due to a shockingly quick injury no one could've seen coming.
This is actually my eighth card of Kluber with the Rangers, and his presence in that binder will always be weird to me given his whopping one-inning stint in the uniform. 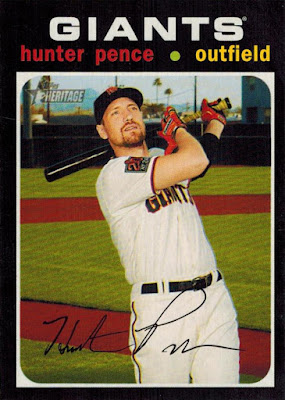 Level 4 -- Hunter Pence
Now we're starting to veer into the truly absurd.
Hunter Pence retired after being released by the Giants shortly into the 2020 season, and probably isn't the most deserving candidate for these end-of-year roundups, but here he is. 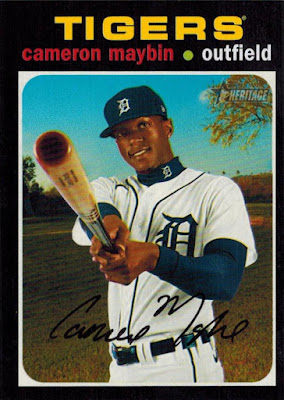 Level 5 -- Cameron Maybin
Keep in mind that, despite their general weirdness, I voluntarily bought all the cards you're seeing in this post -- because my player collections don't listen to those does this card REALLY need to exist? cries of absurdity.
This includes guys like Cameron Maybin who didn't even finish the 2020 season with the team they're pictured with in HN -- the Tigers traded him to the Cubs midway through the year, apparently too late for Topps to get the memo. 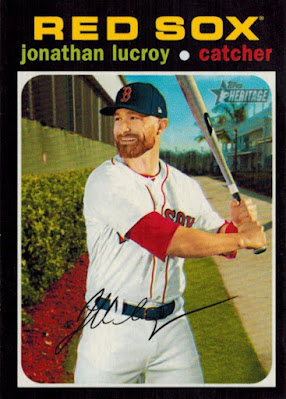 Level 6  -- Jonathan Lucroy
This is one of the strangest HN inclusions to me -- Jonathan Lucroy wasn't expected to be much more than a fringe player (at best) with the Red Sox this year, and he proved it by playing in exactly one game with them in 2020.
Lucroy's entire season consisted of two innings behind the plate, and he never even made a single plate-appearance in Boston, yet he'll always have that lonesome spot in my Red Sox binder. 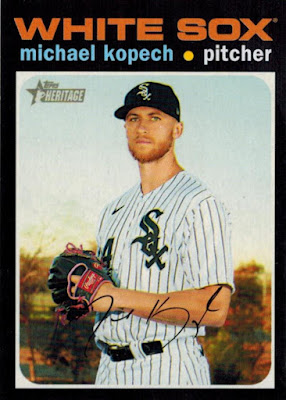 Level 7 -- Michael Kopech
Still, whether it was a full season or a single game, everyone I've shown thus far can at least say they played baseball in 2020 -- a fair amount of dudes who showed up in HN don't even meet that criteria.
White Sox phenom Michael Kopech was still recovering from Tommy John surgery this year, and decided to opt out of the season regardless of whether he was ready to pitch or not -- yet here he is with a late-season "update" card in 2020(?). 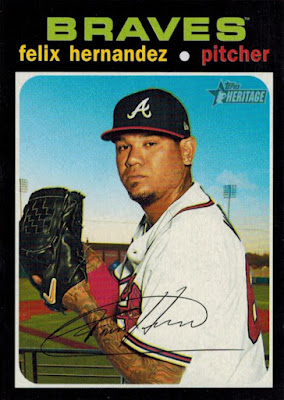 Level 8 -- Felix Hernandez
King Felix was another opt-out candidate -- but what makes his appearance in HN a bit more absurd is that he did so without playing a single inning for the new team he'd signed with for the 2020 season.
So, yes, I already have a few cards of Felix Hernandez in my Braves binder, but there's a very good chance he'll finish his career without that stint ever actually appearing on his stat sheet (also, I don't know what number the Braves were trying to make him wear here, but it sure doesn't look like his famous #34). 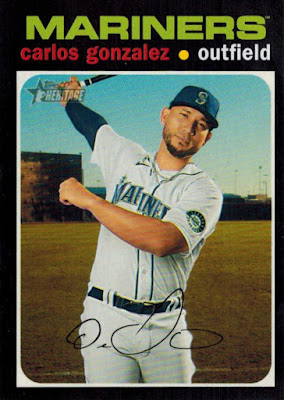 Level 9 -- Carlos Gonzalez
When I first saw the HN checklist, I thought this was the most absurd card of the lot.
I honestly didn't even know that Carlos Gonzalez was ever involved with the Mariners. A quick search explains why: Seattle released him in June, before the 2020 season even started. But for whatever reason, he's got a card with the Mariners in a set that was released a couple weeks ago. Either the final blueprints for HN were turned in a long, long time ago, or someone seriously dropped the ball here.
Yes, I'll always treasure this as a hallowed zero-year card, but I'll also be the first to admit it probably shouldn't have existed in the first place. 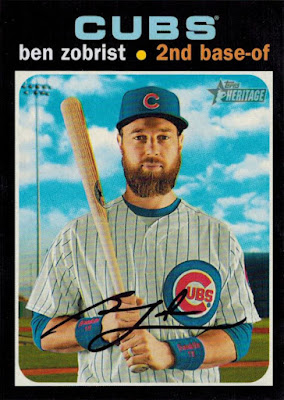 Level 10 -- Ben Zobrist
Upon further review, however, the most absurd member of 2020 High Numbers has to be Ben Zobrist.
Ben Zobrist never signed a professional contract in 2020. He was granted free agency at the end of 2019, and stayed a free agent. I don't think Zobrist ever officially announced his retirement, but his career looks to be just about finished right now. So why in all hell is he getting a card in a 2020 "update" set?! You tell me.
Heritage High Numbers leaves me with so many questions, questions that'll probably always remain unanswered, never solved. An end-of-year set filled with guys who retired, guys who played single innings, and even guys who never played at all. It's puzzling, head-scratching, all the question-mark adjectives.
But now that I think of it, maybe a weird set like High Numbers is exactly what we deserved in 2020 -- an absurd year wrapped up in an equally absurd bow.
Posted by Nick at 5:30 PM

Topps most certainly does not have the true collector in mind when it releases things these days.

Hey, I’m glad they did it. I’ve always believed that cards should be done in yearbook style, probably because they were from 1991-1997, right when I first started collecting. I do, however understand your issue with Heritage High Numbers since it technically a traded/Update set. They do, however get you a lot of sunset/short term stop/zero year cards.
Random question. Have you tried to compile a list of short term stops or zero year cards (even the ones you don’t have)? I’m organizing my binders right now and I’m trying to pull cards like those to send you but I don’t want to miss any.

I somehow missed that High #'s never made it to retail stores. Guess I can stop looking now. :-D

In normal seasons I'm the weird guy who likes Heritage High #'s because they often have unusual player selections. Looks like they outdid themselves this year.

Well, hey, if you ever update the Short Term Stops posts (or make them into a coffee table book, which they're totally worthy of!), Kluber would be great for the Rangers. None of their current nominees can match a one-game wonder who's a two-time Cy Young winner. I do wonder what will happen with King Felix. The guy once seemed Hall-bound, but it's been a few years since he's been decent.

@Mike, Zobrist isn't any kind of zero-year card; he played four seasons with the Cubs. He just wasn't signed for 2020.

Another awesome post. It was well planned and entertaining. Please tell me that Beckett has reached out to you, because these are the kind of articles they should have in their magazines. Great job Nick!

And I'd love to hear Topps respond to the inclusion of Zobrist, Gonzalez, and a few of the other guys on this list.

Lucroy is about to do some landscaping...speaking of which, i need to get cooking on those high numbers. i normally kick start my set with a few retail, but as you mentioned...no dice this year.

I for one am grateful for the Red Sox card of Lucroy, for the sheer absurdity of it! At least Bartolo Colon doesn't make an appearance in the set!

I purchased a hanger box of this stuff at Walmart. I contained three packs with 9 cards per pack. All three packs had the Hobby pack star on the front of the packs.

Another fantastic post, Nick. I actually embrace the absurdity here. I don't know why Pence merited a Giants card and my hero Pablo Sandoval didn't, but I'm glad it's there. I'm sure that when the designs were turned in, the assumption was that guys like Zobrist and Felix Hernandez WERE going to play in 2020....and that people would be happy to have their cards even if they didn't....?

Great read Nick! Heritage High sure seems strange (well everything in 2020 was strange) but I think you did great categorizing all the various quirks.

Does the Zobrist card count as a sunset card? I'm not sure I exactly know the definition of a sunset card off the top of my head.

That CarGo card makes me sad. Not as sad as the first Arenado Cardinal card will make me, but still sad.

Topps did not EVEN try. I mentioned in a comment elsewhere - 2020 killed my love for new cards. 2021 Heritage, which I've highly anticipated for the last few years may not see a dollar from me. I was actually going to bust a whole freakin' case, the first ever for me. Nope. Not now. I'm not ever sure Stadium Club can save my interest in new product.