The anatomy of a zero-year card 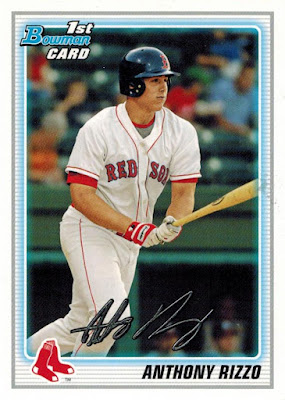 Of the many curiosities in the world of baseball cards, my favorite is, and has always been, zero-year cards.

A refresher: a "zero-year" card is a card of a guy who never actually played for the team they're depicted with on said card. They've fascinated me for as long as I can remember, and I was posting about them by the second day in the life of this little blog. As you probably know, I love unfamiliar uniforms, and these are pretty much the ultimate in that category. And in relation to some of the other stuff I collect -- like double play cards and throwback uniforms -- they're somewhat scarce.

But until a few days ago, I never really studied the different ways and means a zero-year card can come about -- turns out there's quite the laundry list of stories behind these wacky pieces of cardboard. 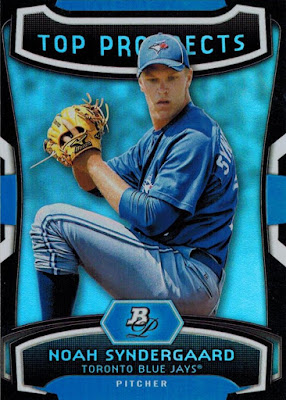 By far the most common way a zero-year card happens is the case of the bigshot rookie who gets traded before ever cracking the roster of the team that drafted and/or developed him.

Of course, sometimes those rookies turn into huge stars, adding a strange twist to their first cards. When someone becomes a franchise staple, like Anthony Rizzo and Noah Syndergaard have, the sight of them in any other jersey tends to get rejected like a bad thought. But like it or not, Rizzo wasn't always a Cub -- he was traded to the Padres (and became a classic Short Term Stop there) in the Adrian Gonzalez deal, and Thor was dealt to the Mets for RA Dickey.

Hindsight looms large in the zero-year universe, and I'm sure both of those teams wouldn't mind having those trades back. 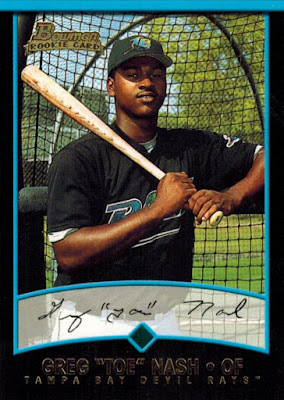 In the grand scheme of things, I suppose zero-year cards aren't that rare -- I think something like 90 percent of minor leaguers never make it to the majors, which means all their cards are technically zero-years.

And since my zero-year collection is mostly limited to "binder guys," I don't really chase cards of those hundreds and hundreds of nameless rookies. But once in a blue moon I get wind of some story that gets me interested in someone, even if that story doesn't end in a big-league stadium. Greg "Toe" Nash is a good example, and I encourage you to read up on him. He basically got discovered playing semipro ball while working in cane fields in the middle of nowhere.

For a variety of reasons -- both personal and physical -- Nash never did make it to the bigs, but his cards still loom large in zero-year lore. 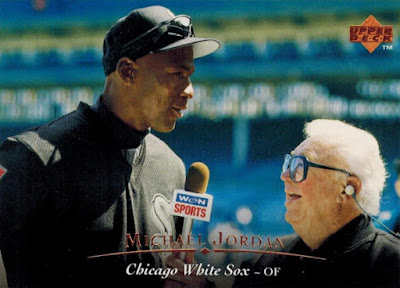 Some zero-year cards are, admittedly, cards that probably shouldn't exist in the first place.

Most of these involve stars in other sports who excelled in other sports (MJ, Ricky Williams, John Elway, etc.) and wound up on gimmicky baseball cards -- but that doesn't stop me from chasing them, because they're still fascinating (if unnecessary) pieces of zero-year history. 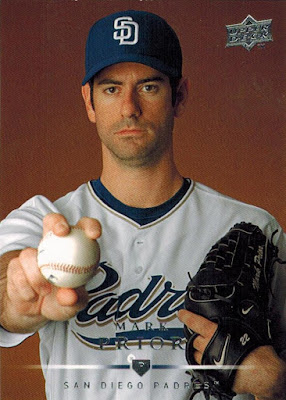 Sometimes zero-year cards come about because the player just wasn't good enough to make that team for whatever reason.

If you go by strictly big-league experience, Mark Prior was a career Cub. But his minor league comeback attempts tell a frightfully different story -- after getting nixed by the Cubs, Prior latched on with the Padres and the Rangers and the Yankees and the Red Sox and the Reds (deep breath) before deciding enough was enough and hanging 'em up.

As far as I know, this Padres card is the only one from that myriad of comeback attempts, and it tells a story way deeper than any stat sheet ever could. 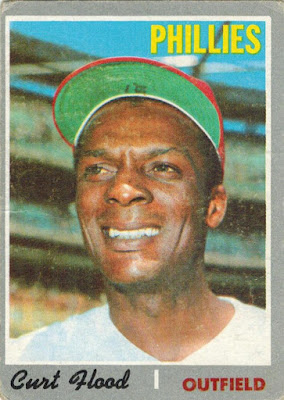 Curt Flood was traded to the Phillies in 1970, but refused to play for them in protest of baseball's evil reserve clause and sat out the entire year -- thus resulting in what is probably the most famous zero-year card ever made. 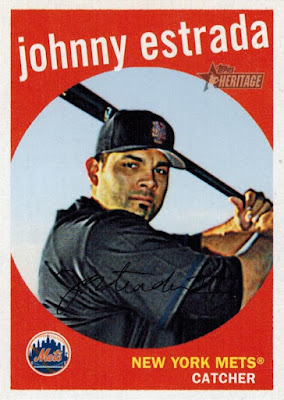 Zero-year cards are strange enough on their own, but a select few have wandered into the downright bizarre.

Johnny Estrada was a New York Met for about three weeks between November-December 2007, after having been traded there from the Brewers. Then the Mets then basically said Nah, we're good and non-tendered Estrada, thus making him a free agent. It wasn't a last cut in spring training or a sudden trade or anything that might otherwise result in a card being made -- this was in December of the off-season, meaning that Johnny Estrada was never really close to actually playing for the Mets.

But apparently the checklist for 2008 Topps Heritage was finalized sometime during that three-week stretch, because, wouldn't you know it, there's Johnny Estrada, in all his (nonexistent) Mets glory. 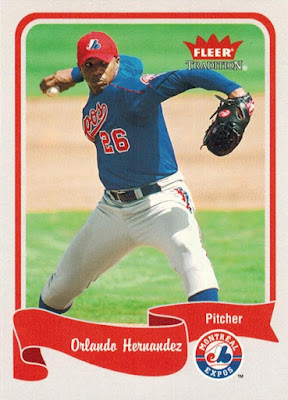 Sometimes injuries create a zero-year card, which makes me feel kinda evil about the pleasure I take in this whole zero-year thing.

Take Orlando Hernandez, who was traded to the Expos in 2003 in the last year of his contract, only to miss the entire season due to arm surgery, never actually playing for them -- but, of course, I still want all the Expos cards of El Duque! 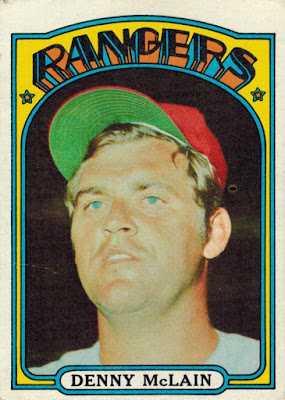 Some zero-year cards exist in a gray area.

Denny McLain played for the Senators in 1971 and was still with the franchise when they moved to Texas and became the Rangers that offseason. Even though he'd be traded to the A's in March, before the Rangers played their first game, it was too late for Topps, who'd already included McLain in their '72 set as a Ranger, thus unwittingly documenting something that never happened.

Even though McLain shows up in the team listing of the Senators/Rangers organization as a whole, I still consider this a zero-year card because my focus is on the jersey, and history shows that Denny McLain never played a game with the Texas Rangers. 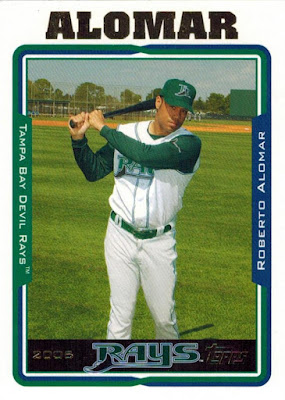 And finally, sometimes zero-year cards exist because an aging star decides he'd rather not go down in the long history of once-great players ending up in obscure uniforms.

What they might not know, however, is that their inklings that maybe they still have something left in the take, that maybe they wanted to play one last year don't just get torn from the history books. Roberto Alomar, for example, was a Devil Ray for a couple months in 2005 before deciding to retire in the middle of spring training rather than play for that miserable team. But that didn't stop him from showing up in 2005 Topps as, yes, a Devil Ray, thus preserving that zero-year non-stint in the annals of baseball history.

Maybe my interest in these weird, wild pieces of cardboard is that they, in essence, write a different history of baseball as we know it, create some weird alternate universe -- thus adding another glorious, maddening chapter to what is already a mad, mad world of baseball cards.
Posted by Nick at 6:13 PM

Good deep dive on something you don't hear much about.

I don't think there'll ever be a definitive standard for what makes one a zero-year wonder, but I think it's pretty interesting that it can be open ended enough to include everyone from players just breaking into the professional ranks to veterans lost in weird roster shuffles but just happened to get a card at the time.

I mean technically my favorite player of all time, Luis Torrens is a OYW.

I'd count the McLain because the card says Rangers and he never played for the Rangers. The card doesn't say Senators / Rangers.

Voting for the Curt Flood.

Another category that doesn't get addressed here: Players shown with expansion teams they never made it to opening day with.

I'd forgotten about Estrada, and I'm a Mets fan!

The Alomar is the best of the bunch I think.

I started reading the post and instantly thought of Drew Smyly with the Cubs. I was wondering if he counted and then you enlightened me with the Mark Prior scenario/card. Ahhhh... I feel so much better.
Great post, Nick. I had no idea El Duque was in the Expos organization for a brief time. That's some beautiful cardboard right there.

Just found out that Chris Gwynn played for the Padres. Now I discover that Alomar almost played for the Rays. Learning all kinds of stuff and I haven't even had my first cup of coffee.

great read! I'm always learning something new on your blog. Alomar in a Rays uniform? How did I not know that?? It's so wrong! He should've called it a career a few months sooner.

I've seen the Rizzo a dozen times before, and it always makes me wonder what could have been. The Thor Blue Jays card and the Alomar Rays are really neat. I've never seen the '70 Flood before, but that is a historic issue for sure.