(Free Card) Friday on my mind 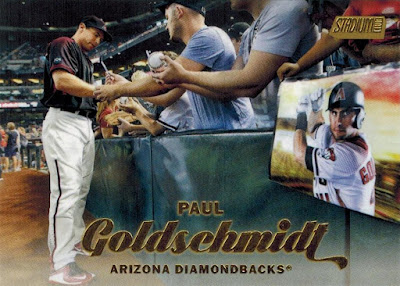 I must say the recent Free Card Friday fad has been great fun.

With the absence of card shows, the free stuff so graciously offered up by my fellow bloggers has filled a void in my life. It's almost like virtual dime boxing. But not those teasing kind of dime boxes -- the ones I walk up to, flip through for a few seconds, and, quickly seeing nothing of interest, walk away disappointed. Nope, these are good dime boxes, the ones I could spend hours going through.

I've been lucky enough to secure a whole bunch of nifty Free Card Friday goods from a number of different bloggers over the past month or two, but the most prominent of my selections have probably been Brian of "Highly Subjective and Completely Arbitrary" fame. 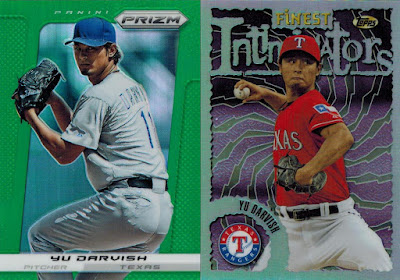 In addition to the all-too-fitting golden Goldschmidt parallel at the top of this post (a mini-collection hit!) came these two shiny Darvishes from Brian's Free Card Friday festivities.

I'm not usually a fan of Prizm, but there really isn't enough green on baseball cards these days. 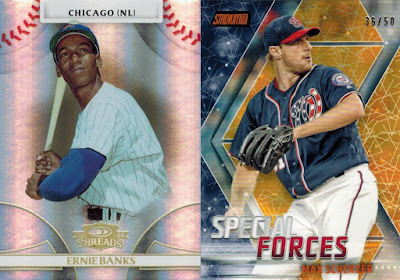 That colorful Scherzer parallel was another Free Card Friday find I knew was coming, but the shiny parallel of Mr. Cub was a complete and joyous surprise. 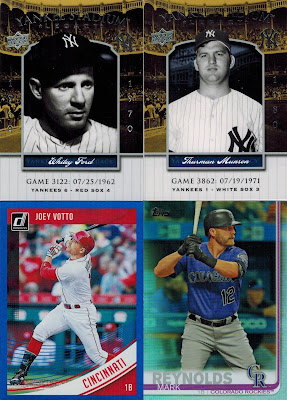 But when such great cards are up for grabs, I can't help but do it -- no way I'm letting Thurman Munson inserts or Mark Reynolds parallels slip by me (yes I collect Mark Reynolds, for some reason). 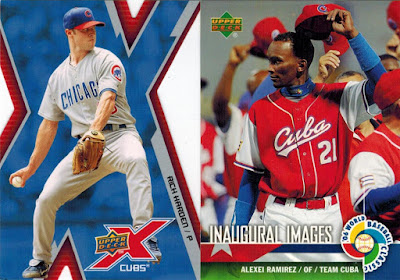 Once again, Brian threw a few complete surprises in with my Free Card Friday spoils.

The Harden is a die-cut parallel from that weird era when Upper Deck seemed obsessed with the letter X, and the Alexei Ramirez is a mini-collection hit and a very welcome new card of a guy I've been a fan of and collected ever since he played for the hometown White Sox. 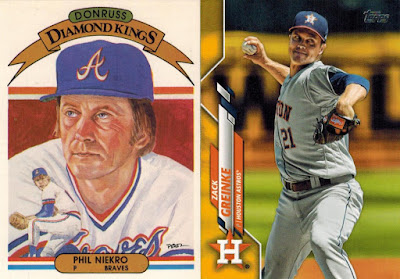 These were part of a Free Card Friday event Brian held a while back and haven't gotten around to posting until now -- I've still yet to find any of those Walgreens parallels in my area, and if it weren't for Brian I wouldn't be convinced they actually existed.

Also, while I've never been a fan of Diamond Kings, they still beat the hell out of Topps Project. 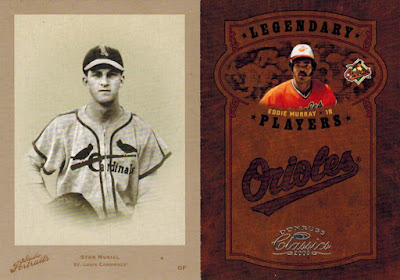 But Brian's far from the only person who's offered great Free Card Friday stuff on their blog -- these two came from Jeremy of the "Topps Cards That Never Were" blog.

Both cool, but I'm especially fond of that Musial since it's just a beautiful card (doesn't hurt that it's numbered to all of 30 copies!). 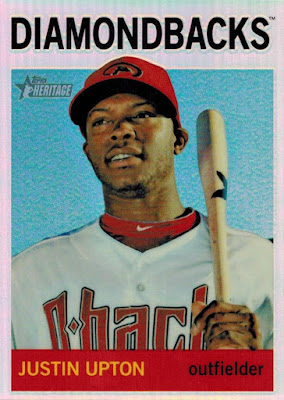 This Justin Upton Heritage refractor came from Kevin of "The Diamond King" who recently returned to the blogging business (welcome back!).

I probably shouldn't like chromed-up versions of old Topps designs, but my brain doesn't always listen to reason when it comes to shiny baseball cards. 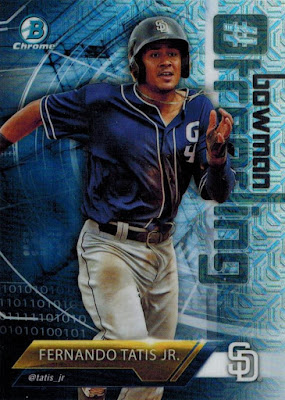 A bigtime rookie on a Free Card Friday?

Apparently, because I graciously snagged this one for my budding Tatis Jr. collection from Rod of "Padrographs" on one of his Free Card Friday posts -- I'm a big fan of the younger Tatis but it still pains me to think that he was once in the White Sox system (and traded for James Shields!). 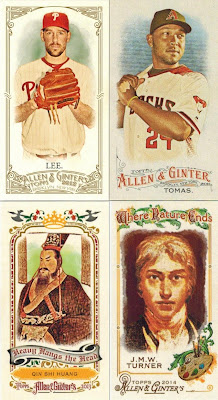 John of "Johnny's Trading Spot" has been holding Big Fun Games each Friday for the past few months, and I was lucky enough to get in on a couple.

I won a fun lot of A&G minis in a recent BFG, which coincidentally was the same prize pack I received the last time I participated in one of 'em (and I'm completely fine with that). 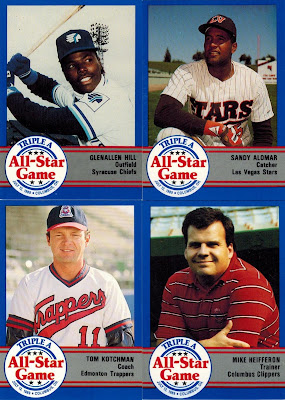 I entered another of John's BFGs recently, but like a dunce I forgot about it at thus lost my pick when time ran out -- thankfully John sympathized with my idiocy and still sent me a fine consolation prize of minor leaguers.

There's a few recognizable names in here, an all-star trainer(!), and my first card of Tom Kotchman -- a former coach and scout and the father of Casey Kotchman, one of my main player collection dudes. 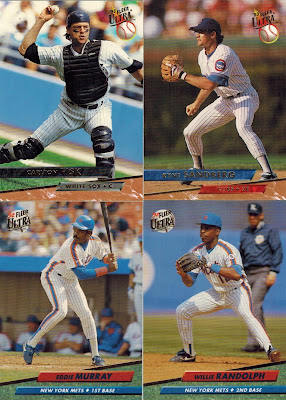 Finally comes a handful of cards from Chris of "The Pedestrian Collector" who opened up a box of 1993 Ultra and offered up his extras in a recent Free Card Friday post.

I didn't think I still needed a whole lot of cards from this set, but apparently there's at least four because these stars I claimed were all new to me (I'll never stop confusing it with '92 Ultra, though). 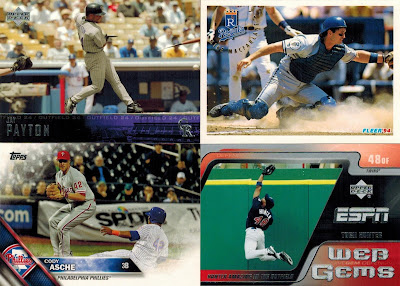 Not long before his Big Fun Game party, Chris also sent me a separate package o' cards that included a nice stack of mini-collection hits (including one of the elusive 42-jersey photo variations from 2016 Topps!). 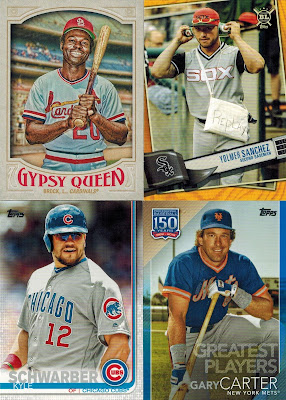 Chris knocked out a whole bunch of recent needs, including yet another photo variation with the Schwarber and a gold parallel of one of my Cards of the Year for 2019. 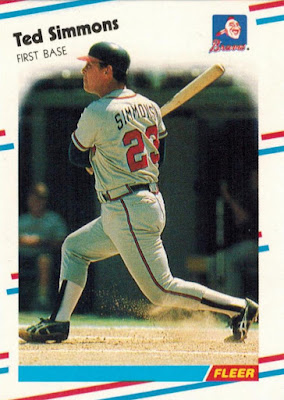 As I've mentioned before, I recently started collecting Ted Simmons, which means that I raided Card Barrel's inventory for every card of his they had. But for some reason they didn't have a copy of this wildly common '88 Fleer single, which made it a prime Dime Box Dozen suspect and one I'm glad didn't last long on the list thanks to Chris.

So, yeah, you could say Free Card Friday (and its various incarnations) have been good to me lately. And I know that, despite my promises, I've yet to reciprocate the favor and offer my own free cards to the masses. But without revealing too much, let's just say I'm planning on it...soon.

Until then, it's Monday, and I've got Friday on my mind.

That Murray is real pretty. I don't know why, but I love Orange Orioles Murrays!

It is true that not all dime boxes are created equal. Though I would take any right now.

Never been a fan of Diamond Kings? Yikes.

Fleer did a great job on that Simmons card. And there are a handful of Topps Project cards I've considered purchasing (still haven't pulled the trigger), but 80's DK definitely trump them.

The quality of 'free card' offerings has been quite impressive. The Scherzer was a great get, and the Musial and Murray are nice, too. I'm thrilled I could contribute to your various collections.

Also I promised myself I'd stop claiming cards but I might have to make an exception if you join the Free Stuff Friday fun! :D

That Musial is really neat! I like the way that the photo was done, they made his portrait look like it's even older then it already it is, gives it kind of an ethereal quality.