The world is ending, but at least I have my cards 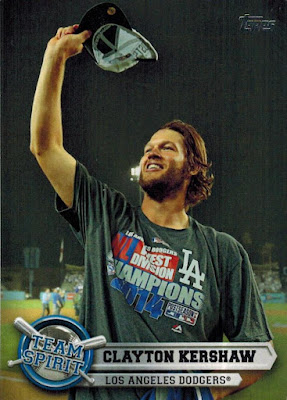 Okay, so the post title might be a bit extreme, but there's a hint of truth in it.

There are many reasons we collect cards: some of the obvious ones being pure fun, love of the game, etc. But I think there's another big factor here that doesn't get discussed as often. Comfort. I collect cards because they are a reliable source of joy, a backbone for it all. I've been doing this long enough that I literally can't imagine my life without my collection, and over time it's brought me so much comfort in what can often be a mad, mad, mad, mad world.

Enjoying my cards -- simply sorting them, or looking through them -- has helped pass countless bad moons, and will surely pass many more in the future. 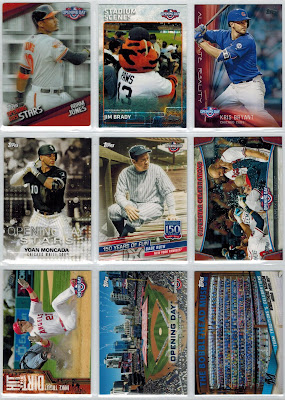 Even better: a collection is never complete, always growing, which provides all the more opportunities for joy and comfort.

I've received a few packages from loyal readers as of late that did their fair share in bulking up my binders. One came from a reader named Arthur who reached out and said he had a bunch of stuff from my various Opening Day want lists...and boy he wasn't kidding.

He took down about 90 percent of all the inserts listed on my OD need lists from 2015-present -- including some I've long loved ("Superstar Celebrations"), some I rarely see ("Team Spirit"), and others I'd completely forgotten about ("Hit the Dirt"). 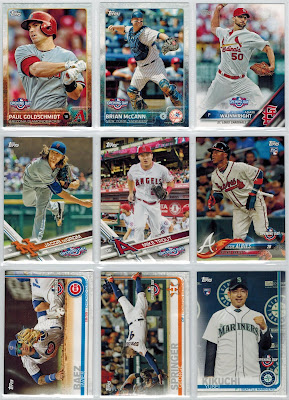 That also came with a similarly decimating attack on my recent OD base want lists as well, which I was happy to see.

I still have a soft spot for Opening Day, and I'm way more excited than I probably should be about (hopefully) finding some of the 2020s on Target shelves soon. 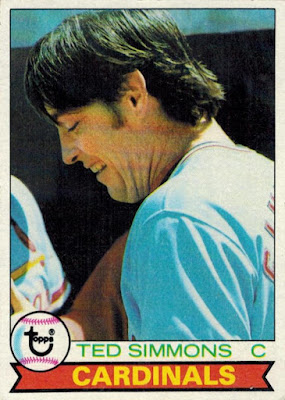 Jeff B., a reader who's sent me cards a few times now, knocked this '79 Topps Ted Simmons off my Dime Box Dozen list recently.

I'll probably have more in this in a future post, but I righted a longtime wrong and started collecting Simmons after his election to Cooperstown. Thankfully, I was able to secure most of Simba's base cards off Card Barrel, though a few obvious ones -- like this '79 Topps -- weren't available there and thus became gaping holes in said collection.

I've noticed a kind of awkward beauty to a lot of Simmons's cards, and this one definitely has that going for it. 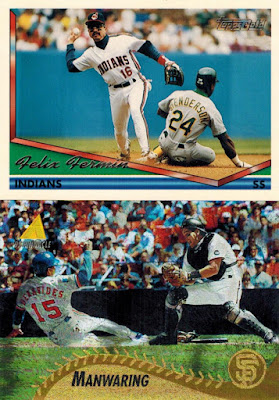 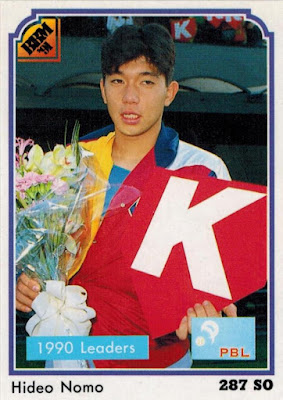 I came home one night to find an entire box of cards from longtime reader Mike W. waiting for me -- I can't help but think I'm really not worthy of this whenever a big box o' cards arrives in the mail.

And after I opened it, I soon declared myself totally unworthy of the '91 BBM Hideo Nomo(!) Mike had so graciously included. 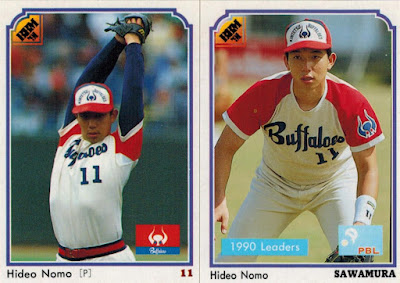 And if I'm unworthy of that, then how can I even begin to describe how I felt when I found second(!!) and third(!!!) BBM Nomos in there?! 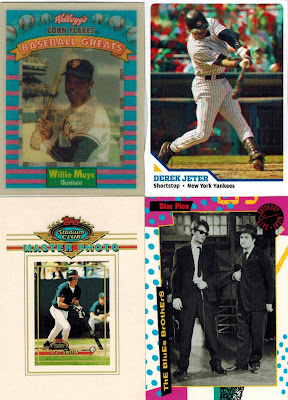 Though they might take a bit of a backseat to the Nomos, don't sleep on the other oddballs Mike sent me (including my first Blues Brothers card!). 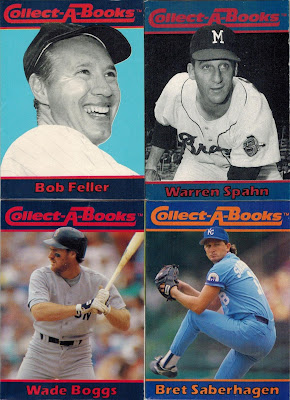 The perfect collision of books and baseball cards, my two favorite hobbies. 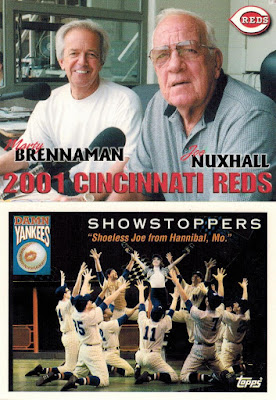 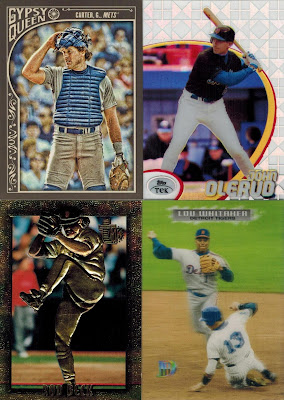 Nifty player- and mini-collection hits here, although I probably still have something like 8,454 of those Olerud Topps Tek patterns to chase down. 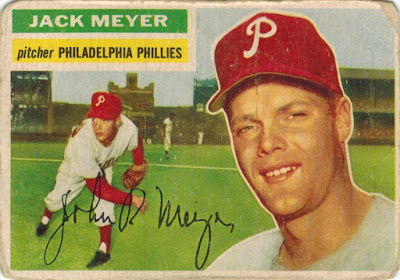 Finally comes some cards from Wes W., a generous reader I've known long and well from the insane kinds of packages he used to drop on me -- and while Wes settled for a much more modest PWE this time around, it still packed a heckuva punch.

Leading off was this '56 Topps Jack Meyer -- no, I have no idea who Jack Meyer is, but when someone sends you a free '56 you need not ask such questions. 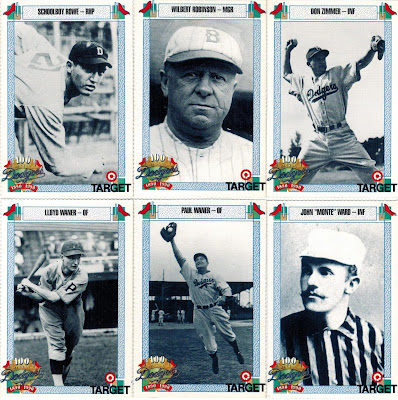 Most of the PWE consisted of these excellent Target Dodgers even though I'm probably about the 186th most prolific Dodger collecter in the blogosphere.

I like big, sweeping team-issued sets like this because a lot of the cards in them (including almost all of the ones Wes sent) feature guys who were much more famous playing for other teams and/or were only Dodgers for a short time. 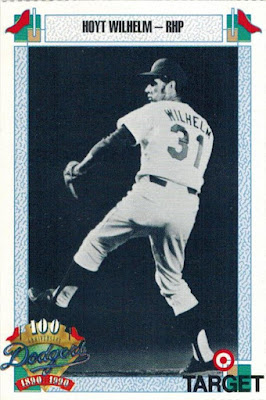 But one Target Dodger easily stood out among them all -- and that's the immortal Hoyt, of course!

There aren't many Dodger cards of Hoyt (this is only the sixth one I own), which kinda makes sense because he was a Dodger for all of 25 games at the tail end of his Hall of Fame career. And despite my many Hoyt-collecting years, this particular one lurked in the shadows until it arrived on my doorstep, which really is a fantastic way to discover a baseball card you never knew you needed.

So, sure, if the world is ending, so be it -- with all these cards waiting be sorted and loved, I'm willing to hole myself up in my room until need be.
Posted by Nick at 6:12 PM

Wow,this is one of the best bunches you've ever posted!

But...you know my love of musicals,so best for me?
DAMN YANKEES!! DAMN!!

Fantastic Manwaring! I have not seen the Bobblehead Museum cardboard either. Gotta get me one for the funhouse binder! Be safe out there at the HPB. Have you had any instructions or guidance as to handle public interactions?

Nice getting a couple BBM cards. I'm really disappointed that I'll have to wait another 2 weeks until opening day. I just hope the season isn't outright cancelled.

You hit the nail on the head with your opening paragraphs. It's no coincidence that when I have a crappy day at work, I'm off to a nearby Target looking for cards to buy... and it's not about the hits, it's just about thumbing through cardboard.

Cards have definitely provided me comfort over the years. I wouldn't say it does 100% of the time (occasionally collecting can cause me stress), but the days of comfort outnumber the days of stress... 30 to 1.

Awesome variety of cards. I'd love to one day stumble across a box of Star Pics SNL. That was one of my favorite shows from the 80's and 90's.

The hobby is definitely a source of comfort and distraction from more serious issues. That is, in part, why I put in the work to solve my lack of blogging problem. That's quite the eclectic bunch of mail days. I especially love those BBM Nomo cards!

Card collecting is a huge comfort and stress relief for me, too. I'm feeling very unsettled because I haven't been able to get to Target to stock up on new cards (bottled water? hand sanitizer? I got all of that. What I really need is some 2020 Heritage!)

I'm considering building a couple Opening Day sets because I have a 300-card Stadium Club set in an 800-ct box. OD would be perfect to fill out the box because they're cheap, small sets.

Master Photos! Those are great.

Love the kershaw up top! Not sure I know of six different dodger Hoyt cards - i assume that number includes postcards?