A blaster of 2020 Donruss, for some reason 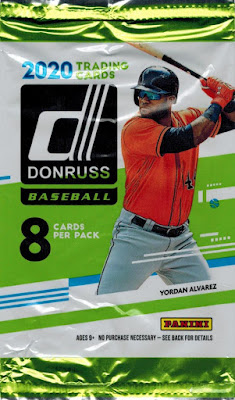 That's an excellent question...and one I really don't have an answer for. Donruss has no logos. Donruss doesn't excite me. Donruss has brought up the rear in every Set of the Year countdown I've ever done. It's not a set that invokes much passion. And yet -- there I was the other day, throwing a blaster of the stuff into my basket of quarantine supplies (aka groceries) during a recent Target run.

I'll attribute it to a couple things. One: being cooped up around the house really starts to trigger that pack-busting itch. Two: I figured I'd get a blog post out of it, if nothing else. It's true: I sometimes buy cards just to write a blog post about them, and I hope I'm not the only blogger who does this. (If only we had expense accounts.)

And so now, in all its bland, middling glory, I present to you my blaster of 2020 Donruss. 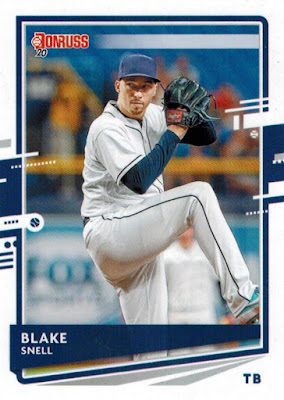 Panini managed to make a few of the recent Donruss sets at least semi-interesting by including nods to classic Donruss designs, which was nice because I think that should really be the point of present Donruss. This year's version has none of that, as far as I can tell.

Just a dull tornado of a design, full of guys in plain caps and jerseys playing for their company softball team. 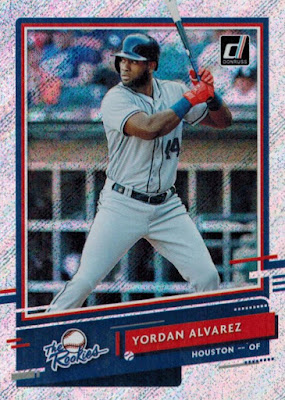 A point in favor of Donruss: you really get a lot of variety out of a blaster.

A point against Donruss: maybe even a little too much variety. Even out of a measly $20 blaster, I felt like I needed some kind of pocket guide to all the inserts and parallels and variations and colors. It took me a good few minutes of Internet sleuthing to determine that this uber-shiny card of uber-rookie Yordan Alvarez is something called a rapture parallel, which are exclusive to blasters (I think?).

Sometimes I wonder if Panini is trying to get us to ignore the boredom of the base design by throwing in lots of bells and whistles and shiny things. 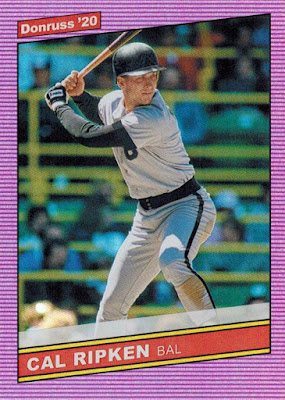 Case in point: this is a subset variation holo purple parallel (deep breath). 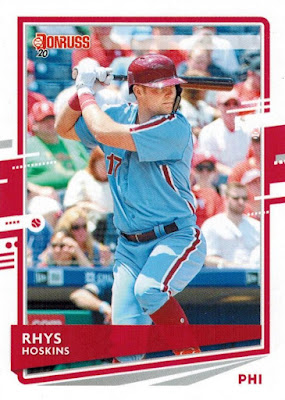 Question 1: Is an airbrushed throwback still a throwback?

Question 2, and forgive me if this sounds odd: Does anyone else notice that Donruss cards smell different than most cards? I know cards aren't printed on good ol' cardboard these days, but Donruss seems to reek of high gloss and chemicals to me. 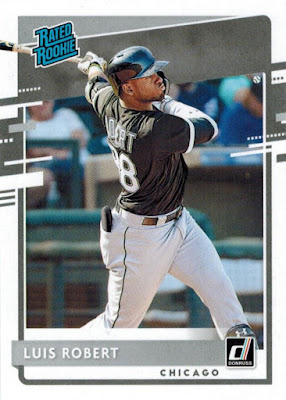 It's not often I put a guy in my binders before he's played a major league game, but I think I'll make an exception here. 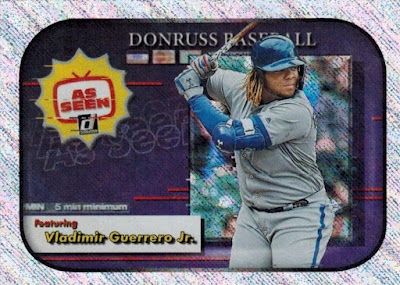 Remember what I said earlier about Panini trying to distract us with bells and whistles?

Sometimes it works, because this thing is awesome. 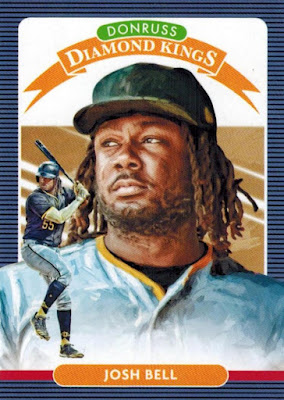 Never been a big fan of Diamond Kings, and 2020 Donruss isn't doing anything to change that. 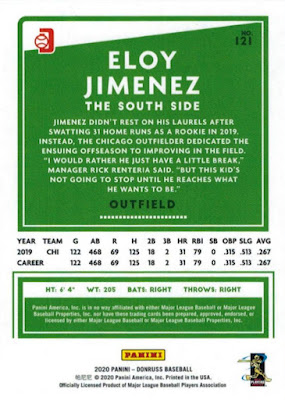 One advantage I'll give to Donruss is that they make it easy to tell the variations apart from the base cards -- the variations (like this one, which features "The South Side" instead of "Chicago") have a clearly different Donruss logo in the top-left corner. 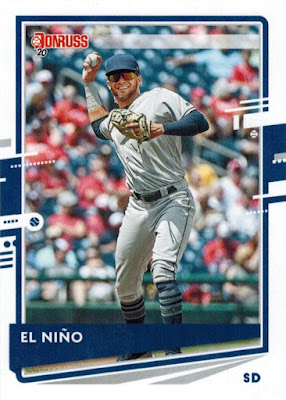 Easy to decipher or not, most of the Donruss variations aren't anything exciting -- but I do like these nickname ones if for no other reason than they stand out in a binder page. 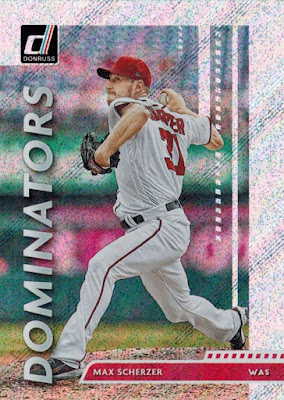 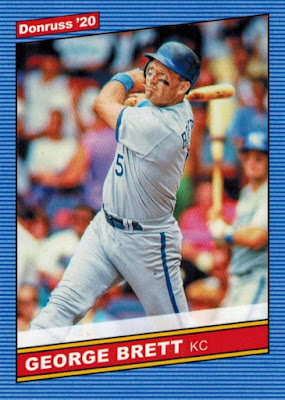 This year's Donruss does continue the trend of a subset paying tribute to a vintage Donruss set -- the 2020 version goes back to the '86 design (easily the most '80s look in the Donruss catalog).

While '86 Donruss is close to the bottom on my list of all-time Donruss designs, it's kinda cool seeing these bizarro world versions of actual stars of the time period like George Brett here. 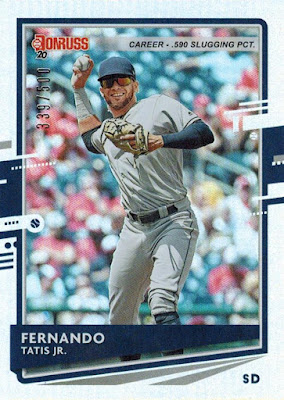 I pulled a nickname variation and this numbered stat line parallel of Fernando Tatis Jr., but not the base card...oy. 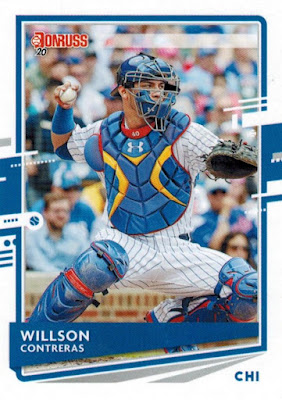 Donruss should really look into making an all-catcher set. 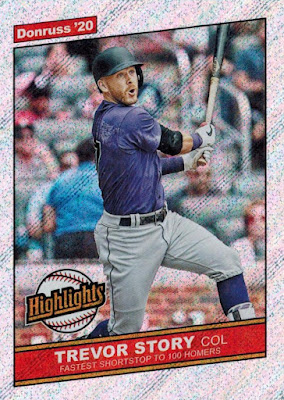 Donruss Highlights are among my favorites from the bonanza of '80s oddball box sets, so this is cool to see. 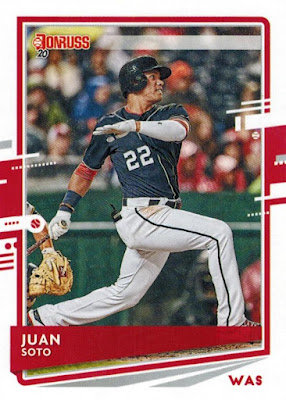 Since I'm trying to find nice things to say about Donruss here, I do appreciate the quantity of cards I get out of a blaster, even if most of the cards themselves aren't all that exciting.

So often when I buy a pack or a blaster or whatever of cards these days, I kinda feel shorted even though it says how many cards are in the thing right there on the wrapper -- given that, 2020 Donruss's ratio of 11 packs of 8 cards per in a blaster isn't bad. 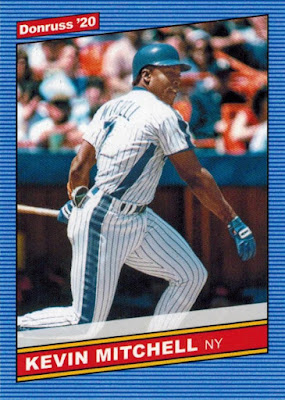 I was way too giddy about pulling a card of Kevin Mitchell in a 2020 product (and a Mets one!). 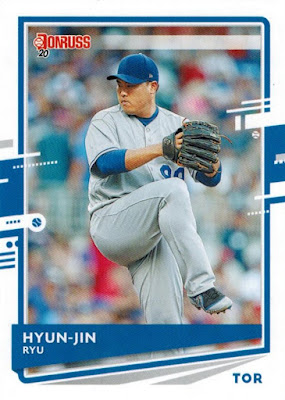 One notable thing about Donruss is that it's often the first to feature offseason signings in their new duds...kind of.

Given that all the cards are airbrushed, all Panini really has to do is slap the new team name on the card and voila -- though in this case it at least partially works since the Dodgers' and Blue Jays' color schemes are similar. 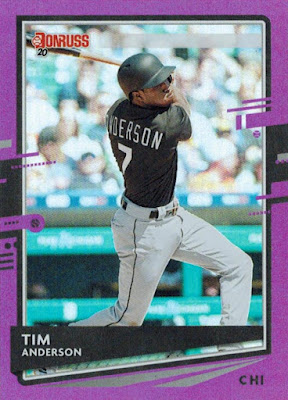 A fine addition to my brand new Tim Anderson collection. 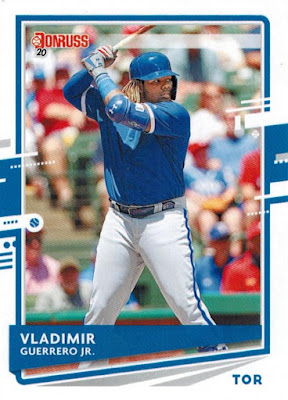 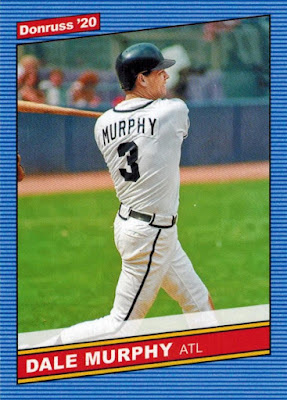 For some reason, this pack only contained seven cards -- which I wouldn't have even noticed if I didn't record every card for this post. 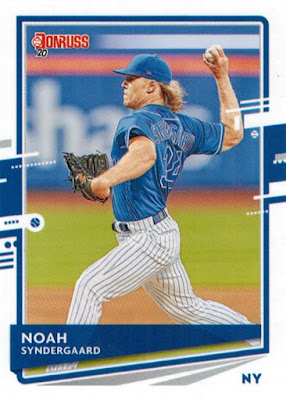 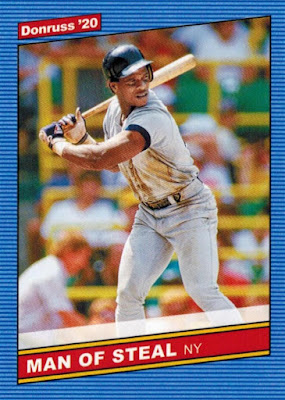 Not sure how much I like the nickname variations on these '86 tributes -- a bit too jarring for me. 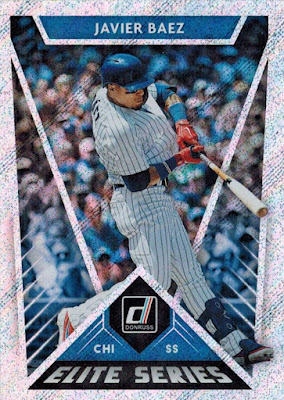 I don't have a prayer of owning most of the early '90s Elite Series originals, so this'll have to do. 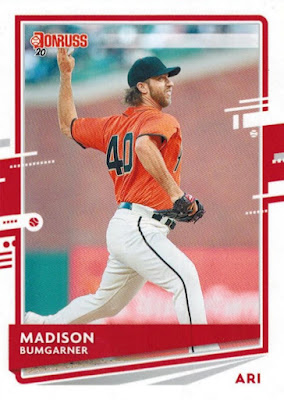 If this is a Diamondbacks card, then I'm a baboon's uncle. 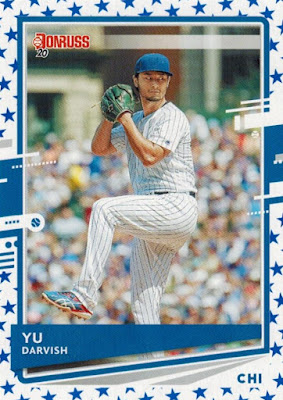 An Independence Day parallel of a Japanese star, because America.

And that's it for my first-ever Donruss blaster. I will say this -- given that most of my recent Donruss experience has been limited to going through base card after dull base card in dime boxes, it was at least a tad more exciting to open up actual packs of the stuff and see how the set gels together in that format. But overall: I'll probably end up sticking most of these in the appropriate places in my binders, never again taking a closer look at them...which really isn't the point of collecting baseball cards. Thus, Donruss fails.

So if you ever see me at Target, about to put another blaster of these in my cart, do me a favor and slap it out of my hands, would you?

You're being too hard 'em!..i'm not crazy about the no logos thing..but you've shown a lot of cool cards here!

Donruss seems like a fun rip if nothing else. If that set had proper logos I'd be all over it!

The airbrushed logos make this set a no-go for me.
But those '86 throwbacks look cool otherwise.

No logos ,no interest from me ,but at least you got a blog out of it.

They *do* try, I will give them that.

That Madison Bumgarner card may be the only card from 2020 Donruss that I will seek out, and it's only because MadBum no longer has a contract with Topps.

Just a disaster. And why do they have to alter the '80s tribute cards each year? There was no white line on the bottom of the photo on '86 Donruss.

I too will buy a product like Donruss just to get a blog post out of it. If my local Wally World had any I probably would have done so already.

I don't know why, but the tiny baseballs in the set design annoy me.

Weird that they airbrushed out the racing stripe on Mitchell's Mets jersey. I wonder if the Mets copyrighted the stripe?

These Donruss blasters are very trendy. 2nd one I've read about today. I'm normally one of those people who follow others... but that won't be happening with this product.