Are base cards going extinct? 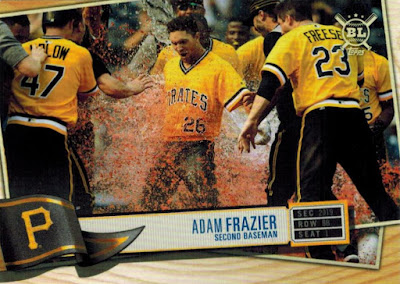 To me, 2019 Big League was a symbol of a larger trend I've been noticing in the past couple years. I loved last year's Big League, a low-end brand that (predictably) isn't all that popular among the breakers and the other bigwigs of the hobby. But even as recently as 2018, I was able to secure most of the base cards I needed from Big League and other lower-end sets at card shows, without much difficulty.

Lately, different story. My 2019 base want lists -- which are normally all but taken care of by year's end -- are still kinda bloated because a lot of vendors chose to leave their base at home. Sets popular with breakers (Flagship, Heritage, etc.) were still easy enough to locate in the wild, but conversely, I found maybe a dozen 2019 Big League singles I needed in dime boxes all year (that's across maybe six or seven card shows, mind you). Also there was only one vendor who had 2020 Topps base at the card show I attended earlier this year -- inserts, parallels, and hits, sure...but almost no base cards.

And so I'm forced to ask the question I hoped I'd never have to ask: in today's money- and breaker-oriented hobby, are base cards really going extinct? 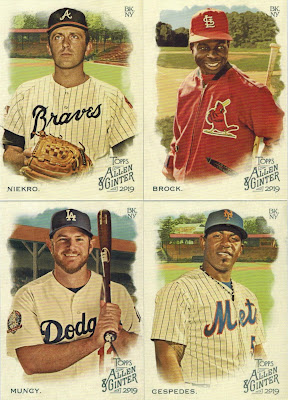 I sure hope not.

Inserts and parallels and whatever else are fine and good -- and sure I even prefer the inserts to the base in some sets -- but the real core of why I collect at all lies in the base cards. I buy packs for the base cards. Which is why it pains me when I hear stories of people buying boxes of cards and leaving the base behind, or even throwing them out (gasp!). No, no, no, no, no! Base cards are more than protection for the inserts and hits: they're why we should be opening packs in the first place.

Luckily, most bloggers seem to understand this, which is why I thought it apt to showcase a package I recently received from longtime trade partner Kerry of "Cards on Cards" -- a package that included some A&G and, yes, even Big League(!) base still collecting dust on my want list. 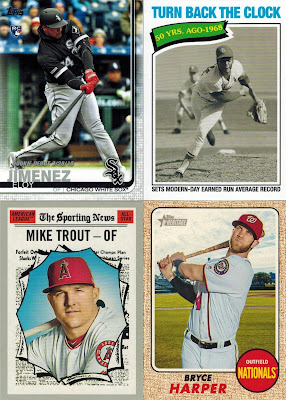 I rely on base cards being accessible because I only have the budget and sanity to open so many packs -- eventually I'll run out of money or start pulling doubles and triples and quadruples.

In the past, most of my want lists eventually get whittled down to stars like Trout, rookies like Eloy Jimenez, or other non-dime box stuff and/or SPs -- though thankfully Kerry helped take care of some of those, too. 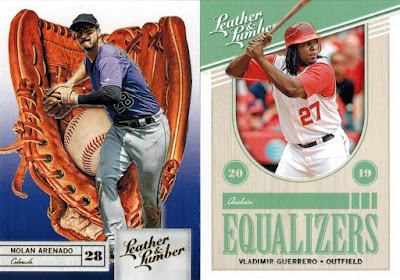 It's been particularly painful seeing gobs and gobs of cards from sets I don't care about available at shows over the past year or two.

I saw blasters of Leather & Lumber in the Target card aisle so many times last year, and I never bought a single one. The cards themselves aren't horrible -- these from Kerry are actually the first two in my collection -- but I was never really tempted to buy any. I think the $20 blasters only had like 23 cards in them (or something close to that) and were much more geared towards the "hits," which when you put it all together is a blaster I'll never buy because what did I just say about wanting base cards?

But with the amount of this stuff I saw at shows in 2019, you'd think it was the Set of the Year or something. 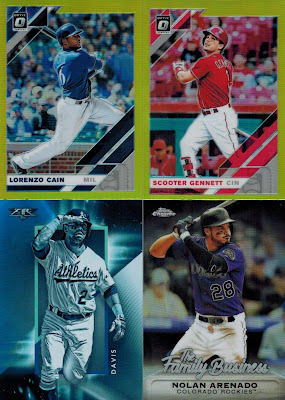 Player collection needs from more sets I never planned on buying -- it scares me that people could lose their minds so much over less-than-stellar sets like Optic and Update Chrome. 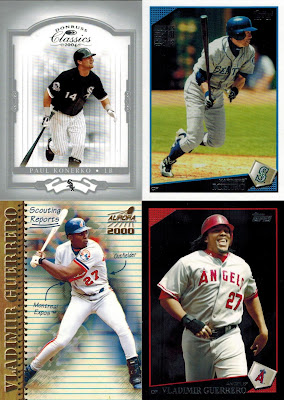 I enjoy getting more recent hits for my player collections (like that Ichiro reprint from 2019 Archives), but I get much more excited about stuff I need from sets like Donruss Classics and Pacific Aurora because it's not like packs of those are waiting for me at Target anymore. 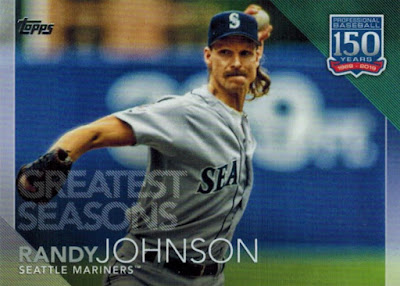 I'm not so much worried that card companies will stop producing base cards anytime soon. I'm more worried that the people who have access to most of those base cards (i.e. breakers and people who have enough supply to put them in dime boxes at card shows) are treating them more and more as filler, more and more as stuff no one wants. But I know that's not true. Because while it's easy to be blinded by all the patches and autographs and superfractors making the rounds in bigger hobby circles, those aren't the only cards people want.

Hey,finally a look at L&L!

I agree. For us set collectors, base cards are the foundation of our collections. I do love the insert too, of course. But unfortunately, money is the reason dealers exist at card shows and modern base cards are not huge money makers compared to other cards.

I have trouble trading away my duplicate base cards so I'm guessing maybe it's actually set collecting that's going away.

When I first got back into the hobby, I bought some blasters of 2016 Opening Day, figuring I'd end up completing the set eventually. But the base cards don't turn up at shows too much. I've picked up a few of the ones that I didn't get, but not many, and I still carry my want lists to shows. I suppose I could find them on eBay or something, but for what they're worth the shipping would be prohibitive.

There's usually some bubble cards in the base.

Seems to be harder to find base cards online at prices that make any sense too. Not just because of shipping either, seems like every storefront has fees that make buying/sellig base singles a non-starter. Which sucks. I'm glad here's enough of a trading community on Twitter to fill the void for now.

As a person who makes sets I know that its impossible to find singles of base as well an occasional SP or even an insert that I need. The thing is more & more dealers at shows will either have a bunch of shiny products or something in the high profiled stuff. So when I crack a box open I try to make it easier for others who might want the base singles as well toss in the inserts that I have no intention of collecting. So I understand the frustration that you are having Nick so if you ever want me to take a look at your lists lmk my friend who you know in the blogger world as The Collective Mind aka Greg knows I don't care on the prices & I just focus on helping people get a little bit closer to completing their sets as well if I do complete a set for them, the next time they go through them they remember that I helped them get it done. I can't count how many times I look at my sets remembering all the hard work I went through just to create it. From going to a National Sports Card Convention w/family & later w/friends to going to shops out of the area to finding some singles at the local shops as well I like going through boxes for the hidden treasure that I can find for myself or others so Nick don't give up I as a fellow treasure hunter. We need to have others understand that w/o base set building slowly dies. Plus I can't count how many times I have seen people at shows or shops open a box just for the quick buck type meaning the hot RC,INSERTS,GUED,AUTOGRAPH etc.... & they negatively pass on the base or if they have the base & the hot RC,INSERTS,GUED,AUTOGRAPH become a dud they keep it separated & all the things go into a box never to be seen unless they put them in boxes which we try to find down the road & get extra excited about when we finally find them. Case in point I was at a shop & found the 1990 Pro-Set insert of the Lombardi Trophy hoping that my discovery would not draw attention to the fact that the shop owner didn't realize that was in the box. As the saying goes 1's junk is another's treasure. So Nick if you ever want to join me in treasure hunting I'd be happy to have a fellow Hunter who likes a great hunt.

Like Poison75 said above, it's all about the hunt for me.
I'm still building sets, but I've moved to sets from the late 70s and early 80s, because cards from this era are actually more prevalent at card shows. It's no fun hunting if you ALWAYS strike out. The last modern day set I built was 2018 Topps Big League and I absolutely loved it! I feel it's produced with the set builder in mind. That being said, I only found two dealers (all the way up in Orland Park) who brought Big League with them to shows. Once I plucked the singles I needed from them it was to Sportlots and eBay to find the rest. Sigh.

I think one of the biggest reasons keeping base card from going extinct are collectors hunting rookie cards. I know Topps put the rookie card logo on inserts and all of their online products, but based on what I've seen... a lot of collectors prefer a pack pulled base card rookie over an insert card rookie. Okay... maybe I'm wrong and I'm just projecting. Regardless... I sure hope they don't go extinct, because I can't stand 90% of the inserts Topps produces.

You're finding some great Arenados lately!

I have always been a base set junkie. I never cared about inserts, parallels or getting "the" rookie card. Sure, I have a few of those, but that's because I admire them aesthetically. All I care about is the base set. Putting it in a binder and appreciating the whole set as a complete entity. I think the day Topps or any other card manufacturers stop making a base set that's not available in physical packs to the public, then the base card will be officially extinct. And it definitely feels like we're heading that way.

I don't this it's as much about set collecting going away as it is about the companies and dealers only focusing on the shiny hot rookies and making it harder for us to do it.