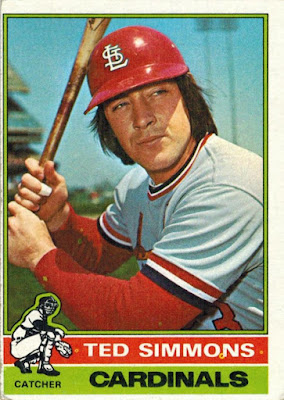 My work finally decided to close to the general public this week.

I can't say I'm surprised. I love bookstores, but there's far more essential businesses right now, and I'm honestly shocked we stayed open as long as we did (we even went forward with a huge sale last weekend which is pretty much the opposite of how to approach a pandemic). I'll still be able to work a few days a work answering phones, shelving books, mailing orders, etc., but for now it looks like I'll be staying home more often than not for the near future.

You know what that means: more time with my baseball cards! 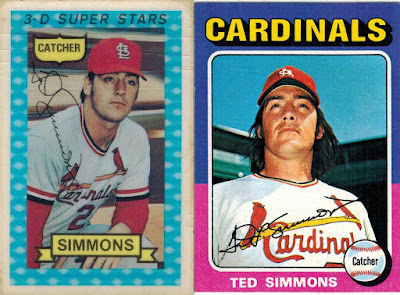 This comes in handy because I still haven't put away the cards I received from my latest COMC order a few weeks ago -- a stack of cards that included a nice boost for my new Ted Simmons collection.

I took care of most of Simba's common base cards with a large Card Barrel order, but COMC helped fill in some of the obvious gaps, as well a few more oddball items that weren't available over there. I usually only use COMC to find stuff that isn't readily spotted in the wild, but that '76 Topps at the top of the post was too gaping of a hole to leave in a collection of a classic '70s dude like Simmons. 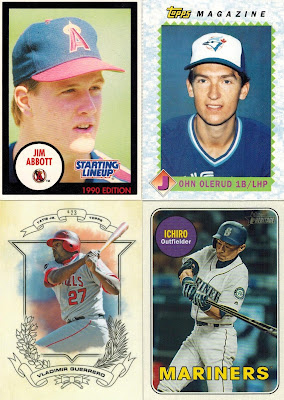 Obscure cards for some of my oldest player collections here.

The Ichiro is an action variation, and the Vlad's from one of those weird player-curated online sets (Tatis Jr.) that I can't decide if I like or not. 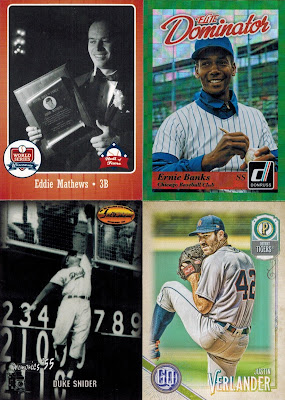 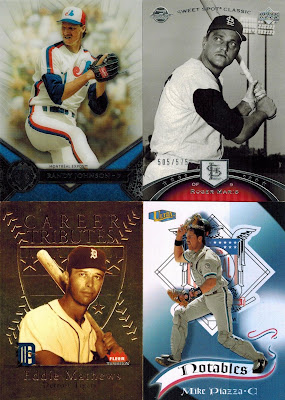 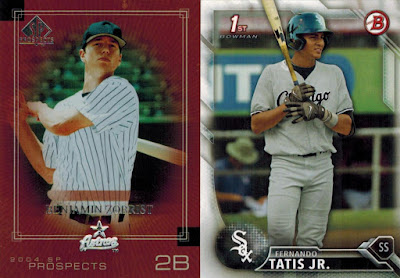 What's more, this COMC order even helped pin down a few new faces for my zero-year collection -- the Astros traded to Zobrist to Tampa for half-year rental Aubrey Huff in 2006, while Tatis Jr. for James Shields could go down as one of the worst trades in White Sox history.

Ah, who am I kidding -- it's already one of the worst trades in White Sox history. 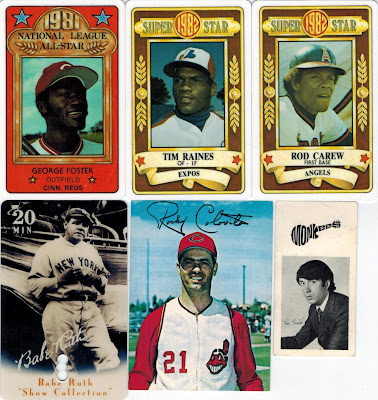 Just from this scan alone, you can see the rabbit holes and randomness of so many different searches: Permagraphics, phone cards, Rocky Colavito, and yes, even the Monkees! 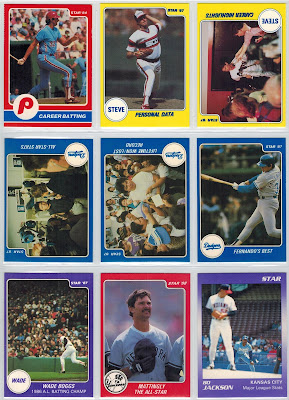 Someone must've been purging their '80s Star collection, because these were all obscenely cheap.

Each of these sets focus on a single player, which can be a huge hit-or-miss concept, but I really like the Stars because they tend to feature photos you rarely see in mainstream sets -- Fernando hitting! Fernando being interviewed! Fernando signing autographs! 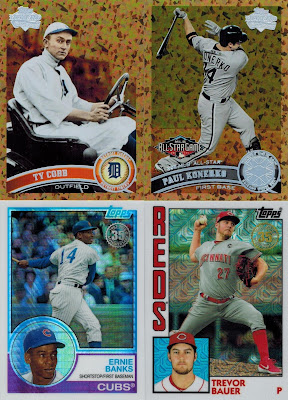 I also binged a bit on those super shiny silver pack singles because they were so cheap -- they go nicely with the obligatory liquorfractors I seem to add with each passing COMC order. 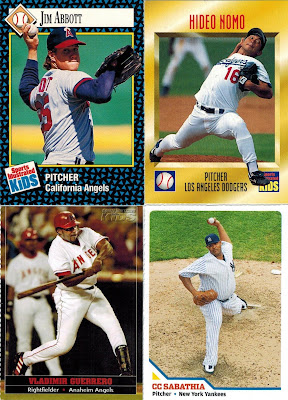 Sports Illustrated for Kids, always a throwback to my youth. 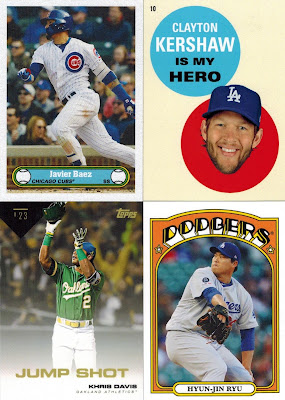 COMC is where I go to sample most of the online-exclusive stuff I never see in-person -- the Davis is another fun one from that Tatis Jr.-designed set, and the Ryu is from the Throwback Thursday series I can't help but love (even though '72 Topps isn't exactly an oddball design).

The top two are from the membership-only Montgomery Club set -- and while I hate the idea of having to buy a membership for baseball cards, fact is those just look a helluva lot better than most of what Topps is putting in packs these days. 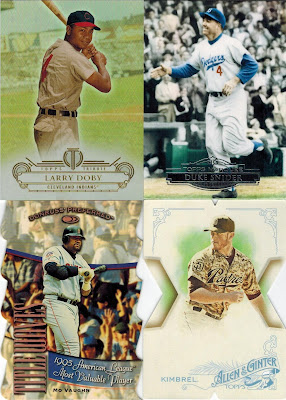 Thick cards, pointy cards, and other stuff that's just generally hell on binder pages (but were too cool to pass up). 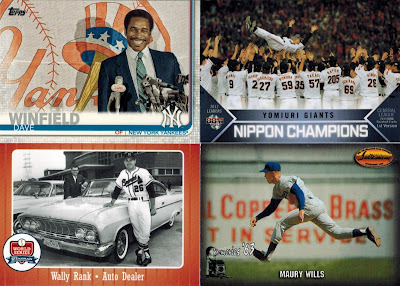 Other randoms -- I've had my eye on that Wills for a long time now, and the Wally Rank has to be my first card of an auto dealer(!). 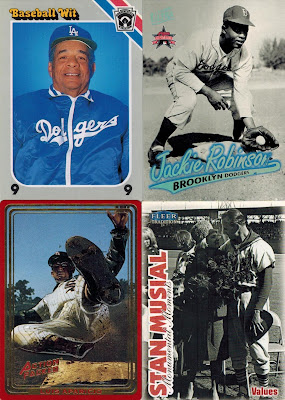 Legendary players on legendary cards -- seeing Jackie Robinson on the awesome '97 Ultra design just about made me swoon. 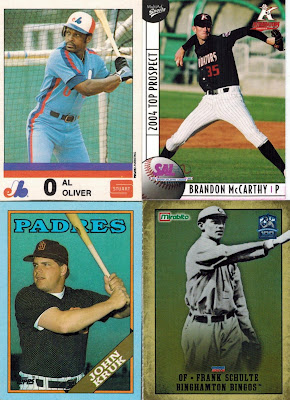 I've yet to find a place that can even light a candle to the sheer mass of oddballs available on COMC. 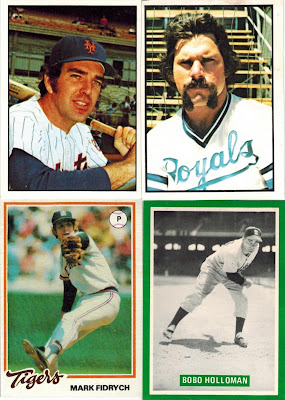 The Kranepool and Hrabosky are from the more scarce '75 and '78 SSPC sets, and somehow I never knew a Burger King verison of that '78 Fidrych existed until now. 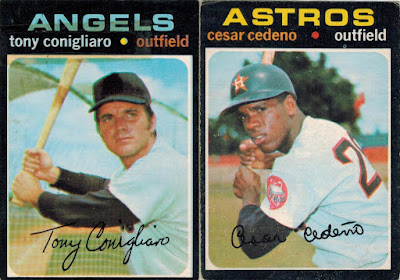 These '71 Topps suspects are easy enough to find in the wild... 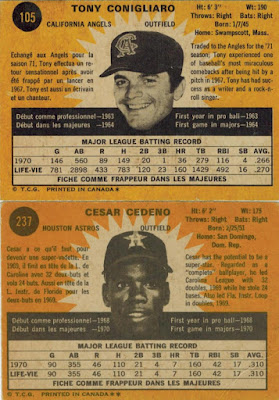 The Tony C is a classic Short Term Stop/sunset combo, and I have no idea why an OPC Cesar Cedeno rookie was available for all of a couple quarters -- buy now, ask questions later. 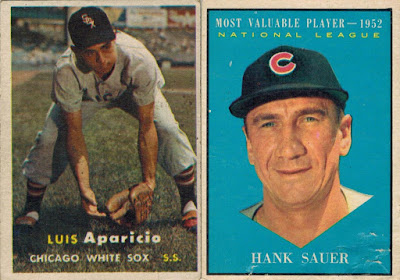 There wasn't a ton of classic vintage in my order, but -- and this has become a common theme with this post -- I couldn't believe how cheap Luis Aparicio's cards were. 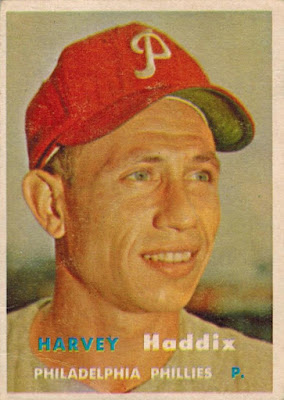 Finally, I decided to treat myself and shell out a whopping four bucks for this '57 Harvey Haddix, a former member of my "Keep Dreaming" list and the most expensive card of this order.

I have a special place in my heart for otherwise obscure/forgotten players who enjoyed one glorious moment in the sun (Bobby Thomson, Philip Humber, etc.) and Haddix might be the king of the hill there. Better yet, his cards go for almost nothing: with this one (the first and only card I've seen of his brief time with the Phillies) even this cheap collector now owns all of his Topps commons (1953-65) aside from his '53 rookie. It'll be a pleasure to add it to my binders, probably sooner rather than later since I'll be holed up with my baseball cards for a while.

Sometimes I look upon unsorted cards with despair, but not now -- with all the spoils of this COMC order, I'll be there right along with you, playing with my cards under the quarantine.
Posted by Nick at 6:29 PM

Great variety of stuff! I don't recall ever seeing that Jackie '97 Ultra issue, and you're right, it looks amazing.

a lot of new stuff here! I'm surprised by the number of cards I've not seen before! So many folks are now working from home. My business will not close unless we're directed by the government to do so - or our work force becomes ill, or afraid to work. We are taking all the necessary precautions. We support the auto industry and production is quite high right now. Even with their closures, the demand for our work is still there. All that to say, I'm a little jealous you get to be home with your cards! Be well, stay healthy Nick!

Auto Dealer and The Nez!..all right!!!

I've already purchased that Fernando at bat Star card and the other two happen to be in my COMC cart right now!

Lots of greatness, there.

It's always great to spend some time with some COMC spoils! Great haul as usual Nick!

Great stuff, I really like the Maris and Snider. The '57s are fantastic, and I have that Randy Johnson on my watchlist.

I've been shopping on COMC a lot more lately, since it's been the only way to get my hobby fix during the quarantine. I won't be getting the cards in hand for a while though :/

Quite the mix of cards there! Congrats!

Luis Aparicio cards have always been cheap (at least everywhere I've ever seen them), and at this point, I suspect that they won't be going up in price any time soon.

Lots of great stuff there! It's hard to pick a favorite!

This post/COMC haul has a little bit for everyone. Lots of great variety. My favorites are the SI for Kids, SLU, and Kellogg's cards. But the 71 OPC backs are cool too. I need to hurry up and spend my last few bucks over on their site so I can request my final COMC shipment.

Nice haul. The 75 SSPC sets are some of my favorites. If anyone's looking for some, I've got 70+ listed on comc (including the Mets and Yankees special sets). You can reach me through my website and get the blogger discount.

I'm jealous, I work for the schools and we're ramping up to support teachers posting assignments for kids to get electronically - some with equipment we're just giving them - and doing it all from home. I'm waiting for the whole thing to crash so I can have days off to make trades.

Love the Maris Sweet Spot - I want a starter set of those so bad, and the Cedeno OPC - not sure if I have one of those or not.

One guy you might check for unsung vintage heroes is Tom Cheney. He had the most strikeouts in a single game (in extra innings). He's only got about a half dozen vintage cards and some modern oddballs.

Hehe I have a bunch of Aparicio cards from my youth because he's always been an affordable Hall of Famer. No ida why he's so cheap but in many ways I'm glad since it made my "I want one card from each set" quest a lot easier.