Waxing nostalgic at the flea market 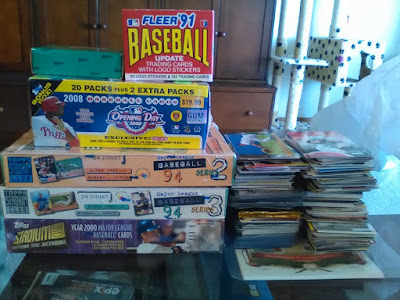 The outdoor flea market by my house recently opened up its doors for the season, and it wasted absolutely no time in knocking me off my feet.

After several dreary weekends around here, the weather was finally nice enough for a comfortable flea market run last Sunday, an event I've been anticipating all fall and winter. And I certainly picked a good Opening Day at the flea market -- for the love of god LOOK at that haul!

While the piles of singles I bought were easily worth the price of admission alone (more on those in a later post), I'd like to direct your attention to the left part of that photograph -- specifically, all the unopened wax I bought. 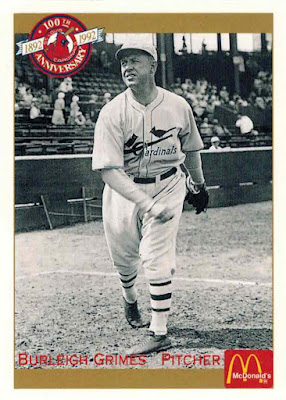 If you read this blog at all, you know I'm by no means a wax aficionado.

But at the prices people were handing boxes out at this weekend, I figured Sunday was a good time to become one. I opened everything I purchased in the course of about one euphoric hour later that Sunday (how anyone can keep unopened packs for prolonged periods of time is beyond me), and I can definitively say that it was the most wax I've ever opened in one sitting.

But surely I must've bankrupted myself in the process, yes? 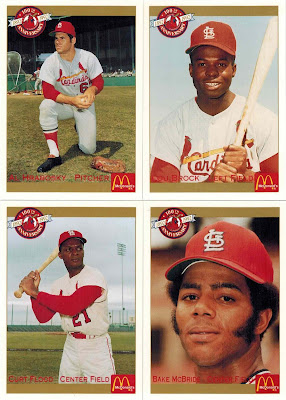 Take the two packs of 1992 McDonald's Cardinals I bought from one of my regular vendors. Fifty cents a pop! I love oddball sets -- especially ones that feature big names like Lou Brock amongst more fan-favorite guys like Bake McBride -- but rarely do I come across unopened packs of oddballs.

Ah, but the day was just getting started. 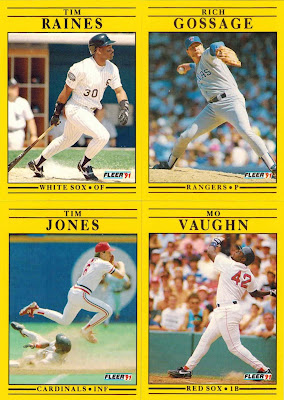 Far and away the best development of the day was the fact that, after being MIA all of last year's flea market season, my regular vendor was back!

Older readers of mine might remember him as the guy who had great stuff like this and used to cut me staggering deals like that. He did have a dime box on display -- I found a lot of stuff from it and he gave me an incredible price on the lot -- but more on that in a later post.

For now, I'll acknowledge the set of '91 Fleer Updates I got from him for a buck, a welcome sight since I'm a fan of the design (stop laughing, I'm serious) and, for whatever reason, Fleer's Update series seem to be tougher to find than others from the overproduction era. 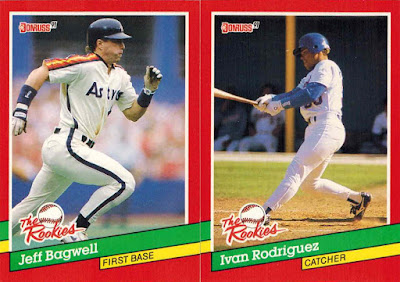 The only reason I bought so much wax last Sunday was because of a woman I stumbled upon in the first couple aisles.

Her stuff was full of a lot of non-card knick-knacks, but one of the tables she had on display was just about jam-packed with unopened '90s wax. Now, I've seen people with this sort of thing at the flea market before -- those uninformed souls who want $75 for their boxes of 1990 Topps. So you can understand why I didn't get too excited at first. But this, dear friends, was not one of those tales.

I ended up making two separate trips to her table, in fact -- the first of which saw me snag an unopened '91 Donruss Rookies set (Hall of Famers intact!) as a throw-in to the deal. 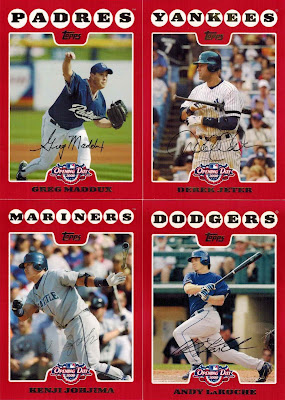 This is the lone year of Topps where I actually thought Opening Day bested the standard Flagship design (red borders rule!, and this blaster was a blast to open if for no other reason than it's been a long time since I've thought of guys like Kenji Johjima or Andy LaRoche. 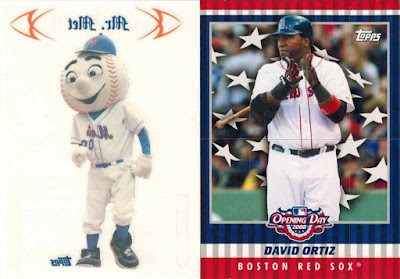 Whether we're talking 2008 or 2018, Opening Day has always been good for fun inserts, and these 22 packs (remember the days of 22-pack blasters?) held true to that. 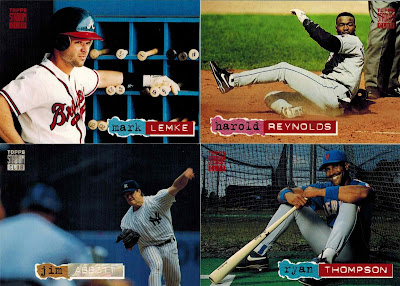 The real story of that woman's table were the multiple boxes of Stadium Club she had for the taking.

My eyes pretty much light up by the sight of Stadium Club -- any year, any time. And even though I thought the woman's $10 asking price on the box of '94 Series 2 Stadium Club was fair, I wanted to see if I could get it cheaper. So I said: could you do $8 on this? 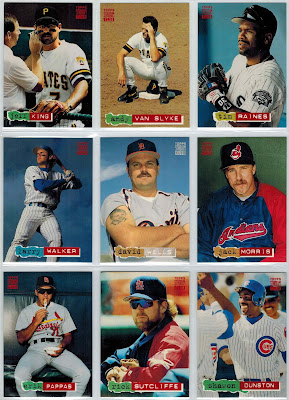 In other words, she negotiated backwards.

Apparently she just wanted the stuff gone (I got the feeling the boxes were left behind by an ex-boyfriend or -husband), so much so that she was willing to take less than what she'd priced them at and less than I'd offered. In hindsight, it was probably stupid of me to not buy both of her '94 SC boxes right then and there, but no matter -- the Series 3 box was still there when I circled back to her table later in the day.

And since '94 Stadium Club is one of the more underrepresented years of SC in my collection, I had an absolute blast discovering all the player collection needs and/or terrific shots I was able to add to my binders via this boatload of wax. 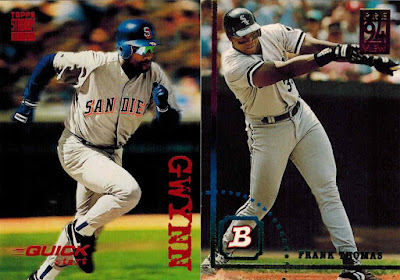 Stadium Club is and will always be a base-centric set, but inserts are always welcome as well.

The Big Hurt puzzled me at first -- why am I getting cards from 1994 Bowman in a box of Stadium Club? -- until I saw that it was actually part of a Preview insert set, which, with all the confusion and cross-branding, is a great metaphor for '90s baseball-card insanity. 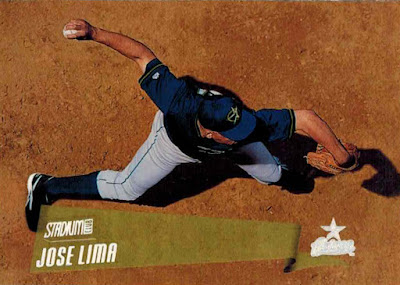 But the profound pinch-me-I'm-dreaming moment came in the form of the unopened box of 2000 Stadium Club I found at that woman's table, also for just five bucks.

I'm not sure if what I bought was an actual hobby box -- it was certainly the size of a standard box but contained just 11 packs -- but still either way it was insane to find since I'm convinced millenium-era Stadium Club just fell into a giant black hole at some point in the last fifteen years. 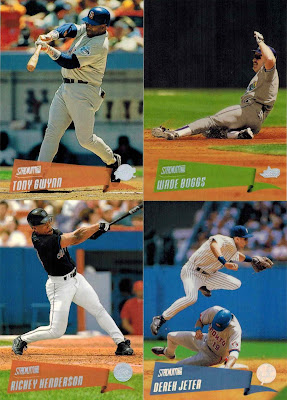 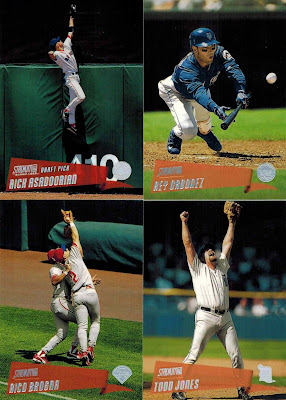 Prime examples of the fantastic photography that makes Stadium Club a legendary brand to this day. 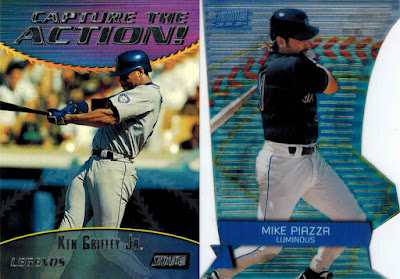 Inserts, including a desirable (and super cool) Luminous with that Mike Piazza there. 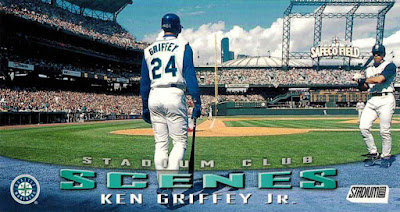 Capping off this semi-Griffey hot box -- and my day at the flea market as a whole -- was this oversized Stadium Scenes insert, which apparently came one per box.

If you've been keeping track at all, you might note that I paid a combined $17 for all the wax in this post. In other words, I got everything here for less than the cost of a blaster! Often I get down on my hands and knees and thank the cardboard gods for putting me near such a baseball-card hotbed, and with a flea market like this, you can see why.

And still we haven't gotten to all the singles I bought last Sunday, but that's another post all together...
Posted by Nick at 5:51 PM

Lovin the Lima Time!!..looking forwad to a visit to the ol' flea market with ya!

Dang Nick, those were some great finds. I could use a few of those update-type sets from the late ‘80’s and early ‘90’s, and the fact that you found them for so cheap is great. I love the Stadium Club boxes you got. Any First Day Issues?

$5 Stadium Club boxes? Wow! The Larry Walker is a keeper for sure. Beautiful card.
I wish my flee market had a card vendor.... your posts about yours always make me jealous.

Dang Nick, seriously? I call you "The Magician"for good reason!

Man there must have been wrappers everywhere!

This is a heart breaking post if the ex-boyfriend, ex-husband is reading this.

If my luck is half as good the next time I hit a flea market, I'll be very, very happy.

Looks like flea market season opened up last weekend all over the country. I attended my first flea market in months. But I failed to find any really good bargains like you. Nice haul Nick!