The boys are back in town (more from the flea market!) 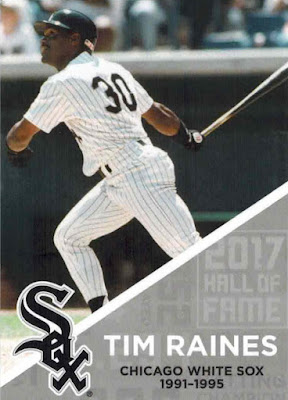 As I briefly alluded to in yesterday's post, the most welcome news I received at the flea market last weekend had nothing to do with packs or wax boxes.

No, the best part of it all was the fact that, after a year-plus absence, my favorite regular vendor was back at the flea market on Sunday. Apparently he'd been dealing with some personal problems and health issues, so his hiatus was, of course, understandable. But wow was I glad to see him back there last weekend, because no single vendor in my time of attending flea markets, card shows, etc. has provided more consistent fun than this guy.

To illustrate, I'll just say this: I bought 290 dime cards and about $3-4 worth of other miscellany off of him...and he charged me just six bucks for everything(!). 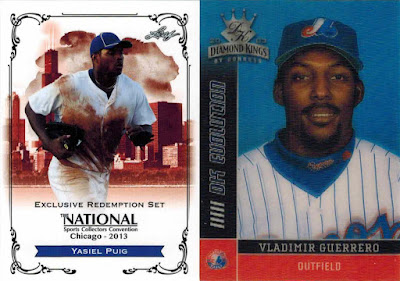 That averages out to about two cents a card.

Two cents! Two cents for the Raines at the top of this post (originally priced at a dollar), which was given out along with an accompanying SLU figure at a Sox game last year. 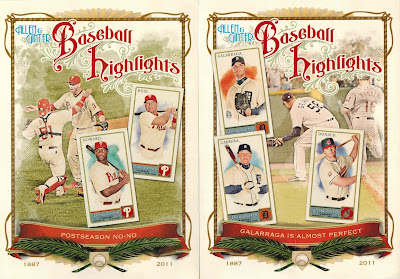 Two cents for these A&G box toppers, a deal which I just couldn't resist even though I'm not a huge fan of oversized cards (though these are obvious exceptions). 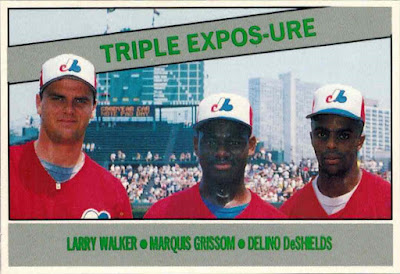 Perhaps the thing I like most about my local flea market is how genuine it is.

Most people there (especially the card vendors) aren't just looking to make a quick buck. It's not an easy gig, setting up at the flea market. The place opens at like 5 AM and lasts till one or two in the afternoon. The people who sell there do it because they enjoy it.

My regular guy, for instance, is obviously a huge baseball fan and collector: he was wearing an Expos cap and told me about going to Cooperstown to see Tim Raines's HOF induction ceremony (which would explain why he had the SLU card). 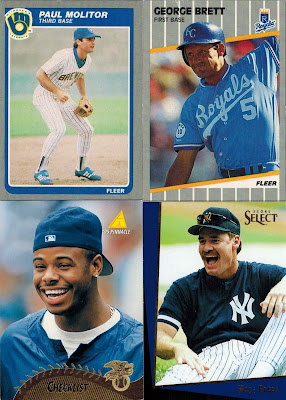 There's also the plain fact that his dime boxes are absolutely loaded -- I found 290 cards despite the fact that he only had about one-and-a-half baseball dime boxes on display.

Part of the reason I found so much stuff from him was because a lot of his dime cards featured '80s and '90s stars, which is good because I've recently started collecting a lot of guys from that period. Better yet, the stuff he had wasn't overproduced stuff -- most of it was from sets issued before and after the junk wax era (fringe wax, if that's a term?).

And don't be fooled by the Brett: it's actually a box bottom, and my regular readers should know how much I enjoy those. 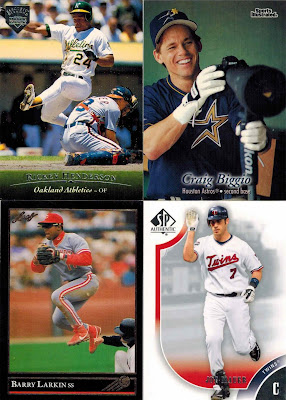 I don't know if any single vendor has added more to my mini-collections over the years than this guy. 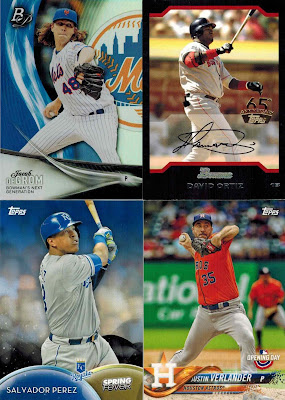 It wasn't all '80s and '90s stuff, though: his dime boxes contained a good helping of more recent material to tide me over as well. 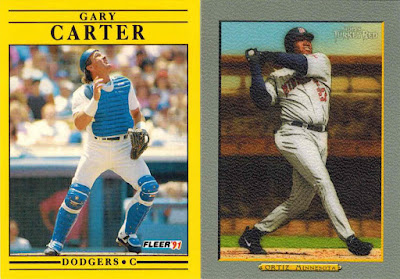 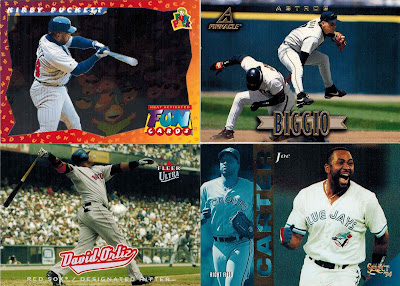 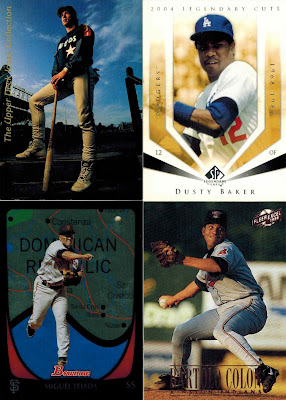 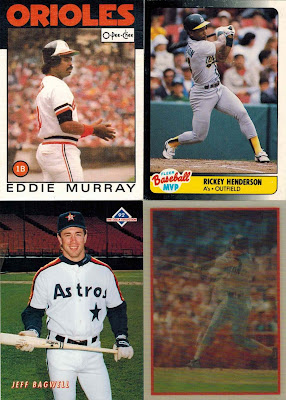 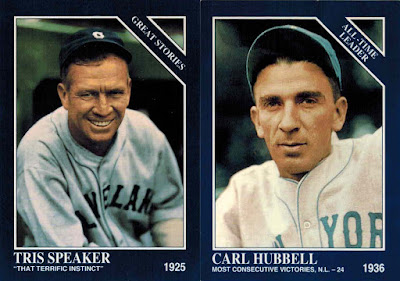 I could go on and on and on about all the great cards I found from my regular vendor, and how happy I was to see him back and sitting behind his table last weekend.

For now, though, I'll leave off with these two colorized Conlons from the dime box, which please excuse me for a minute while I bask in the glory of these. 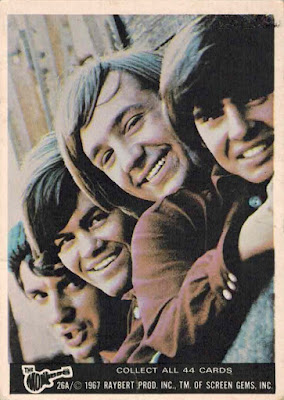 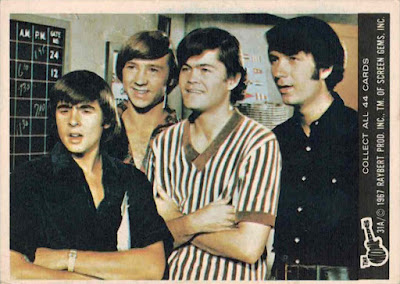 The Penny Box Guy was back in action on Sunday as well, although he didn't have his penny boxes.

He did, however, have a couple dollar boxes on display -- I didn't find much baseball of note, but I did manage to add a couple terrific Monkees cards to my music collection. 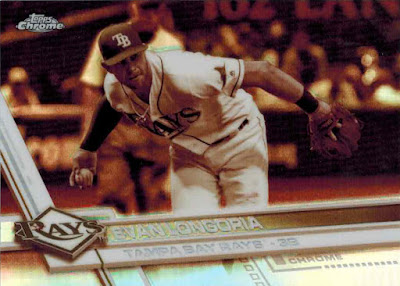 I mainly frequented the table of one regular guy at the flea market last year, and he was back in town last weekend as well.

What I like about him is that his inventory changes week to week, which is great because, from personal experience, I can tell you it gets demoralizing seeing the same vendors with the same cards time after time. 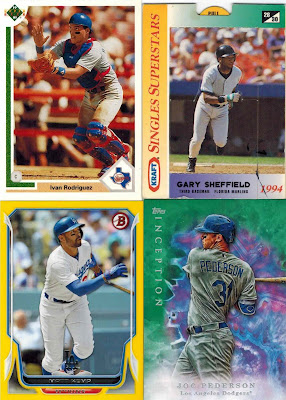 His prices also vary from week to week, depending on what kind of stuff he has on display.

No dime boxes this time, but his quarter boxes proved quite bountiful last week -- in addition to the Longoria sepia refractor came this quartet, including a HOF rookie and a nifty yellow-bordered Matt Kemp numbered to 99 copies. 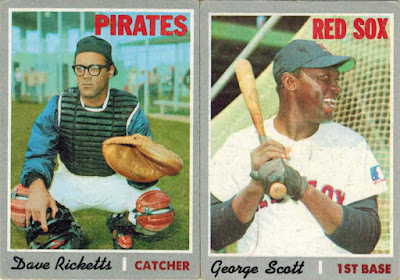 No huge names this time around, but I did find these two under-the-radar beauties from '70 Topps, including the infamously spectacled Dave Ricketts. 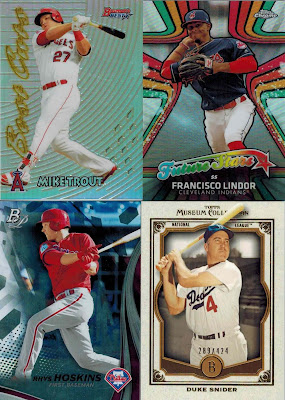 The guy's 50-cent boxes weren't half bad, either -- tough to beat a Mike Trout refractor or Rhys Hoskins rookie insert at that price. 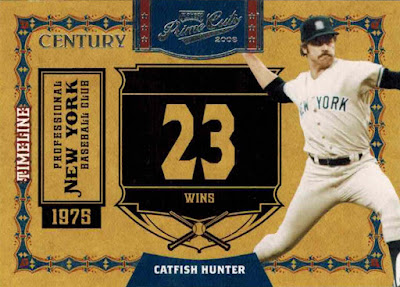 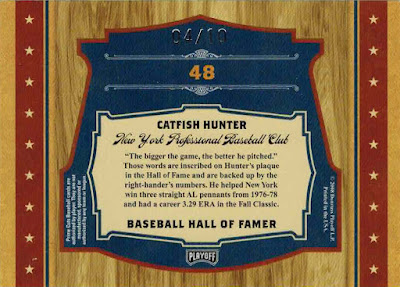 But perhaps the most curious vendor of the day ended up being a guy I'd never seen before.

The guy was obviously a collector and/or dealer: he had a big dollar box full of numbered cards and refractors (mostly rookies in which I found nothing of note). His other box was priced at $3 each or 2/$5, and a quick flip through it revealed a lot of stuff which was barely dime box material, if that.

But then I found stuff like this Catfish Hunter insert, limited to an extremely scarce 10 copies, mixed in with all the other overpriced junk. 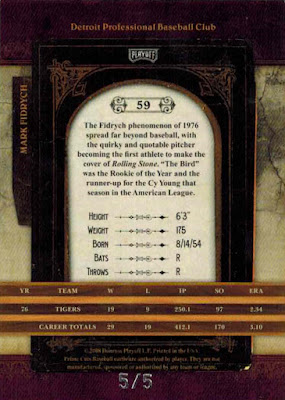 Normally I wouldn't have even bought the Catfish, but I figured I might as well get the 2/$5 deal, because I knew this Mark Fidrych -- numbered to FIVE COPIES! -- was coming home with me.

Like I said, it was a weird mix, probably as odd of a box as I've ever seen. Random 2008 Upper Deck and 2012 Topps base singles mixed in with Catfishes limited to ten copies and Birds numbered to five. Somehow it perfectly sums up the flea market, I think: unbelievable stuff hidden within unremarkable fodder.

If my first week's haul is any indication, I think I'm in for quite the fun flea market season here in 2018.
Posted by Nick at 6:12 PM

That Raines, is calling out to me.

Love the Monkees and the Bird!

I was all the Buzz over the 91 Carter but come on - $2.50 for the Bird and 'Fish? Does this dealer have poor eyesight?

Okay, I realllllllllyyyyyyy need to make it to this flea market - holy cow! That Raines SLU oddball is phenomenal and I had no idea the figure revival also included cards. Wowza.

Great cards all around, but is it terrible that the Monkees are m y favorites? I really need to get some of those...

I was excited to find dime cards at my flea market last weekend. But 2¢ cards are 5x cooler than dime cards. And that Fidrych #'d to 5 is an awesome find! Sweet haul!

Fntastic finds! I'm partial to the Papi singles (especially the Bowman buyback) but you can't beat those low #d gems. Or a Trout refractor.

Quite an enjoyable read for these two posts...congrats on the haul!